The Castle of Belalcázar has the honour of being the highest castle in all of Spain thanks to the 47 metres of its keep. It is located in the town of the same name in the province of Córdoba within the Autonomous Community of Andalusia. Its situation, totally strategic, is in the middle of a road between Toledo, and Seville and Cordoba. This imposing fortification of Gothic-military style is also known as the castle of the Sotomayor and Zúñiga, of Gafiq or of Gahete. Names that tell the story of these ancient remains. 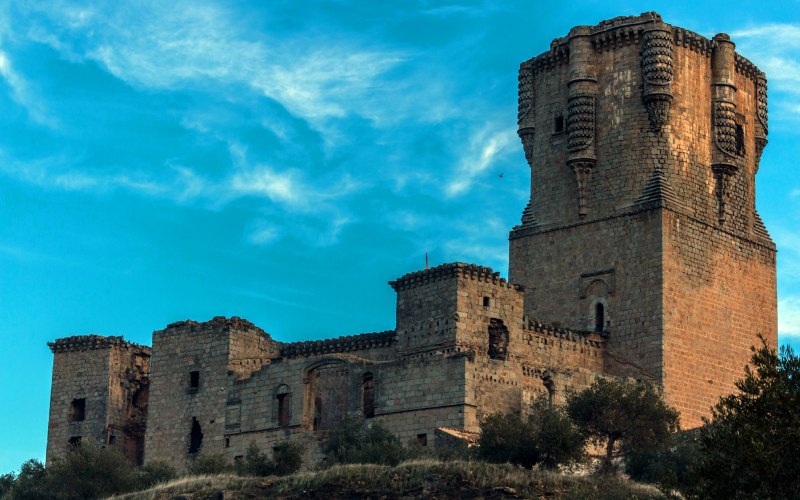 The keep is the focus of attention at Belalcázar Castle. | Shutterstock

The origins of Belalcázar Castle

Built on a land where there was already a Roman and later a Muslim fortress, this castle belonged to the family of Sotomayor and Zúñiga, Counts of Belalcázar and feudal lords. The first information places here the ancient Roman town of Solia. Later, the Arabs mentioned the ancient capital of Fahs al-Ballut (Llano de las Bellotas); one of the most important towns of Al-Andalus. This place was called Gafiq by the Christians, who feared the fierceness of its inhabitants. Together with the castles of Capilla and Madroñiz, it was a bastion of the Muslims in the north of Córdoba. 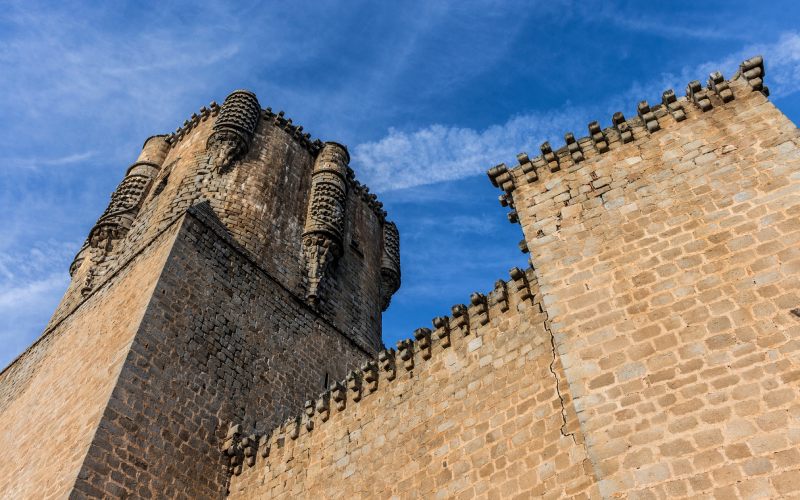 View of the Belalcázar keep from below. | Shutterstock

In 1236 the castle became the property of the King of Castile and León, Ferdinand III, who changed its name to Gahet. The current construction dates back to 1450, when John II granted the lands to Gutierre de Sotomayor, Master of the Order of Alcantara, in gratitude for his services. On his death the fortress passed into the hands of his first-born son, Don Alonso de Sotomayor, who married Doña Elvira de Zúñiga, granddaughter of the Count of Ledesma. Once the “reconquest” was over, a Renaissance style palatial area was added in the 16th century and its function became residential. 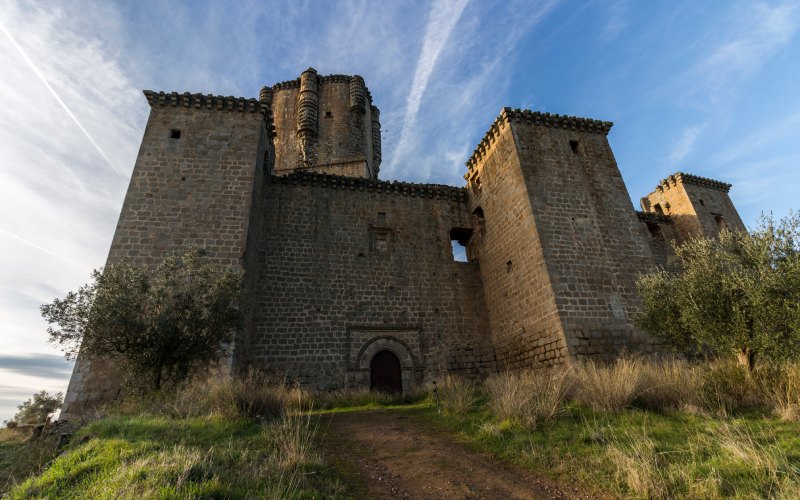 An entrance to Belalcázar Castle. | Shutterstock

Its decline began with the occupation by French troops during the War of Independence. In 1811 an English division laid siege to the castle and caused significant damage by artillery fire. The villagers, fearing greater evils, asked the Countess of Belalcázar to have the towers of the fortress dismantled. A large part of the materials that had been plundered were used for the construction and decoration of some of the houses in the village.

Located inside the primitive citadel, the castle tops the hill and dominates the plain. With a square floor plan and eight square towers, the keep is the tallest. It is 17 metres long and 47 metres high. Thanks to this, it is the tallest in all of Spain, giving an imposing and even disproportionate feeling.

The first two thirds are square and from there it has rounded edges. It is possible to observe some elements similar to those of the tower of San Nicolás de la Villa in Córdoba; such as the half pyramids in the corners. In the upper part there are eight sentry boxes decorated with the coat of arms of the Sotomayor surname. Elegant windows and a balcony complete the design, which would give light to the rooms inside. 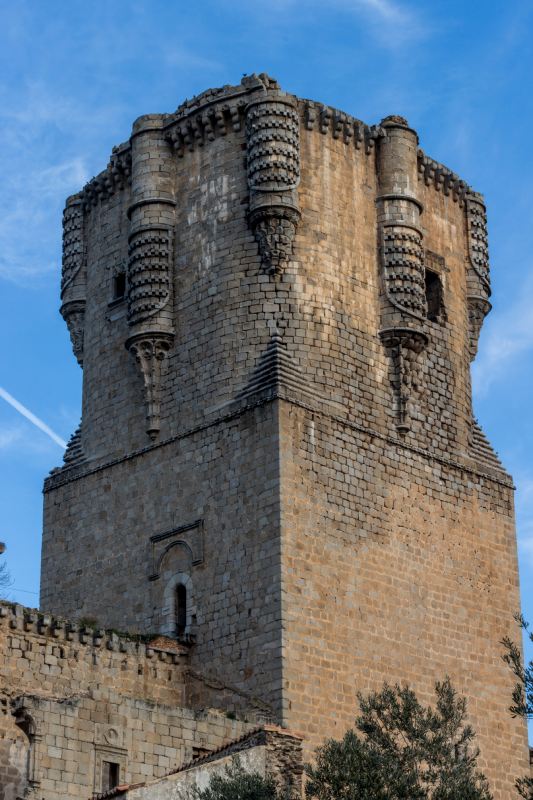 Keep of the castle of Belalcázar. | Shutterstock

With a total of six floors, the fourth and fifth still have their vaulted roof, remains of coats of arms and walls of considerable thickness. These give an idea of the impression this construction must have caused among its contemporaries. Moreover, in case of an attack it offered the last refuge. Its name, common to all medieval castles, comes from the fact that it was the place where the homage ceremony was held. In this, the lord gave his vassal a fief in exchange for auxilium et consilium. That is to say, military aid and political advice. In its Renaissance aspect, as has been said, it served as a residence. 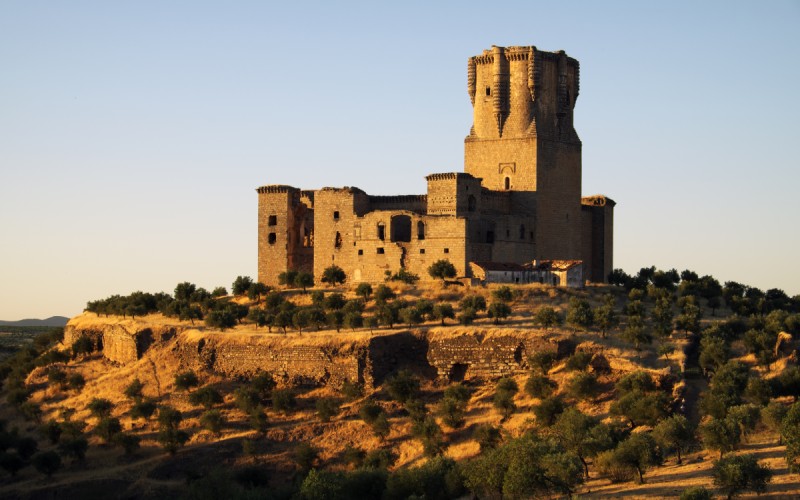 The tourist side of Belalcázar Castle

There are still remains of the Muslim construction and also the presence of a large moat that possibly surrounded the entire construction. A magnificent parade ground and a large dungeon credit its past as a medieval fortress. It is important to highlight the magnificent conservation of the granite ashlars of the country; in which it is possible to observe the marks of the stonemasons. These historical “graffiti” allow us to know the origin and provenance of the workers who built it.

The castle has a single door with a semi-circular arch and a blue jasper stone slab above it. The name of Bel Alcázar is due to the impressive keep. Its construction affected the local history so much that it caused the name of the village to be changed. The state of conservation on the outside contrasts with that of the interior, which is truly deplorable. Most of the coffered ceilings are not in place. Moreover, most of them were moved at the end of the 19th century to the house of Don Manuel Gallego, the proxy and administrator of the Marquise of Casariego, owner of the fortress. 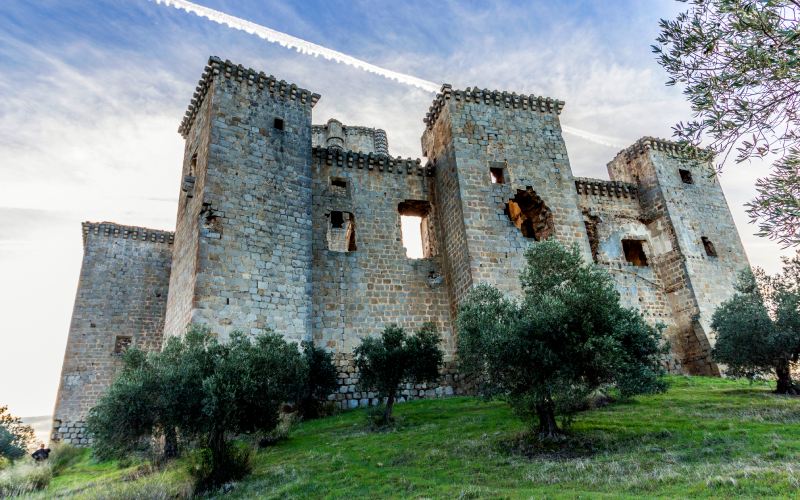 Perimeter towers of the castle of Belalcázar. | Shutterstock

Among its anecdotes, the history of the first Count of Belalcázar, Don Gutierre, stands out. Despite having taken a vow of chastity, he had countless lovers and, of course, many descendants. The non-fulfilment of his vows did not prevent the pontiff from legalizing his situation. Not in vain did he greatly enhance the prestige and military greatness of the Order of Alcantara.

On the other hand, Cervantes dedicated Don Quixote to the VIII Count of Belalcázar and VII Duke of Bejar; calling him Count of Benalcázar. As it happens in many documents of that time, he changed the prefix “bel” for the incorrect “ben”. One more honour for this building, which was declared a Property of Cultural Interest in 1985 and is owned by the Andalusian Government. The restoration works in 2018 have allowed it to be a very interesting complement to other buildings of Arab origin, such as Burgalimar in Baños de la Encina or Gormaz in Soria.

Andalusia, castles, Córdoba, Middle Ages, walls
It may interest you...