Andalusia is characterised by its varied cuisine, with notable differences between the coastal and inland provinces. In general, typical Andalusian dishes are closely linked to olive oil, nuts, fish, meat and vegetable garden products. Furthermore, the fact that the region has a past linked to Moorish culture means that its recipes also have a notable Andalusí influence, with the frequent use of almonds being particularly noteworthy. Below, we invite you to discover some of the typical Andalusian dishes on a journey through each province. 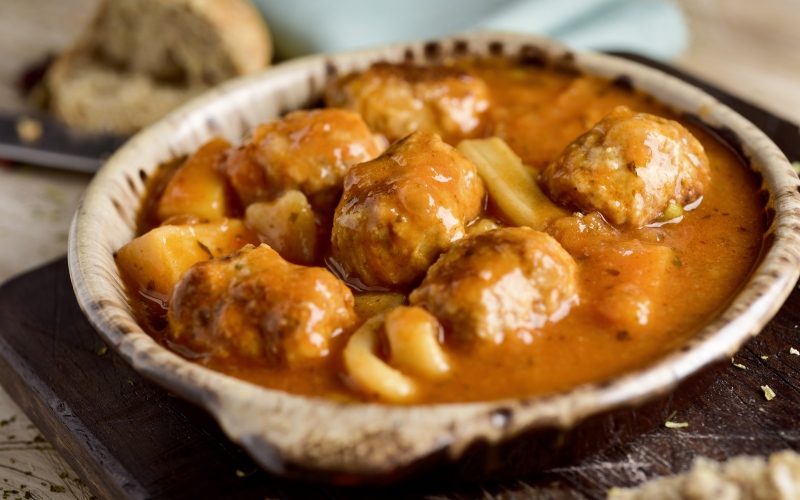 This recipe for albóndigas de choco is typical of Huelva and other areas of the Costa de la Luz. There, the dishes containing choco, jibia or, in other words, cuttlefish are very typical; you can find this ingredient in most of the bars and restaurants in the area. In fact, choco is so deeply rooted in this province that it has a saying: “You are more from Huelva than a choco”. Choco fishballs consist of a ball made of choco, egg, parsley, breadcrumbs and garlic. In addition, the fishballs are accompanied by a delicious sauce for which not many ingredients are needed.

Here is the recipe for Albóndigas de Choco 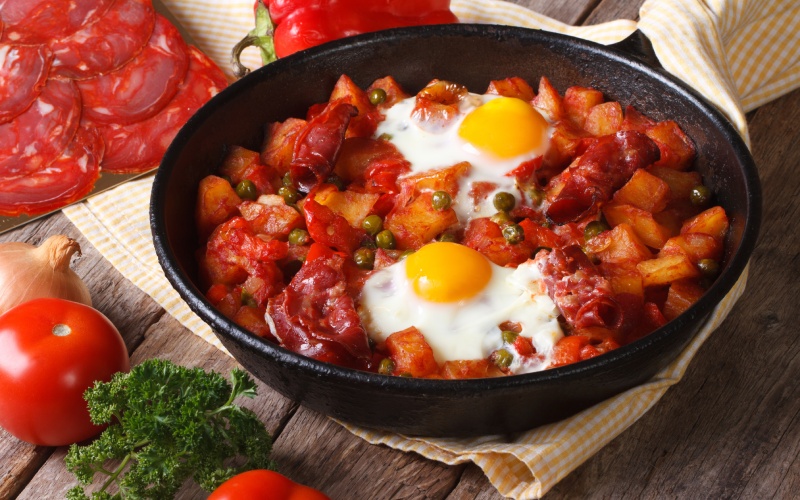 Huevos a la flamenca is a typical dish from Seville, which comes from the Sevillian bars that combined vegetables and sausages with an egg baked in the oven. Its popularity has made it a typical Andalusian dish, as it can be found in the other Andalusian capitals. It is a very versatile dish, as there is not a unique recipe and many ingredients can be added. However, what cannot be missing is a base of tomato, eggs, peas and Serrano ham or chorizo to give it that reddish touch that makes it receive its flamenco touch in the name.

Here is the recipe for Huevos a la Flamenca 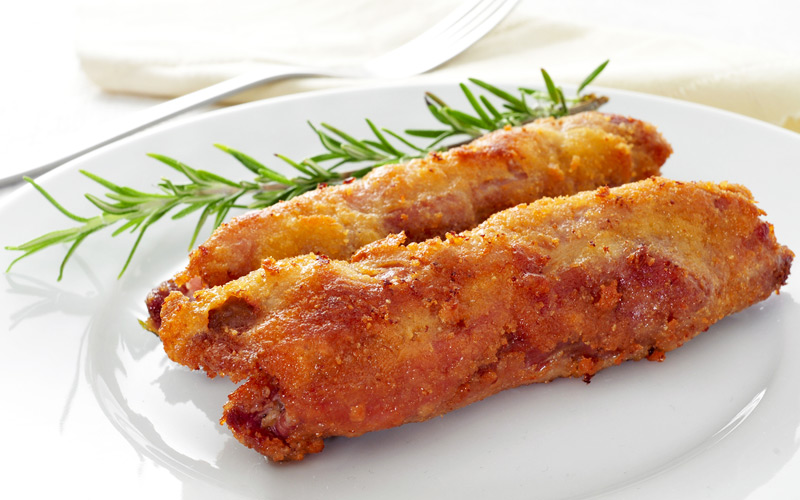 Flamenquín is a typical dish from Córdoba that comes specifically from the town of Bujalance. The origin of this typical Andalusian dish, which has spread throughout Spain, dates back to the first Christians who lived in the town. It is a historical recipe with many properties, as it combines fresh and cured meat, eggs, bread and olive oil. Thus, the quintessential Flamenquín Cordobés has pork loin, Serrano ham, bread and flour. Its shape is characteristic, as it consists of pieces of Serrano ham rolled up in strips of loin, all battered in bread. It is also thought to be called flamenquín because of its stiff and flamenco-like appearance.

Here is the recipe for Flamenquín Cordobés 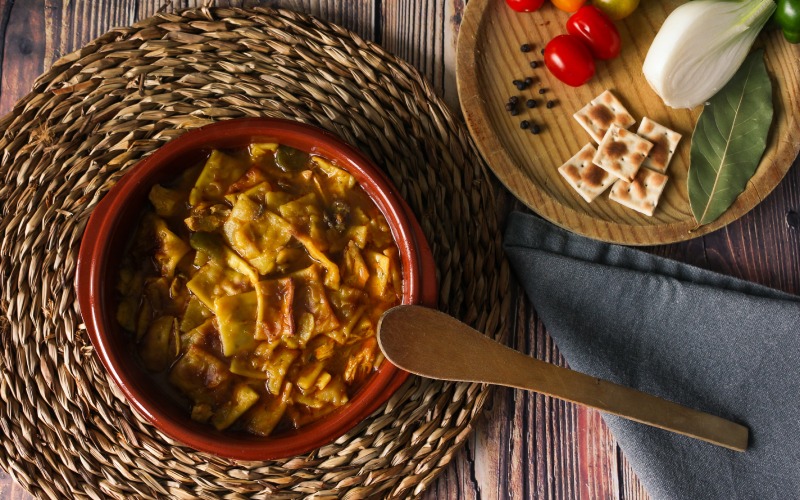 Galianos are a shepherd’s stew, traditional of the Jaén mountains that border the provinces of Ciudad Real and Albacete. For this reason, it is a typical Andalusian dish and also from Castile-La Mancha. Its name comes from the galiana (path where the livestock circulates), as grazing was the main source of livelihood and galianos was the dish that shepherds ate during the long transhumance journeys. This also explains why the main ingredient is torta de pastor or galianera and the meat is rabbit, hare or chicken. All this is accompanied by a sofrito which is what gives the flavour to the torta de pastor.

Here is the recipe for Galianos 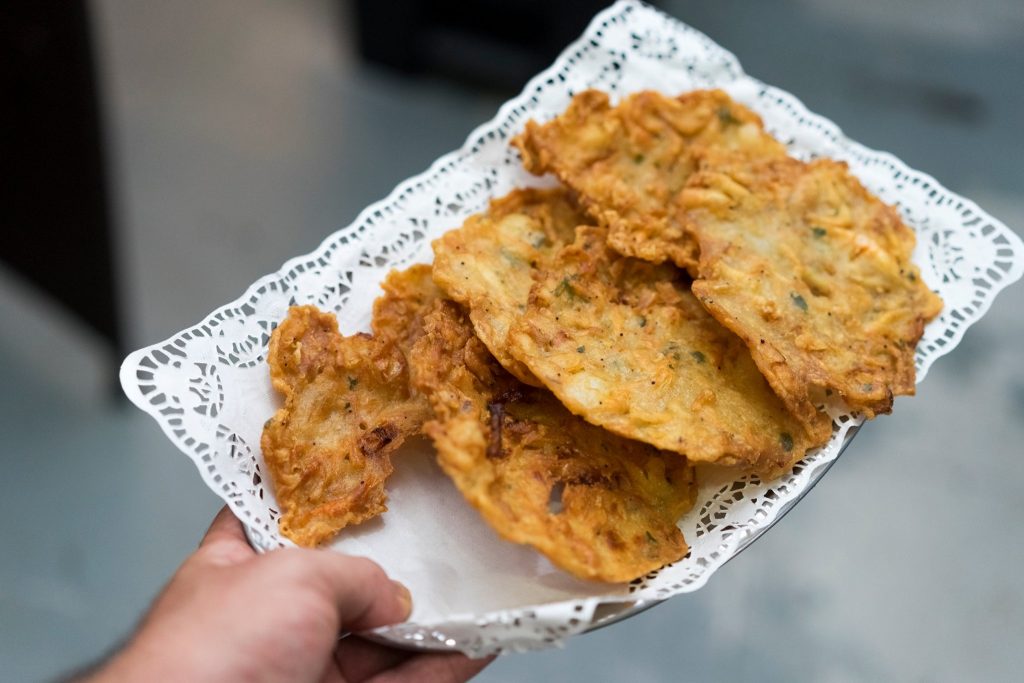 Tortillitas de camarones are a traditional Cádiz dish that is served as a tapa throughout the year, although it is more typical at Carnival. The recipe consists of a thin, crispy flatbread made with chickpea flour, wheat flour, onion, shrimp and parsley, mainly. Although it is not known for sure when this typical Andalusian dish appeared, some claim that it comes from the 13th century (from the Italian influence through the use of chickpea flour) and others say that it is from the 16th or 17th century. What is clear is that it originated in the town of San Fernando.

Here is the recipe for Tortillitas de Camarones 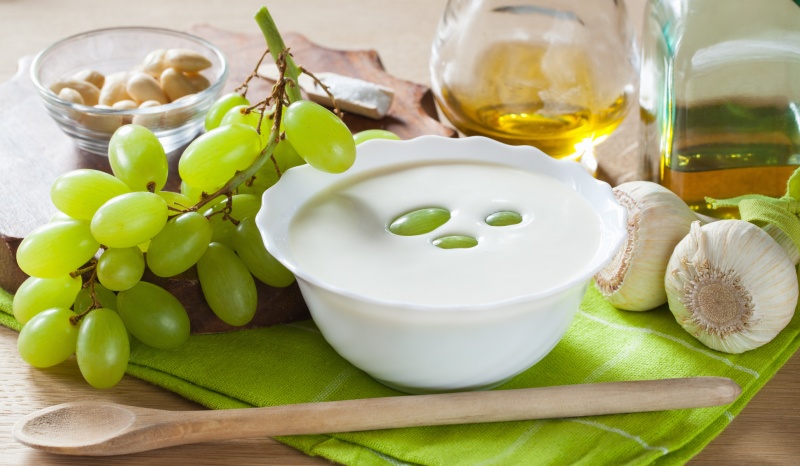 Ajoblanco is a cold soup typical of Málaga, specifically of Almáchar. Every September, coinciding with the grape harvest, this municipality holds a festival in honour of this dish. For this reason, it is traditional to serve ajoblanco with grapes there. However, as it is a typical Andalusian dish it has many variations depending on the province. The ingredients that cannot be missing are breadcrumbs, almonds, garlic, olive oil, water and salt. Furthermore, it is said that ajoblanco is the ancestor of gazpacho, since its preparation comes from al-Andalus and gazpacho did not appear until the arrival of the tomato from America.

Here is the recipe for Ajoblanco 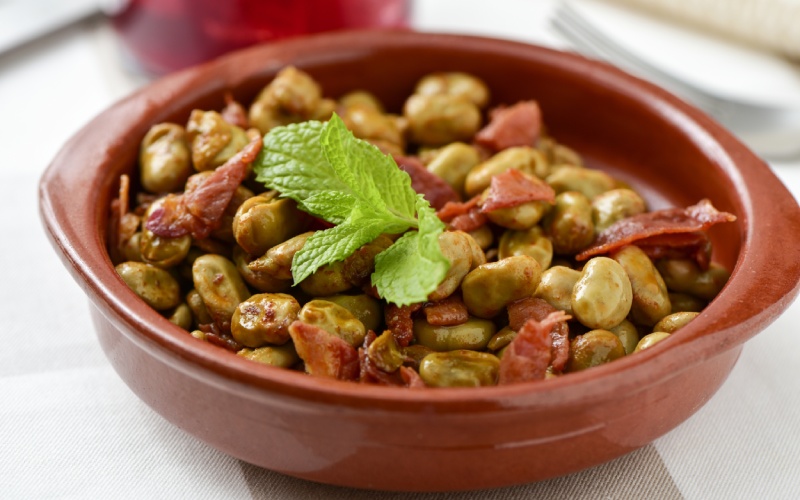 Broad beans with Serrano ham are a very easy and typical recipe from Granada. In the months of April and May, when the beans are harvested, the vegetable gardens are filled with this product. Thus, it is the perfect product to create a very complete dish, with few ingredients and very quick to make. Together with onion, garlic and Serrano ham, broad beans are full of flavour. Furthermore, this typical Andalusian dish allows us to take advantage of its simplicity to choose quality products such as fresh broad beans from the Vega de Granada or a good extra virgin olive oil; a star product in Andalusia, where it has several designations of origin.

Here is the recipe for Habas con Jamón 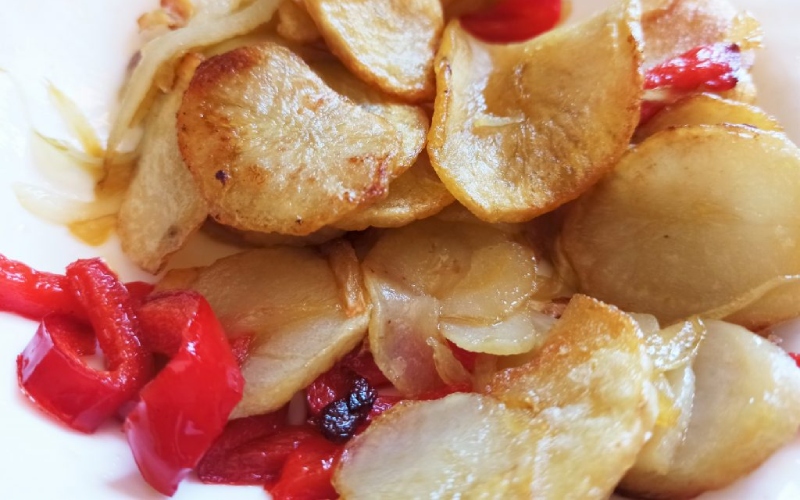 Patatas a lo pobre are one of the basic recipes of the province of Almería. Although it is now a popular recipe in other Andalusian provinces and even throughout Spain, its humble origins come from the province of Almería. It is a recipe that arose as a result of the traditional cuisine used in times of famine and which has reached our days being a very simple and affordable dish to prepare. The mixture of potatoes, onions and peppers makes this typical Andalusian dish a perfect accompaniment for meat or fish.

Here is the recipe for Patatas a lo Pobre

meat, Spanish traditional cuisine, tapas, vegetables
It may interest you...