Surrounded by huge sandy areas and marshlands, Cádiz is a key spot for trades and dealings with America. Along as a target for pirates and the birthplace to the first Spanish Constitution. To explore this town you we will provide you a guide to Cádiz.

Plan your stay in Cádiz

There are many of places to see and things to do in Cádiz. A city with numerous spots to wander through, as well as fantastic sea views and magnificent architecture. You can spend two or more days walking through enjoying the sites, for this  you will need a guide to Cádiz. Apart from enjoying Cádiz’ wonderful beaches, we highly recommend going through the Bay of Cádiz Natural Park. Nearby, the San Fernando and the Santa María Port can be visited by car or head north to Jerez de la Frontera and Chipiona. Gastronomy in Cádiz is a very important to get to know. We provide this Guide to Cádiz to have a wonderful stay in this marvelous city.

To start, one must visit the fortress of the city. Old town can be accessed by Puertas de Tierra. These were built in the 18th century when Cádiz was one of the most thriving cities in the country. Nearby, do not miss the San Sebastían Castle (bridges and moats).

What to see in Cádiz

A must on our Guide to Cádiz, the Santa Catalina Castle. Built after the British sacking in 1596 to fortify the region. A century later, Carlos II fostered the construction of the chapel to replace the former castle.

On the street Marqués del Real Tesoro, the Tavira Tower (18th century) stands out in its magnificent mansion of the Marquesses of Recaño. This place allows you to enjoy the outside of the tower in the installation of the Dark Room inside the building.

The Salazones Old Factory (1st century B.C.), in Sacramento Street, functioned for at least half a millennium. You can imagine the working process operating at the time. On our next stop, there is a Roman Theater located in an area known as El Pópulo. Also, the deposit of the Bishop’s House (16th century), previously a temple where Roman established the bases of a primitive sanctuary. This stop on the Guide to Cádiz is from the Phoenician period in the 8th century B.C.

The Cádiz Museum, situated in the Mina Plaza is full of pieces from the ancient sites mentioned above. Pinillos House made it possible to enlarge the museum and the Santa Cruz Church was the cathedral of the city from the 8th century to 1838. It was later replaced by the present big temple, there are just a few remains left from the old cathedral. In our Guide to Cádiz we encourage you to enjoy the chapels from the 17th and 18th century, as well as the altarpiece. On the outside, the bell tower is one you must not miss. 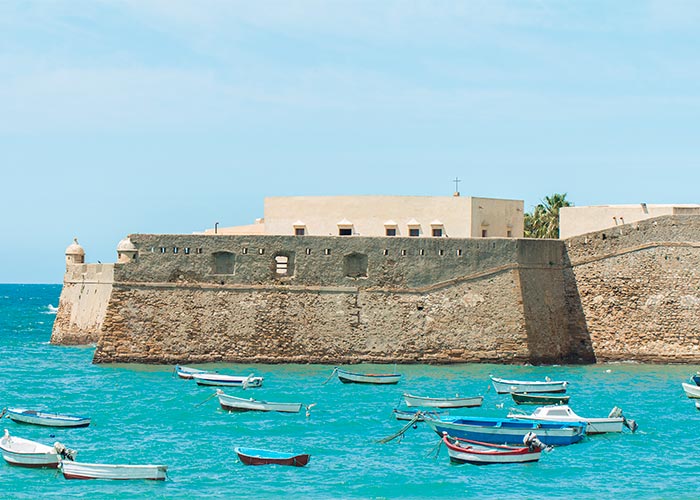 A thriving economic situation im Cádiz (18th century),  led to the construction of Cádiz Cathedral outside the city. First built in a Rococó style, then changed to Neoclassical style in 1853. Interior holds the Main Chapel and Asunción Chapel. The Cathedral museum mingles Gothic and Baroque styles in it´s construction. Up on the seventy-meter tall Setting Tower (19th century), you may enjoy a panoramic view of the city.

For history lovers. In this guide to Cádiz, do not forget to visit the Interpretation Center of the 1812’s Constitution and the Monument to the 1812’s Cádiz Cortes. Visit this last one to fully understand the information and materials already obtained from the Cádiz Cortes Museum. Conveniently located in the same street you can learn about the city in the 18th century.

Follow this guide to Cádiz and get to know the wonders that Spain has to offer.