Santa Bárbara Castle is a medieval fortress located on Mount Benacantil, the most strategic point of the city of Alicante, raised 166 metres from Postiguet beach. Until not long ago, if someone wanted to call himself the owner of the Levante, he had to run the risk of facing its imposing walls, which have now become a peaceful and beautiful viewpoint from which one can enjoy one of the best views of the Mediterranean.

The more than one thousand years of life that the Santa Bárbara castle possesses hide an exciting history of crossroads between kingdoms and cultures, being the scene of important episodes in times of the Reconquest and also during the War of Succession. In 1961 it was declared a National Historical Monument. 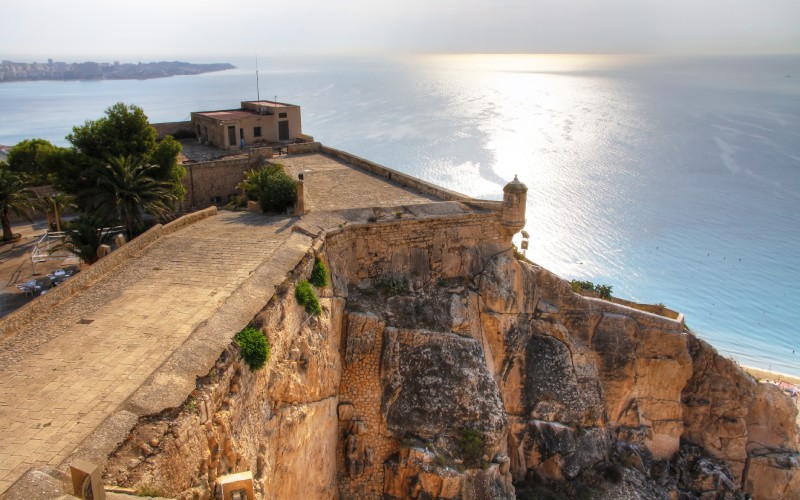 Today you can visit and tour the various enclosures that make up the museum, which are divided according to the period of domination: one part Islamic, another Christian-Muslim, followed by the Renaissance and the more recent 17th and 19th century. However, the current appearance of the fortress was acquired from the reign of Philip II; when many of its rooms were built, some of which are now home to the city museum.

Mount Benacantil has a strategic location of great value, as it dominates the entire plain of the Bay of Alicante. This is perhaps why it was chosen by all the cultures that passed through these lands for their settlement, as archaeological remains from the Bronze Age and the Roman period were found at the top of the slope. However, the first description of the Santa Bárbara Castle is from the Islamic period and dates back to the end of the 9th and beginning of the 10th century. The castle construction may have been a defence system due to the Fatimids in Egypt military growth; who were beginning to extend their authority along the eastern coast. 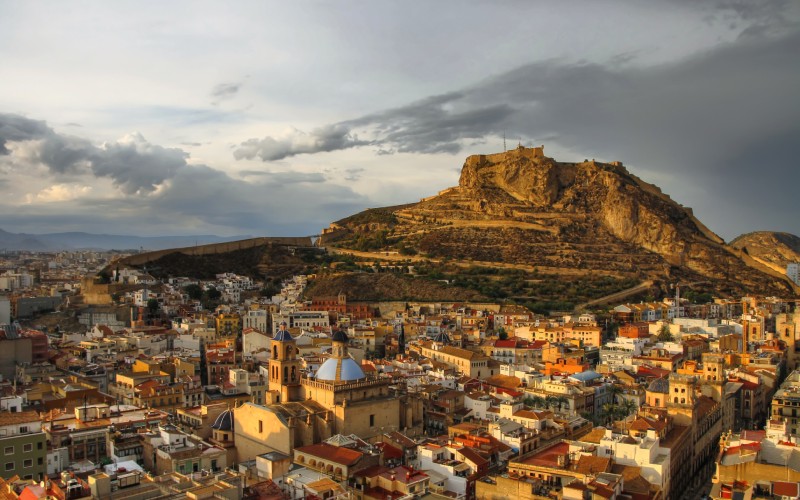 The current name of the fortress, however, came about after the end of the Islamic occupation of the Levante lands. It was when the Castilian infant, future Alfonso X the Wise, conquered the city of Alicante on December 4, 1248; the day of the Santa Bárbara’s patron saint.

The two waves of the Reconquest, the Castilian and the Catalan-Aragonese, converged in this area of the Levante. In this way, a few years after the domination of Castile, the pressure from the north intervened and Jaume II took the castle, passing those lands to the hands of the Crown of Aragon and its subsequent incorporation into the Kingdom of Valencia, in 1308. This occupation was not only military, but also cultural and linguistic; as Alicante was the last stronghold of Catalan-Valencian on the coast. 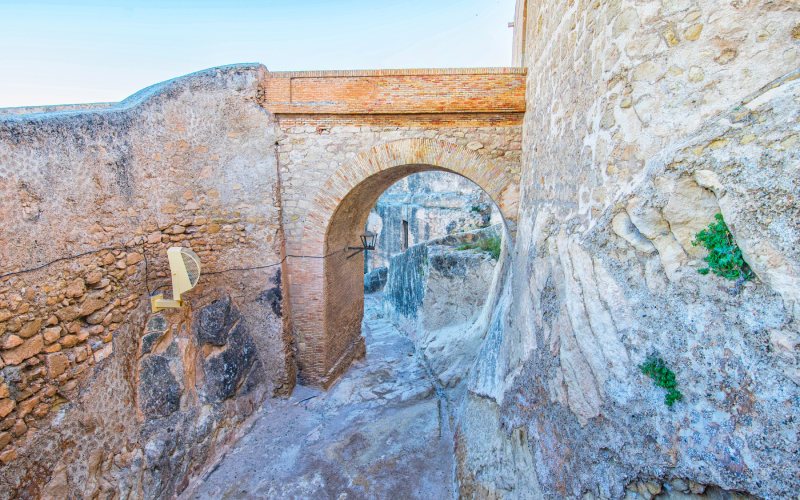 Part of the interior of Santa Bárbara Castle | Shutterstock

Despite Christian authority, the fortress maintained its Islamic structure until the arrival of King Peter IV the Ceremonious and the Castilian-Aragonese war of the “Dos Pedros”, whose origin was precisely the claim of the Crown of Castile of Alicante’s central-southern lands. As it could not be otherwise, the walls of the castle suffered significant damage; so abundant repair work had to be carried out in order to adapt to the new forms of fighting. These repairs continued during the 15th century, giving it a typical medieval style with a new walled front.

The site from this period is known as “La Torreta“, as it is the site of the old Keep, whose foundations contain stones from the original Muslim fortress. In this enclosure, the oldest remains of the entire fortress are preserved, dating from the 11th and 12th centuries.  In this first part you can also see Baluarte de los Ingleses and Casa del Gobernador, as well as the “Macho del Castillo“; which is the highest plain and where the old citadel used to be. From there you can enjoy the most spectacular views of the city.

The modern era would be a real washout for the Santa Bárbara Castle, not only because of the complete and interesting remodelling of its walls in the time of Philip II, but also because of the damage it would suffer after the mine explosion during the War of Succession. 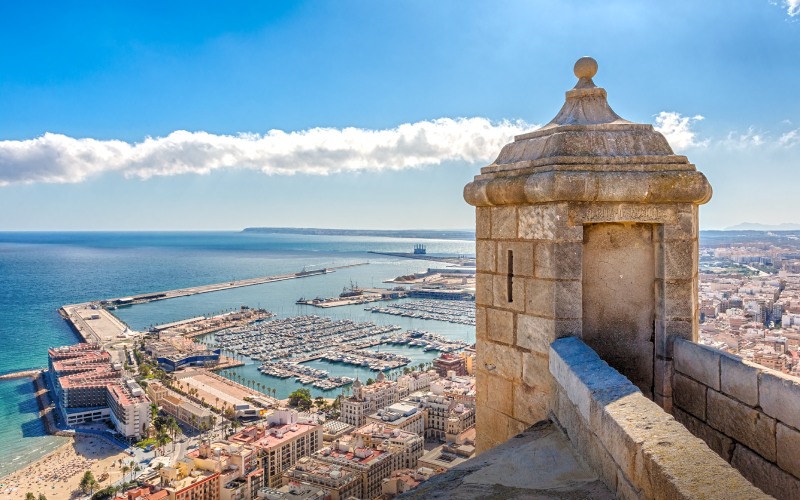 Views of the port of Alicante from Santa Bárbara Castle | Shutterstock

Although Charles I had ordered the fortification of the city and the castle at the beginning of the 16th century; it was not until the reign of Philip II that the most important reform of the Castle was carried out. The monarch converted the fortress into a Renaissance military structure, directly affecting the medieval defensive structure. Amongst all the works in the intermediate area, the Felipe II Hall, a wall that falls in front of the sea, the Gran Tenaza, and the Baluarte de la Reina and the Santa Ana as a new defence system, stand out.

Explosion of the mine

The dramatic episode experienced by the Santa Bárbara Castle and Alicante took place during the War of Succession (1706-1709); when Philip V and Archduke Charles were disputing the Spanish throne. The fortress experienced one of the worst moments in its history, especially when the mine exploded. At the beginning of the conflict, English ships led by Archduke Charles bombarded Alicante until they took it over. It is said that the castle served as a refuge for many of the inhabitants. It took more than two years for the Borbón to recover the city; at which point the most critical event of the entire conflict occurred.

Faced with the difficulty of getting the English out of the castle, Philip V ordered a mine full of gunpowder to be excavated in the depths of Mount Benacantil; which he blew up on March 4, 1709. Many of the castle’s buildings were buried under the rubble, such as the governor’s house and the bastion. With the taking of Santa Bárbara Castle, Philip V of Bourbon recovered the last place in Valencian territory that had been under enemy rule. 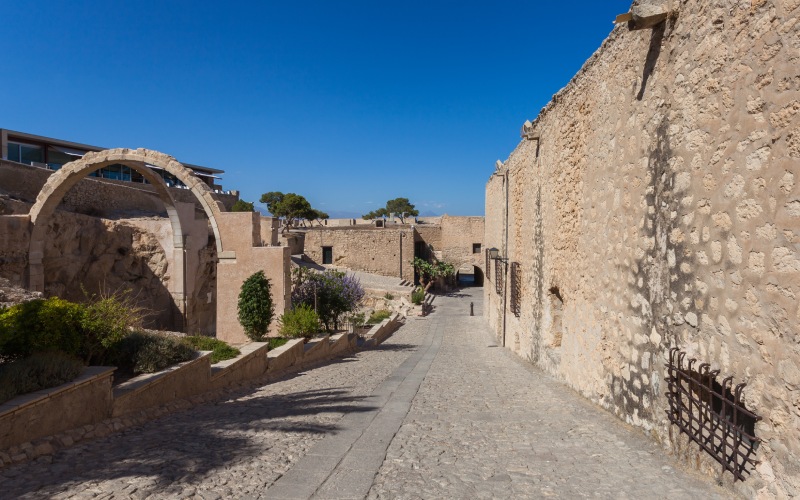 Part of the interior of Santa Bárbara Castle | Wikimedia

The city would not experience another conflict like this until the War of Independence against Napoleon; already in the 19th century. Fearing another invasion, Alicante decided to complement the city’s defensive system with a new castle; San Fernando, in 1813. For their fortune, it never came into service, as Alicante managed to resist and not fall under French rule.

The lower part of the castle, which dates from the 18th century, corresponds to this historical part. It is here that the “Revellín del Bon Repós” is located, where various exhibitions are currently held.

The Military Prison of Santa Bárbara

From the 19th century onwards, Santa Bárbara Castle gradually lost the military importance that had characterised it since the most remote times, becoming a military prison. Its dungeons housed anonymous people and the occasional historical figure, such as General Juan Prim.

Castle of Alicante in 1875 | Wikimedia

The castle was able to experience its last military defence in 1873, when rebels from Cartagena tried to take the city from the Bay of Alicante during the First Republic. The people of Alicante, organised by Eleuterio Maisonnave, defended the city from the port and the castle with success. Years later, in 1893, the Government would withdraw the artillery from the Santa Bárbara Castle; considering that it no longer offered any tactical interest.

Later, in 1919, it became a kind of hospital for cholera patients and some beggars. However, time lead to the recovery of the castle as prison during the civil war and the post-war period; being used as a place of detention by Franco’s troops.

The Legend of Cara del Moro (Face of the Moor)

Its remarkable past is also accompanied by other traditions and popular stories; which continue to attract the interest of all who listen to them. The most popular of all is the legend of Cara del Moro (“The Face of the Moor”); a love story that names the slope of Mount Benacantil. 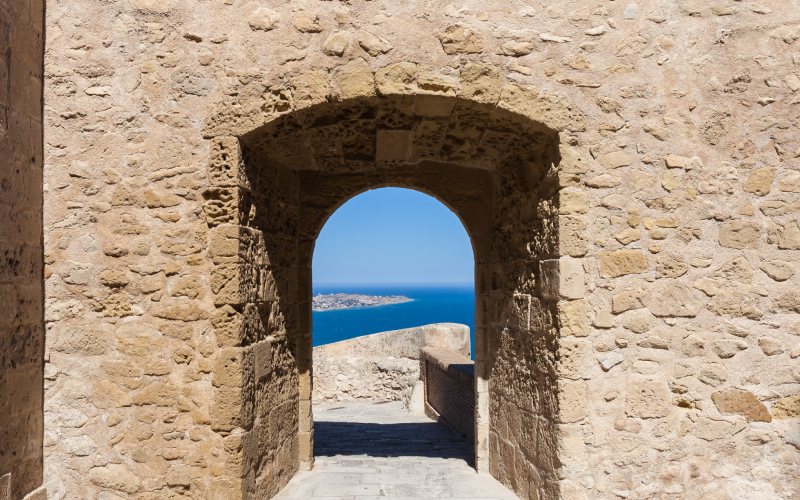 One of the castle gates overlooking the sea | Wikimedia

Legend has it that when Alicante’s lands were under Muslim rule, the city was governed by an Arab caliph. Of all his offspring, he had a great predilection for his daughter Cántara, who stood out for her great beauty. When the young woman came of age, the caliph decided to marry her off. Among the many suitors who presented themselves, only two won the father’s approval: the Córdoba general Almanzor and a young nobleman called Alí.

When faced with the doubt of who to choose between the two candidates, the Caliph decided that his daughter’s charms would only correspond to the one who knew how to court her best. Without thinking twice, Almanzor ran to India in search of the best silks and spices. Instead, the humble and kindly Alí decided to open a channel that would carry water from the municipality .

When Almanzor returned from his trip loaded with gifts for the princess, the caliph was so enchanted that he decided to give his daughter’s hand to the general of Córdoba. This heartbreaking news prompted Alí to rush into the void; whose impact of the body on the ground opened the earth in two and, miraculously, water began to flow from the bottom of the ravine. Today this place is known as Pantano de Tibi (“Swamp of Tibi”). 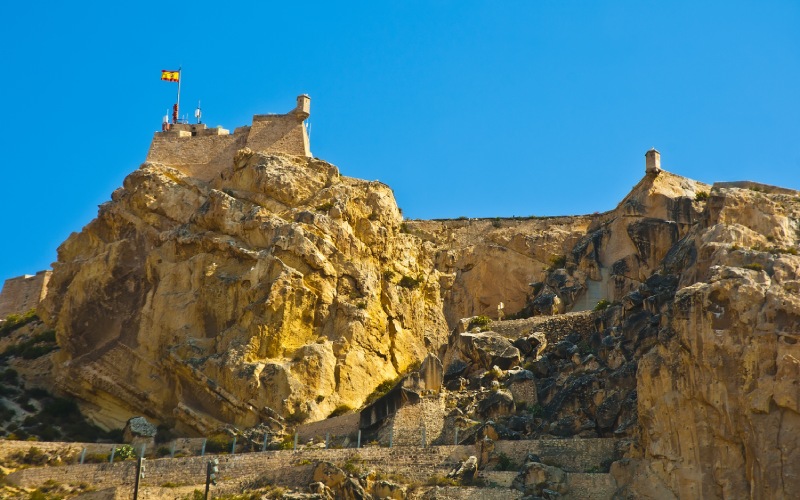 When Cántara heard about the sad end of her beloved, the princess decided to follow his same destiny and threw herself into the void from the San Julián mountain range. The loss of her daughter caused the caliph to die of grief. It is said that, since then, the caliph’s face was engraved forever on the slope of Mount Benacantil; an emblem that is now known as Cara del Moro (“Face of the Moor”). For that reason, the neighbours, overwhelmed by the romance of the young people, decided to join the names of Alí and Cántara to change the name of the city to Alicante. From the Postiguet beach you can see what looks like the profile of a face in the mountains of the castle. This is one of the most iconic images of the coastal town.