Jaca, in the province of Huesca, has always been one of the great, if not the greatest, Spanish Pyrenean bastion. This small town has been immersed in battle due to its strategic position with respect to such important border crossings as Somport or Portalet in the Tena Valley. As a result, it has one of the most impressive fortresses in Spain. Originally from the 16th century, the Jaca citadel or San Pedro castle is almost perfectly preserved, displaying the Italian style that defined it from the beginning. 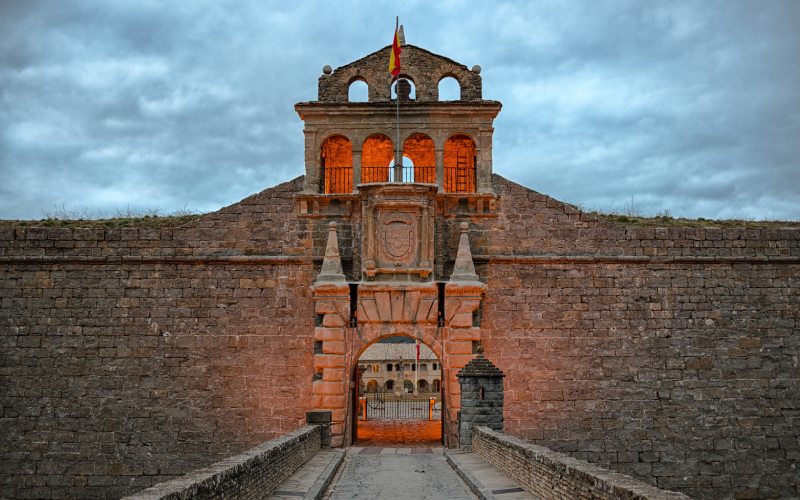 Entrance, bridges and bell gable of the Jaca Citadel. | Shutterstock

Philip II’s plot to defend the border with France

Between 1592 and 1595 work began on the Jaca citadel. Aragon and Philip II did not get on well at that time. Following the fall from grace of the royal secretary Antonio Pérez del Hierro, a conflict began that would end with the Aragonese Justicia Mayor, Juan V de Lanuza, headless. As well as leading the black legend against the Austria, Pérez organised an invasion attempt with Huguenots, French Protestants. Supported by Navarre, he failed, but the monarch was left worried. 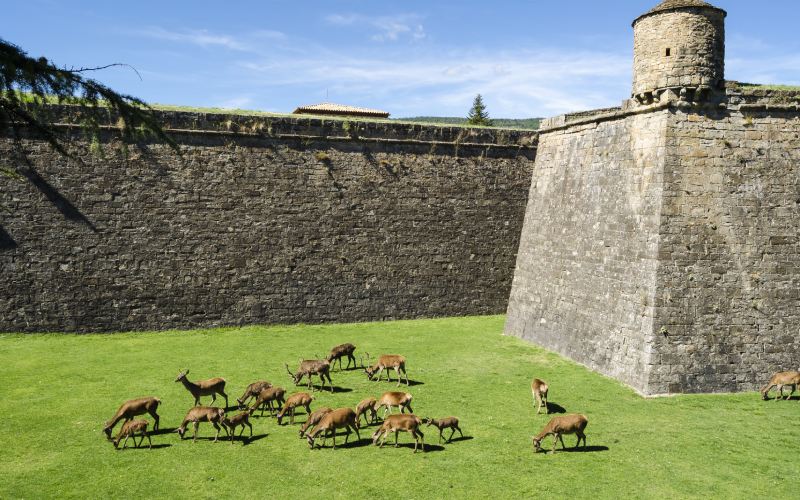 Deer in the pit. | Shutterstock

For this reason, he put the renowned architect Tiburzio Spannocchi in charge of the design of a pentagonal Italian fortress, which would be known until the 19th century as Castle of San Pedro. Like that of Pamplona, it was designed for new forms of warfare. Its walls were much lower than medieval castles such as Gormaz or Burgalimar. The artillery had made the high walls cease to be an advantage. The Renaissance section of the Jaca citadel is clear. Following the style of the ideal cities, the perfect geometry also allowed to compose a complete defensive system that covered all the fronts.

A place called the Burnao was chosen to build the citadel. As there was already an outer wall, what was required was a strong point to complement it. Glacis, or gentle slopes, preceded a large moat now inhabited by deer. From there, imposing walls were erected in a regular pentagon complemented by five bastions. These allow for forward defence and crossfire coverage. The addition of two bulwarks at the base of each bastion completed the wall defence. These spaces generated openings to launch projectiles from the sides of the strong points, protecting their surrounding spaces. 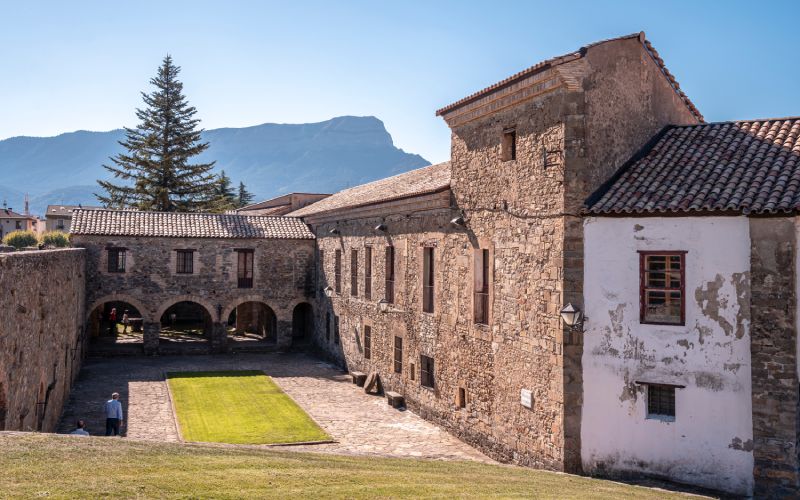 A bastion against the French that ended up defending the Gauls

The completion of the Jaca citadel took a long time. In fact, it would not be fully completed until the 18th century. Its church, which dates back to the end of the 17th century, is baroque and entrusted to Saint Peter. The development finally left a fortress of great capacity, capable of housing hundreds of men. Together with its Pamplona colleague and forts as powerful as Santa Elena, near Biescas and which guards the entrance to the Tena Valley, it was a reference point for the defence of the Pyrenees.

Ironically, however, his moment of glory in the war did not come by defending itself against the French; but by giving them shelter. Napoleonic invasion took the Huesca fortress by surprise; and with hardly any soldiers it quickly fell along with the rest of Jaca. The change of hands took place on 21st March 1809. The point would be a great stumbling block for Spanish activity in the area. Likewise, it was vital to save a possible retreat to the other side of the Pyrenean mountain range. 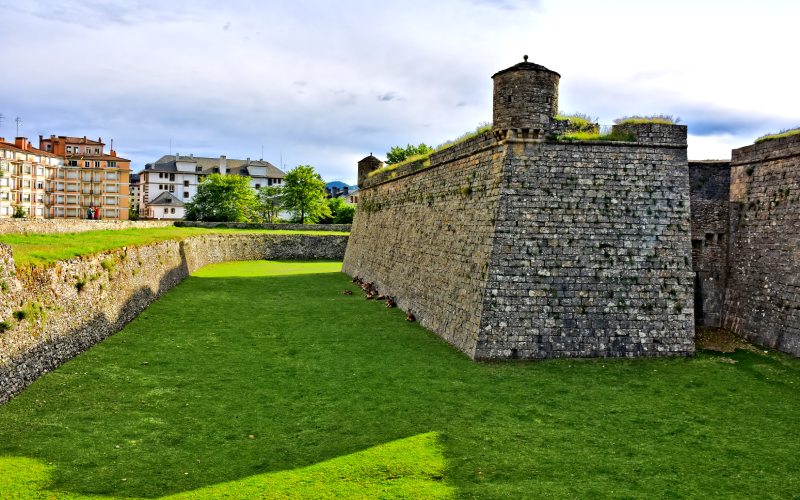 Bastion and bulwarks of the Jaca Citadel. | Shutterstock

The local actions of the guerrillas of Francisco Espoz y Mina together with the advance of Wellington towards Vitoria led to a curious situation. In the summer of 1813, a force of more than 10,000 Napoleonic soldiers arrived in Jaca from Zaragoza, Huesca and Navarre. They decided to leave for France, leaving some 800 defenders in the Aragonese city, led by Commander Déshorties.

A determined attack by Antonio Oro, commanded by Espoz y Mina, forced the Gauls to take refuge behind the walls on September 13th. A constant give-and-take, in which the French managed to re-supply on several occasions, led to the intensification of the siege by another Spanish soldier, Marcelino Oráa. It was he who managed to take the walls and the city in December. Espoz y Mina himself led the siege of the citadel of Jaca; which lasted until February due to the lack of artillery. Only the shortage of foodstuffs made the French soldiers surrender, with honours. 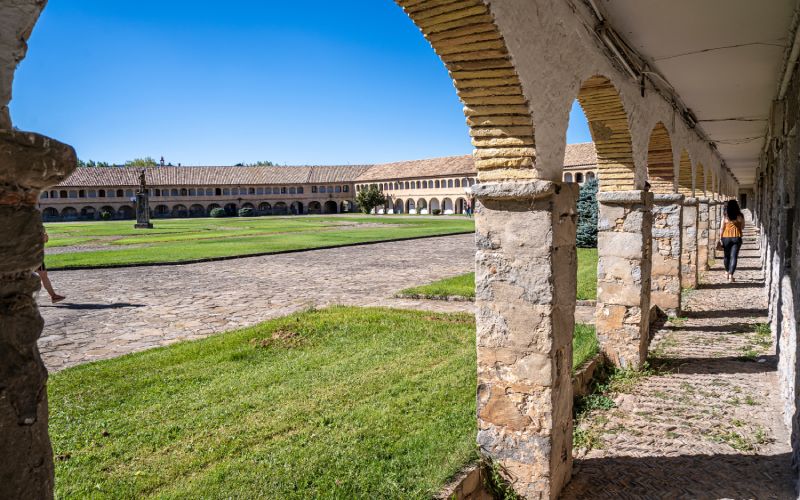 Museum and miniatures of the great Spanish pentagonal fortress

Despite the constant cannonade, the shelling and the mines that Espoz carried out; the castle of San Pedro has come to the present day in one piece. After the conflict with Napoleon it had little tactical importance, although it remained in use by the army until recently. In the meantime, it lived through dark times; such as when the citadel of Jaca was a concentration camp during the Franco regime. Be that as it may, its current appearance is due to the award-winning reforms of 1968. These were aimed at preserving the original aspect, ensuring the structures. 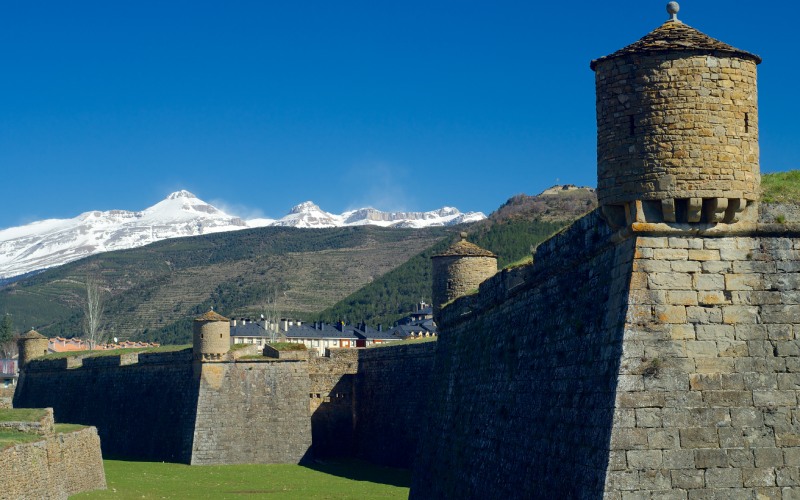 Bastions and sentry boxes of the Jaca Citadel. | Shutterstock

It is currently managed by the San Pedro Castle Consortium, the result of collaboration between the local council, the Ministry of Defence and the Provincial Council of Huesca. Access to the complex is currently through the main door. This is situated opposite another landmark of Jaca, the Romanesque cathedral. Defensive streets and a fixed bridge are continued by another drawbridge, key in its former defensive use. The entrance segment is notable for the bell gable that stands on top. Its bells served to communicate with the garrison.

The visit allows us to see the main elements of the Jaca citadel; from climbing the bastions to understanding how the bulwarks worked. Gunpowder magazine, ventilation areas, church or parade ground are other outstanding places. In the last one there is a statue of Philip II, promoter of the castle of San Pedro, a rara avis in Aragon. 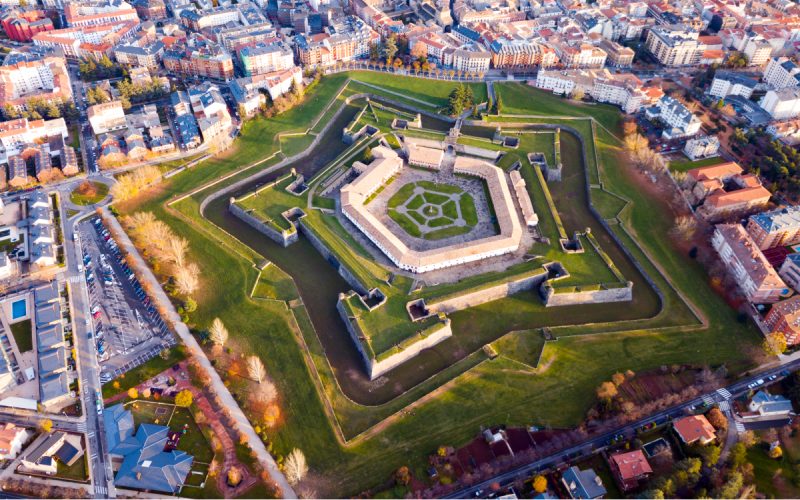 Aerial view of the Castle of San Pedro. | Shutterstock

The buildings surrounding the parade ground also contain the most curious space of the pentagonal fortress. This is the museum of miniatures. These range from original creations and prize-winning dioramas given by the Ministry of Defence to recreations of battles such as the one at Waterloo. This one alone has more than 8,000 tin soldiers. In total, there are more than 35,000 figurines and 24 scenarios. Your visit is included in the general ticket. This is an incentive that complements the tour of the only fortress of this type that has been kept whole in Spain.

Aragón, castles, Huesca, museums, Way to Santiago
It may interest you...