Alicante, the city of the Sun

The city of Alicante is known for its extraordinary climate and quality of life, its beaches and its cuisine. It also has important archaeological sites, museums and a castle. All this is complemented by a dynamic cultural offer.

Plan your trip to Alicante

There are so many things to do in Alicante if you want to spend a full weekend there enjoying the charming nooks and beaches. Its walks, monuments and museums make that there is a lot to see in Alicante. Also the nearby villages of Calpe, Denia, Altea are a perfect destination for a day trip. 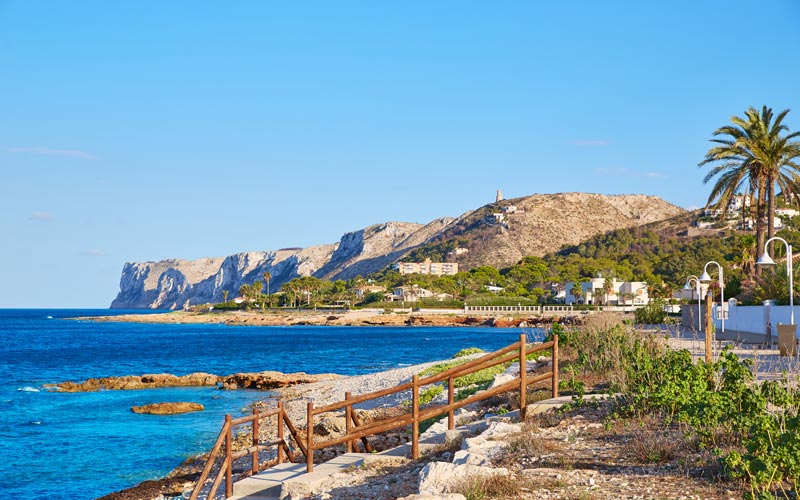 The Iberians settled on Mount Benacantil from the 4th century B.C. On the outskirts, the Greeks founded later the colony Akra Leuka, which was occupied by the Carthaginians in 231 B.C. The remains of the Roman city of Lucentum are located in Tossal de Manises, near Albufereta beach. It is a rarely frequented place in Alicante. 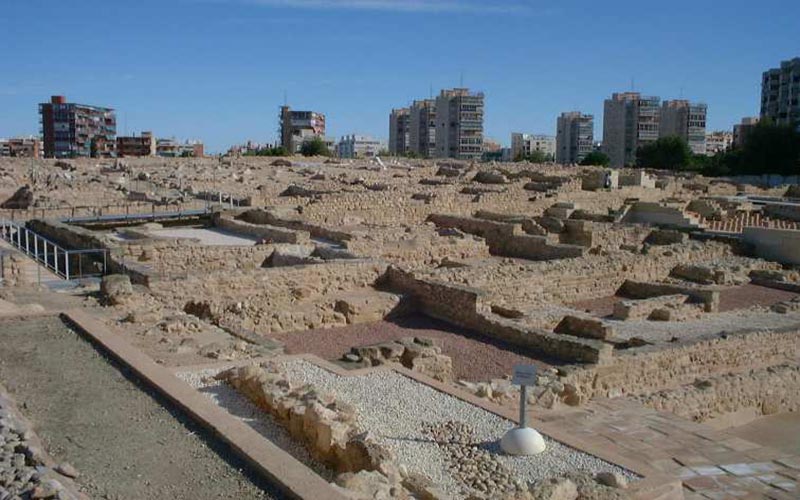 Archeological site of the Roman city of Lucentum.

When Arabs arrived there, Alicante, Villena and Orihuela formed the Cora de Tudmir, which agreed the Visigoth governor Teodomiro. After a year, the Arabs took control of Al-Laqant. There they built a medina and an alcazar. After being part of the Caliphate of Cordoba, they became part of the Taifa kingdoms of Denia and Almeria. At the beginning of the 13th century, being part of the Taifa of Murcia, its king Mohamed Ben Hud placed it under Castilian protection in 1243. After a year the Treaty of Almizra was signed. By him, it is confirmed the belonging of Alicante to Castile. Three years later, the Muslim governor Zayyan Ibn Mardanish gave way to the Castilian troops who took the Alcazar of Banu-l-Qatil (Benacatil). Since then it has known as the Alcázar de Santa Bárbara, one of places to visit in Alicante today.

King James II conquered the castle of Santa Barbara in 1296 and incorporated Alicante into the Kingdom of Valencia. During 1356, at the beginning of the War of the Two Peters, the Castilians took the city again. Thus, they controlled it for a decade, when it was given back to the Aragonese. The Jewish quarter was attacked in 1391 and Jews left the city. King Ferdinand the Catholic granted it the title of “city” in 1490.

Later, in the summer of 1521, the city was occupied by the rebel Brotherhoods, although they were expelled by the king’s troops shortly afterwards. Because of the loyalty of the population Emperor Charles V in 1524 awarded the city the highest dynastic decoration: the Golden Fleece. Alicante became the Mediterranean port best connected to Madrid. Actually it became the third commercial city in Spain during the 16th and 17th centuries. 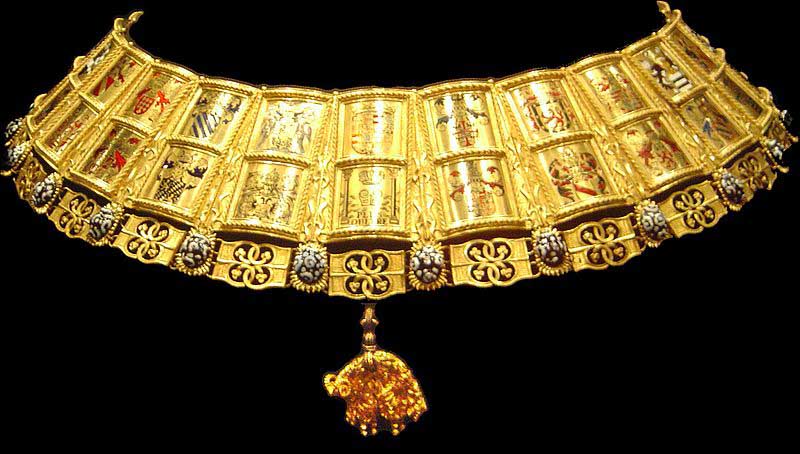 A French fleet bombed the city for a week in 1691. Alicante remained faithful to Philip V until in August 1706 it was taken over by the English, who stayed until 1709. A Consulate of the Sea was created in 1785 in order to settle the matters of the growing mercantile traffic.The city was the provisional capital of the Kingdom of Valencia during the Peninsular War. In 1813 the castle of San Fernando was built on Mount Tossal therefore it helped to prevent the Napoleonic troops from conquering it.

Modernization of the city

The railroad connected the city with the center of the peninsula and its economy boosted. In 1844 the rebellion of the progressive liberals commanded by Pantaleón Boné took place. It led to the siege of the city and ended with the execution of the thirty officers involved. A few years later the walls were demolished, leaving only the two castles. 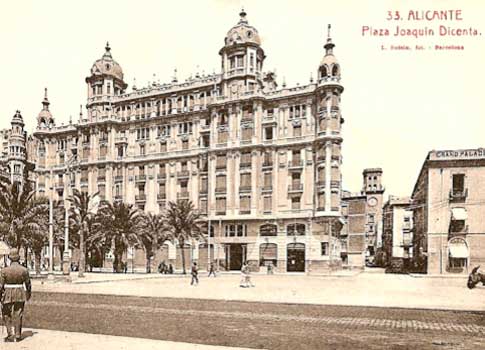 Old postcard from the Casa Carbonell.

During Spanish Civil War, the founder of the Spanish Falange, José Antonio Primo de Rivera, was shot in his prison. It would be the last city to fall into the hands of General Franco’s troops.

Best places to go in Alicante

The trip begins in the Explanada de España, a great promenade with four hundred palm trees paved with mosaic. It has an Auditorium and street markets. It is bordered by stately buildings such as the Carbonell House (1924), the Lamaignere House and the Casino. The tour then continues along the Paseo de Gómiz, in front of Postiguet beach, whose name comes from the wicket of the Portal Nou, where the old Jewish quarter was located. 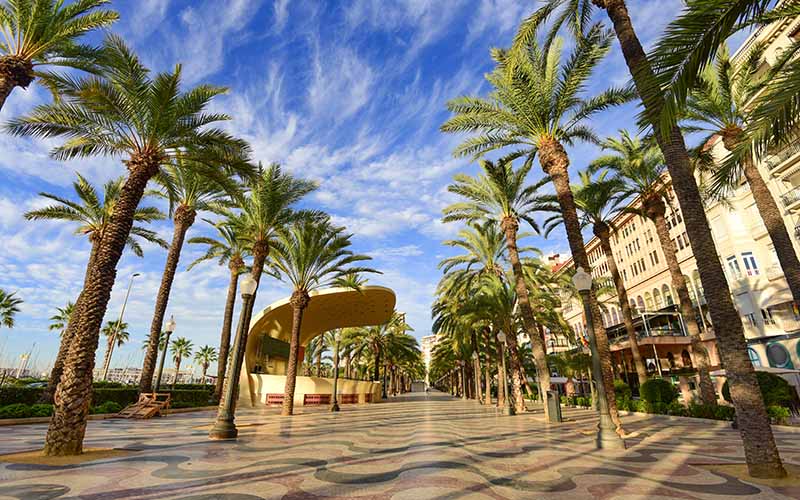 From the promenade you can take an elevator to go up to the Castle of Santa Bárbara. Located at the top of the Benacantil is the most characteristic monument of the city. Although it has Carthaginian origin, it was inhabited by Romans, Byzantines, Visigoths, Arabs and Christians. It became a prison of “political” soldiers such as Prim or Torrijos in the 19th century. A wall remains from the first Muslim period, the Torre del Homenaje was in the highest part. On the other hand, from the Castilian rule are the misnamed Tower of the English, the weapons room and the old moat where historians place the death of the Castilian governor Nicolás Pérez at the hands of James II himself. 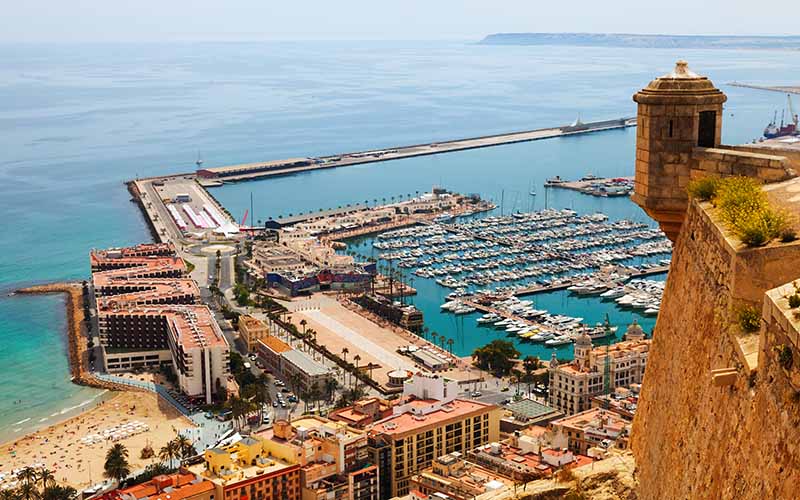 Views from the Torre del Homenaje.

The Castle houses two of the main museums to visit in Alicante. On the one hand, the Museum of the Bonfires of San Juan, with memories of the party, photos and pardoned ninots. On the other hand, the Medieval Museum, with shields and weapons from the Middle Ages.

Near Avenida Vázquez de Mella is the MARQ (Provincial Archaeological Museum of Alicante) with its collections of Iberian villages, Visigoth and Muslim art. In its collection is the Dama del Cabezo Lucero, coetaneous of the Dama de Elche. It is the most important piece of art to see in Alicante: don’t miss it out.

On your way back to the Old Town you have to go to the Calle de Labradores, where the large families of local landowners live. There is the Church of Santa María (1264). The main facade is baroque with sculptures of the Virgin and saints. Indoors are the main altar with a Carrara marble baptismal font of the 16th century, a choir and a tabernacle of the 18th century. There is also the Casa de la Asegurada Museum and the MACA Museum of Contemporary Art of Alicante. However, the latter is not a priority to visit in Alicante. Nearby is the Convent of the Blood of the cloistered Augustinian nuns (18th century).

The Co-cathedral of San Nicolás de Bari (17th century) has on its main facade a niche of La Virgen del Remedio. The altar keeps an image of the titular saint of the churche from the end of the XVII century. There is also the Plateresque style dressing room of the Virgin, the 15th century cloister, the Baroque grille, the sculptural group of Christ and the two thieves, the Baroque altarpiece with a relief of The Annunciation carved in marble from the Communion Chapel and the image of the Christ of Good Death, from the 18th century. 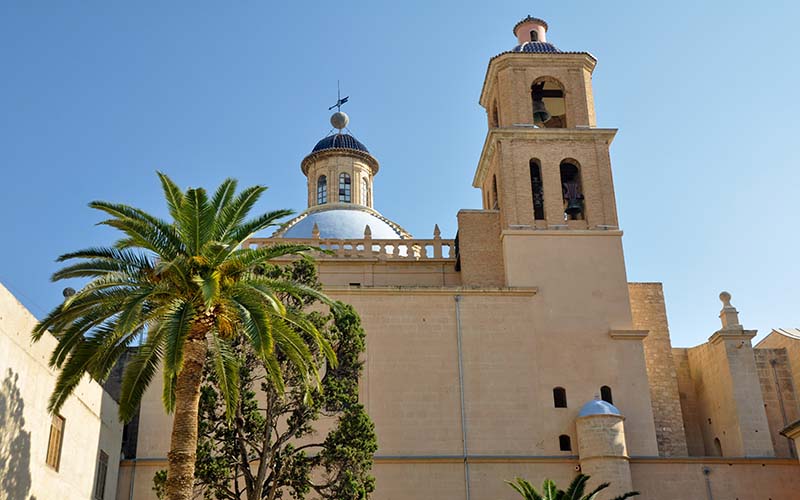 Next to the cathedral is the Royal College of the Society of Jesus (s. XVIII). It is now occupied by Capuchin nuns. Nearby are the Pozos de Garrigós, ancient cisterns dug out of rock to store water. The Museum of Ceramics is inside.

The Baroque Town Hall (18th century) is identified by the Salomonic columns, the balcony and the two rampant lions that support the city’s coat of arms. A pair of massive towers flank its ends. Inside there is a reproduction of the letter of Ferdinand the Catholic with the title of city (1490). Among its interesting rooms is the chapel with tiles by Manises and the Salón Azul. 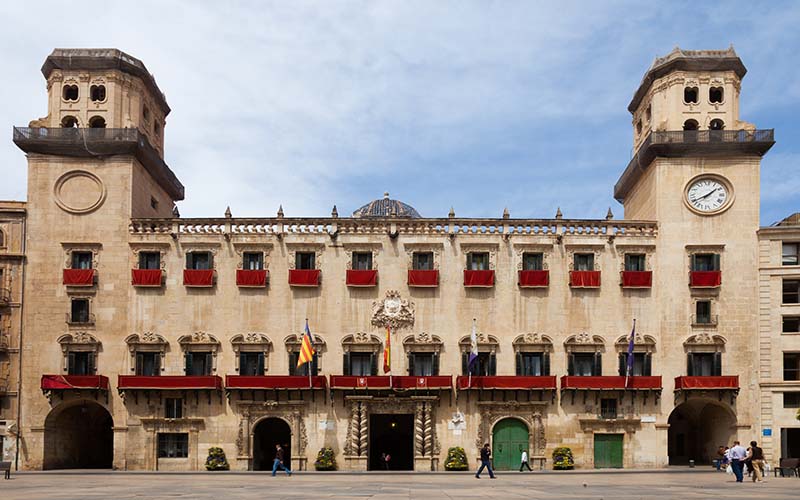 The Museum of Nativity Scenes, with Christmas dioramas and excellent collections of figures, can be accessed via San Agustín Street. In the Palacio Gravina, from the 17th century, you will find the Museo Provincial de Bellas Artes or MUBAG (Gravina Museum of Fine Arts) about Alicante artists from the 19th century to the present day (it is not an essential place to see in Alicante). Moreover, the Castle of San Fernando which was built on Mount Tossal during the War of Independence offers good views of the city.

On the way to the beach

On the coast road, in the direction of San Juan Beach, very close to Albufereta Beach is the important site of the Roman city of Lucentum, which was once Iberian. It is a very special place to visit if time allows. 8 km from Alicante you can visit the Monastery of Santa Faz (18th century) with a baroque façade, flanked by columns. We emphasize its Renaissance altarpiece and the reliquary of the chapel behind the altar (whose relic is considered miraculous). 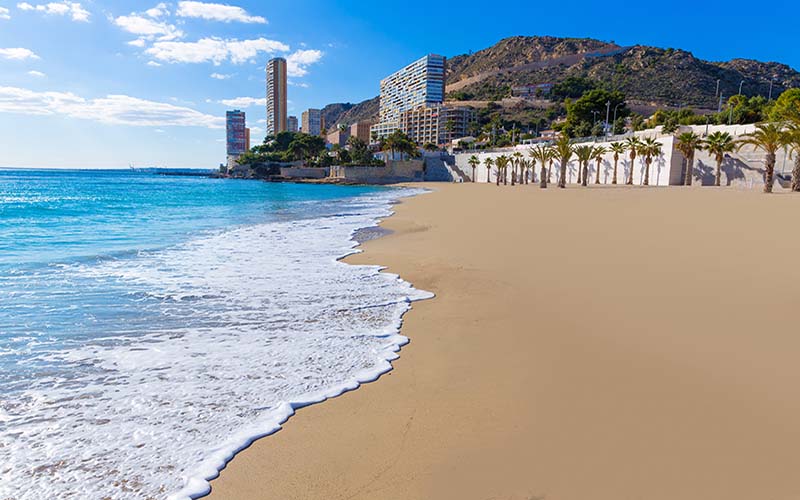 The main festivities in Alicante are the following ones: Bonfires of San Juan (from 21 June with the ‘Plantá de Ninots’ to ‘la cremà’, Night of San Juan, on the 24th), San Pedro (28-29 June, mascletás and firework castles in the Postiguet beach; Nit del Foc, 29 June). Pilgrimage of La Peregrina on the following Thursday to Easter week. Walkers head towards the Monastery of Santa Faz where the miraculous relic of the Veronica cloth is preserved. It combines religiosity with the ‘rollets of aguardiente and mistela’

Events to look out for in Alicante: Carnival

Alicante, beaches, churches, Valencian Community
It may interest you...