One of the architectural currents that most marked the aesthetics of cities in the 20th century was brutalism. This movement originated after the end of World War II, at a time when the great powers were in crisis and art had to row in favor of the practical and not the aesthetic. The brutal architecture can be clearly seen in these 5 buildings.

This is how brutalism arose, whose main characteristic is reflected in its name. It was Le Corbusier who first mentioned this trend as ‘beton brut‘, translated as ‘raw concrete’ and Reyner Banham adapted the concept to English leaving it as we know it today: ‘brutalism‘.

It is Le Corbusier’s definition that gives meaning to this groundbreaking trend, referring to the architect’s predilection for concrete. It should be noted that, in a Europe devastated by war, the cheapest and most resistant material available was concrete. The architects understood that it was not a time for ornamentation or attention to detail. Taking this as a basis, Brutalism arose. Buildings of large proportions, with the raw material, concrete, as the main protagonist and intended to be functional places such as social housing or institutions.

The main characteristics of brutalism would be the predominance of concrete, the large size and the lack of ornamentation. This resulted in tremendous buildings that at the time served as great public places and today have remained as impressive remnants of another era.

Brutalism was a worldwide movement that spread throughout most European and Latin American countries. In Spain there are great references of this ‘brutal’ movement. There are in Barcelona but, above all, in Madrid, for being the city that preserves more examples. 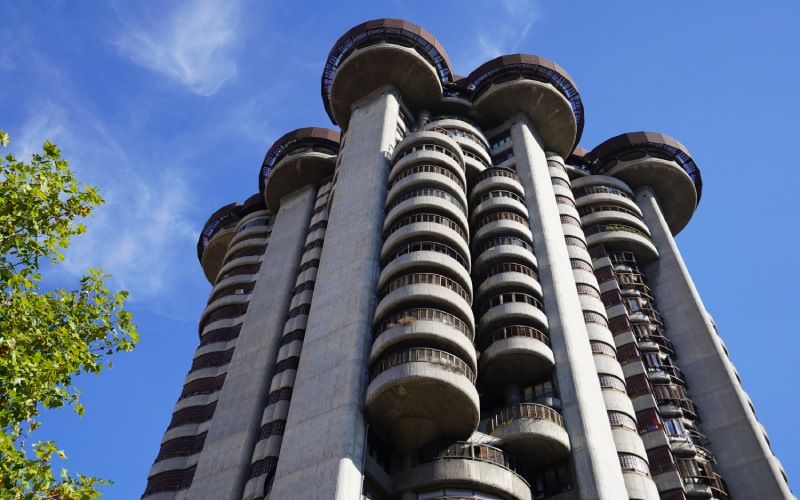 Torres Blancas (white towers), by Francisco Javier Sáenz de Oiza, is one of the most characteristic buildings of brutalism in Spain and is located in Madrid, specifically in the neighborhood of Avenida de América. This building has been studied and referred to as one of the most curious and special constructions in the capital. Its great interest lies in that, despite being properly of the brutalist current, has attached a number of features that makes it a unique building.

The construction breaks with the norm that the current destined the buildings to social housing, as it was one of the main luxury housing buildings in the capital. In addition, although concrete is one of its major components, it also uses wood and marble for the terraces. Despite being of enormous size and very rough with the aesthetics of the facade, its ingenious play of forms gives it a balance and subtlety rarely seen in brutalism.

Its name, White towers, has two possible theories. On the one hand, there are those who argue that it was an original project based on two towers and that it was the concrete that gave it its white appearance. Others, however, argue that the building itself consists of a large number of towers that are shaped around the arbitrary nature of its skeleton.

The brutalist labyrinth of Walden 7 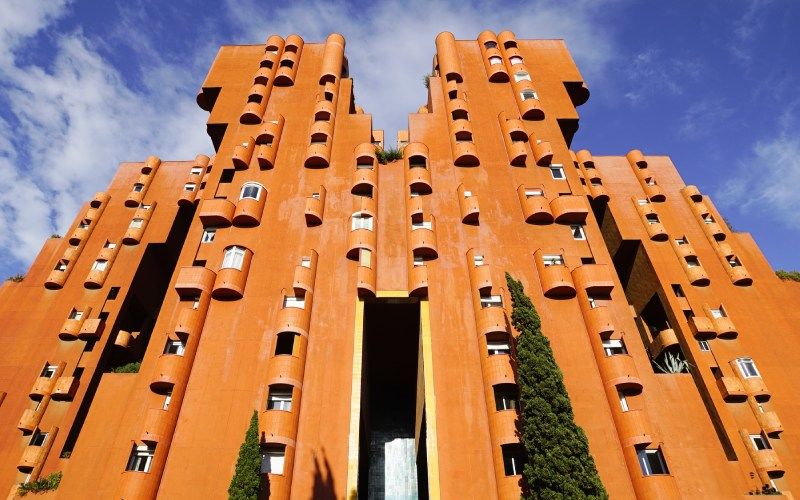 This architectural project by Ricardo Bofill is one of the buildings, within brutalism, that is becoming a novelty among the new generations. For its particular aesthetics and its labyrinthine shape, which has made it an attractive design. This huge building was built to be housing. It has a total of 31,000 square meters and inside you can find all kinds of apartments, from studios to apartments with several rooms.

Bofill’s main objective was to create a space that was endowed with gardens and common spaces for the many neighbors to share. In addition to this, it has two large swimming pools at the top of the building. All these apartments are articulated around five courtyards, which generate a large interior space in the building that generates a labyrinth-like sensation.

Based on geometric shapes, the use of these enormous proportions, its austere concrete facade without any decoration or detail and the choice of plain tiles for its interior courtyards, give Walden 7 all its characteristics. That is why it is one of Barcelona‘s icons of brutalism.

Valencia Tower and its controversial size 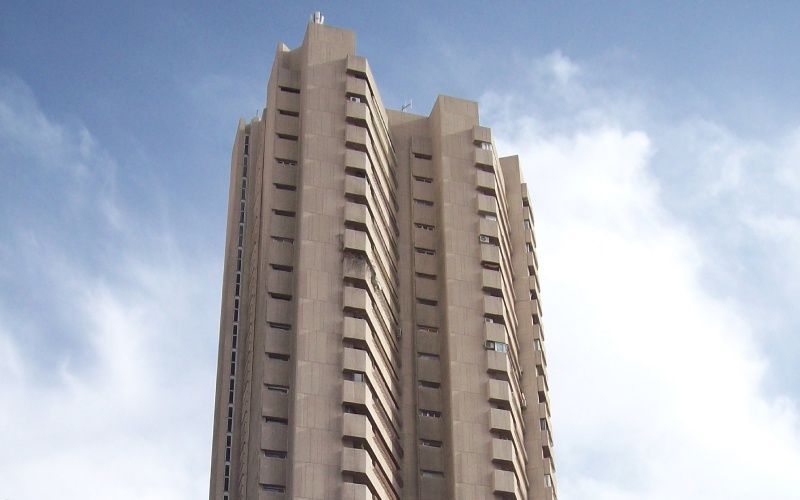 This huge building, located in front of El Retiro Park in Madrid, is another of the great representations of residential buildings in the capital. Its history is not as enigmatic as Torres Blancas, however, in its time it caused great excitement among people. It was a sales success right after its inauguration.

Javier Carvajal Ferrer built it in 1973 and at that time it was a scandal. It was highly criticized for breaking with the aesthetics of all the surrounding buildings. But its privileged location meant that hundreds of residents wanted to live with the incredible views from the upper floors of the park and the center of Madrid. This huge skyscraper, to this day, remains one of the tallest buildings in the capital, with 27 floors and 94 meters high, being seen even from Cibeles.

Faculty of Information Sciences, an example of brutalism in cinema 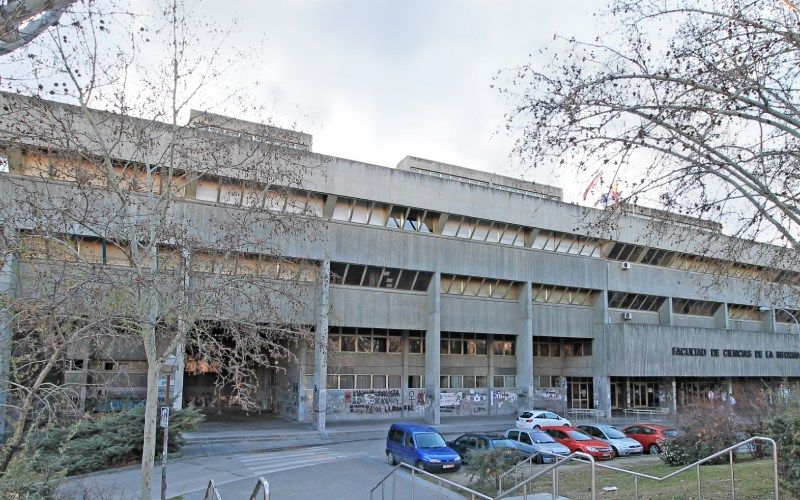 This building is another of the brutalist constructions in the Spanish capital. It is one of the examples of university faculty that was designed at the time. The complex was built in 1971 by architects José María Laguna Martínez and Juan Castañón Fariña. They respected to the letter the characteristics of brutalism, building a great mass of concrete where the only detail that can be highlighted is the golden coating of the windows.

Inside, it consists of five floors that are distributed irregularly and on which several corridors and classrooms with no apparent order can be found. They can be somewhat bewildering when it comes to locating a particular space. This building, which has served for decades to students of journalism at the Complutense University of Madrid, became world famous for the film Thesis, by Alejandro Amenábar.

Our Lady of the Rosary Church of the Philippines, the Brutalist Church 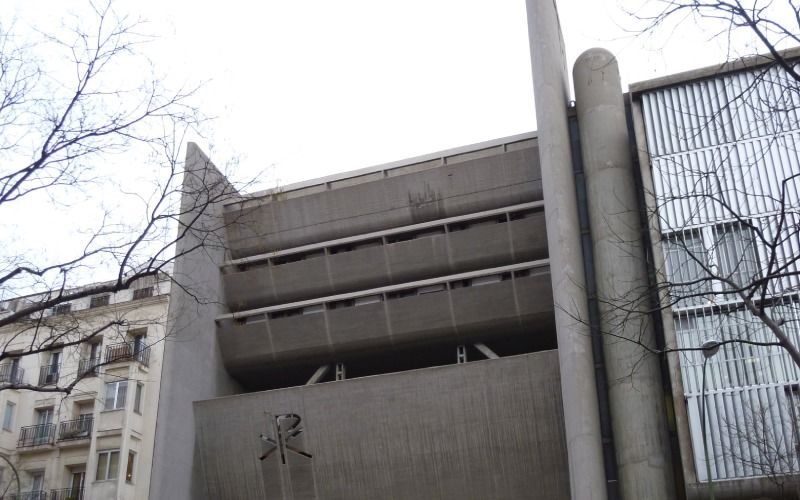 Our Lady of The Rosary Church of the Philippines. | Luis García, Wikimedia

This last example of the many that we can find in Spain as representations of brutalism is again in Madrid and corresponds to the Church of Our Lady of the Rosary of the Philippines. Despite being entirely significant of this architectural current, it is striking that, to this day, it goes so unnoticed by passersby. This is because over time, buildings of a similar size have been built around it, breaking with its “brutalist” effect.

This is another example of how concrete dominates the entire aesthetics of the building, consisting of a large smooth facade where only the church logo can be distinguished. Its most particular feature is the use made of the upper part of the facade, allowing light to enter the church in the form of a laminated opening.

barcelona, Catalonia, Community of Madrid, Madrid
It may interest you...