The village of the Rock and the Pirates

This village, surrounded by the Rock Natural Park and some skyscrapers, was the destination of many pirates: an event that is commemorated every year in the village’s festival of Moors and Christians.

Calpe and its origins

What to see in Calpe is linked to its history. There are several theories about the origin of the name of Calpe associated with characters from antiquity. Some associate it with the mythical Hercules Theban who, together with his Argonauts, called the place “Peñón”, in the 13th century B.C., as a parallel to that of Gibraltar. It has also been estimated that the Phoenicians called it Ifach, which in their language would mean “North“, as opposed to the Rock of Gibraltar (the South).

Finally, there are those who associate the name with King Numida Sifax, whose citizens may have settled there. The truth is that a population of Iberian culture settled on the slopes of the Rock for centuries.

Romans, Arabs and the Reconquista

During the Roman domination in the history of Calpe, the occupation was concentrated on the beaches of the southern side of the peninsula. This is the area now known as “Baños de la Reina Mora”. There was a group of buildings that took advantage of the adjacent natural salt flats for the salting of fish. In addition they built a fish farm and some thermal baths.

No relevant vestiges or news of the six centuries of Islamic occupation are preserved. There is no consensus as to when Calpe was reconquered, some say in 1240, after Denia. Others delay it until 1254. It seems that King Jaume I entrusted the defence of its fortress to the knight Pedro Eximenis Carros.

In 1282 the king Peter III ordered the construction of La Pobla in the surroundings of the Rock. After that, around 1291 it was given to the famous admiral Roger de Lauria who, in 1298, asked the King for permission to fortify the place. His daughter Maria, in 1344, inaugurates the Church of Nuestra Señora de los Angeles, as part of the northern wall.

But the attacks of the corsairs against the navigation and the landings in the locality motivated that the zone was practically depopulated. In 1386 the present towns of Benisa, Teulada and Senija were separated from the jurisdiction of the castle. Due to the insecurity in 1408 the village was abandoned, keeping only the garrison of the Rock Fortress. 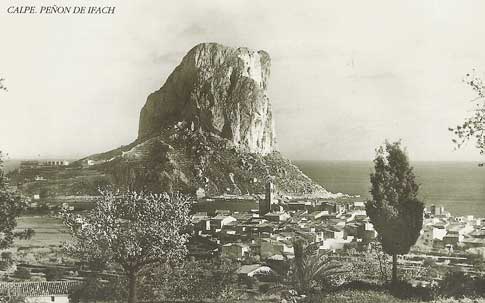 In 1548 the so-called Battle of Calpe took place, in which the galleys of the knight Vicente Peñaroja defeated some corsairs. At that time, a watchtower was built on top of an Arab fortress. It is located in the Mascarat gorge, so called by a masked bandit who committed his assaults in the area.

In 1600 there was another raid by the corsairs that was repeated in 1637. Ali Pichulim and Mahamut Manin entered the citadel and captured 290 people who were taken captive. The villagers were to remain in prison for five years, during which time the town remained uninhabited.

Again in 1663 there would be another attack. However, the most remembered is that of 1744, when the Moorish descendant called “Caragol” was the hero, while the so-called “Moncofar” joined the assailants. In the following years its fortifications were reinforced, and no more attacks took place.

During the War of Independence the inhabitants resist the assault of the French, earning the title of “Very Heroic Town” that appears in its shield.

In the 19th century it overtook other towns, attracting tourists. In 1935 it inaugurated its first hotel establishment. This gave shelter, among others, to Ernest Hemingway during the Civil War. In that conflict the parish church and the hermitage of the Savior were sacked. The parish priest and the right-wing neighbours were murdered. The destruction of all the archives of the town hall and the parish made it difficult to know much of the local history.

On 29th March 1943, fishermen from Calpe saved nine castaways from the German submarine U-77, which had been sunk the day before by English bombers from Gibraltar.

What to see in Calpe

Things to do in Calpe often involve enough attractions to spend an entire day going through it. You can go to the ruins in the beach area in the morning and then visit the old town in the afernoon to put an end to this beautiful day enjoying the beach and the views granted by the Ifach Rock natural space. Calpe has also some surrounding areas you definitely shouldn’t miss: Villajoyosa, Altea, Denia or Guadalest.

We recommend starting your visit in the Ifach Rock, the smallest natural park in Spain (only 45 hectares), of which the Visitor Center and the Nature Room offer excellent information. From the top you can enjoy breathtaking panoramic views of the Costa Blanca -you can even spot Ibiza from time to time. Access to this area is limited in Easter and in summer.

Remains from the Roman era

Coming back from the Rock to the village, there are some ruins called Baños de la Reina Mora next to Cantal Roig Beach. There are also some remains of the Salazones Factoty next to the Molí of Morelló, a building of a mill adaptated to the base of a watchout tower to spot the pirates trying to attack the area. Nearby, there are some thermal springs of the Roman village. Northwards, you can go to the Salinas of Calpe Natural Park.

If you continue eastwards via Gabriel Miró avenue, you will reach the old town. Near the Beato Sendra plaza you can see some ruins from the wall and the Peça Tower (15th century). The Collecting Museum is located in the Villa Plaza: it collects pieces from the village which are shown in temporary exhibitions.

Also, you can see the modern Nuestra Señora de las Nieves Church Parish (1973), next to the Old Church (1344): a Gothic mudejar temple that still keeps the South Chapel, the Bell Tower and the Necropolis.

There is an Archeological Museum with panels, miniatures, and pieces from the Roman Site Baths of the Queen. Plaza España is near and has the Festero Museum, which shows the typical dresses from the region worn by Christians and Moors. In fact, the Moors and Christians Museum is located in Ran Roque Street, which is devoted to the festival this locality hold every year. 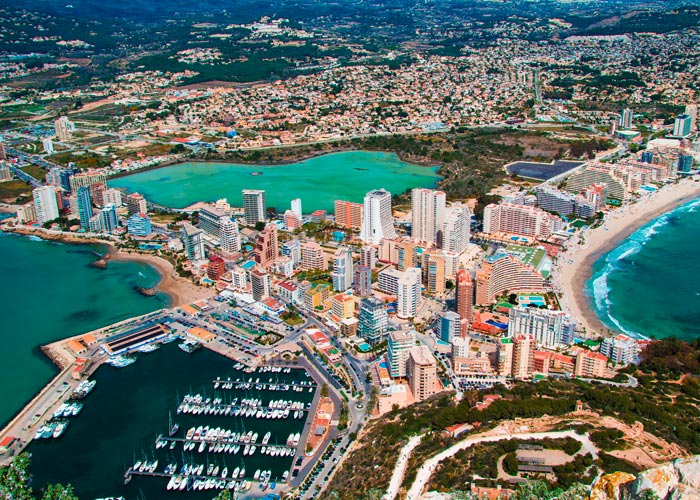 The Senyoreta House-Museum, a stately home from the 17th century, houses a collection of advertising posters. The Santísimo Cristo, Pescadores, Puchalt and San Roque were part of the Muslim quarter. One interesting main sight in this area is the Llavador of the Font (19th century) where women used to wash.

Nova House is located 2 km away; a fortified country house from the 18th century which still has an oven and a tanker. Also, in the outskirts of the town you will find the Cocó House, a building specialized in raisin production, which houses the Ethnologic Museum.

If you take the road southwards, you will rich Morro de Toix. It is a rock which will provide you with gorgeous views of the small bays; which are the dream for any diving-lover.

Finally, you can come by the Mascarat Cliff, named after the bandit “the masked man”. In a central rock which dominates the pass’ Royal Way, you can find the remains of an old watchout tower called Castellet, ordered to build by Philip II upon an old Muslim fortress from the 12the century which was remodeled in the 14th century. 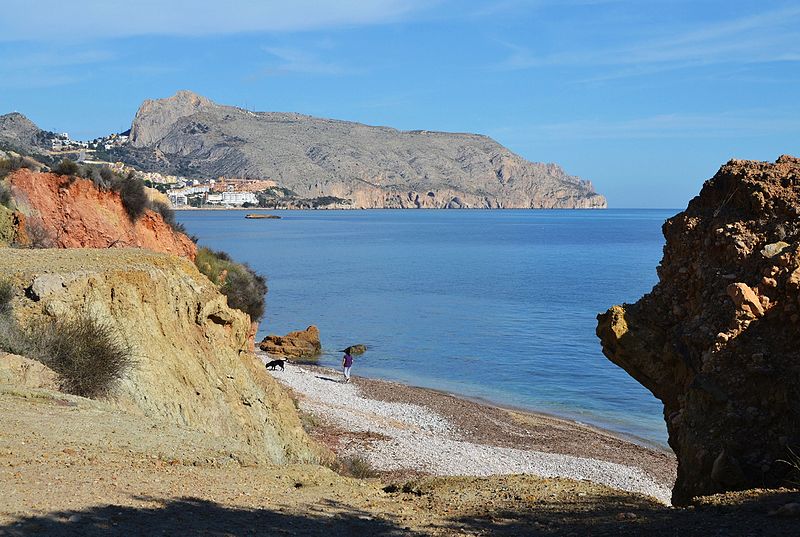 Alicante, beaches, Valencian Community
It may interest you...