There are places that become ways of life, like ports. The coasts bathed by the Mediterranean have a certain something that catches, dazzling. That turns them into love at first sight for everyone who visits them. The turquoise waters of the Mediterranean form a mantle of intense blue that reminds us of faraway paradises. As in the case of the Balearic Islands, a fairytale archipelago that seems to be taken out of the sky. Or the Costa del Sol and the taste of Andalusia on the lips. Or the Costa Brava as a source of inspiration for artists.

The Spanish Mediterranean harbors treasures that sometimes go unnoticed in a first approach. Such is the case of the ports. Although some of them have been built for the transport of goods or, on the contrary, have been reduced to a few moorings next to the beach, the truth is that they keep their own charm. Sometimes mixed with history, sometimes with breathtaking scenery. These nine ports are a small selection of some of the most beautiful ones in the Mediterranean. Some of them not so obvious to the eye.

La Duquesa, Malaga, summing up the beauty of Andalusia 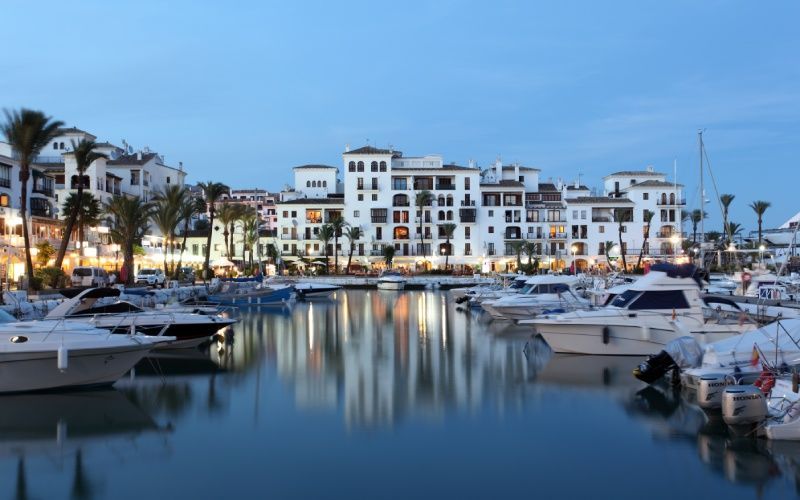 The Costa del Sol is one of those places where time stands still. Where life seems to take a breath. And one of those breaths is in Malaga, specifically in the picturesque village of Manilva. La Duquesa is a pearl wrapped in white colors and sea breeze located in a scenario dressed in vineyards, typical Andalusian atmosphere and traces of their Roman ancestors.

Located next to the beach, Puerto de la Duquesa is the perfect place to enjoy a warm sunset walking among the sailboats moored at the pier. Fancy a treat? In the port you will discover some of the most representative restaurants of Andalusian gastronomy. Because having a snack at the edge of the Mediterranean is a pleasure, and doing it with the flavors of Malaga, even better. 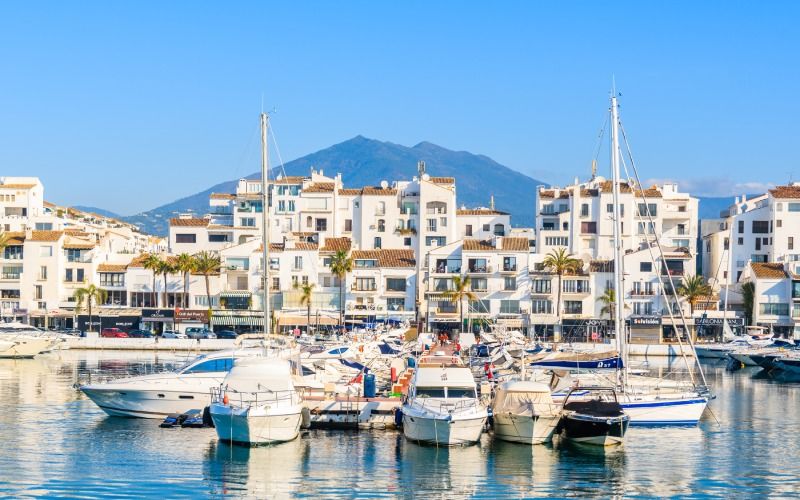 The crème de la crème as far as ports are concerned. And no wonder why. The first time you look at the Banús port you understand two things. The first is that it perfectly combines traditional Andalusian charm with the most exclusive modernity. The second is that the beautiful setting in which it is located looks like something out of a fairy tale. Tall palm trees that point out the windows of white houses by the sea. The ideal postcard for a luxury visit.

Declared a Center of National Tourist Interest and awarded the Gold Medal for Tourist Merit, this port has options for all tastes. From boat services, private events and exclusive restaurants where pets have their own menu, to sports equipment rental, tapas bars and idyllic areas for walking. 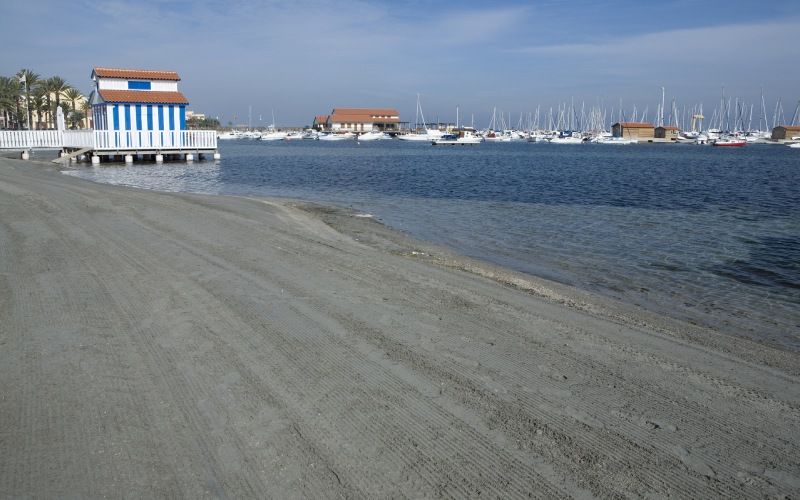 A leisurely walk along the beach leads to one of Murcia’s most representative ports. Los Alcázares is known for two things: for being a real oasis of calm in the middle of the Mediterranean and for hosting a large number of regattas in the summer months that attract the attention of tourists and locals. Several of them of a charitable nature.

Known for being the therapeutic port par excellence, since a few days in its calm waters will relieve anyone’s stress, the beauty of Los Alcázares lies in the fact that it has managed to maintain the essence of a fishing port. One of those places on the Spanish coast that often goes unnoticed by large maps and tourist tours. But as they say, the essential is invisible to the eye. 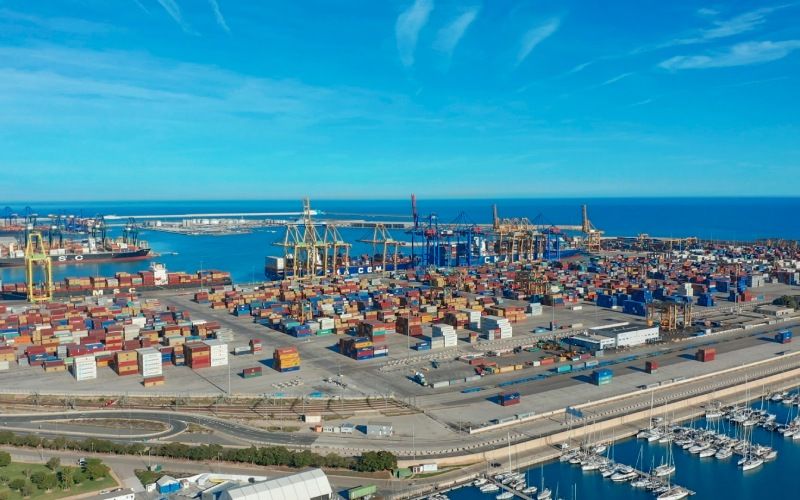 The largest port in Spain and the fourth busiest in Europe. Just like that, without preamble. The Port of Valencia has history for a while. In the mid-15th century it was considered the most important port of the Crown of Aragon thanks to its location and strategic infrastructure for maritime trade and mercantile communications. Today it imports products mainly to the United States, Japan and Turkey.

A very positive initiative of this port is its ecological projects aimed at the prevention of spills, water cleaning and waste management. A recommendation? Let yourself be carried away by the sea breeze from its pier and contemplate the enormous number of boats, small boats and sailboats resting on the moorings. The great gastronomic offer of the place will liven up the rest of the visit.

Ibiza Magna, one of the fishing ports of the Balearic Islands 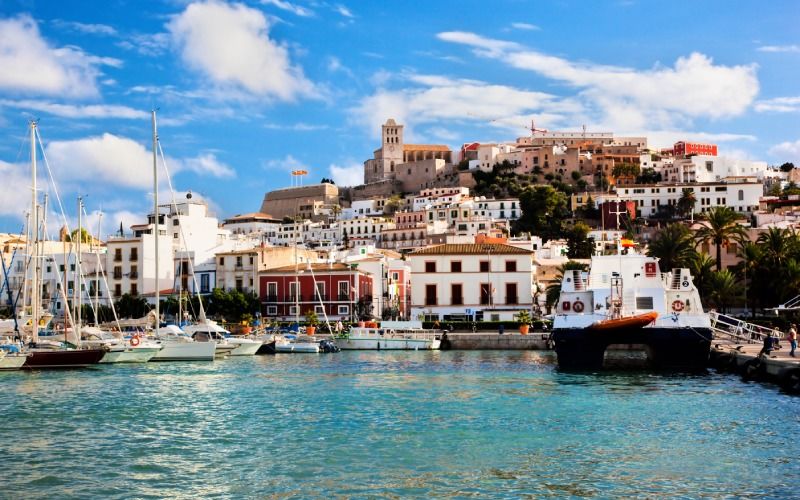 Land of corsairs, hippies and pirates, Ibiza is a paradise that you can fall in love with just by glancing at it. As a Mediterranean island, it has many accesses to its coasts. However, for romantics there is one that shines above all others: the port of Ibiza Magna. Located in the old part of the city, this small port is home to exclusive and traditional boats while surrounded by a beautiful view of the old town. A treat for the eyes.

Figuera cove, Mallorca, among the most charming ports of Mallorca 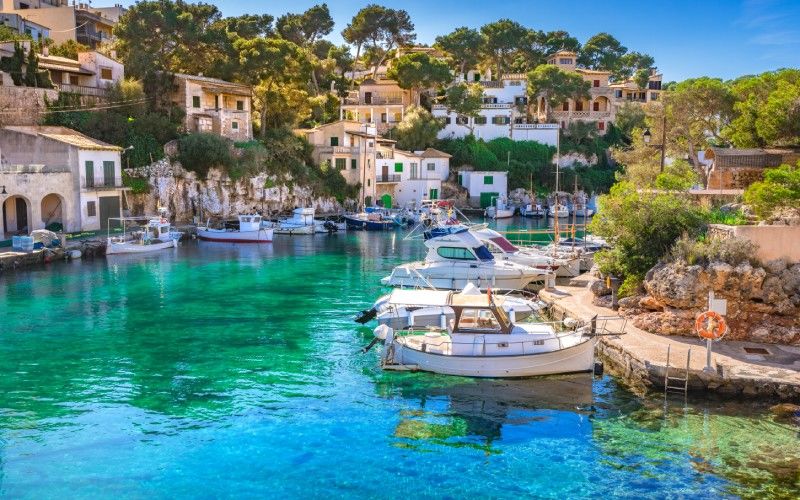 Continuing with small Balearic ports with charm comes this wonder. Surrounded by an idyllic natural landscape, the port of Cala Figuera hosts a delicious rural atmosphere typical of a fishing village. A perfect option to discover the llaut, the traditional Mallorcan boat, enjoy a quiet walk with the murmur of the sea in the background and even take a dip. In the small restaurants that surround the area you can savor the most representative dishes of Mallorcan cuisine. 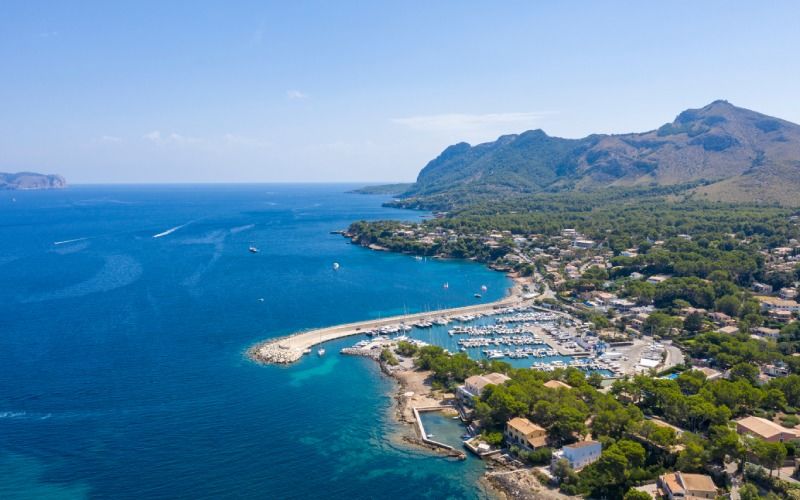 One of the best areas of Mallorca to have fun and disconnect. And one of the favorite places for Mallorcans to spend their summer vacations. Alcudia Port, Port d’Alcudia in Catalan, stretches across a large bay that has become one of the busiest for cycling enthusiasts thanks to its bike path. This beautiful landscape, a mixture of Mediterranean with pine forests and typical architecture, gives the port a privileged enclave.

In addition to being the second port of Mallorca with more transport itineraries, this port hosts a large number of services designed for locals and visitors to enjoy a different experience on the island. In fact, during the festivities of San Juan it is typical that fireworks shows, correfocs and concerts are held in its facilities.

Es Castell, Menorca, one of the most beautiful ports of the Balearic Islands 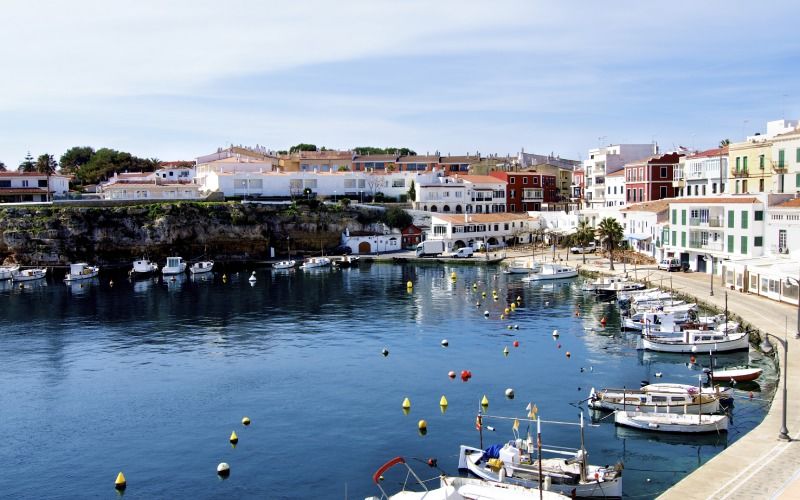 Beyond the beauty of the ports of Ciudadela and Mahón, the port of Es Castell retains a special charm that is worth mentioning. Created by the former English colonies that settled on the island in the 16th century, this little port embraces the typical simplicity of those who do not need to show off to shine. In the summer evenings there is usually a craft market that is well worth a visit.

Es Castell is located in a village of the same name. Home to sailors and fish sellers, it is an area with little influx of tourists that is located very close to Mahón and that shares much of its architectural style. A getaway away from the tourist overcrowding. 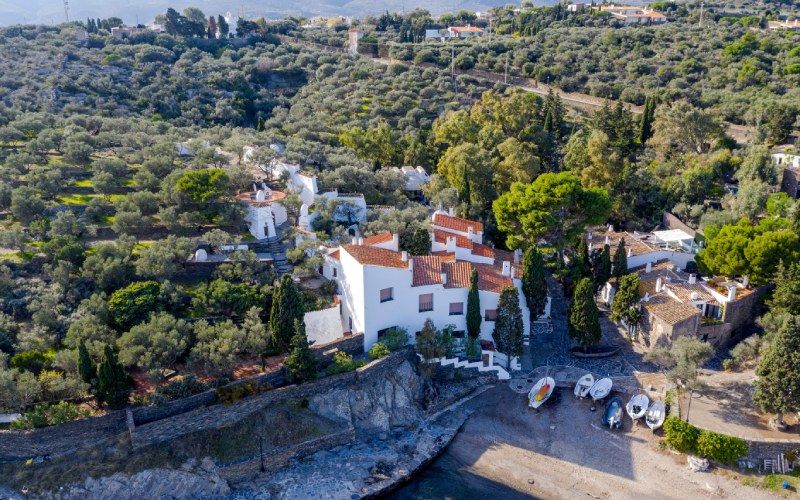 Another wonder if ever there was one. Port Lligat is a tiny port where everything vibrates differently. A place to arrive and stay in the middle of an intermittent silence that is only broken by small Mediterranean waves. The boats are simple, wooden, traditional. On this side of the coast there are no large cruise ships or cargo ships. The small village in which it is located is not to be missed either. Dalí’s favorite residence, Port Lligat is a parallel universe that remains forever in the soul.