If Spain can proudly boast of anything, it is its rich and varied cultural heritage, the result of the different peoples and religions that have passed through here over the centuries. The imprint of al-Andalus is undoubtedly one of the most significant and appreciated today. Seven hundred years of Muslim domination remain alive today in its great architectural monuments. The Alhambra in Granada or the Mosque in Córdoba are possibly the best representatives of the Andalusian legacy, but there are also many other examples that cannot be overlooked. For example, the Arab baths or hamman.

These are authentic Islamic architectural works that were also meant to remain and become part of Hispanic culture. They were very intimate rooms where the daily life of the Muslim society took place; often unknown to the Christians and Jews of the time. Today it is possible to visit some of the Arab baths that have resisted in time and get to know a part of history that is also ours.

The Ronda hamman is one of the best preserved in Spain. | Shutterstock

This is a spectacular archaeological site from the Nasrid era, built in the 13th century. It is located in the old Jewish quarter of Ronda, next to the Arab bridge and what was once the city’s Andalusian medina. The hammam of Ronda is the best preserved in the whole of the Iberian Peninsula and the one that receives the most visits per year.

It maintains the basic internal structure of the Arab baths: the changing room (apodyterium), the cold room, the warm room and the hot room. In fact, a large part of this building has arrived practically intact to this day. Even the hydraulic system with the waterwheel that operated the water route has been preserved.

The hammam of Ronda and the rest of the Arab baths in Spain follow an architectural structure under the precepts of the Roman model. In this sense, Rome should be given the main role as the diffuser of the spa facilities, both for domestic and public functions. When the Muslims expanded into these territories and found the ancient Roman baths, they decided to preserve them and imitate them in their later buildings. From then on, bathing became increasingly important in the context of Muslim society, to the extent that it became indispensable. Thus, they became a genuine institution, just like the mosques and the souks.

The interior of the Jaén hamman. | Shutterstock

They are the largest Arabic baths in Spain due to their size of 450 square meters. Built in the 11th century, today they are located in the basement of the Villardompardo Palace. The architectural beauty and historical importance of this hammam led to its being declared a National Monument in 1917 and a Historic-Artistic Monument in 1931.

For the Muslims, bathing was not only a place of leisure or personal hygiene as it was in the Roman world. They also went to the bath with a certain sense of ritual to purify themselves through the water and to be able to pray or go to the mosque, as the Koran states. In the holy book, reference is made to “Water” as the origin of life, a pure, unpolluted element. Therefore, the bath was a pious foundation that became an indispensable element of the material culture of Islam.

During the first years of Christian rule in Jaén after its reconquest, baths continued to be used, until they lost their function in the 15th century. In the following century, with the arrival of the Count of Villardompardo in the city, he built his palace on top of the hammam, hidden between the foundations and the basements.

The luminous vault of the Granada hammam. | Shutterstock

The baths of El Bañuelo or El Nogal de Granada are from the Zirí period, from the 11th century. They were built in the time of the Taifa King Badis, next to the Puente del Cadí. This hammam is one of the most valuable examples in all of al-Andalus; due to its impeccable state of conservation and the beauty it hides inside. These virtues have earned it the status of Asset of Cultural Interest. It is also one of the oldest works in Andalusian Granada, well before the Alhambra.

In El Bañuelo we can recall how life developed in these important meeting points of Andalusian culture. The hammam clearly shows the simple and welcoming decoration that characterised the Moorish baths of the medieval period; which were also composed of geometric motifs.

Its luminous vault shows how the lighting was produced indirectly, through several small openings in the star-shaped ceiling. This allowed for the ventilation of the baths. In some hammams on the Peninsula, these openings were originally covered by coloured glass that let in the subdued and nuanced light; thus creating an atmosphere of peace and tranquillity.

Can Fontroig manorial garden where the Palma baths are located. | Shutterstock

It is one of the few remaining architectural monuments from the Muslim era on the island of Mallorca. The Arab baths are located in the spectacular stately garden of Can Fontroig; which not only manages to embellish the structure of the building but also to give it sacred connotations.

Due to the desert geography and the hot, dry climate of most Arab countries, the worship of water is also staged in the garden concept. The purpose of these is to represent paradise on earth. For this reason, most Islamic natural plots are structured around a fountain.

Madina Mayurqa, as Palma was known in Islamic times, was a city founded by the Arabs on Roman remains. With the Muslim domination, from the 10th century onwards, a complex hydraulic system was built through the urban centre; making the construction of this hammam possible. Today, only the central room, used for hot baths, and a room attached to the baths, remain.

As was the case with Muslim palatial architecture, the Andalusian bath model was adopted by Christian society. Not only did they reuse the old Islamic hammams, but they built many others for the cities they had reconquered. Instead of giving it its own style in the Hispanic tradition, they decided on a Mudejar style, heir to the Andalusian models.

A clear example is that of the Arab baths in Girona, built in 1194. In reality, it was a Christian building in the Romanesque style, but its layout perfectly imitated the Roman baths and the Muslim models. In fact, it has five clearly differentiated rooms: changing rooms, a cold room, a warm and hot room, as well as an oven and boiler.

The baths are located inside the current convent of Las Capuchinas; in what was one of the main entrance routes to the city. It is worth visiting for its captivating simplicity of form and the attractive movement between light and shade. The monument has been declared an Asset of Cultural Interest in the Spanish Historical Heritage since 1931. 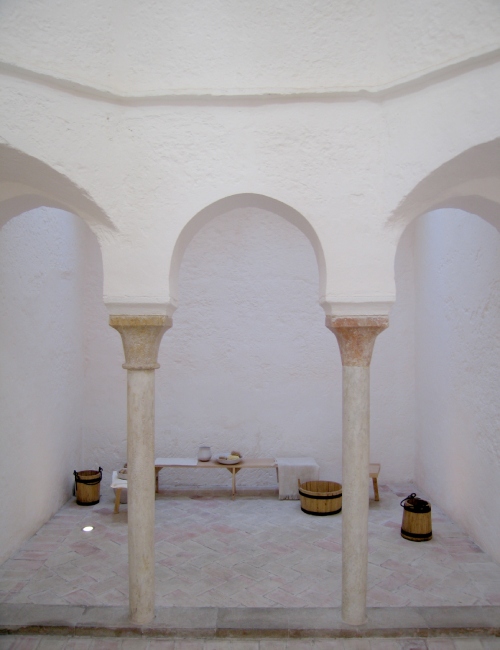 Like the previous ones, the Arab baths of Valencia were built in the Christian era, under the reign of Jaume II. It is a Mudejar building located in El Almirante Palace, in the heart of the city. They imitate the Andalusian architectural style both in their external facade and in their internal distribution. This space was used for the social life of the underprivileged classes during the Middle Ages.

The building has been reformed on several occasions since the 19th century; when it was decided to adopt a neo-Arabic style of architecture. But in 1963 it was rebuilt again to restore its original appearance. Today it is possible to visit them inside and enjoy the simple and welcoming decoration of its rooms; where the white of its walls stands out.