More than 50 years ago, the then swimmer Jesús Fiochi saw a surfing documentary about the waters of Hawaii. In the beach of El Sardinero, in Santander, some members of the CIS (Center for Underwater Research) caught waves with the plankings, small wooden boards with which you could catch waves face down -a kind of bodyboard-. In those two anecdotes the origin of surfing in Cantabria is based. Now, the north has a great culture in this that has become a way of life and a different way of getting to know places and connecting with the sea.

Berria, Cantabria. In this beach belonging to the municipality of Santoña, the sea currents run wild as if they wanted to drag its bathers to the very horizon line. The yellow flag flies quite often. The lifeguards keep watch over the more than two kilometers of a beach that requires constant attention. Two red flags mark the point where a current is moving. Still, locals and tourists will enter the water, but the rushing air and cold waters discourage the brave from doing so. Instead, many people take walks along the banks or try to catch the rays of sunshine that occasionally peek through the clouds. The classical northern summer. Only the rain is missing.

Despite the conditions, the sea is not empty. Quite the contrary: a lost of people paddle on huge boards inland. If they get swept away by the current, they can hold on to their lifejackets. These are the surfers. Amateurs, professionals and beginners face the sea with the illusion of, perhaps, riding a wave to go with them to the shore as if they were also water. The journey begins in Berria. This is the first day of five of a route that will help to discover Cantabria in a different way. 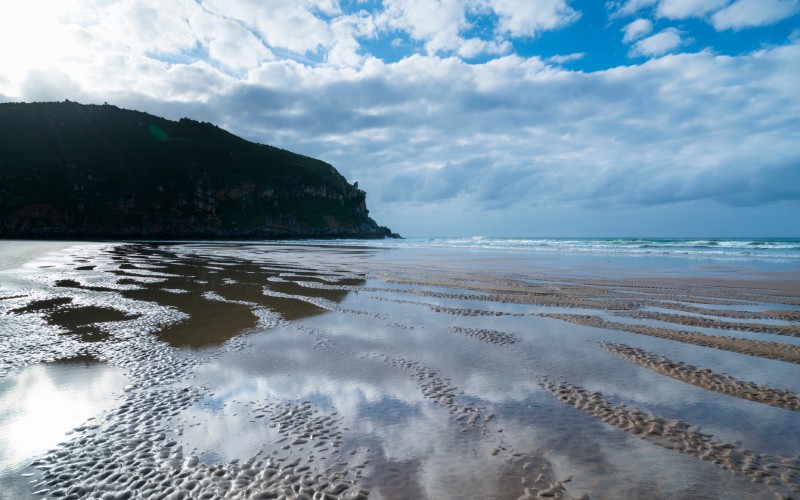 The beach of Berria in Cantabria. | Shutterstock

The sun shines like few days in Cantabria. The wave forecast is good at Ris beach, Noja. But, upon arrival, the sea sleeps as still as a rock. Wave forecasts sometimes fail and this time they have been completely wrong. Here, in this little piece of the Natural Reserve of the Marshes of Santoña, you cannot surf today. But, looking again, the beach of Canallave, in Liencres, presents itself as a good option for the sport.

After driving a little more than 40 minutes, the municipality of Liencres appears and, behind the dunes, the beaches of Canallave and Valdearenas stretch out, connected to each other at low tide. This area, beaches included, is part of the Natural Park of the Dunes of Liencres, a protected area of Cantabria of great beauty. As the tide is high, the beaches of Canallaves and Valdearenas appear separated by water as if they had never been communicated.

In Canallaves, of surfing tradition, the waves rise on the sandy bottom. But to look for them, you have to go to the right of the beach. The water bathes the rocks and many surfers do not dare to enter. But those who do will enjoy a good day: alone, in front of the dunes and under the sunset. If it had not been for the failure in the forecast, Liencres would still be an unknown place, and how sad it would have been… 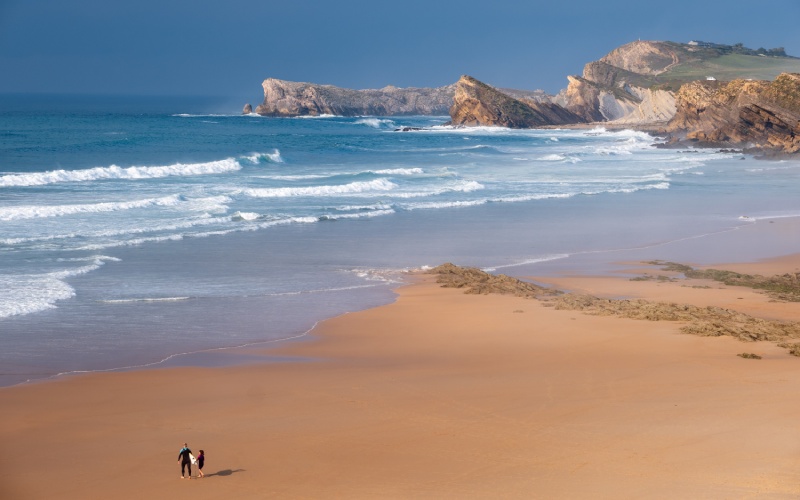 Moving to San Vicente de la Barquera is not only a good option for surfing, but it is also a great option to visit. Located on the western Cantabrian coast, the municipality is located in the beautiful Oyambre Natural Park. In addition, San Vicente has an outstanding monumental heritage, which was declared a Historic-Artistic Site. The King’s Castle, the church of Santa María de los Ángeles or the convent of San Luis are some of the monuments to visit. It also highlights the wall that fortifies what was once a medieval village.

Apart from its architectural and natural wealth, San Vicente de la Barquera is a well-known surfing area in Cantabria. Thus, it has stores and schools where you can learn from professionals, get equipped or rent the material. The beach par excellence for its practice, as well as the busiest for bathers and tourists, is that of Merón. With four kilometers, the coastline is divided into five parts: El Puntal, El Rosal, Bederna, Peñas Negras and, of course, Merón. In the open sea, this beach receives a constant swell throughout the year and the blue flag, a sign of quality, flies on its sand.

On this third day, San Vicente de la Barquera surprised by the large number of athletes in its waters, as in few in Cantabria. Luckily, the area is wide. Surfers wait seated on their boards for the water to rise. Meanwhile, they breathe the salt air and enjoy the view of the Picos de Europa to their right. Suddenly, a wave appears on the horizon. The surfers lie down on their boards and prepare to fight for it. 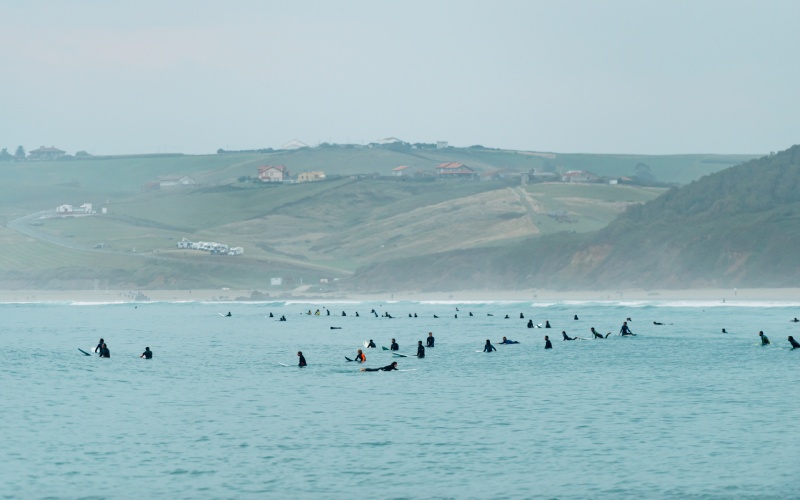 Many surfers swirl on the beaches of San Vicente de la Barquera. | Shutterstock

Day 4: The Sardinero leads to Langre

In 1965, Jesus Fiochi ordered a surfboard from a factory in the French town of Bayonne. The next morning, with no idea about the sport, but with extensive knowledge of swimming, Fiochi showed up at El Sardinero with the intention of doing what the instructions on the contraption indicated: stand up on the board after catching a wave. Wearing a wetsuit, the swimmer managed to catch his first of many waves that day. Today the beach of El Sardinero is the epicenter of surfing in the city of Santander.

Arriving there, the afternoon of the fourth day of this route through the beaches of Cantabria, parking near El Sardinero is complicated. The beach is full and people concentrated in its accesses. To catch a wave will have to fight tooth and nail with the rest of surfers and be very careful not to take a swimmer ahead. Today is not the best day to surf here. We will have to change. There is a good forecast at Langre beach. We will have to try there.

40 minutes later by car, the beach of Langre, in the municipality of the same name, is guarded by an impressive cliff about 25 meters high. Its currents and the orientation of the beach make Langre a good choice for surfers. Here, its visitors will not find neither stores nor schools, although it is a good place to practice snorkeling on its westernmost side. Its waves can reach a considerable height, although the ride is not too long. 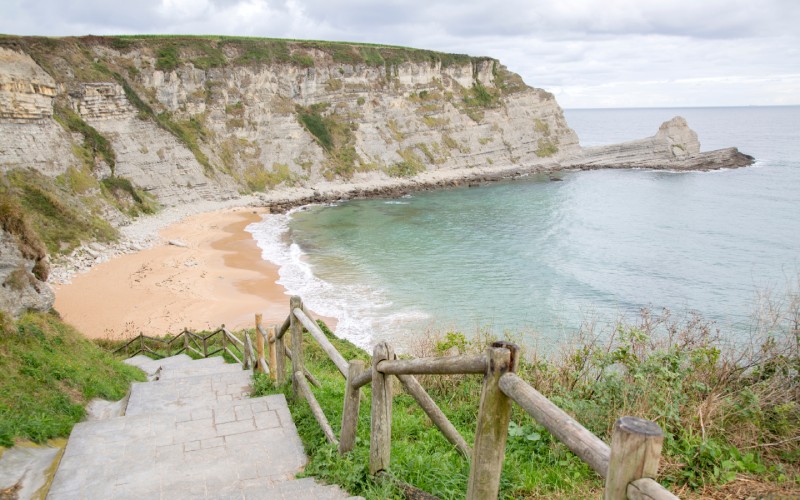 Although it was on the beach of El Sardinero where Fiochi caught his first wave, it was soon after at Somo beach. Here, the surfing culture took root right away. The first surf school and the first surf store in Spain opened their doors in this enclave of Ribamontán al Mar. Somo also became the first natural surfing reserve in the country and is a reference point for the sport throughout Spain.

About 20 minutes from the Cantabrian capital and with the possibility of arriving here by plane, thanks to the Santander-Seve Ballesteros airport, the beach of Somo connects with the beach of Loredo along six kilometers in length. It is an ideal place to learn, especially in summer when the waves are smaller, or to improve your technique. Its long waves allow all kinds of maneuvers for those who know how to do them. 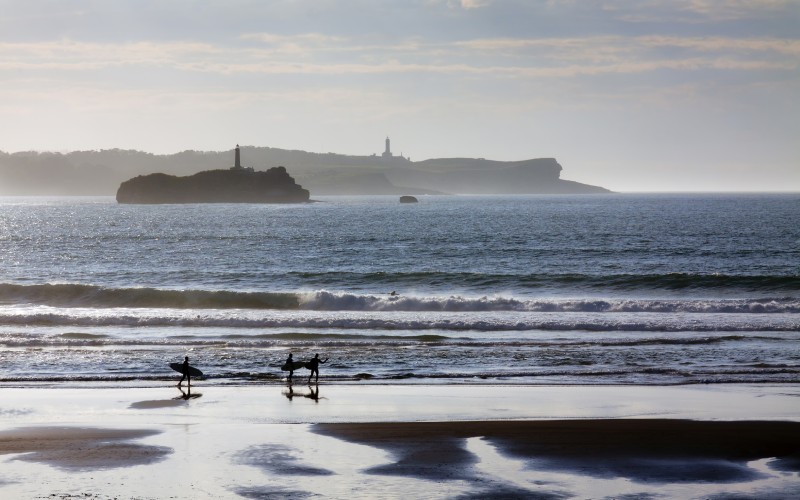 Surfers stroll along the shores of Somo beach. | Shutterstock

When they get there, a group of kids gather around a boy on the sand. The students look on attentively, with their boards pushed to one side and their tight-fitting wetsuits already buckled. Some of the teenagers have colorful stripes painted on their cheeks and foreheads as if they’re about to get into a war. And, indeed, they are. It’s sunscreen on a stick and it’s common to see it on surfers. The teacher, standing in the middle of the circle, lies down on his board and swings his arms until he suddenly stands up. He is teaching his students how to surf. With the bay of Santander in sight, on the other side of the sea, the boys and girls take their boards, tie their invention, a leash that joins athlete and board, and run to the sea. The battle of surf begins.