Roman, medieval or iron, the most spectacular bridges in Spain are very varied. They are, together with castles and fortresses, some of the best examples of civil engineering in the country. The oldest ones were part of great roads and defended the passages to their cities. Meanwhile, the most recent ones are great works that are the result of centuries of experience and technological advances. In any case, they are all great symbols of their localities. 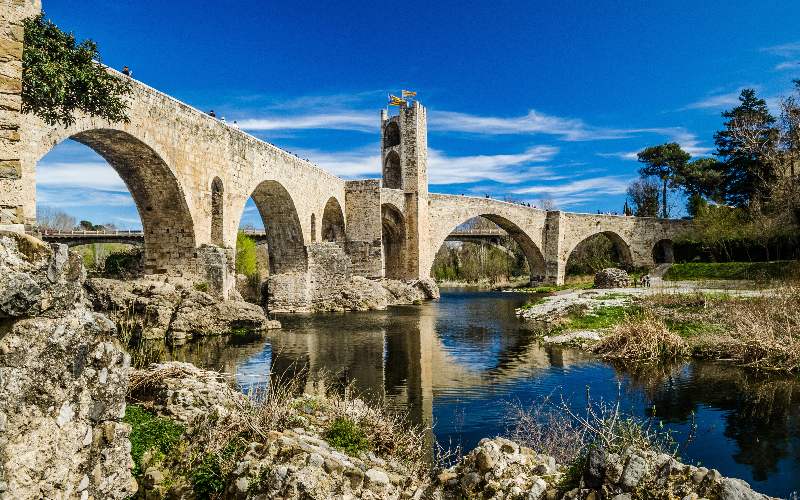 This passage over the River Fluviá shows a spectacular Romanesque style. It is one of the reasons for the medieval atmosphere that this village in Girona has. It has seven arches, one of which is embedded in the wall of Besalú itself. However, what stands out the most in its 135 meters long is the hexagonal tower that fortifies its center. Both this strong point and the door that opens at one end of the structure are reconstructions from the early 20th century. The original towers were demolished at the end of the 19th century. Later, during the Civil War, it was blown up. Therefore, in spite of being from the 11th century, it has undergone many repairs. 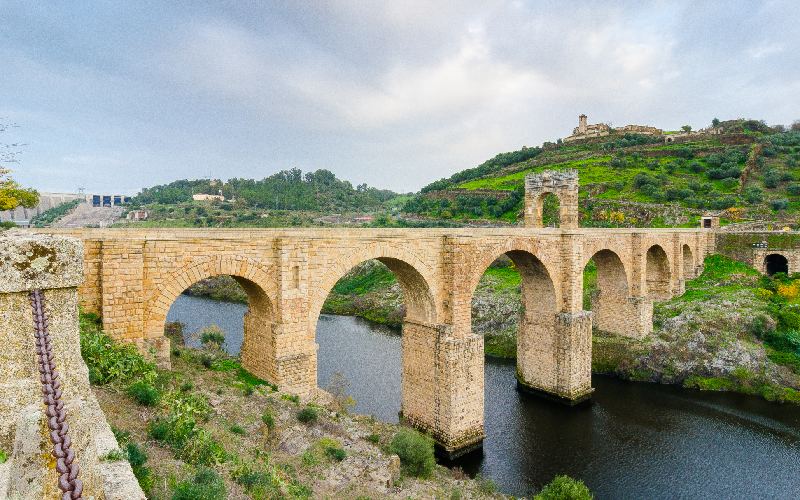 Alcántara comes from the Arabic and means “the bridge”. A fact that confirms the influence of this building on its surroundings. About 400 metres from the village to which it gives its name, it was created in 103/104 A.D. Its span or central light is almost 30 metres wide and is the second largest that the Romans made. Since then it had an enormous strategic value, as it allowed to cross the Tajo. In this way, the Silver Way, which today runs some 30 kilometres to the east, saved the mighty river.

Today the riverbed appears dry, due to the detours necessary to create the nearby and gigantic reservoirs. Nor is its appearance the original one, which was preserved until approximately the 13th century. Then the wars between Muslims and Christians meant a first destruction. Conflicts with the Portuguese and the French led to further damage and new but historicist arrangements. In the centre it has an arch, dedicated to Trajan, and near it a Roman temple. 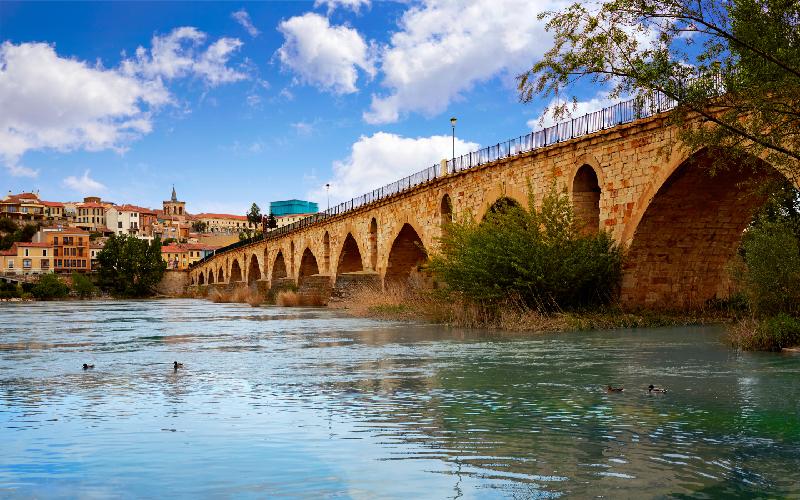 Without leaving the Vía de la Plata, but a little further north, the Stone Bridge of Zamora was for a long time the only one that crossed the Duero in the city. It has been known as the “new bridge” for much of its history, as it replaced a Roman one that disappeared in the 10th century. Although it is not clear whether the two coexisted, it is believed that Muslim pressure led to its collapse in order to increase the population’s defences.

Its appearance was marked by the 1906 remodelling. Its defensive towers were demolished, its form was greatly simplified and even an arch was eliminated, leaving only 15. Many alterations had been made due to the usual flooding of the river, but this is considered a heritage disaster. However, its ogival arches are still reminiscent of the Romanesque pass executed in the 12th century. 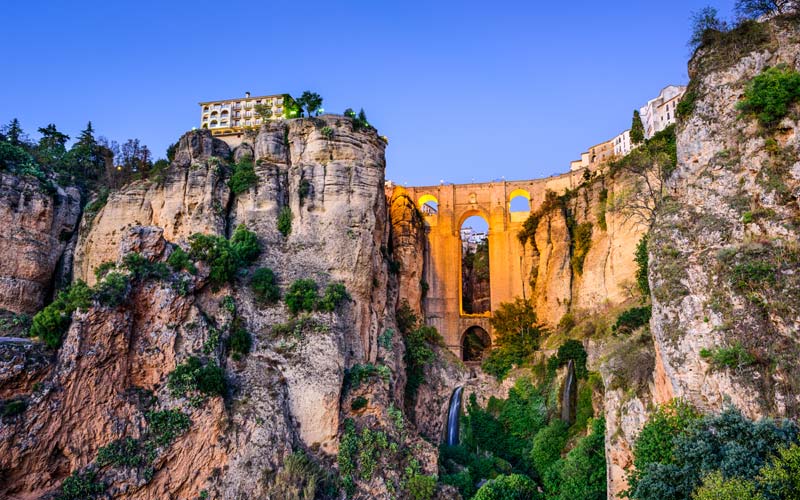 The new and old parts of Ronda are joined by this spectacular bridge. It is located over a deep gorge, whose cliffs are more than 100 meters long. Encased in it stands out this striking infrastructure from the end of the 18th century. Before it there were other attempts to build a pass over the River Guadalevín, such as the one in 1735. This one resulted in a collapse that killed half a hundred people. In 1793, with the architect José Martín de Aldehuela as the main leader of the project, the present one was inaugurated. It is one of the greatest attractions of this town in the province of Málaga. 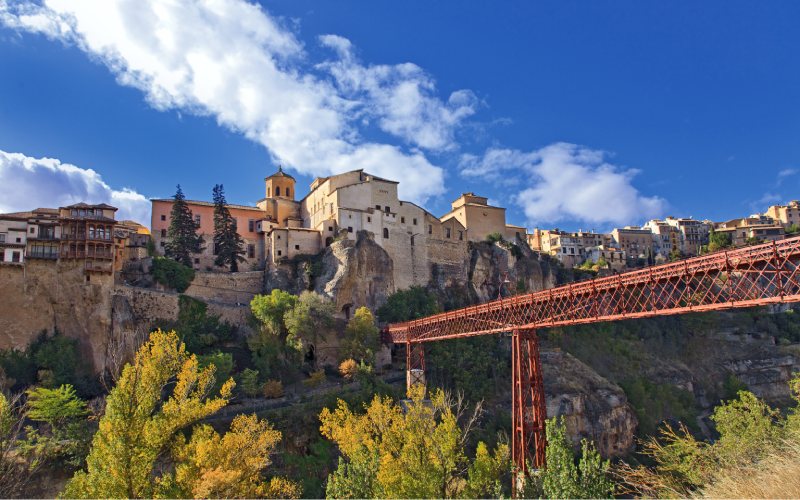 The influence of Gustave Eiffel, a famous French civil engineer, can be seen on this bridge from 1903. Metallic and based on triangles, it has a couple of spans that reach 60 meters high. Along the length, it reaches about a hundred. Its architect was José María Fuster and Tomás. It allows you to cross the gorge of the Huécar River. Therefore, it is a perfect place to observe views from below of the Hanging Houses of Cuenca. It had a predecessor at the beginning of the Modern Age, but it ended up falling down. 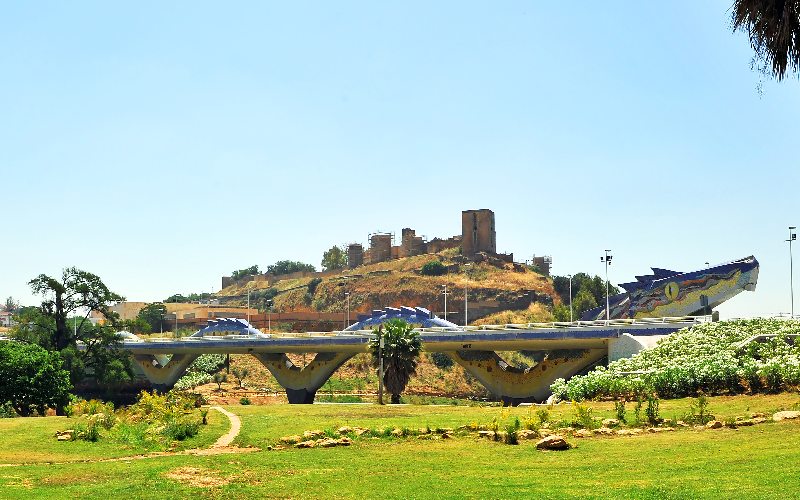 This great work of art is one of the few figurative bridges in Europe. A ceramic snake makes its way between two roadways on the ring road between Alcalá de Guadaíra and Dos Hermanas, very close to Seville. The person responsible for it was the engineer José Luis Manzanares, who was inspired by Catalan modernism. More specifically, Gaudí and the Güell Park are the main references. Thus, the dragon is a huge trencadí, a decorative element composed of mortar and tiles. Another curiosity is that the design was chosen by popular vote. Since it opened in 2007 it has also been known as the “guardian of the castle”, as it has the beautiful local citadel in the background. 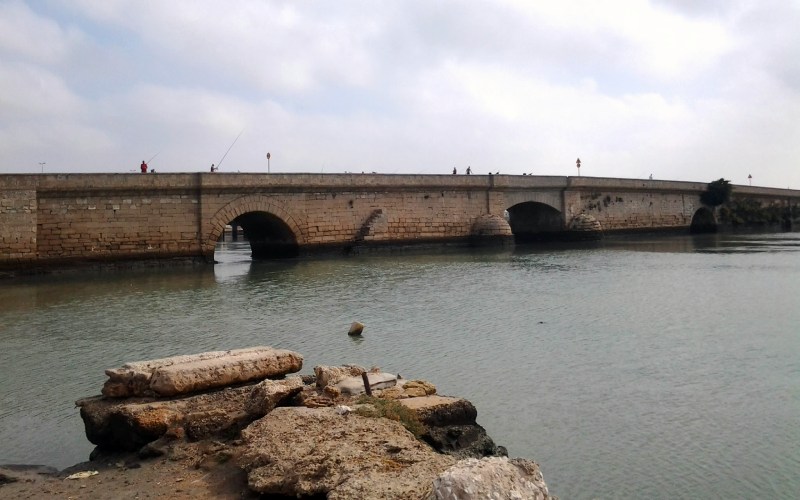 The next two bridges are in the province of Cádiz. Both are extraordinary for very different reasons. The Zuazo Bridge has a very epic past. It crosses the Sancti Petri canal, linking Puerto Real and San Fernando. It was first part of the Gades aqueduct, an infrastructure that carried water to the important urban centre of Phoenician origin, one of the oldest towns in Spain.

However, the current construction is due to Louis Gautier, who carried out some reforms in the 15th century. As these were commissioned by the lord of the place, surnamed Zuazo, the bridge took that name. Since then it has been an impregnable fortification. It defended the entrance to San Fernando and Cádiz on several occasions, such as during the English attacks of 1596 and 1625. After new defenses, its peak came when it defended the city from the French in the War of Independence. Thanks to its fortifications and the courage of its defenders, the Tacita de Plata was the last unoccupied Spanish redoubt in the Iberian Peninsula. Its defensive batteries are still standing today. 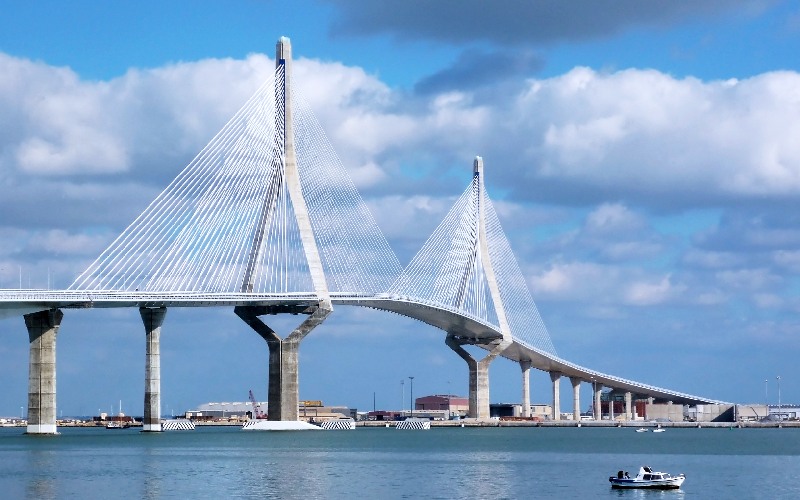 This bridge is more than three kilometres long, being the longest bridge in Spain. Of these, more than 1,400 pass over the water of the Bay of Cadiz. It was built with cable-stayed cables and took seven years to open. Since then, in 2015, it has provided a new and necessary access to the city, given the insular nature of the capital of Cádiz. Its main span is more than half a kilometre wide, allowing boats to pass through to the inland ports. Meanwhile, its cost rose to over 500 million euros. A colossal work. 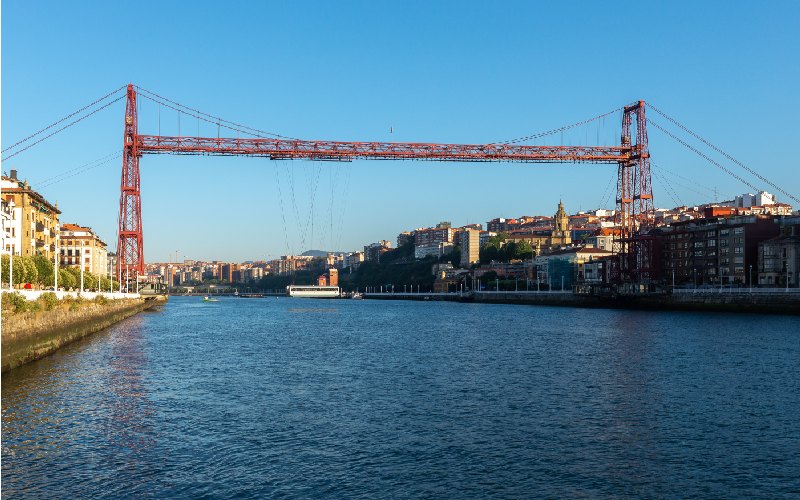 The next of Spain’s most spectacular bridges is on the other side of the country. Towards the end of the Nervión estuary, in Portugalete, is the Vizcaya bridge. Every day it operates as a ferry. You can pass through a small tollbooth from one side of the estuary to the other. It dates from 1893 and was the first of its kind in the world. Thanks to its height of 60 metres, it did not impede navigation, which was so necessary for the industrial fabric of Bilbao and its surroundings. 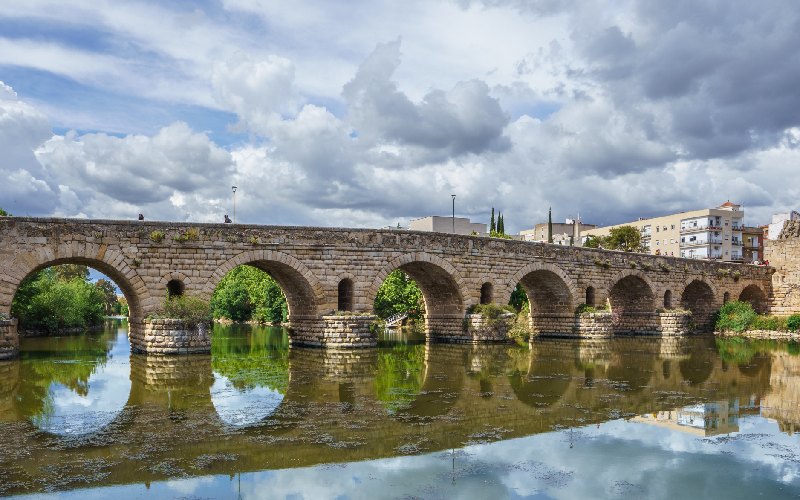 The capital of the Via de la Plata has the honour of having the longest standing Roman bridge in the world. With more than 700 meters, it crosses the Guadiana thanks to 60 semicircular arches. Its ends preserve much of the original construction, while the central part has been reinforced on many occasions. This is due both to warlike blasting and to the action of the waterway it crosses.

In the centre you can see an island around a spur. This structure, known as tajamar, used to go into the waters of the Guadiana for hundreds of meters to blame the effect of the current on this bridge in Merida. Its resistance is confirmed by the fact that until 1991 it withstood road traffic. A remarkable mark, since its origin is in the first century before Christ. 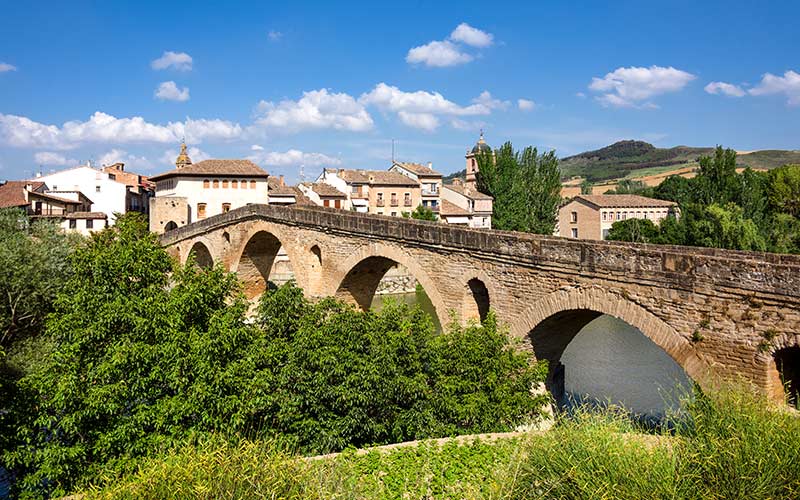 Romanesque and of medieval origin, it is the most Jacobean bridge on the list. Many of the members of this list, such as those from Mérida, Zamora or Salamanca, pass through the Way to Santiago. Located in Gares, Navarra, it was built by a queen, as the name of the town indicates. This would have been Doña Mayor de Castilla or Doña Estefanía de Pamplona. The mission from the beginning was to allow the pilgrims to cross the Arga. In Puente La Reina the French Way and the Aragonese Way were joined, which were key routes for the faithful who came from Europe. Therefore, construction was key. The legend of the txori, a little bird that used to preen the Virgin of Puy, which used to be in a niche on the bridge and now rests in a nearby church, is tied to the place. 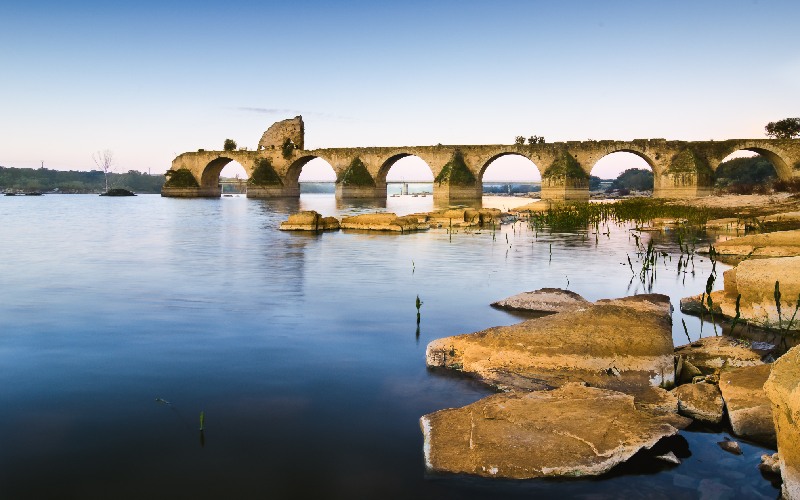 Together with Olivenza, in Badajoz, it is one of the most bordering towns in Spain. Its sovereignty is still a matter of dispute between Spain and Portugal. Like Merida, the Ajuda bridge is over the Guadiana. Despite being in a state of ruin since 1709, it is one of the most interesting points of the municipality. The final destruction was the work of the Spanish army during the War of Succession. This one came only two centuries after Manuel I of Portugal erected it. The great tower that defended it and good part of its arches are not more than stones at the moment. However, it is still a focus of attention thanks to pilgrimages and cultural events. 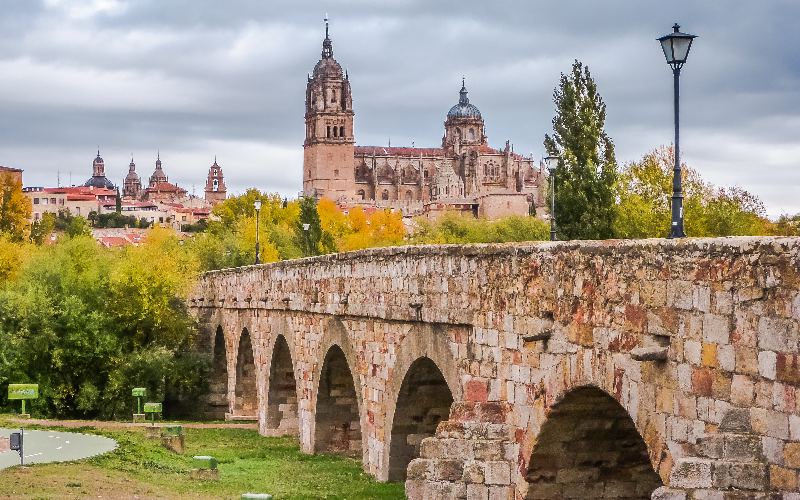 To finish with the most spectacular bridges in Spain there is one very literary. Half Roman and half medieval, El Lazarillo de Tormes runs partly over this bridge. The choleric floods of the tributary of the Duero made it difficult, but it managed to survive until the present day. In its Roman section, whose origin is tied to the Silver Way in the first century AD, there is a Veton crab. This culture generated population centres that are today ruined or not found, in addition to those that have survived. It is the oldest sculpture in the Charro capital. Meanwhile, the Hispanic bridge was created in the 12th century. With its two cathedrals in the background, it is one of the great monuments of Salamanca.