Tabarca, with the width of an athletics track and its length is less than two kilometers. In 1986 it was declared a Marine Reserve, the first in Spain. It is the smallest inhabited island in the Mediterranean and, in the past, it was used by the pirates as a smuggling place. The island of Tabarca, located in the province of Alicante and only eight kilometers from Santa Pola, is a treasure unknown to many Spaniards where you can enjoy history and nature.

The island of a thousand names

One of the names by which this land is known is Isla Plana (flat island), since its maximum altitude is 15 meters above sea level. The first Greek navigators called it Plasencia. However, it was not due to this characteristic. In fact, plasencia meant misleading, a name given because of the many rocks that the ships had to face. It is precisely among these rocks where traces have been found of the passage of another civilization in the area: the Romans. Later, during the Middle and Modern Ages, the people of Elche used the island as a hunting ground for rabbits. 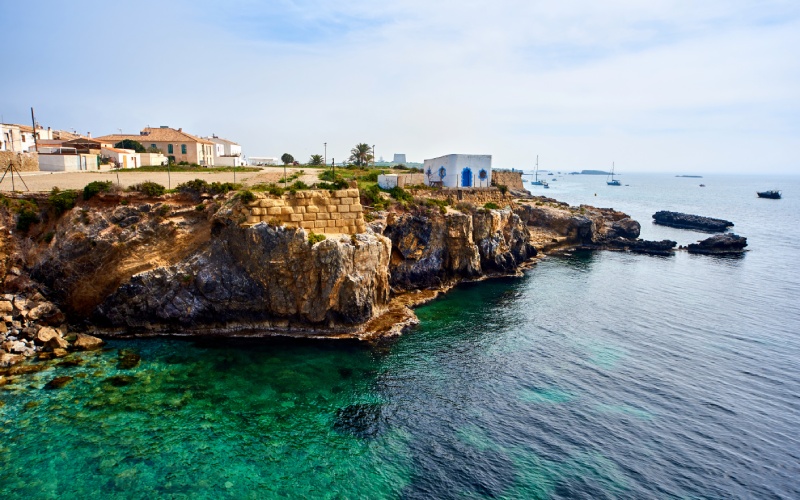 A view of Tabarca. | Shutterstock

However, it was not until the 18th century when Plasencia became Nueva Tabarca in homage to the Tunisian island of Tabarka and became the permanent settlement of Genoese inhabitants. Already in the 20th century Nueva Tabarca added to its repertoire of names the one of Island of the Poets, because in the middle of the century several writers from Alicante like Gabriel Miró crossed its coasts, inspired by the peculiarities of the island. It also acquired the name of Isla de San Pablo, for an alleged landing of the apostle. Finally, the people of Alicante refer to it as Santa Pola Island. But why does this island take the name of a place in North Africa? What is its relationship with the Genoese? And with pirates? 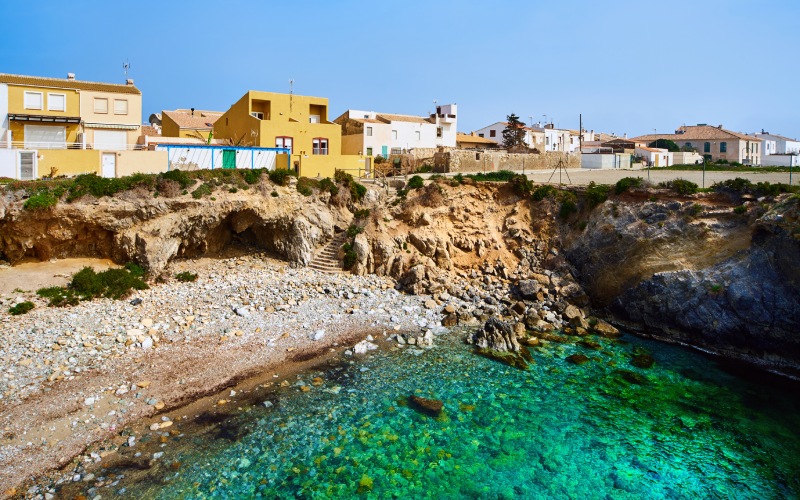 Hundreds of years ago, Isla Plana became a strategic point for the Barbary pirates, who would use the island as a base of operations from which to attack the Levantine coast. Pirates such as Cachidiablo or the Barbarossa brothers disembarked time and again on Isla Plana, from where they also engaged in smuggling.

In 1534 one of the Barbarossa brothers, Baba Aruj, proclaimed himself king of Algiers and conquered Tunis, taking over a large part of North Africa. From there, the pirate’s hosts attacked the Spanish coasts, making Aruj an enemy for the former Spanish king, Charles I. The monarch, in response, attacked Aruj, who was a great enemy of the Spanish king. And the monarch, in response, took Tunisia from him.

The other Tabarca: an island in North Africa

With the conquest of Tunisia, Charles I also took control of a strategic island in the north of the African country: Tabarka. The monarch then built a fortress there and leased the territory to a Genoese family. The latter in turn brought other Italian families to Tabarka. There they worked in the exploitation of the coral banks. This is how the years passed until the arrival of the 18th century, because in 1741 the Tunisian King Ali I made slaves of the inhabitants of the island, who were taken to Algiers to be sold.

Fortunately, these Genoese would find salvation thanks to the intervention of King Charles III. In exchange for payment and the return of prisoners, the monarch rescued the slaves. About a thousand were sent to Cartagena and about 300 to Alicante.

At the same time, Charles III had fortified the old Plasencia with the intention of protecting the island from pirates. However, the lack of resources in the area prevented people from wanting to live there. Thus, the monarch decided to transfer there the prisoners who had disembarked in Alicante, who were exempted from taxes and military service. They baptized the island as Nueva Tabarca, in honor of what had been their home. 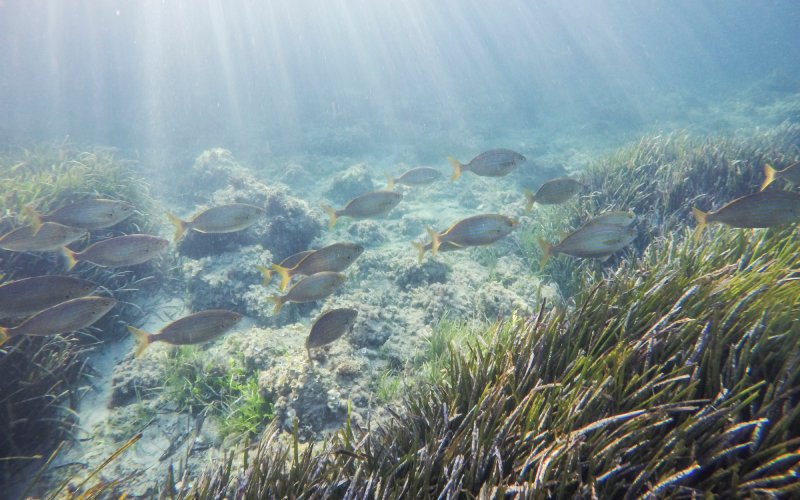 Fish swim in the waters of the island of Tabarca. | Shutterstock

The island of Tabarca has based its economy mainly on two activities: fishing before, and tourism now. It was in the middle of the 20th century when Tabarca reached its peak. The economy was booming thanks to a tuna trap. The island reached a thousand inhabitants and writers strolled through its streets.

But in the 1950s the decline in the quality and quantity of fish was accompanied by a decline in the population until the tuna trap disappeared in 1960. The island entered a crisis that could only be recovered with tourism. 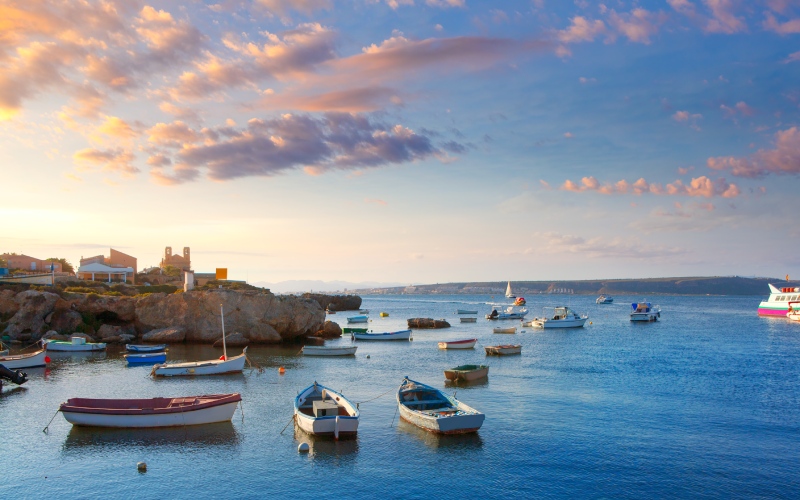 The delights of Tabarca

Despite the tourism boom in the area, which attracts thousands of visitors every summer, the permanent population in 2019 was 51 people. Each year this drops more and more. However, in summer Tabarca fills up with tourists who depart from Alicante or the harbour of Santa Pola to spend the day or maybe the night on this unknown Mediterranean island.

On the island, divided into two parts, the tourist attractions are diverse. In the first place, the wall that embraces the island stands out, perforated by three imposing baroque gates that welcome the visitor. Next to the houses of the residents of this small neighborhood, there is also the Church of St. Peter and St. Paul and the Governor’s House, now turned into a hotel.

In the other part of the island, separated from the inhabited area by an isthmus, there is an extensive area of countryside in which since the mid-twentieth century is forbidden to build with the intention of protecting the place. In this part of Tabarca are the Tower of San José -used as a Carlist prison in the 19th century-, the Tabarca Cemetery and the lighthouse. 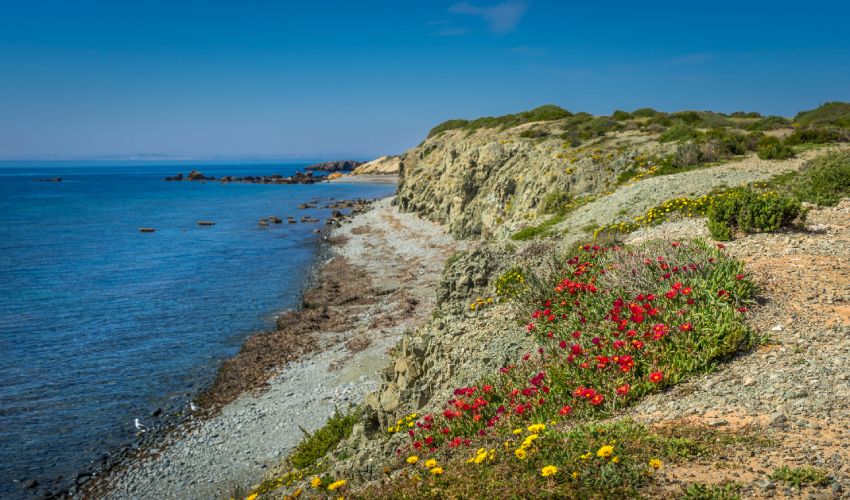 One of the beaches of Tabarca in the undeveloped part of the island. | Shutterstock

As we pointed out at the beginning of the article, the island of Tabarca has a marine reserve of great wealth of both marine flora and fauna. The oceanic posidonia covers the marine mantle as if it were a meadow and the algae are home to groupers, gilthead breams, snappers, mollusks… It is even possible to see turtles in its crystal clear waters. On the surface the presence of birds stands out. In fact, Tabarca was named a Special Protection Area for birds by the European Union. 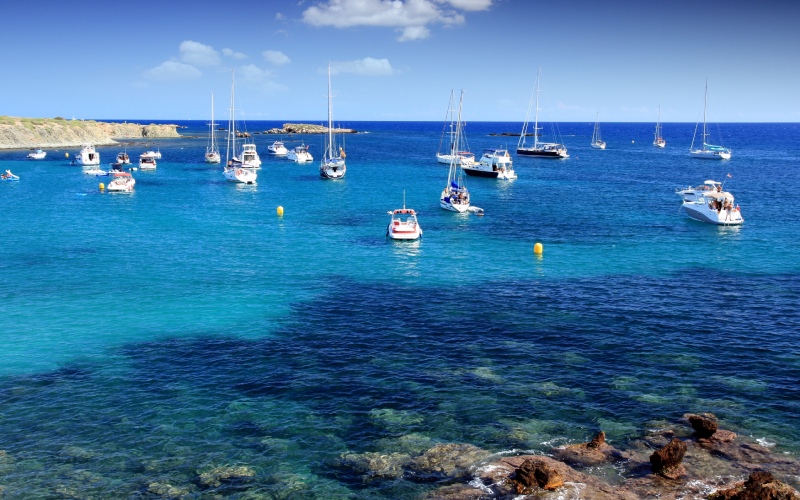 Boats in the waters in Tabarca. | Shutterstock

Undoubtedly, Tabarca is a place where it is worth spending at least one day. In fact, companies offer the possibility of going and returning in the day. But, if what you want is to know the real Tabarca or enjoy its famous sunsets, the ideal would be to stay in one of the accommodations that the place offers. At nightfall on Tabarca where there is no more noise than the waves hitting the coast or, perhaps, the wind blowing. No cars or subways can be heard, as there is no transportation on the island. The lights are reduced to those of a handful of houses. In the countryside, the stars are shining. A jewel of Alicante and the Mediterranean.