Although for some they only serve to go up or down, many believe that stairs are a symbol or even a metaphor. In fact, in some films they have acted as real protagonists. The best example is Battleship Potemkim, from 1925, with its pram descending an endless staircase without control, representing the oppressed people. In any case, they all usually lead somewhere and these are the most original in Spain. A sample, moreover, of the expertise of its builders. 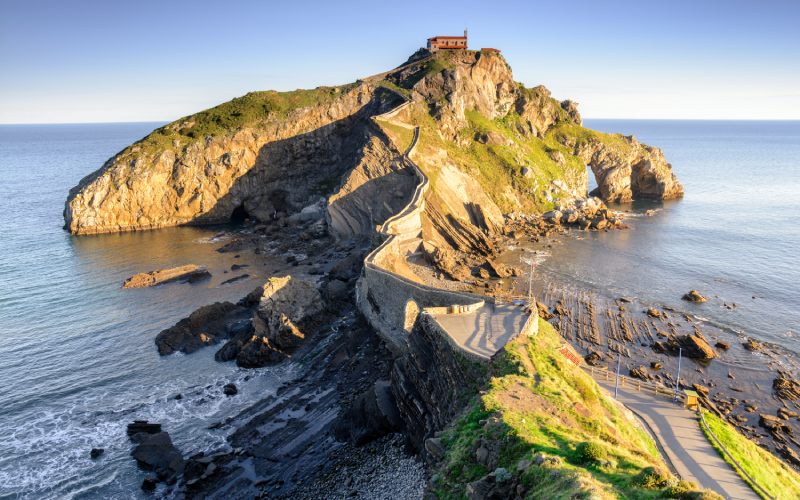 Located between Bakio and Bermeo, on the coast of Bizkaia, the islet of San Juan de Gaztelugatxe is joined to the mainland by a stone bridge, like an umbilical cord, and a zigzag staircase with 241 steps. The current hermitage is not the original one, as the first one was built in the 9th century and in the 12th century it was turned into a convent. Two centuries later, it was abandoned.

Pirates, covens and legends accompany the history of the place. At the top of the stairs, you can put your foot on the footprint that Saint John the Baptist is said to have left there, to attract good luck and ring the bell of the hermitage three times to make a wish. In the Game of Thrones series the hermitage was replaced, thanks to special effects, by a stone castle with a giant door and two stone dragons, whose fictitious name was Rocadragon. 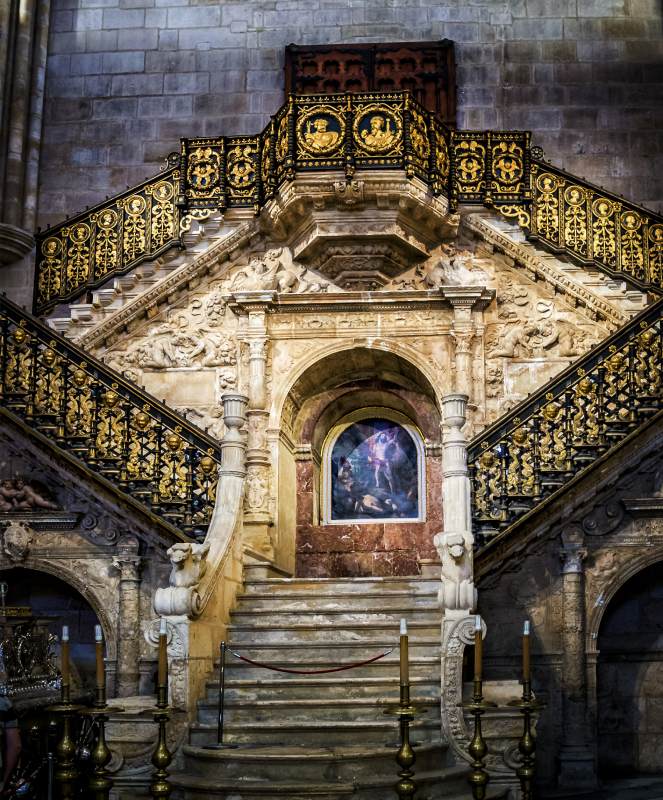 The Golden Staircase of Burgos Cathedral served as a model for the grand staircase of the Paris Opera. This staircase of 19 steps is the work of the architect Diego de Siloe. It was finished in 1523 and its wrought-iron banister is the work of Master Hilario. Inspired by Italian Renaissance models by Bramante and Michelangelo, this monumental structure begins as a single staircase, which then forks into two parallel ones at the back wall. Changing directions, they climb up to the top. It connects the temple with the Puerta de la Coronería on Calle Fernán González, which is at a higher height. 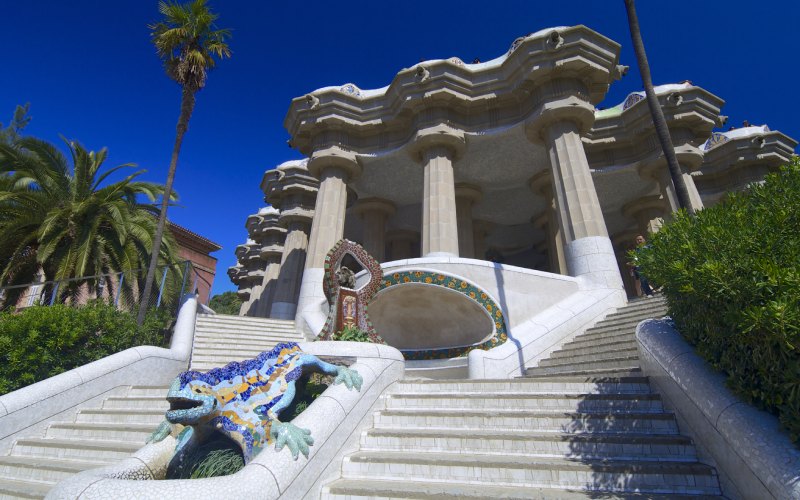 Barcelona‘s Park Güell was built between 1900 and 1914 and was inaugurated in 1928. The businessman Eusebi Güell commissioned Antoni Gaudí to design this park. Both were apparently inspired by the temple of Apollo at Delphi. Gaudí was in the middle of his naturalist period and found his inspiration in the organic forms of nature. On the esplanade leading to the enclosure there is a double staircase flanked by walls with crenellations forming terraces and under them two caves.

The one on the right is supported by a central conical column. The staircase has three sections and water from a fountain fed by a cistern runs through the central space. In the middle is the coat of arms of Catalonia and a little further up is the famous salamander, which is not a dragon. This colourful bug has become the most emblematic image of the park. 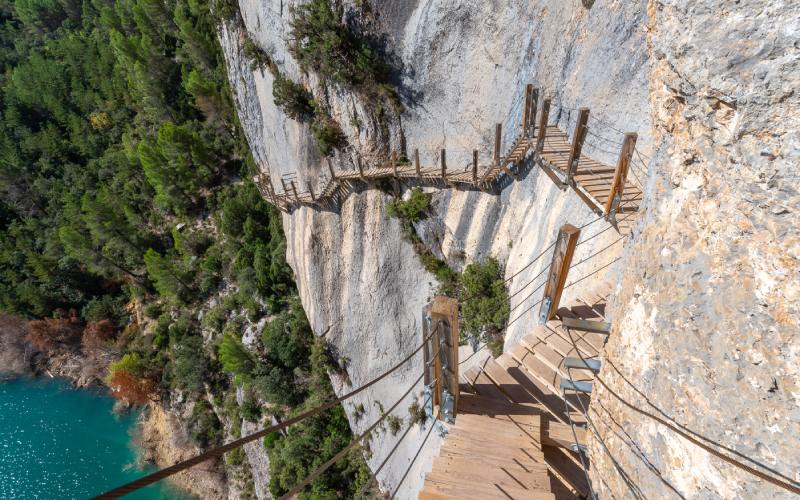 The natural trail from Montfalcó to the Congost de Mont-Rebei is as unique as it is breathtaking. It has a steep staircase that zigzags up the mountain for 88 metres. The river Noguera Ribagorzana runs along the gorge, accompanying the hiker from Huesca to Lleida. The staircase has two wooden sections for a total of 291 steps. Each of the steps is nailed to the wall of the mountain. The feeling of emptiness under the feet is impressive. It was opened in 2013 and is currently part of the catalogue of Caminos Naturales de España. 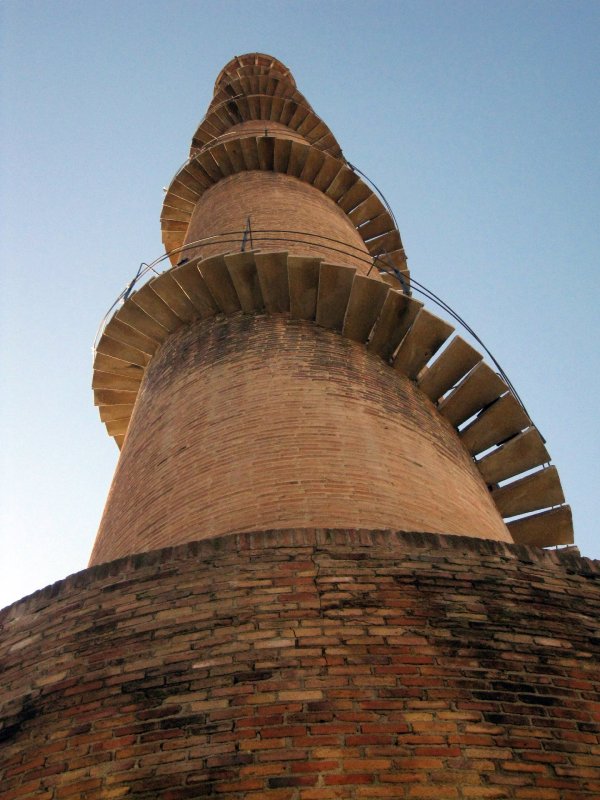 The industrial chimneys of Terrassa in the province of Barcelona are testimony to the past, when at the beginning of the 20th century the brick industry emerged strongly to cater for the growth of construction. La Bòbila de Almirall is an example of this and its author, Marià Masanas Ribas, designed in 1956 a unique chimney by the exterior staircase that surrounds the whole body. It currently holds the title of the highest spiral staircase in the world in the Guinness Book of Records, thanks to its 63 metres in height and its 217 steps.

Stairs of the Tambo Island Lighthouse 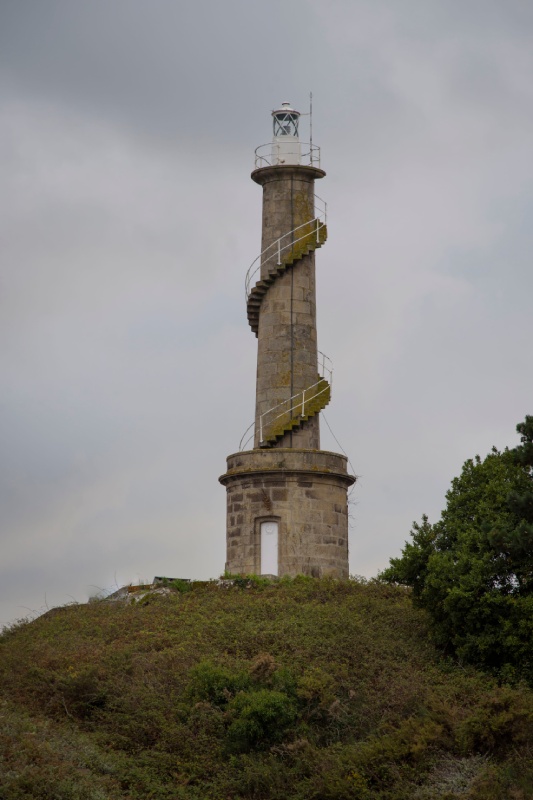 Tambo Island is located in the middle of the Pontevedra estuary, between the towns of Combarro and Marín. The Do Tenlo lighthouse is located on one of its small projections. This peninsula is isolated with the high tide and there is also a small pier. The curiosity of the staircase is that it is an exterior staircase and not an interior one, as it happens in most lighthouses. The beacon has a masonry tower of 20 meters high inaugurated in 1922. It was not until 55 when it was equipped with a lens that was replaced in 1980 by a more modern system. 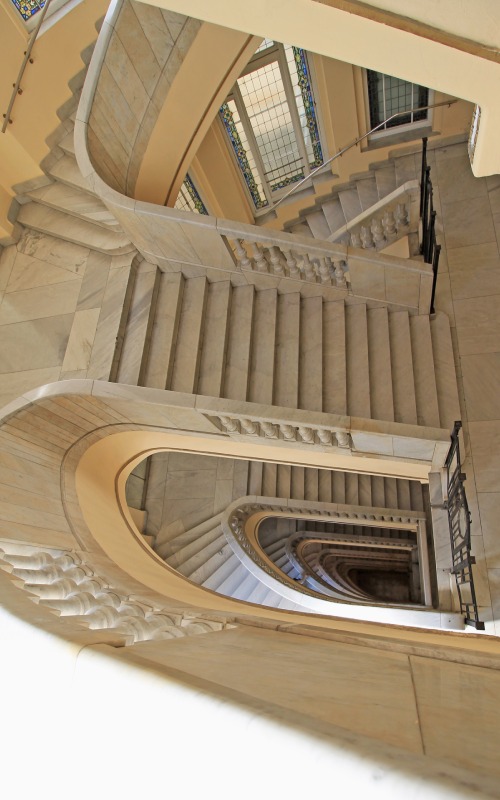 Staircase of the Círculo de Bellas Artes in Madrid. | Wikimedia

The Círculo de Bellas Artes of Madrid is a private, non-profit cultural organisation based in Calle de Alcalá. Founded in 1880, it carries out important work in the field of creation and dissemination of culture and art. Pablo Picasso or Ramón María del Valle-Inclán were regular attendees. It has a wide repertoire of paintings, sculptures, ceramics, drawings and furniture. The current headquarters has enormous historical value and is the work of the architect Antonio Palacios. It was declared a historic-artistic monument in 1981 and catalogued as an Asset of Cultural Interest. Its imposing monumental staircase stands out at the entrance, emanating the same sensation of grandeur and functionality as the whole building. 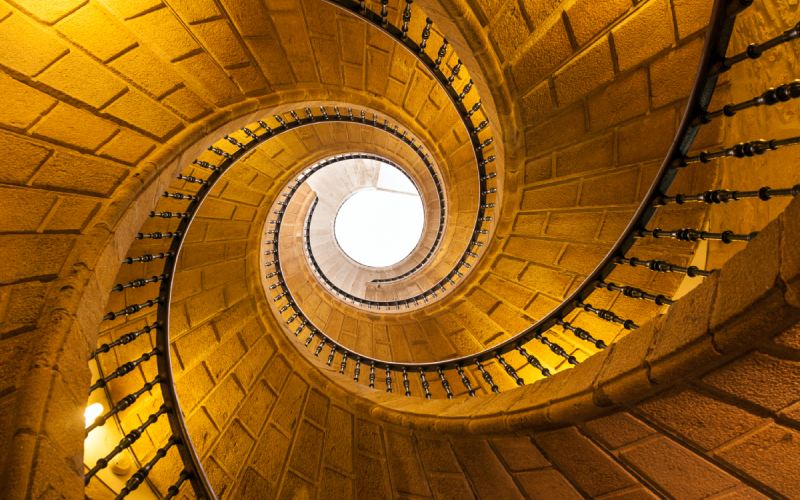 The Convent of Santo Domingo de Bonaval in Santiago de Compostela has a staircase with character and personality. The first documents referring to the place date from the 13th century; although the staircase belongs to the 17th and 18th centuries. It is a spiral staircase, designed by Domingo de Andrade, with a triple helical shape. The three access ramps lead to different floors of the Museo do Pobo Galego, and only one of them reaches the viewpoint.  Here, the traditions and history of the Galician people are made known thanks to a series of exhibitions. 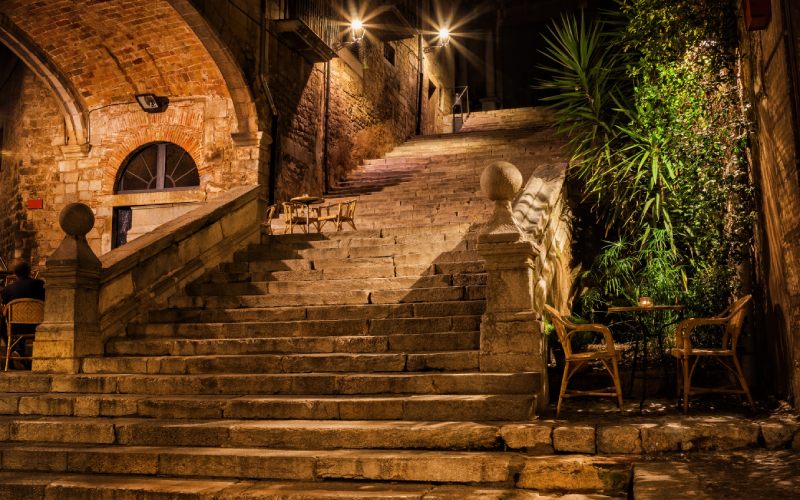 The main attraction of this staircase is the oblique arch that connects the church of the former convent of Sant Martí Sacosta from the 17th century with the façade and the baroque stairs of the Agullana palace, from the 16th and 17th centuries. This space of the Pujada de Sant Domenec, in Girona, is another of the locations that have chosen, among others, the Game of Thrones series.

Staircase of the Lighthouse of El Caballo, Santoña 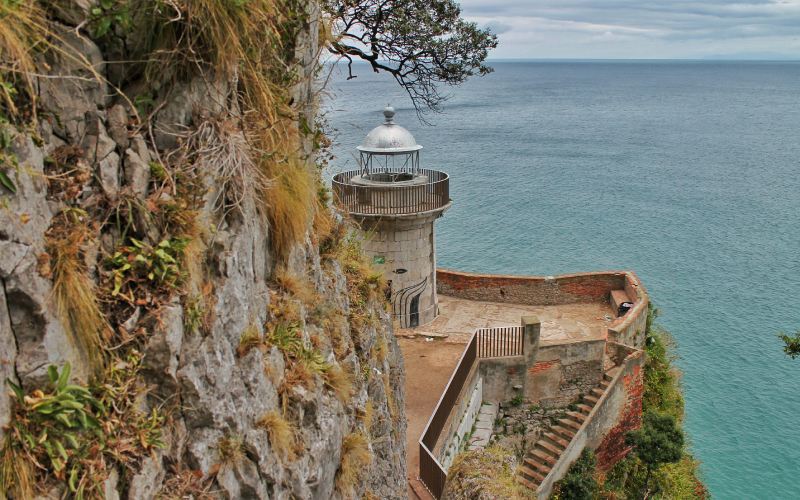 The Lighthouse of El Caballo in Santoña in Cantabria began operating on 31 August 1863. Its 700 steep steps were placed by the prisoners of the local Presidium Barracks. The building was divided into two blocks, one to house the lighthouse keeper and the other the lighthouse tower itself. In 1993 it ceased to be operational, although it remained under the General Directorate of the Coast, and suffered numerous acts of vandalism. In 2013 other inmates, in this case from El Dueso Prison, fitted out the surroundings and steps as part of the Nácar project. 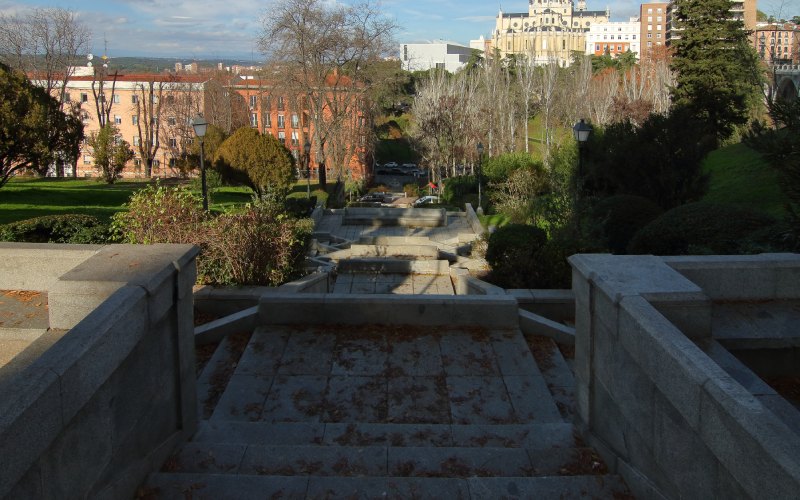 On the Cuesta de los Ciegos in Madrid, the zigzagged pedestrian stairway that links Calle Bailén with Calle Segovia in 254 steps stands out. This is one of the most pronounced slopes in the city. The name comes, according to a legend, from the miracles worked by Saint Francis of Assisi among the blind who were on their way to the monastery. Another legend, on the other hand, speaks of the blind and rogues, as well as their custom of begging for alms in that place.

This is not exactly one of the most frequented places in the capital. Until the beginning of the century, it was just a slope where teenagers used to slide down, hence its name “Cuesta de Arrastraculos”. There is also a hidden passage with flint masonry walls. This staircase also has a cinematic history, as it was where Andrés Pajares trained up and down Stallone-style in the film by Mariano Ozores Yo Hice a Roque III. 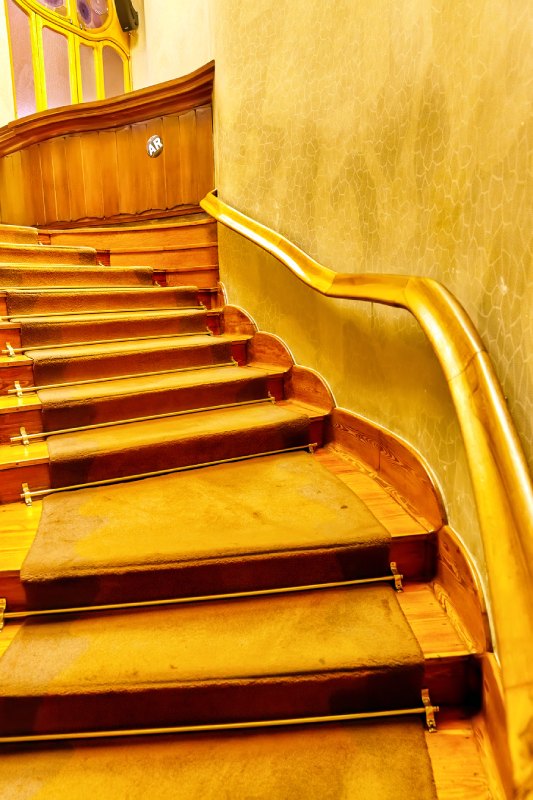 The Casa Batlló in Barcelona was built in 1877 and rebuilt in 1904 by Josep Batlló i Casanovas. He commissioned the project to the architect Antoni Gaudí, a genius of Modernist architecture. The concept of the house was a symbolic interpretation of the legend of Sant Jordi, the patron saint of Aragon and Catalonia. According to the legend, Sant Jordi killed a dragon to save a princess.

The wide oak staircase that can be seen when entering the building has no straight lines at all. The handrail is ergonomic and fits perfectly to the size of the hand. In fact, it is interpreted as the spine of the legendary dragon. The tower with which it ends would be the tail. For Antoni Gaudí, the construction of the Casa Batlló marked a before and after. In it he completely departed from the conventional styles of the time and began to follow only his architectural visions. 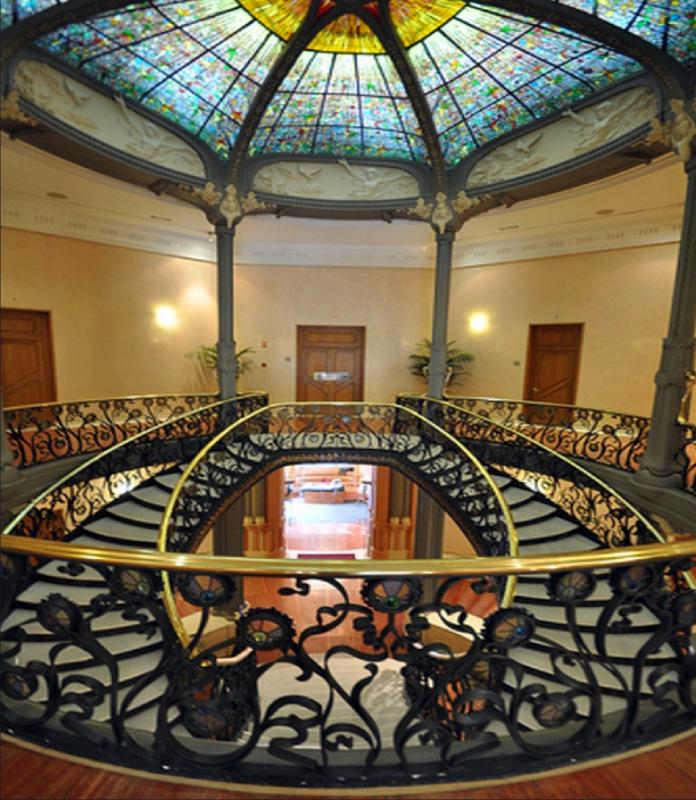 Interior staircase of the Palace of Longoria. | Wikimedia

The Palacio de Longoria in Madrid, designed by the architect José Grases Riera, was built between 1902 and 1904. It is a modernist palace, located at the confluence of Fernando VI and Pelayo streets. Today it is the headquarters of the SGAE. Without a doubt, one of its most outstanding elements is the circular imperial staircase; crowned by a dome with a stained glass window made by the Maumejean House. The circular perimeter staircase is inspired by French Modernist architecture and the works of Víctor Hora in Brussels. It is situated in the corner rotunda which acts as the axis of the whole building.