The garden of El Capricho, the only garden of romanticism that still remains in Madrid. And it is undoubtedly a whim, a place of recreation full of culture, symbols and power. The marvellous whim of the Duchess of Osuna. It was María Josefa de la Soledad Alonso-Pimentel who designed this park, a refuge of peace far from the court and its intrigues.

Considered one of the most intelligent and influential women of the time, María Josefa was at ease between the 17th and 18th centuries. A period of great changes in which the Enlightenment, the Napoleonic invasion and knowledge marked the life of the duchess. Together with her husband Pedro de Alcántara Téllez Girón y Pacheco, a military man and ambassador of Charles IV, they built this very special place that we are still lucky enough to enjoy today. 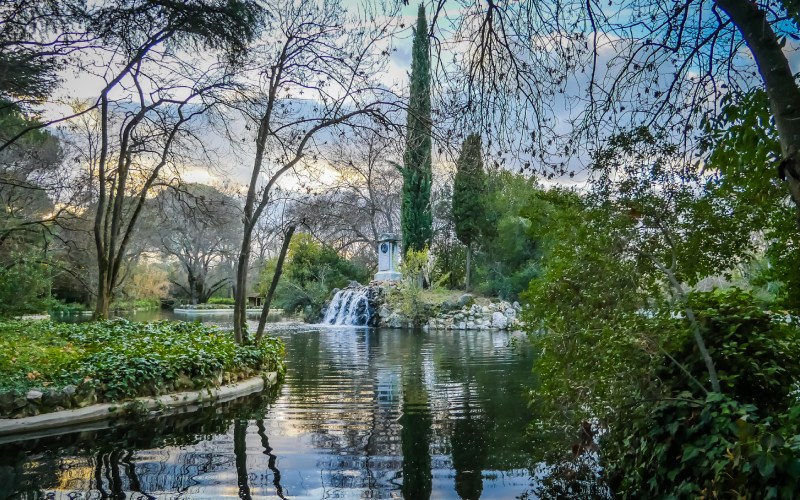 View of the gardens and main lake of El Capricho. | Shutterstock

Thanks to the couple’s travels around Europe, the duchess was imbued with the architecture in vogue at the time. As one of the most influential figures at court and in the country, she decided it was her time. After a brief stay in a palace on the Cuesta de la Vega, the dukes moved to a neoclassical mansion in La Alameda in 1783, on the outskirts of Madrid. This was the germ of today’s Capricho. 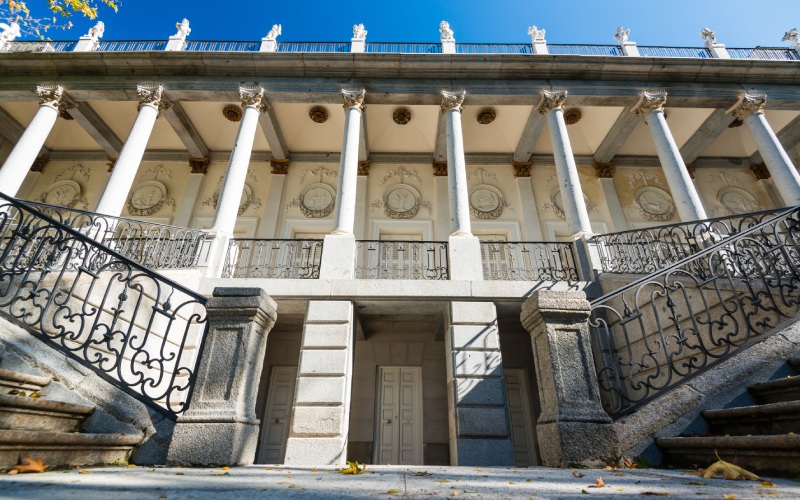 Since then, the duchess poured all her imagination, desires and projects into the grounds surrounding the palace. In addition to the modifications made to the palace, the works around it played a key role. The number of folies or whims that can be found today are of great beauty and historical interest.

The whims of El Capricho

Something common throughout Europe, as a form of flaunting and recreation, was the construction of structures known as folies or whims in landscaped areas. These were purely ornamental displays of economic power, which at El Capricho took on great importance. The hermitage, the bee-keeper’s house, the old woman’s house, the fort, the jetty and the iron bridge are some of them. A few are even without foundations, a symptom of ephemeral constructions. 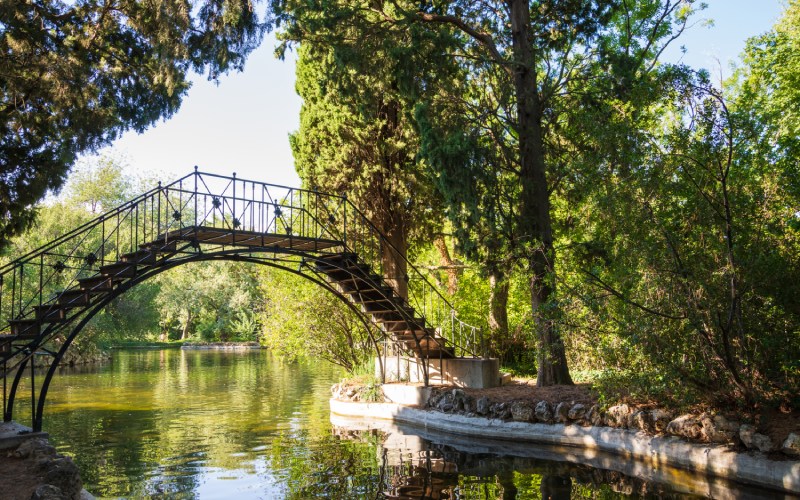 A place dedicated to culture and knowledge

Here, culture and sophistication reigned above all. In the early 19th century, the palace became a center of cultural exchange due to the dukes’ status as patrons of arts. Philosophy, music and painting were the themes that were developed in one of the largest private libraries of the time. It was Goya who undoubtedly developed a fundamental part of his work here. 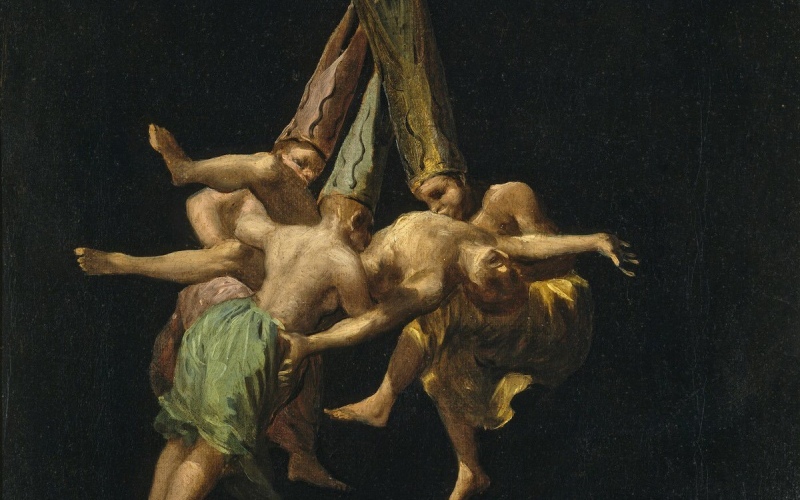 The painter from Fuendetodos was a great friend of the Duke and Duchess of Osuna, for whom he painted portraits and some of the artist’s most obscure and intriguing works. The compositions on the subject of Bruges are among the most interesting. Commissioned by the duchess for her personal cabinet, this compendium of six paintings includes the famous Vuelo de brujas (Flight of Witches) or The Coven. Without El Capricho, Goya might not have achieved his full potential. 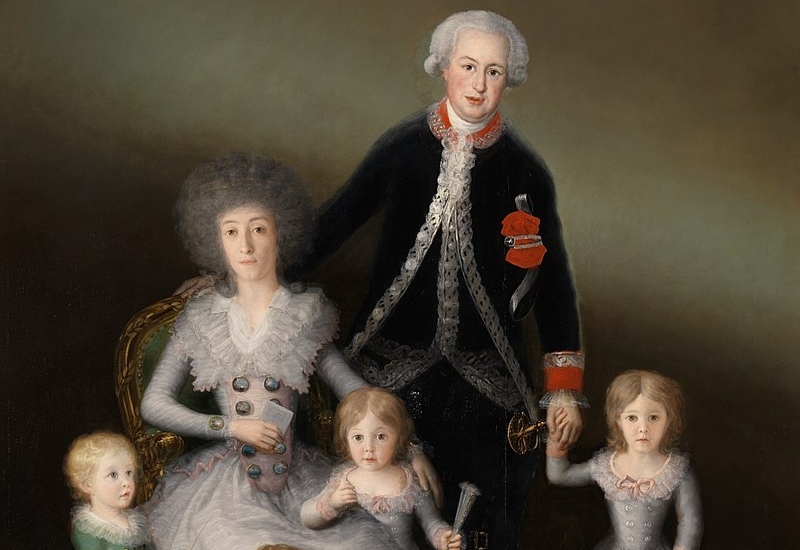 Many symbols reveal the dukes’ passion for the mystical world, esotericism and even masonry. The duchess herself was granted special permission by the Inquisition to have in her possession forbidden books full of mysticism and sacrilegious stories, more than 60,000 volumes in all. One of these symbols is the statue of Saturn devouring his son. This was directly inspired by the aesthetics of Goya’s own painting. 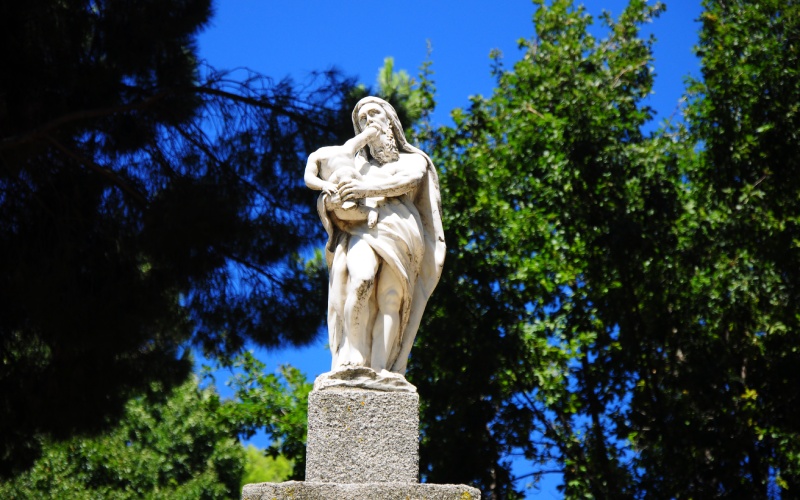 Also of interest is a small pyramid next to the hermitage, under which lie the remains of the former hermit who lived there by order of the owners. However, after excavations carried out on the site, not a single bone was found. On the other hand, both in the palace and in the dance casino, you can see reliefs with mythological and allegorical scenes depicting rites related to masonry. A real challenge for the visitor. 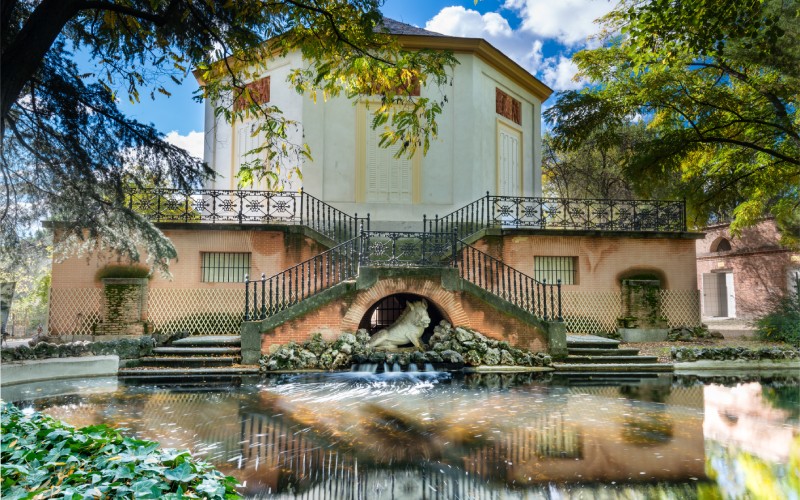 El Capricho and the vicissitudes of the war

Two wars were waged against this cultural heritage site. The War of Independence, during which the dukes had to go into exile, and the Civil War. But it was the latter that mortally wounded El Capricho. After the arrival of Fernando VII in Spain in 1814, the dukes were able to rebuild their beloved Capricho.

However, after the Civil War and the occupation of the site by General Miaja’s troops, the palace and some of the buildings suffered irreparable damage. The famous bunkers on the site date from this historical moment.

After passing through several hands and a gradual and silent abandonment, the park was finally acquired by the Madrid City Council in 1974. Once again, El Capricho survived to the present day despite attempts to demolish to build a hotel. Today you can enjoy a green space in which the several gardens (parterre, English and French garden, laurel maze…) and the foliage harmonise perfectly.

The access to the site is restricted to weekends and public holidays, and it is forbidden to bring food, balls or anything that might damage the facilities. There is a reason why it is a magical corner of Madrid full of beauty.

Community of Madrid, gardens, history, Madrid, nature, parks and gardens
It may interest you...

9 outdoor places in Madrid to enjoy the good weather
Madrid conquers everyone who comes to see it with its huge buildings and frenetic pace. Más información