The Liria Palace, the official residence of the House of Alba, is located in Madrid. It is located on the famous Calle Princesa, in the very centre of the capital; in an area formerly known as “Barrio de los Afligidos”. It is part of the Fundación Casa de Alba, and is also its headquarters and main image. In addition to being the home of a nobleman, it is one of the most important buildings in the capital. Not for nothing does it house one of the most important private art collections in the world.

Gardens. | Courtesy of the Liria Palace

House of Alba and the palace that united two families

The Alba family is a Spanish noble house originating from the crown of Castile and dating back to the 14th century. The current holder and heir to the duchy is Carlos Fitz-James Stuart y Martínez de Irujo, 19th Duke of Alba de Tormes. It is one of the oldest families of the Spanish aristocracy. They are also one of the most famous and well known thanks to their appearances in the papier mâché. Beyond this, they are among the most famous collectors in Spain. Their artistic treasures are kept in various palaces and castles throughout Spain. 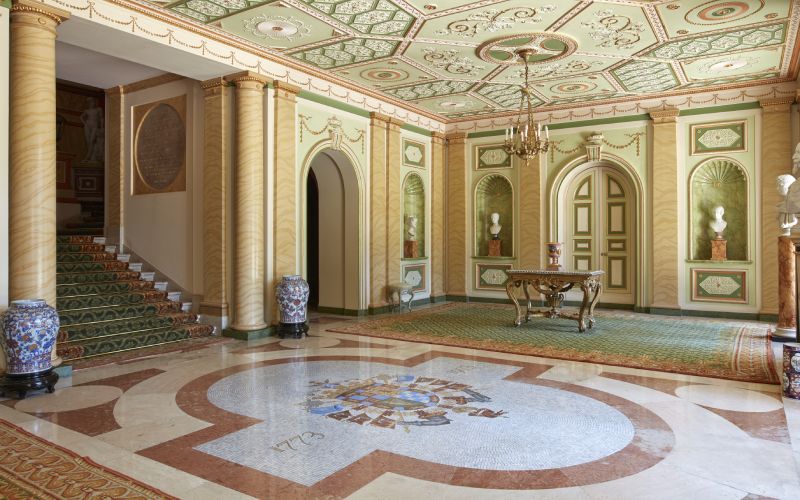 Liria Palace was built in the 18th century to be the home of the Dukes of Berwick. The first of these was James Fitz-James, illegitimate son of King James II of England. He received from Philip V, thanks to his support during the War of the Spanish Succession, the Duchy of Liria and Jérica, as well as the Toisón de Oro. Several decades later, one of his successors, Jacobo Francisco Fitz-James Stuart y Colón de Portugal, 3rd Duke of Liria, promoted the construction of this neoclassical mansion, commissioning the architect Louis Guibert to build it. 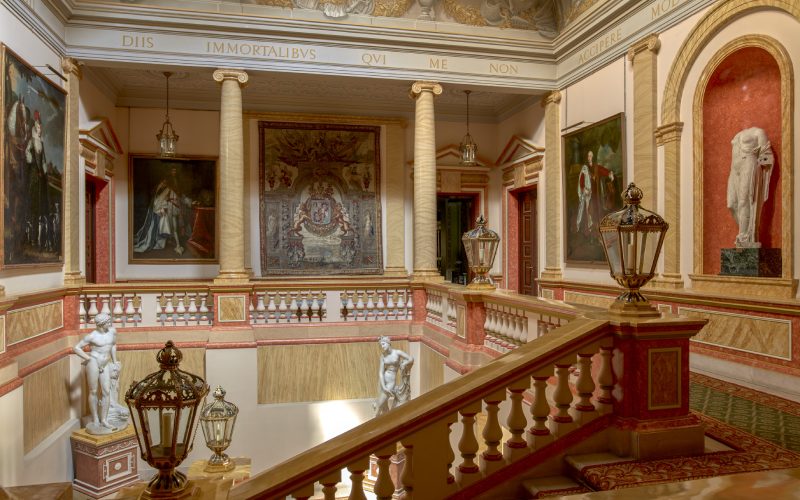 In 1771, he was replaced by Ventura Rodríguez; who limited himself to rectifying some technical errors. The work was finally completed in 1785. Later, in 1802, María del Pilar Teresa Cayetana de Silva y Álvarez de Toledo, 13th Duchess of Alba de Tormes, bequeathed the title to Carlos Miguel Fitz-James Stuart y Silva. He thus united the houses of Alba and Berwick; becoming the 14th Duke of Alba de Tormes and 7th Duke of Berwick. 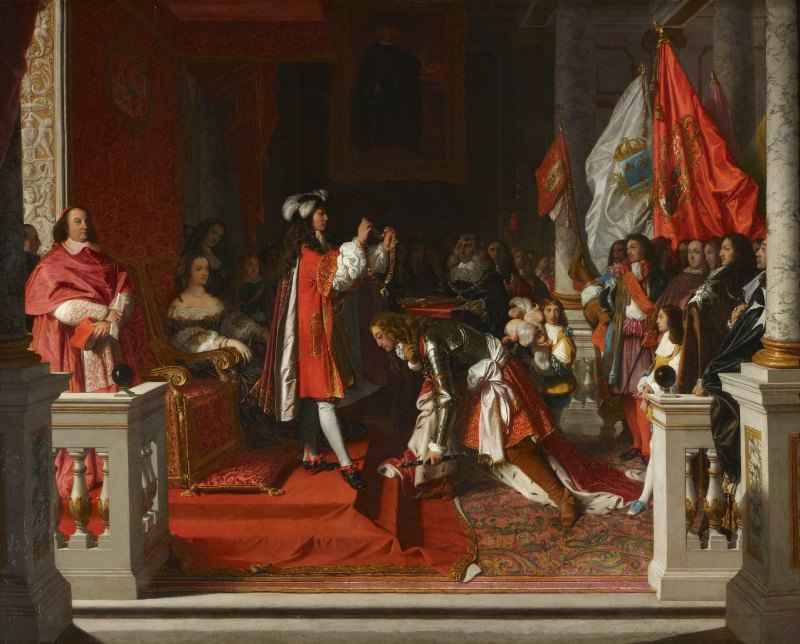 Unfortunately, in 1936 the palace was almost completely destroyed by several projectiles fired by the Nationalist side, leaving only the façades standing. The reconstruction was carried out from 1948 to 1956 and was promoted by the new Duchess Cayetana Fitz-James Stuart and her first husband, Luis Martínez de Irujo. They spent a fortune on it.

This project was carried out by Manuel Cabanyes, who made important changes to the main staircase, the chapel and the library, which was completely rebuilt in wood. Its “old-fashioned” decoration was maintained, with moulded ceilings and rose windows, as well as wooden floors, marble fireplaces and chandeliers. The effect achieved is that it hardly looks like a contemporary building. The entrance hall floor is particularly noteworthy, with marble and tesserae, executed in honour of the late Duke of Alba. 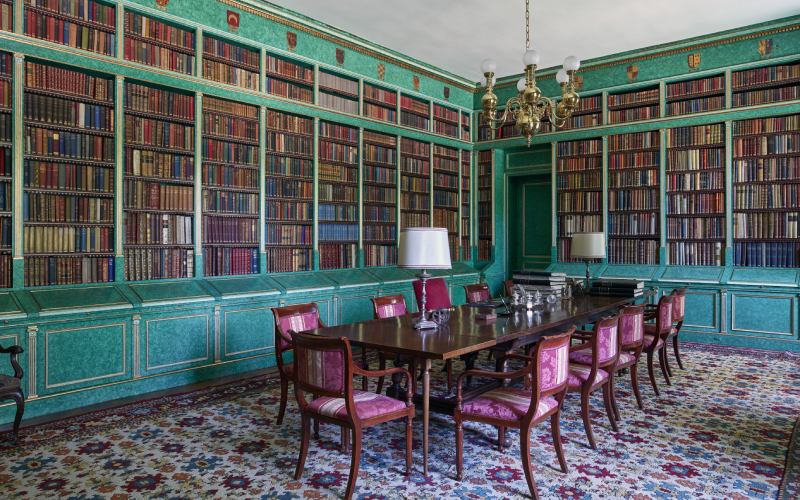 Library. | Courtesy of the Liria Palace

From palace to artistic foundation

This is one of the most outstanding civil buildings of the 18th century, surpassed only by buildings such as the Royal Palace. An example of neoclassicism, it takes many elements from Parisian urban palaces, recovering the pilasters and columns of classical tradition. This is because Louis Guibert was inspired in its construction by the petit hôtel that were so fashionable in Paris at the time. The mansion is located in the centre of the plot of land near the Count-Duke’s Barracks. Its front garden, originally a parade ground, is planted with trees in the English Romantic style. The back garden is geometric, in the Versailles style, and was renovated in 1915 by the landscape designer Nicolas Forestier. 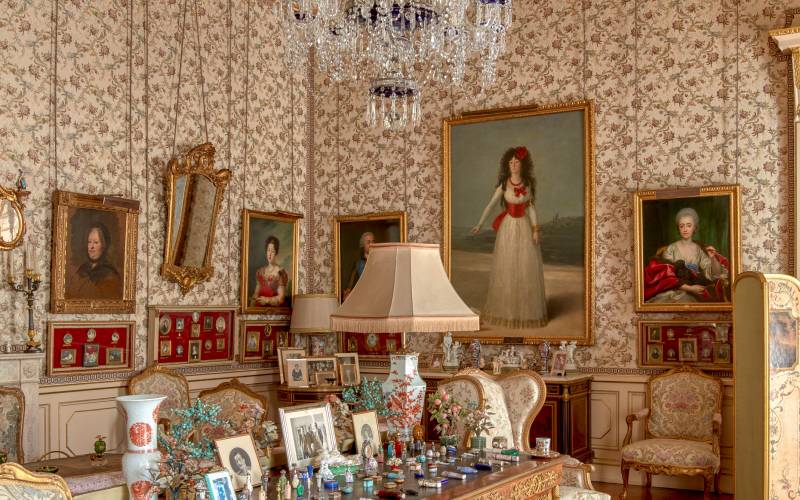 The room has a rectangular floor plan, with a façade divided into horizontal strips where the two noble heights are easily distinguished, with beautiful balconies and windows, as well as an upper floor with frieze windows. It is in turn divided into five sections; the central one being the most striking. It has four columns and is crowned with a belfry with heraldic motifs. The most important rooms are concentrated on the first floor, the so-called noble floor, with balconies overlooking the gardens. These rooms are designed to exhibit the family collections. The upper floor has smaller, more informal rooms. The library on the ground floor, with some 9,000 books, is particularly noteworthy. 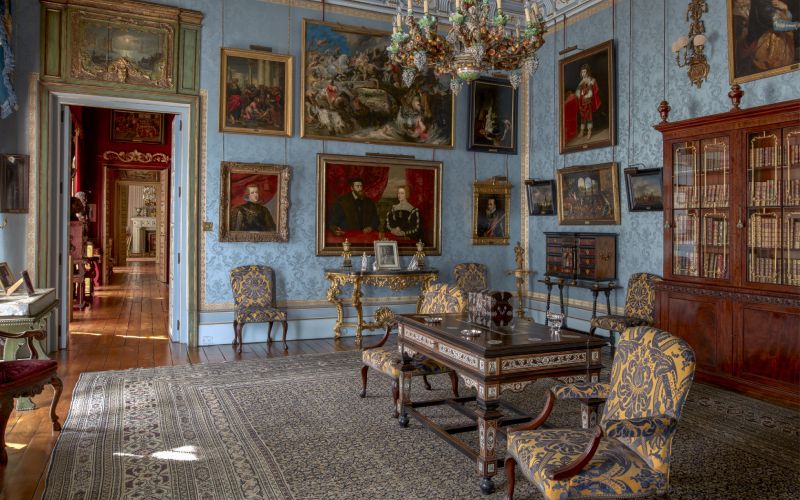 The outstanding private collection of the Liria Palace

The current collection is mainly from the 19th and 20th centuries. It is a very important collection, which in recent decades has loaned some works for exhibitions in different cities. It includes ducal portraits, such as that of the Grand Duke of Alba. Equally notable are the Italian paintings, such as the Nativity by Perugino, The Virgin of the Pomegranate by Fra Angelico and The Last Supper by Titian. 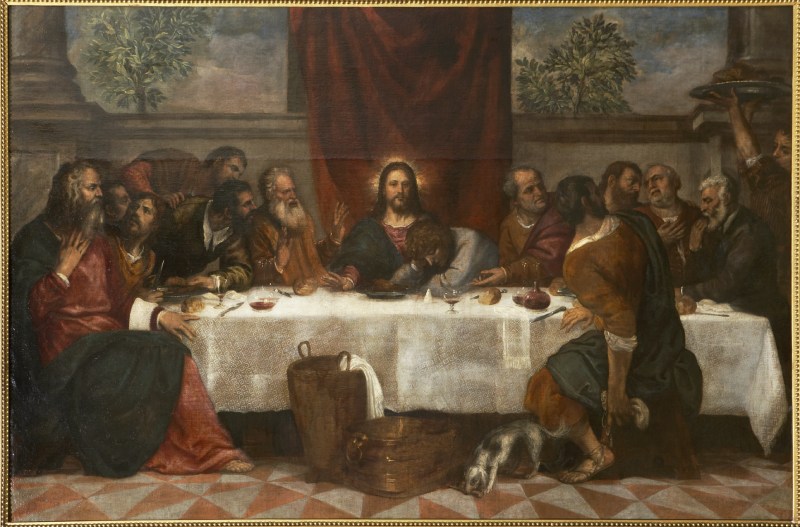 There are also examples of Flemish and Dutch painting, such as Rembrandt’s Landscape with Ruins and Rubens’ Portrait of Philip IV. Finally, the Spanish part of the collection is worth mentioning. El Greco’s Christ Crucified, Ribera’s Crowning of Thorns and Murillo’s Canónigo Miranda. 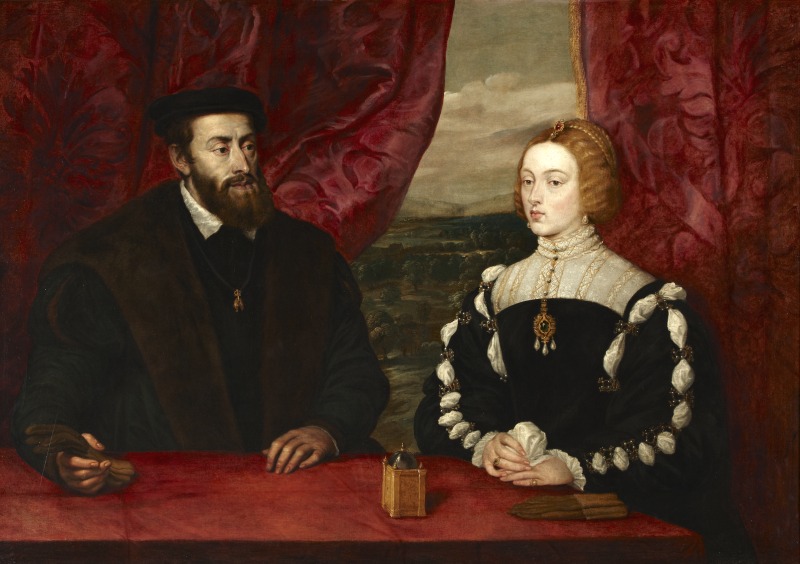 It is important to remember that the Duchess Cayetana was Goya’s muse and on her death in 1802, she left an important artistic legacy, which was very divided due to the disputes over her will. Her heir, the 14th Duke, received only 32 paintings from the collection. Nevertheless, his passion for art led him to act as patron of several artists, to buy paintings by old masters such as Titian and Rembrandt and to collect Greek ceramics and Roman sculptures. 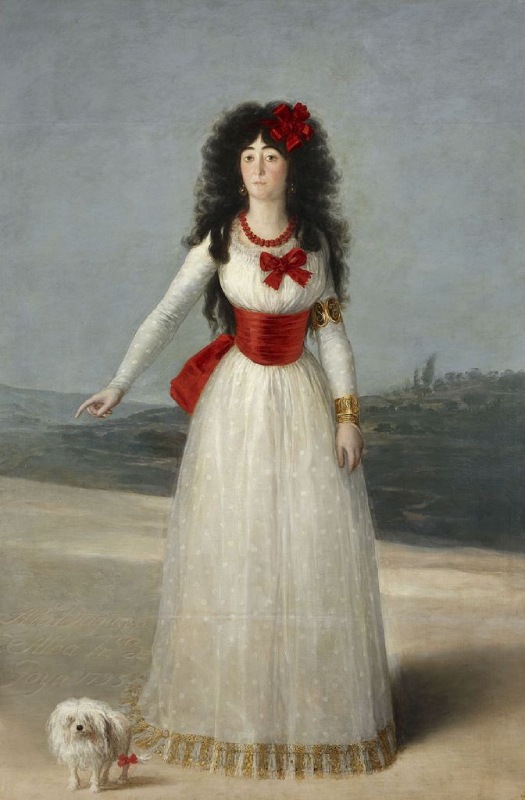 The Duchess of Alba by Francisco de Goya. | Wikipedia

His intention was to build a museum in the gardens of the Liria Palace that would contribute to the education of Madrid artists. He ended up collecting around 200 paintings, but also many debts; so he had to sell off almost half of them. The family’s financial crisis lasted for years and more works had to be put on the market. Eventually some of them returned. The collection increased with contributions from Eugenia de Montijo, such as a large portrait of her by Winterhalter, The Marchioness of Lazán by Goya and a diadem of diamonds and pearls. A jewel that Eugenia Martínez de Irujo wore when she married Francisco Rivera Ordóñez. 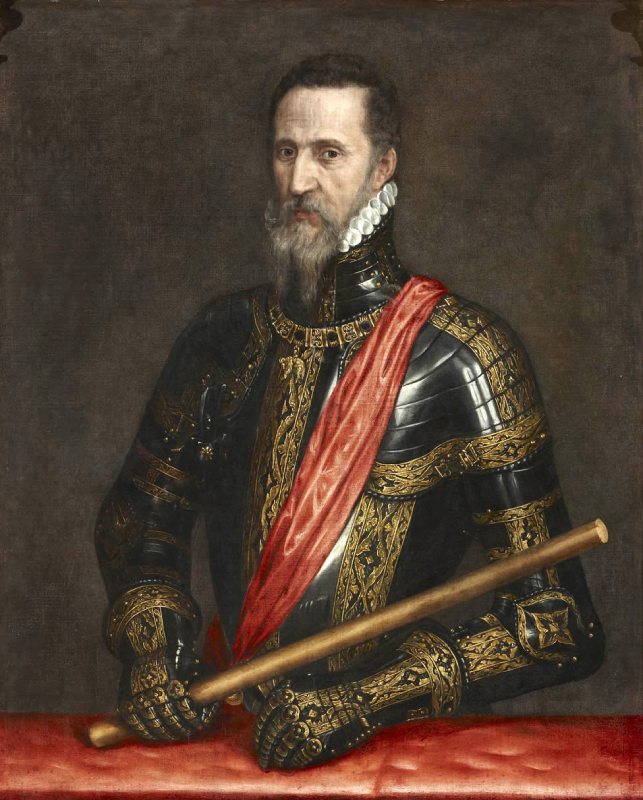 The Grand Duke of Alba by Antonio Moro. | Wikipedia

During the Spanish Civil War, the works were removed to different locations; which saved them from the fire caused by the bombings of 1936. The collection of books and works on paper, some 6,000 engravings and drawings, did not have the same fate. During the reconstruction of the palace, the works were exhibited in a nearby place called “el museíllo“. Rooms were created at that time with decorations and names in accordance with the artistic collections; such as the Salón Estuardo, the Salón Italiano, the Salón del Gran Duque and the Salón de Goya. 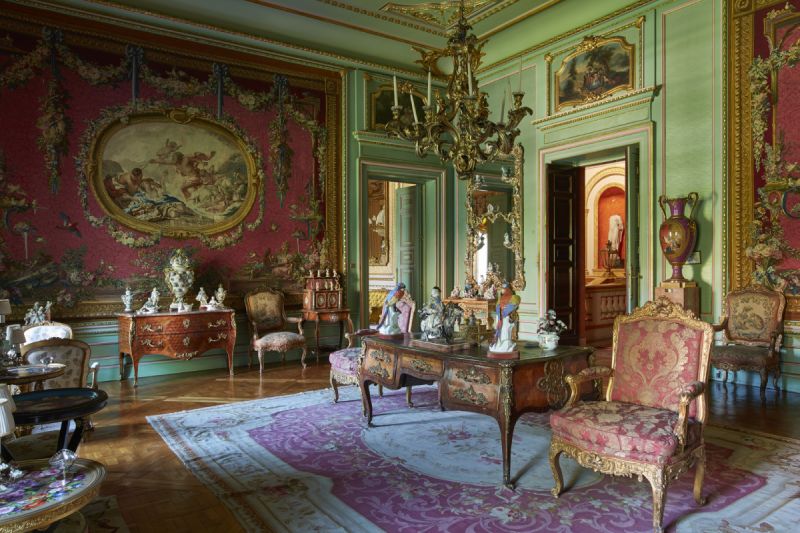 Liria Palace, the most distinguished residence in Madrid

This private residence is the largest in Madrid, with a total of 200 rooms, 26 of which are halls, spread over 3,500 square metres, and whose gardens appear alongside the public gardens on the city maps. The palace was frequented by illustrious personalities. Writers include Oscar Wilde, Unamuno, Gregorio Marañón and Ortega y Gasset. Composers of the stature of Igor Stravinski and Arthur Rubinstein, politicians such as Winston Churchill and Theodore Roosevelt and performers such as Charles Chaplin, Audrey Hepburn, Charlton Heston and Sofia Loren also passed through its halls. 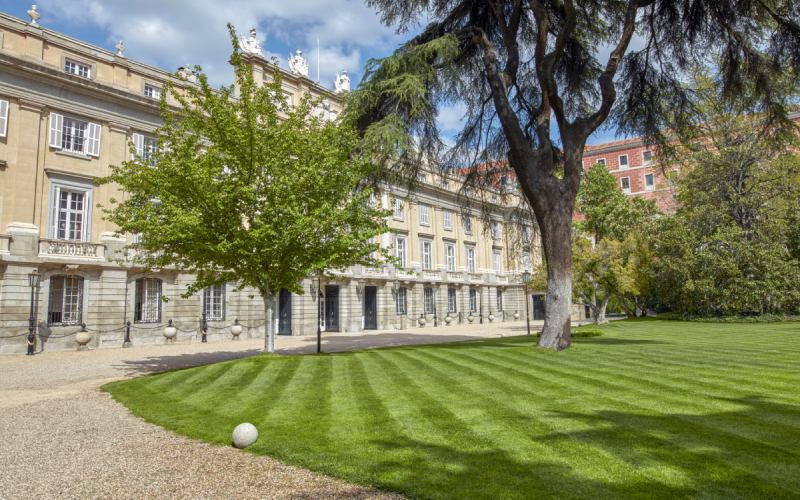 In 1953 the reconstructed palace hosted a charity fashion show featuring the new Christian Dior collection. Yves Saint Laurent attended and tickets were priced at 500 pesetas. In the gardens, dominated by a pond, there are statues of fantastic animals and in one corner there is a pet cemetery. This is the place where the dukes have buried their dogs and it has a unique set of tombstones. 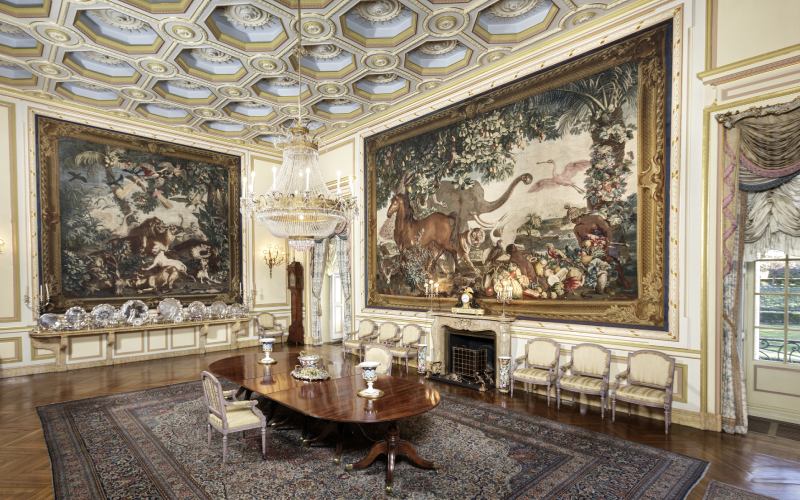 Although the palace is the headquarters of the Casa de Alba Foundation, it can be visited daily as a museum. It is also possible to rent some spaces for business and social events.