Looking down from the heights of the Marina Alta, the Montgó and its natural park are a reference in the coast of Alicante. Its silhouette marks the panorama of towns like Xàbia and Dénia. Although it looks very different from these two extremes, the massif has been able to maintain its importance over the centuries. Today ideal for walking, it has seen human activity since prehistoric times. A place that will make the famous beaches of the surroundings remain in the background.

A bit of history about the Montgó

Although it is hard to relate it to them, the Montgó is part of the cordilleras Béticas. This mountain complex, which although it may not look like it is longer than the Pyrenees, was created in the distant Cretaceous. Millions of years later, these mountains extend from the Strait of Gibraltar to Alicante. Precisely the massif is one of the mouths of the enormous stone barrier. Yielding to the Mediterranean, its 753 meters of height stand out thanks to the proximity of the sea. 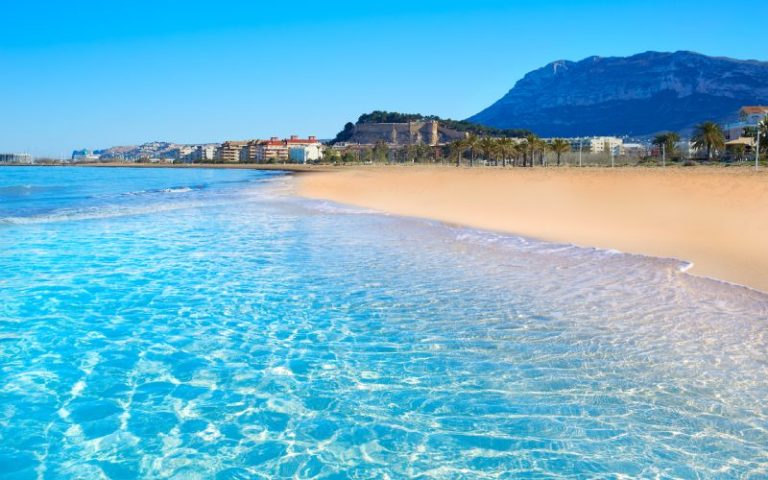 View of the Montgó from Dénia. | Shutterstock

This ability to impose itself on the landscape has earned it a local reference for thousands of years. About 30,000 have the first evidence of population in the Montgó, in the homonym cave. Meanwhile, another in the barranc Mig shows cave paintings. Later, more advanced civilizations made good use of the slopes of the massif. Several Iberian settlements are scattered around the place, highlighting the Benimaquia one.

Its name has also varied throughout history. For example, the Romans called it Mons Agonum while the Arabs chose Jabal Qaun or Monte Caon. Although remains have been obtained from both, it is believed that it was with the latter that it took on a more important role. It is noticeable the defensive capabilities they had, since they allowed to watch the coast. Because of this, and being Christian, the Gerro tower was erected in the 16th century, near the sea and Dénia. Its mission was to warn of Berber attacks and was part of a network that covered, like the A-7, the entire Spanish Mediterranean. Its agrarian value is also seen in elements such as the mills of La Plana, Xabía, whose first millstones began to turn in the 14th century. 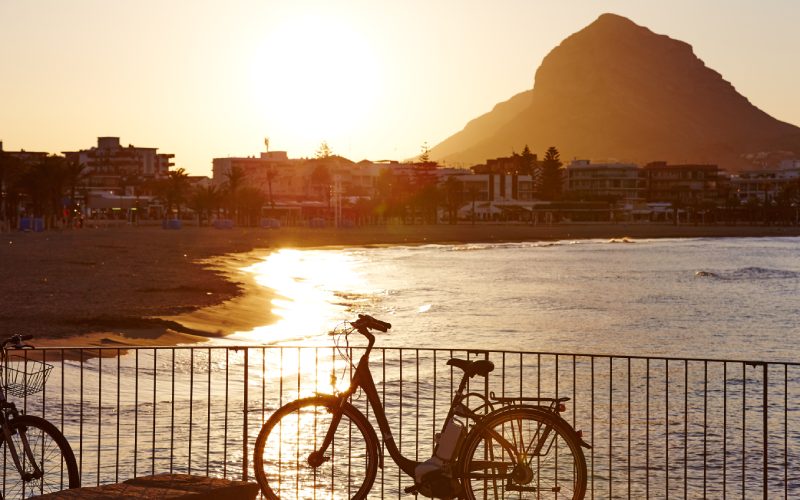 The Montgó from the Arenal. | Shutterstock

The keys to the Montgó massif

As it is a natural park, the great attraction of the massif is, of course, its nature. Hiking is the best option to enjoy it, since from Xábia and Dénia you can follow paths of great interest. These are several and allow to combine natural environment with the cultural elements said before. Therefore, it is easy to obtain a complete experience and adapted to the interest of each one.

However, what most attracts is to crown the mountain. These are the ones that present a higher difficulty. Not in vain, you have to overcome a moderate but steep slope. Alternatives start from the Dénia shooting range, from the small town of Jesús Pobre or from La Plana de Jávea. The total length of these hikes is around 10 kilometers, including the round trip. Although, the effort for which it is necessary to be prepared, gifts with incredible views. While walking along these paths in Alicante you can also enjoy the hundreds of plant and animal species that characterize this purely Mediterranean area. 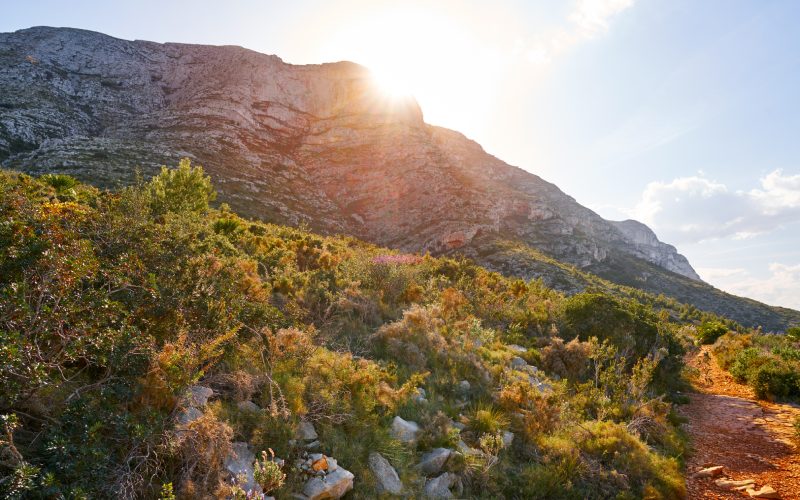 Moving on with the keys to enjoy this Weekend Getaway, we must pay attention to other trails focused on geology and archeology. Don’t be afraid, beauty is guaranteed. For example, a classic is the path that goes to the Cova del Gamell, with interesting telluric formations, typical of the bowels of the earth. It is an easy 10 kilometers-path from Denia. Without leaving there another cave stands out, the L’Aigua cave, which together with another landmark of Montgó, Racó del Bou, make up a walk of almost six kilometers. In Xábia, the route from the port to the Cape of San Antoni, which takes half an hour, stands out. A little longer is the one that goes to the aforementioned mills, from which another linear 5 kilometer walk leads to the torre del Gerro.

Spots near the Montgó

As another well-known spot in Guadalajara, the Montgó serves to divide this area of the Marina Alta. So much so that several legends are told about it, telling stories about love affairs between giants. Anyway, to the north is Dénia and to the south Xábia. Both represent perfect alternatives to the traditional sun and beach tourism. Either of the two is a perfect base for a getaway to the area. 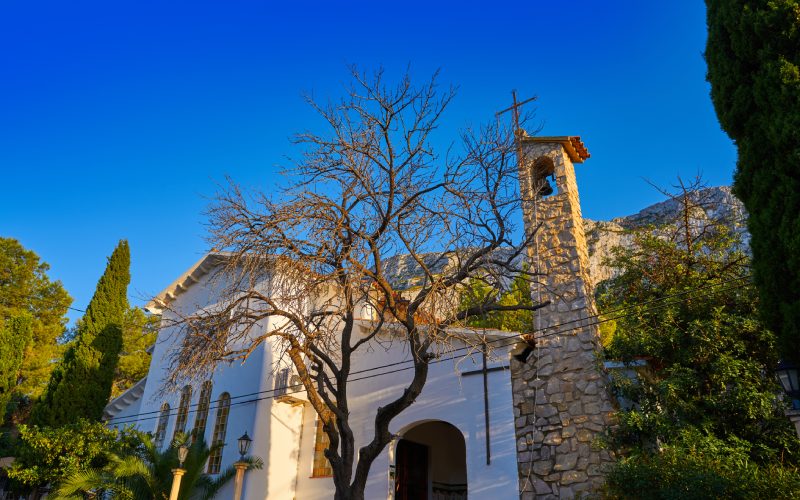 The first capitalizes the region of the Marina Alta. The large flow of tourists makes heritage attractions go unnoticed. For example, the remains of its castle. At the same time, there are a bunch of temples to see, especially several hermitages scattered in the local slopes, such as Sant Pere or San Juan. The town hall, from the modern period, or the Civil War air-raid shelter are other points of great interest. Of course, it is necessary to mention first class sandy beaches. They are divided into two areas. La Rota shines by sets of coves, while la Marina does it by more common beaches.

Xábia has one of its great strenghts in its international atmosphere. This is perfectly seen in the Arenal, its most famous beach. In the port area awaits a more classic atmosphere and a popular pebble beach. Between the cap de San Antoni and de la Nao, facing Ibiza, paths and urbanizations give way to dreamy coves. El Portixol is the best example, facing the islet with the same name. To the south, Granadella is another of the most beautiful sandy beaches in the country. Discoveries that suffer from overcrowding and instagramers alike, but that boast an exceptional beauty. 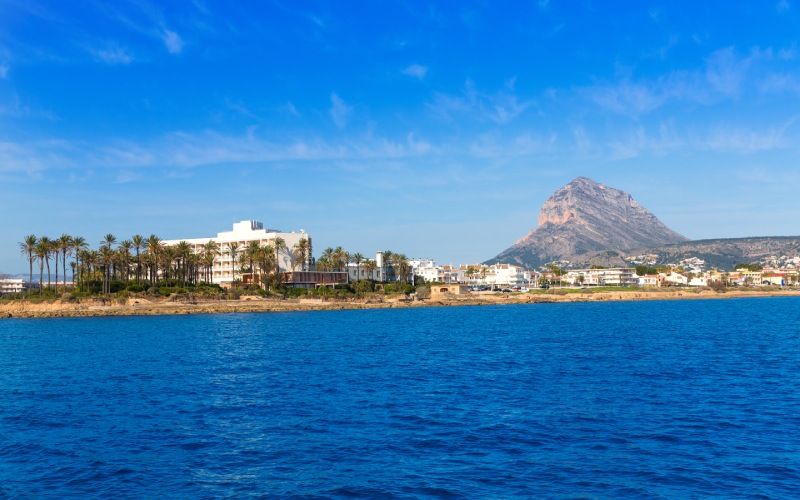 The Montgó from Xábia. | Shutterstock

Accessible from all over the country thanks to the A-3/A-7 combo, the Montgó is place that allows you to enjoy everything the Levante has to offer. Culture and hiking on one side, rest and beach on the other. A legendary mountain whose silhouette has defined alandscape all generations of locals have enjoyed. An environment that mixes the fishing past, reflected in gastronomy, with the most current tourism. In conclusion, and thanks also to the splendid local wheather, a mountain where you can relax all year round. What else could we ask for?