There are many architectural treasures in Spain that are no less valuable because they are new. The last decades of the 20th century and the first decades of the 21st century left behind buildings that can be considered true works of art. Here are some of those gems of contemporary architecture in Spain. Buildings of great interest that are scattered in cities like Bilbao, Seville or Barcelona. 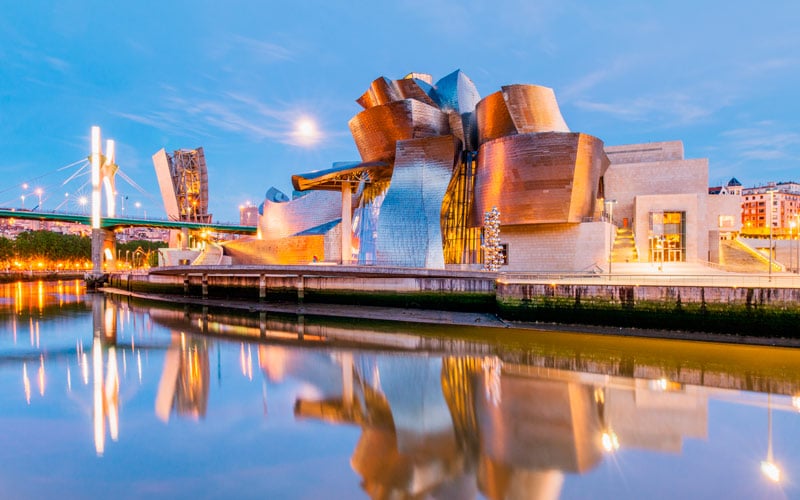 The Guggenheim Museum is one of Bilbao’s main tourist attractions, a building that does not go unnoticed at all. Designed by the famous architect Frank Gehry and built between 1993 and 1997, it draws attention to the curvilinear forms that make up the 33,000 titanium plates used. Its strategic location next to the Nervión estuary makes this setting one of the most photographed corners of the capital of Biscay. A complete collection of modern and contemporary art awaits inside.

Such was the effect on the city that the expression “Guggenheim effect” was coined. It describes the conversion of an industrial city around a large cultural building. A reinvention that embraced cranes and factory environments to create a new clean space. Thanks to this, Bilbao has served as a model for many other cities, especially in northern Spain. 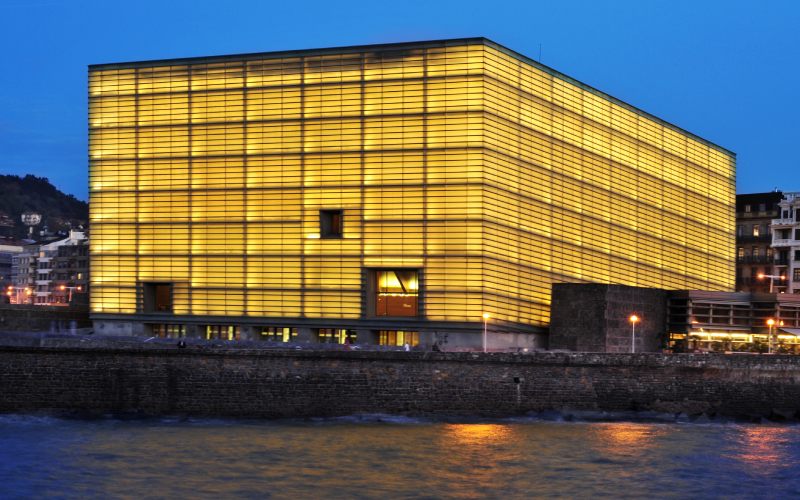 The Kursaal building is one of the icons of San Sebastian. | Shutterstock

Every night the Kursaal building is responsible for lighting the mouth of the Urumea. Conceived by architect Rafael Moneo as “two beached rocks”, this architectural work consists of two translucent glass cubes facing the wild Zurriola beach. Since 1999 it has become one more in the landscape of San Sebastian due to its privileged location. Together with the Kursaal Bridge, adorned with half a dozen street lights, it forms the perfect combination. 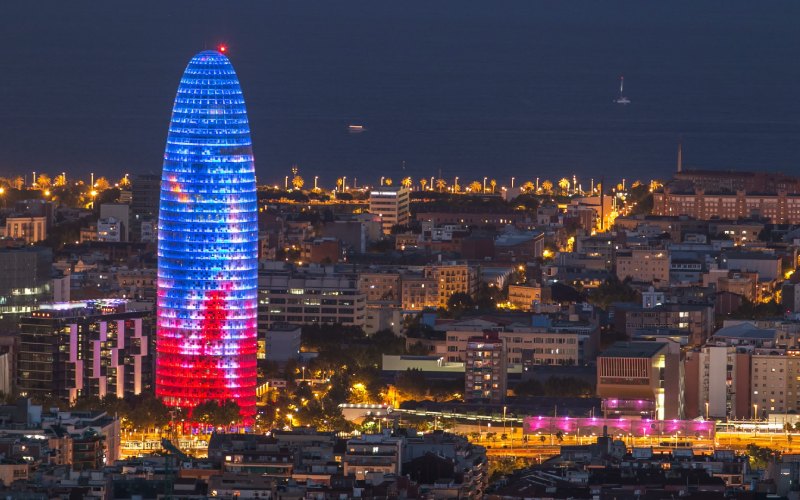 The Glòries Tower is especially beautiful at night. | Shutterstock

The Glòries Tower, formerly known as Agbar, is the most emblematic skyscraper in Barcelona and one of the main gems of contemporary architecture in Spain. It is located at the point where Avenida Diagonal and Calle Badajoz meet. With a height of 145 metres and more than thirty floors, it stands out especially at nightfall, when it is tinged with bright colours. It was built in 2005 with the idea of evoking water, given that the company Aguas de Barcelona was to be installed inside it. However, it seems that its aesthetics are more reminiscent of a bullet or a cucumber. 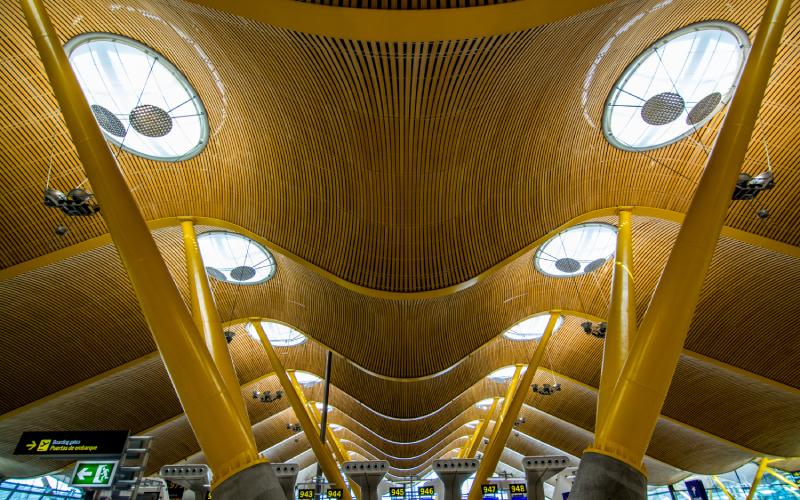 Between the check-in and the rush of any air travel that is about to begin, there is time to look up and admire Terminal 4 of Madrid-Barajas Airport. In T4, as it is colloquially known, yellow tones and wavy shapes predominate. Multiple skylights ensure that natural light reaches every corner of the airport, as well as the glass walls of the waiting rooms. It was opened to the public in 2005 and since then, around 70 million passengers pass through its more than 700,000 square meters every year. 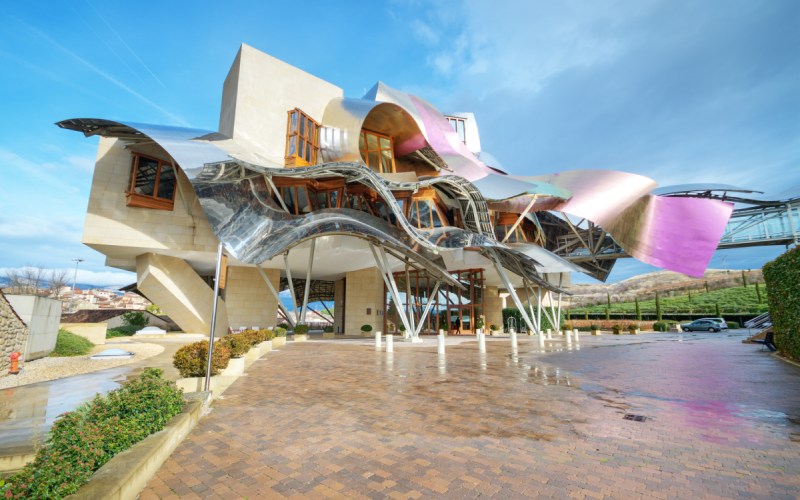 Frank Gehry’s original style once again prevails in the landscape, although this time in the small town of Elciego, in the province of Álava. The Marqués de Riscal Hotel uses fine steel and aluminium sheets that are entangled together to shape this accommodation in the land of vineyards. More than 60 luxurious rooms with avant-garde decoration, black marble bathrooms and wooden floors make up a high level experience. The hotel, opened in 2006, incorporates a spectacular glass walkway that connects the two buildings in the complex. 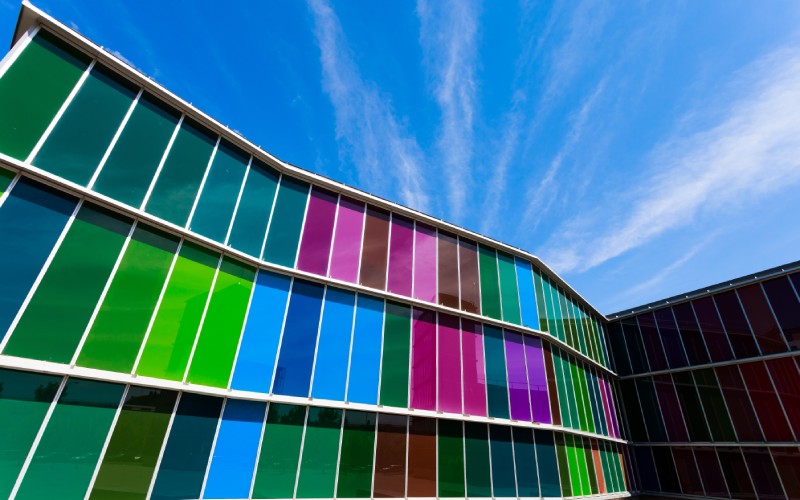 MUSAC is one of León’s main attractions. | Shutterstock

In León, the winter can be long and grey, but fortunately there is the MUSAC to provide a necessary note of colour. The Museum of Contemporary Art of Castile and León welcomes visitors with its concrete façade adorned with 3,351 coloured glasses. The result is a mosaic made up of nearly 40 different shades. Designed by Spanish architects Emilio Tuñón and Luis Moreno Mansilla, it opened its doors to the public in 2005. 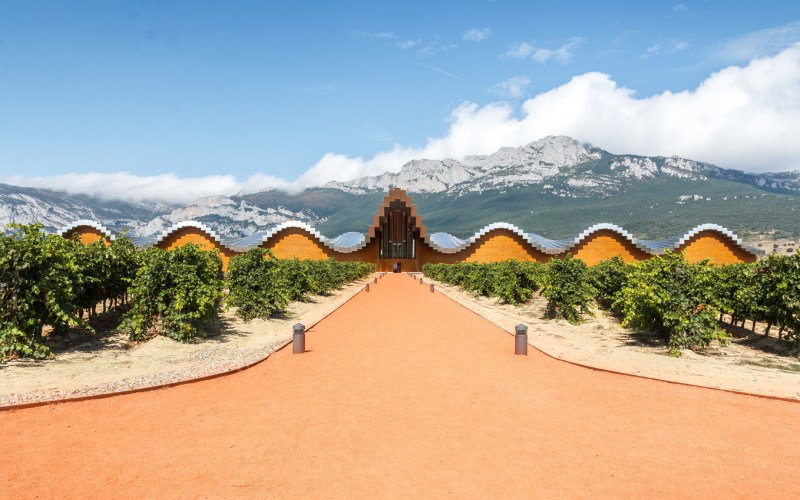 Ysios Winery is located in the heart of Rioja Alavesa. | Shutterstock

Santiago Calatrava, the most international and controversial Spanish architect, is responsible for this contemporary architectural treasure located in Laguardia. Bodegas Ysios is presented as a tribute to the Egyptian gods Isis and Osiris; closely linked to the field of wine. The building has been designed to blend in with its surroundings thanks to the gentle waves of the façade. The cedar wood slats contrast with the surrounding landscape of vineyards in the Rioja Alavesa; at the foot of the Sierra de Cantabria.

City of Arts and Sciences, Valencia 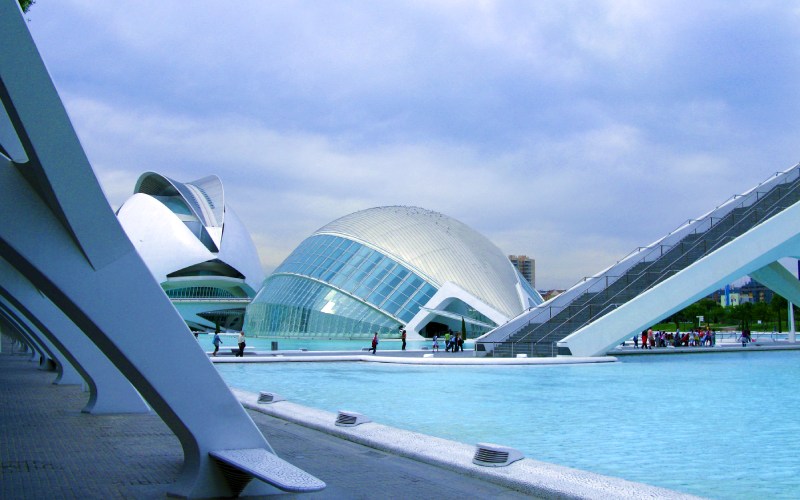 The City of Arts and Sciences in Valencia is the work of Santiago Calatrava. | Shutterstock

One of the gems of contemporary architecture in Spain par excellence is undoubtedly the City of Arts and Sciences in Valencia. Also designed by Santiago Calatrava, it is located on the old Turia riverbed over an area of 350,000 square metres. It is often said that it is a city within a city, given the numerous spaces it houses. With shapes reminiscent of a stranded ship, the Palau de Les Artes Reina Sofía is the main building. L’Hemisféric is another of the most iconic buildings, due to its eyeball design. 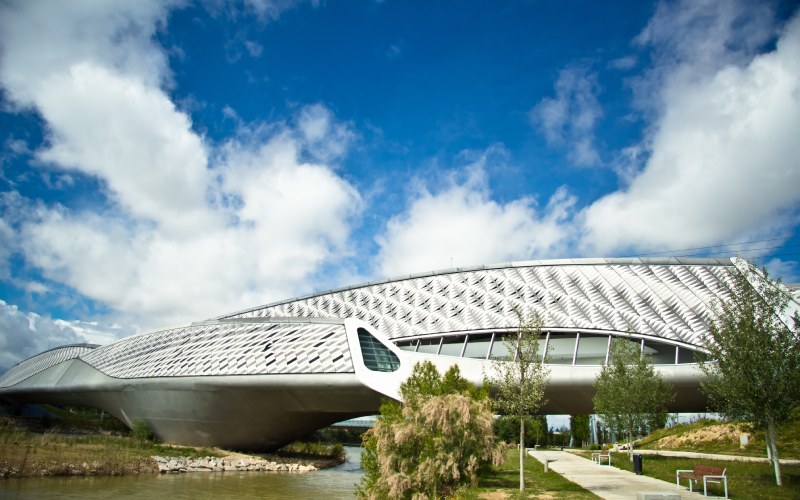 The stone bridge that crosses the river Ebro, located in the shelter of the famous Basilica of Nuestra Señora del Pilar, has had a tough competitor. Pabellón Puente extends 270 metres and is considered the only bridge of a habitable nature in Spain. It was built for the 2008 Zaragoza Expo and is currently used sporadically for exhibitions and other cultural activities. Under a rhomboid mesh structure that emulates the scales of a shark, there is a surface area of 7,000 square metres distributed over two floors. 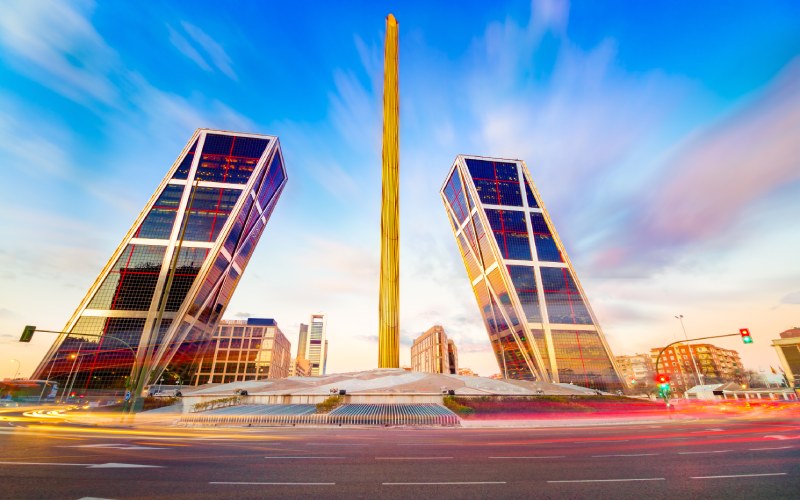 The KIO Towers are presented as a futuristic door. | Shutterstock

KIO Towers or Puerta de Europa, their official name, have been part of Madrid’s skyline since 1995. The first thing that stands out about these twin skyscrapers is their 14.3 degree inclination; a quality that has even led to them being an essential part of films such as The Day of the Beast. Located in Plaza Castilla in Madrid, these buildings reach 115 meters high and have 24 floors. Their precise location on the Paseo de la Castellana makes them look like a doorway. 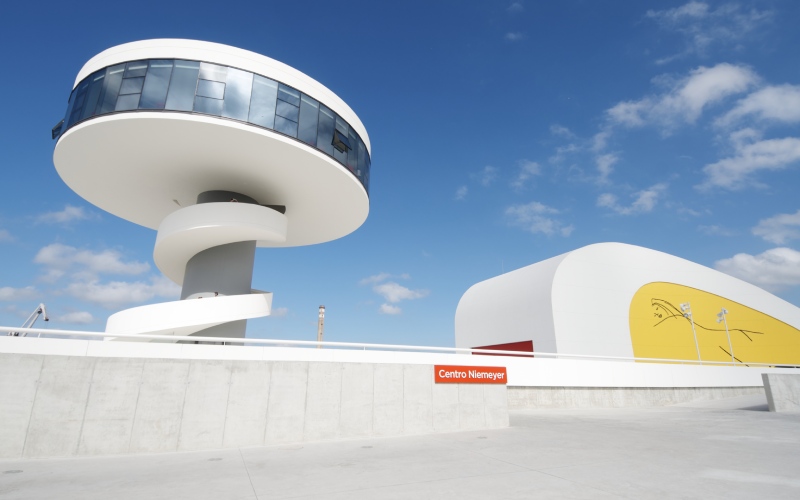 The Niemeyer Centre is the only work in Spain that bears the signature of Brazilian architect Óscar Niemeyer. Since its inauguration in 2001, it has become the cultural reference of the Principality of Asturias, given its intense agenda of activities, exhibitions and shows. The complex is made up of four buildings. The Multipurpose Building is dominated by straight lines; while the Auditorium is a versatile space in the shape of a snail. For its part, the Dome is a semi-sphere with 4,000 square metres of surface area from which a spiral staircase starts. Finally, the Tower is a viewpoint that allows you to see the city of Avilés at a height of 20 metres. 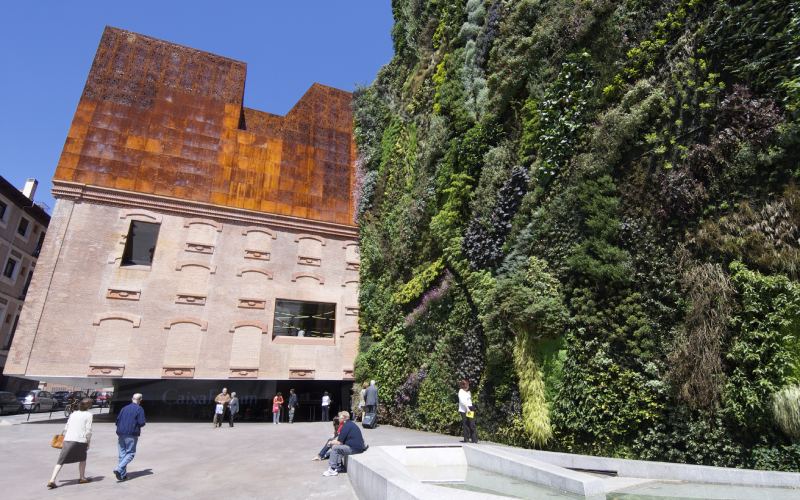 The vertical garden of CaixaForum in Madrid. | Shutterstock

In the heart of Madrid, halfway between the National Museum of El Prado and the National Museum and Art Centre Reina Sofía, stands a vertical garden that is difficult to miss. The CaixaForum functions as a socio-cultural centre and has become a reference point in this field in recent years. Inside, more than 2,000 square metres regularly host exhibitions, conferences and workshops. On the outside, the building that housed the old Central Eléctrica del Mediodía stands out for the sensation of balance it transmits, due to the strategic distribution of the pillars. 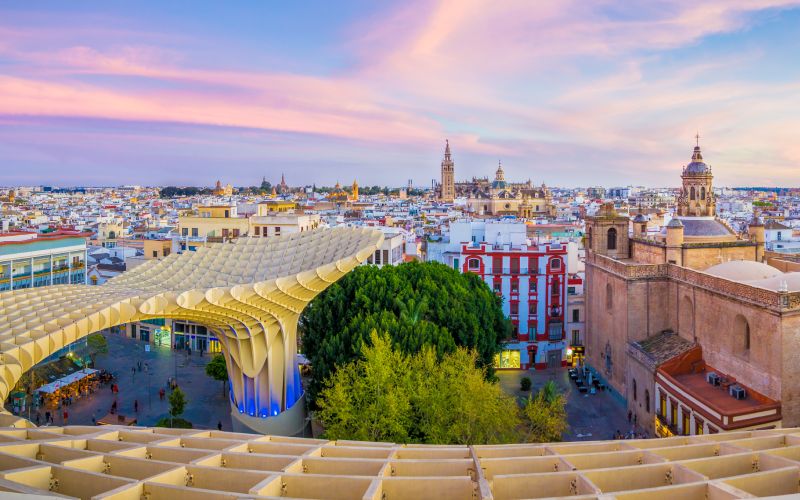 Also known as the Setas de Sevilla, the Metropol Parasol is the largest wooden structure in the world and is located in the heart of the capital of Andalusia. Since its opening in 2011 it has become one of the icons of the capital of Seville. Its undulating forms are reminiscent of mushrooms, hence its name. They rise above the city and give formidable views of the Giralda and other emblematic monuments of the city. You only have to look at the Mirador; situated at 28 metres high and with an extension of 250 metres, to see for yourself.

barcelona, bridges, museums, provincial capital
It may interest you...