The Pyrenees are a land of legends. Thousands of kilometers that boast places marked by stories, often lost in the past. Fortunately, many others are known. They even allow us to make a getaway. This is the case of this place: the Ermita of Santa Elena. A small temple in the vast, beautiful gorge that leads to the Tena Valley from Biescas. A place in Huesca linked to a cave where a whole empress hid, legends tell, to save her life.

A bit of history about the Ermita of Santa Elena

The fact that this temple can be where it is, is thanks to the same place that surrounds the whole area: the Gállego. This river flows down marking the pace of local life. Therefore, thousands of years of water flow opened the current gorge, the Foz de Santa Elena. A steep, narrow and wooded environment that steam natural spectacle in almost all its points. The point that controls the transit between the Tena Valley and Biescas. This made it easy for prehistoric communities to inhabit it. 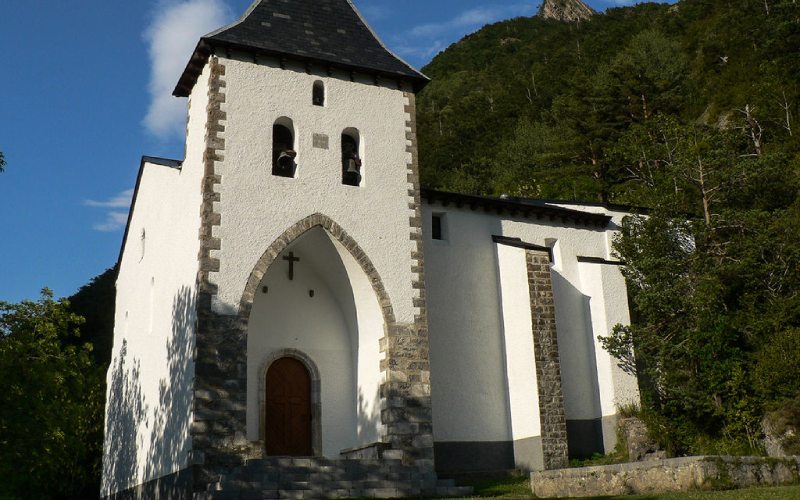 Being the Pyrenean Huesca a land of saints and legends, it is not strange that the Foz de Santa Elena has its own mythical history. It is said that the very empress Elena of Constantinople ended up, who knows why, in this gorge fleeing from evil infidels. For the clueless, the future saint was the mother of Constantine, the Roman emperor who in the third century A.D. legalized Christianity. Returning to Spain, the leader decided to hide in a cave, where a spider spun a web that protected her. Also, a spring with miraculous properties was magically created. 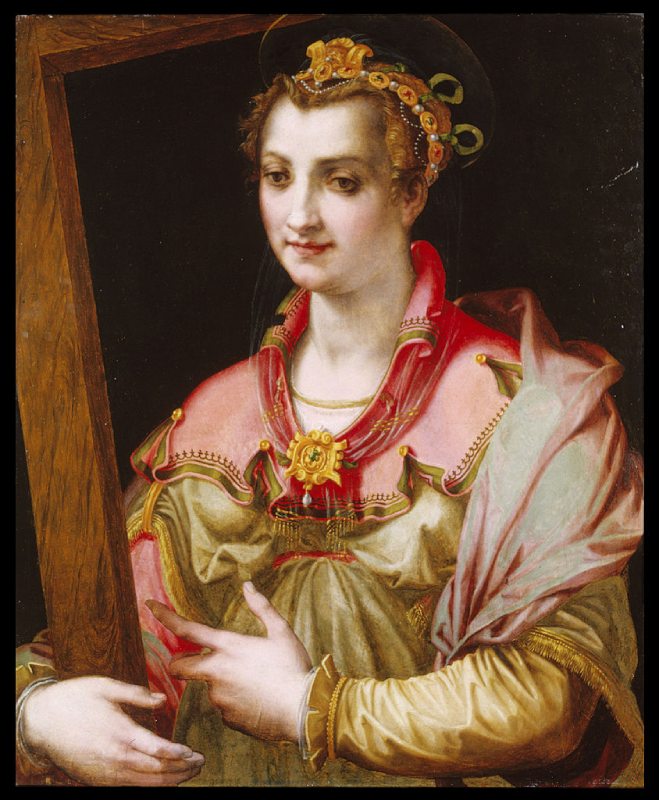 Cave and spring went from being a sacred place to a Christian sanctuary. Because it was already sacred, as evidenced by the nearby dolmens. The church changed over centuries to acquire its current look, always in a unique environment. Of course, the hollow of the empress was always the protagonist. In the 19th and 20th centuries, the defenses of the gorge were reinforced. Hence the remains of the fort and the bunkers that can be seen today, witnesses of the Civil War. 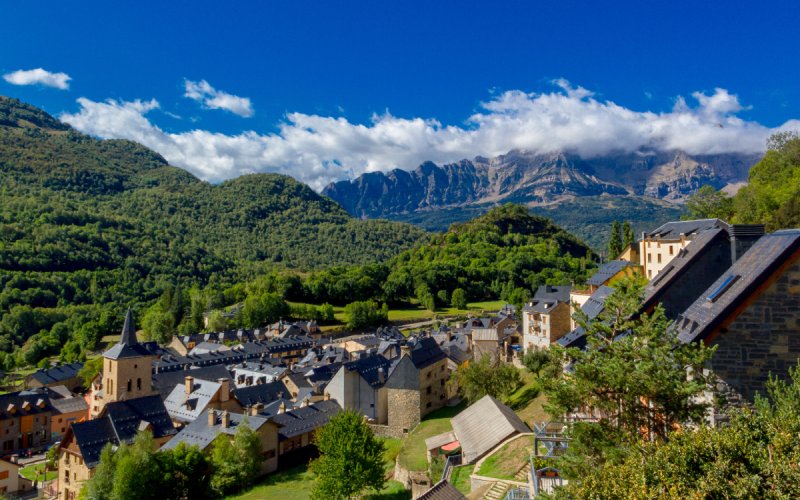 Panticosa, part of the Tena valley accessed through the Santa Elena gorge. | Shutterstock

The keys to the hermitage of Santa Elena

The visit to the Ermita of Santa Elena requires a little effort. That’s why it is in the Aragonese Pyrenees. A parking lot reduces the walk to about 4 kilometers between round trip, while if you leave from Biescas, it will be more than 10. This last option, of course, is a priority if you are minimally in shape. The nature is exceptional. But once both alternatives converge, there is a small zigzagging ascent. 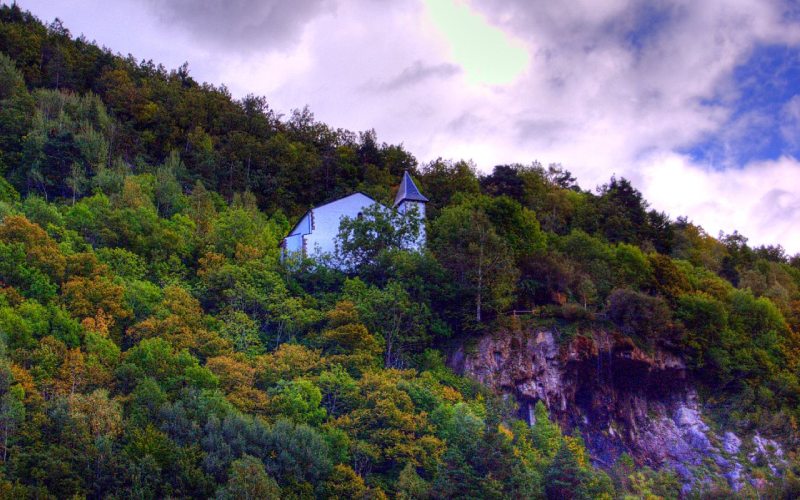 Once at the top, a small meadow of intense green awaits. Then, the temple appears, with the small miraculous stream to its right. Its waters are collected in a small pond whose stones, supposedly, have the marks of where St. Helena leaned. The grace of God wanted the stone to become moldable like mud. The modern and snowy aspect, almost unpolluted, creates a clear contrast with the vegetation. 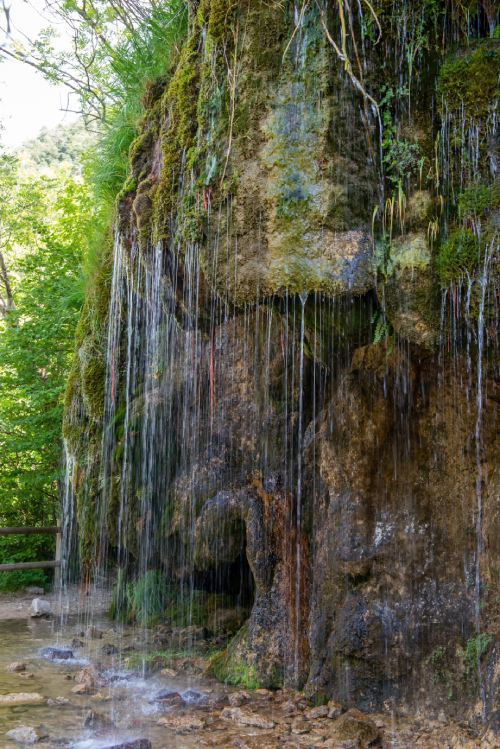 Inside there are remains of the temple, such as the occasional column from the Mozarabic period embedded in the structure. Simplicity and beauty come together, similar to other sanctuaries throughout Spain but with a local personality. A door leads to the cave where Santa Elena was hidden. It is convenient to use the cell phone to light the place. Once outside again, don’t forget to look to the side and look for the stairs leading down. These lead to an unexpected waterfall fed by the irregular sacred spring.

Spots near the hermitage of Santa Elena

Although the passages dug by neighboring rivers, such as the Aragón, are better known borders and links with France, the Alto Gállego was that as well. A racking that led to an early population of the place. A place mentioned and that is next to the parking, at the base. If you want to, there are several megaliths that can be seen further east on the way to the valley of Aguas Tuertas. 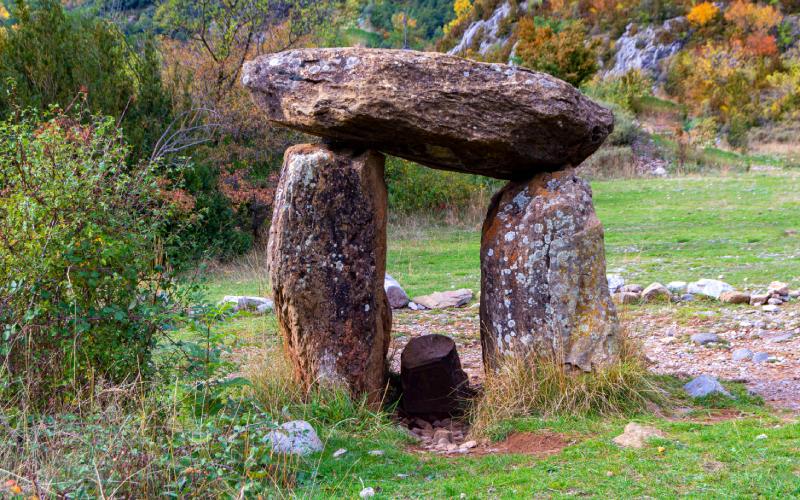 Towards the top is the fort of Santa Elena, as well as several bunkers. The mission of all of them, now ruined, was to defend against a possible invasion from France. A continuum in the valleys of Huesca that is magnified in nearby Jaca. Its pentagonal citadel is possibly the best preserved in Europe. Together with its cathedral, a luxury combo.

To the north of the Ermita of Santa Elena is the Tena Valley. Epicenter of winter sports thanks to Formigal-Panticosa. Some of its villages are reborn, such as Búbal or Lanuza, others alive since the Middle Ages, such as Sallent de Gállego, make up an amazing whole. In terms of nature, in the center are two reservoirs of enormous beauty, but which have taken their toll. The sides, full of lakes and high peaks make up a large number of routes. 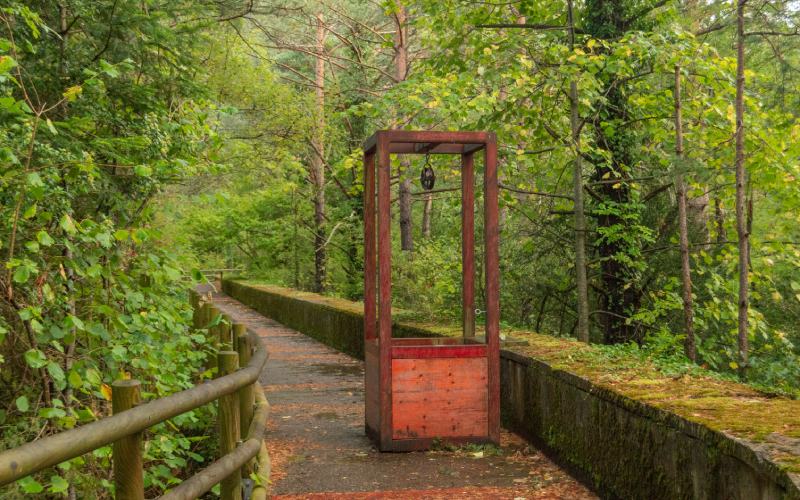 If you look south, Biescas rules. Overrun by tourism, it is perhaps the best place  to explore the Alto Gállego. The valleys unfold on both banks, feeding isolated villages and sometimes stopped in time. Always with slate roofs and a characteristic color, having a car is a must to see them. In them, the churches of Serrablo are located, with a unique style in Spain, it is not known if Mozarabic or pre-Romanesque. This place gives for much without hardly moving away from landmarks such as Broto, Canfranc or Ordesa.

A paradisiacal Ermita with lots of history, that is why it’s our Weekend Getaway

Its cave has the honor of having protected an empress of Rome. A legend in line with the hugebeauty of the scenario created by the foz, the temple, the spring and the waterfall. This is the Ermita, our Weekend Getawaty, one of the most striking in the Huesca Pyrenees, apart from San Urbez. A great aesthetic and folkloric experience that is well worth a getaway.

hermitages, history, Huesca, Pyrenees, weekend getaway
It may interest you...