The city of the three cultures

The ancient capital of the Visigoths would be converted into a place of tolerance. Always associated with the monarchy, it was headquarters to the fundamental translator school of the occidental culture. As long as centuries happened the history of Spain had been recovered, inspiring artists such as El Greco and Ignacio Zuloaga. This travel guide to Toledo is a class full of history.

Before discovering the travel guide to what to see in Toldeo, it is convenient to go over its history. The Celtiberian town of the Carpetany was installed in a hill that dominated the most predictable ford in all of the zone. Sorrounding, the settlement created would become the capital. In the year 192 B.C. the procouncil Marco Fulvio Nobilior defeated this town close to the city, that  was conquered the following year. In the centuries later, it would become an important Roman municipality and a Episcopal headquarter.

A cause of the pressure from the francos, in the second half of the V century the Visigoths occupied the Iberian Peninsula. From the year 507, they translated their capital from Tolosa, south of France to Toledo.Here they established the organs of the Government: the Oficio Palatino and the Aula Regia. During the year 589, in the III Council of Toledo, the reign changed Arian Christianism to Catholicism. Later, in 610, it converted its bishop into archbishop. This meant that he possesed authority over the rest, as to why he denominated as Primate of Spain. In these metropolitan headquarters, they would celebrate 12 councils. Also, a religious tradition was began that continues to this day. The bishop of Toledo gains the title of Prime Cardinal.

Upon the 712 the Arabs took the capital of the Visigodan Kingdom, naming it madinat al-muluk. It would be the head of the so-called Marca Media, a great territorial constintuency in which the Caliphate of Cordoba integrated various cores or provinces. In the year 1023 an independent Taifa Kingdom was founded that would have three dinasty kings, These would fight in continuous wars withother Taifas and with the Christians, which they would end up paying fees in exchange for protection.

Later, in the year 1079, the King of Al Qadir made a decision that would mark the future of Toledo. Upon suffering stong internal fights and the severe harrasment from the Taifa Kingdom Badajoz, he ran away. His strategy consisted in asking for help to the King who he was tributary to, Alfonso VI de León. During 1085, the Christian Monarchy conquered Toledo. Deciding to keep the core in exchange of Valencia. Like in other cities, one of the first jobs was to open the temples, and begin to build a cathedral over the Mosque.

From 1126, the archbishop Raimundo de Sauvetat organized a school in Toledo. In it, studious Castillians and stragers of the Christian, Jewish, and Muslim religion dedicated to translate Castillian, and then latin. Thanks to their labor, important Arab texts of medicine, astronomy, and philosophy passed to form part of the occidental culture. This is why Toledo is known as the “city of the three religions”.

It lost such condition when in June 1211 thousands of French crusader knights arrived. Their leade was the archbishop of Narbona. Outraged by the coexistence of Christians with the infidels, the Gauls assaulted the Jewishry, murdering the occupants. This was motive of a fight with King Alfonso VIII, qho ordered the exit of the army. However, after handing over the forts, the French cruzaders insisted in murdering all Muslims. Finally, the King sent them back to France. This is the reason why only Castillians, Navarros, and Argans confronted each other the following year. This was the Battle of de Tolosa.

In June of the year 1520, the Toledo militia commanded by Juan de Padilla, assaulted the Alcázar and made the Mayor flee. With him, the common revolt that began in Segovia. Defeated by the movement and with Padilla executed, in April of the following year in Villalar, his widow María de Pacheco was leader of the city until February 1522, when she had to flee to Portugal. 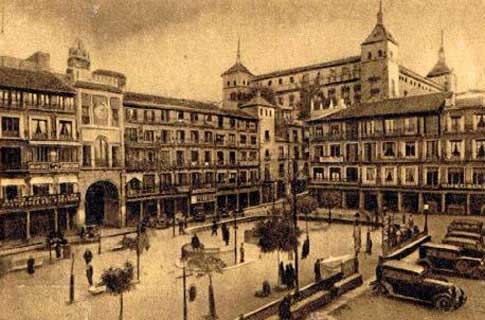 Ancient photograph of the Zocodover Plaza

In Spring 1577, the painter Domenikos Theotokopoulos arrived to Toledo. There he would love and ork during 37 years, until his death. Due to the difficulty of his name, he was nicknamed El Greco. The genious left a large part of his work in the province and converted into one of the most influential artists of the Spain galleries.

Centuries later, on July 22 1936, the population was a key place in the Spanish Civil War. After trying to control the city with no success, General José Moscardó locked himself in the Toledo Alcázar. Along several hundred civil guards, countrymen, and some cadets who resisted a siege until September 28th. Due to this, Francoism became a myth.

Up next, discover the travel guide of what to see in Toledo.

What to see in Toledo

The old town of Toledo, declared a World Heritage Site by UNESCO in 1986, is located on a crag. At the top of it you can see up to twelve small hills. This nucleus is surrounded to the east, south and west by the deep riverbed of the Tajo.

The visit of what to see in Toledo city begins with the monumental Puerta de Bisagra. This is the main entrance to the city, built by Covarrubias on the Arab walls. It can be identified by its imposing imperial coat of arms. An alternative access can be found in the roundabout of the Reconquest. There is a large car park from where you can take the escalator to La Granja. A simple way to overcome the slope of the hill. 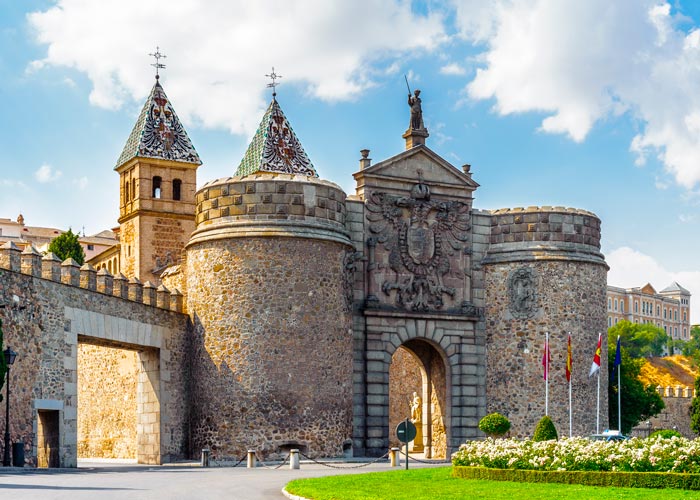 The Mudejar-style Puerta del Sol takes its name from one of the drawings on its arches. The small and exquisite Cristo de la Luz Mosque also stands out. Together with the Mosque of Cordoba, it is one of the oldest in Spain and is one of the best things to see in Toledo. It dates back to 999 and, despite being reformed by the Christians, it maintains the Muslim style, its apse shining above the rest.

Towards the southwest you can reach the Church of San Ildefonso or of the Jesuits, whose main attraction is to climb the bell tower. From there you can access the roof and magnificent aerial views of the city from its very heart. Next to this baroque church is the Visigothic Museum, located in the old Church of San Román. It is one of the oldest buildings to be seen in the city of Toledo. Also of Visigothic origin, it suffered many later Muslim and Christian interventions. These include one of Covarrubias in the apse, from the 16th century. Its interior houses numerous objects, archaeological remains and Visigothic codices, including a reproduction of the Guarrazar treasure, found in Guadamur.

Continuing towards the west, we cross the Jewish quarter. The destination is the Monastery of San Juan de los Reyes. Commissioned to be built in commemoration of the Battle of Toro, it is one of the peaks of the Flamboyant Gothic or Elizabethan style. It was commissioned to the architect Juan Guas, being the largest building built by the Catholic Kings. In its rich decoration you can appreciate the influence of the Arab architecture. Meanwhile, on the cover, made by Juan Bautista Monegros on a Plateresque project by Covarrubias, you can see the chains of the Christian prisoners freed after the conquest of Granada. 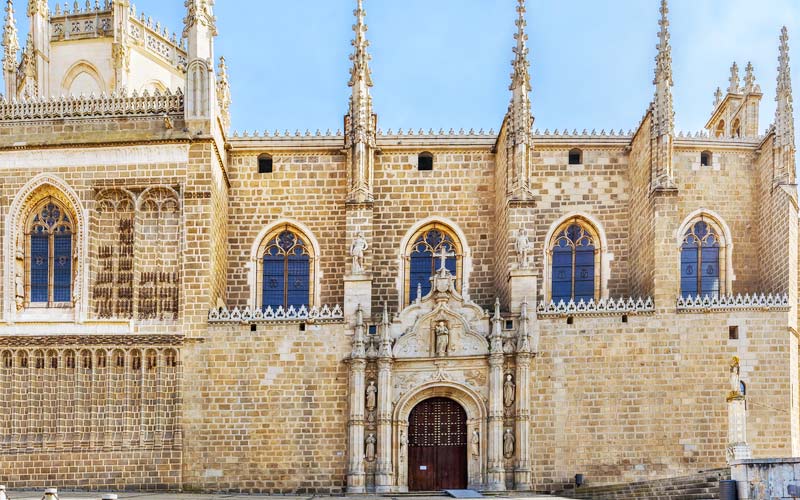 Very close by, at the western end of the city, is the San Martín Bridge. It is one of the two historical bridges that gave access to the city. The other is the Puente de Alcántara, which is located at the other end of the city. In the same Jewish quarter there is another temple to be seen in Toledo: the Synagogue of Santa María la Blanca (12th century). After many historical vicissitudes it shows its beautiful horseshoe arches and plasterwork. Not far from it is the Synagogue of El Tránsito, built around 1357 by Samuel Leví, the protagonist of a gruesome story. Inside, the impressive decoration and the Sephardic Museum are worth mentioning.

Continuing along the Calle de los Reyes Católicos you will reach the Casa Museo de Victorio Macho. It is the headquarters of the Royal Foundation of Toledo and houses the works of this contemporary sculptor. Almost next door is the House Museum of El Greco. Although he never lived there, it houses great works by the artist such as San Bernardino and Vista de Toledo. To complete the visit you can enter the neighbouring Church of Santo Tomé. This gives the opportunity to contemplate the extraordinary painting The Burial of the Count of Orgaz, about the miracle that occurred at the burial of the nobleman who paid for the construction of the church.

The next landmark to be seen in Toledo city is the Plaza del Ayuntamiento. In addition to, surprise, the City Hall designed by Juan de Herrera, there is the Archbishop’s Palace and the Primate Cathedral. This extraordinary temple, a great monument to see in Toledo, has its own website. From here you can access the Calle del Comercio, where numerous establishments offer typical products such as Toledo’s swords. Following this road you will reach Plaza de Zocodover. Its curious name comes from the cattle market that was held there, as in Arabic it means “Souk of the Beasts”.

Next, it is time to enjoy the Santa Cruz Hospital, a building made mostly by Alonso de Covarrubias in the 16th century. This Renaissance construction has two cloisters and a Plateresque façade. It currently houses the Santa Cruz Museum. This space includes sections of Archaeology, Fine Arts and Decorative Arts, and several paintings by El Greco can be seen here.

Returning to the Plaza de Zocodover, and going up the slope of Carlos V, the magnificent Alcazar of Toledo appears. The colossal building is something to see in Toledo always, with due care. However, this can take about three hours. The fortification was built over previous ones to be the residence of Charles V. However, works were so slow that it never fulfilled such a function. Alonso de Covarrubias and Juan de Herrera participated in the project. After successive fires and its siege during the Civil War it had to be practically rebuilt. Today it houses the Army Museum, which reviews the military history of Spain. On the top floor is the Castilla-La Mancha Library, the second most important in the country, from whose cafeteria you can enjoy beautiful views of the city.

In this review of what to see in Toledo, the perimeter of the historic centre cannot be forgotten. This makes it possible to admire the remains of the medieval walls and gates such as the Puerta del Cambrón. The viewpoints of Los Cigarrales or the Parador de Turismo are, without doubt, ideal places from which to contemplate sunsets.

Outside the walled perimeter and opposite the Puerta de la Bisagra, right next to the road to Madrid, is the impressive Hospital de Tavera. It is the first large classical-style building, dating from the mid-sixteenth century, in Spain. Its beautiful rooms, the historical archive and the art collection of the Medinaceli Foundation make it one of the best places to see in the city of Toledo.