A convent inside a castle

The peaceful abulense capital was declared a UNESCO World Heritage Site. The city is a small jewel of medieval and renaissance art that is very well preserved. In fact, it counts with one of the best kept gated enclosures in Spain. The memory os Santa Teresa and the religious arquitecture invite mysticism and reflection. Discover the history and the travel guide of what to see in Ávila capital.

Plan your escape to Ávila

The visit to this Castillian location is centered in walks through its walls, walking around looking at the facades of the palaces and the convents. In this travel guide to Ávila intramurals, make the cathedral and museum stand out, just like the Convent and Museum of Santa Teresa or the Church of Santiago. From the outside of the walls you can see the Roman Basilica of San Vicente shine along with the Royal Monestary of Santo Tomas and it´s museum. The spiritual character that pervades the abulanse capital, requires a two day stay to explore the full travel guide.

It is also possible to complete various activities of sporting activities in the province of Ávila. As well as you must make gastronomical shopping trips, and make purchases such as the Santa Teresa candies and the beans from the Ávila boat. There is a wide offer of places with a good price-quality relationship, as well as romantic and tranquil places where to stay. To make the best choices regarding these subjects, you can look at our pages of  where to eat and where to sleep in Ávila.

Let´s continue on this travel guide to Ávila.

In order to understand and see all of the travel guide to Ávila, it is convenient to go over the cities history. Once associated with the ancient legendary foundation by Hercules son, the ancient Obila had the Vetons as the first royal settlers. From that era numerous verracos are conserved, zoomorphics made of rock. Under the Roman domination the first structure was consolidated in the first urban structure and the first walled compound.

During the Visigoth era, Ávila was converted into an episcopal headquarters. Later, the city was taken by the Muslims and converted into a strong requested plaza, which changed owners commonly. From 1805, the repopulation was promoted by Raimundo de Borgoña, the son-in-law to the King Alfonso VI de Castilla, which began the urbanization in neighborhoods. The habitants separated into two groups. In one part were the serranos, members of the gentry, the knight militia, and the clerical class, which occupied the fortified part. On another were the rinous, agricultures, artisans, and merchants, which were on the outside of the wall.

The Abulense coat of arms proclaims that Ávila is of the King, tiltle granted by Alfonso VII, Ávila of the Loyals, granted by Alfonso VIII, and Ávila of the Knights, according to Alfonso XI. This last one was granted with the importance that these had in the span of history, especially during the XV an XVI century. During 1645 the famous success of Farsa de Ávila took place here. In it, the king Enrique IV was deposed in a ceremony in which Prince Alfonso was crowned.

Reaching the XVI century, diverse members of their lineage had an important military paper in the emperial companies in Flanders and America. Ávila was an active part of the beginning of the communist uprising against Carlos V and even against the authoritarianism of Phillip II. However, the city also has a dark past. In it light up the first bonfires of the Spanish Inquisition, animated by fray Tomás de Torquemada. Which is just as important as its mystical past. It was the home of the key figures in the Christian spirituality such as Santa Teresa de Jesús and San Juan de la Cruz.

After the expulsion of the moorish, Ávila would fall in a gradual decline. The city would not begin to resurface until the end of the XVIII century. In January 1809 it was looted heavily by Napoleons French. Once in the second half of the XIX century, a slow demographic recovery was motivated by the construction of the railroad. This technology converted the city in a line stop that unites Madrid with the French frotier through Irún.

In the las decades, the Abulense capital has been consolidated as a tourist destination. This is due to the extraordinary monumental heritage. Religious and univerity tourism are also of great importance. However, the most popular are the medieval walls sorrounding Ávila.

Up next, lets continue on this travel guide of what to see in Ávila.

What to see in Ávila

This travel guide to Ávila involves sightseeing the numerous main sights the city offers. Also, we can enjoy one of the best gastronomies in Castille and León. A visit to this marvelous city can be completed in a couple of days. Enough time to go through all the cultural heritage Ávila offers us. Ávila looks like a convent within a castle: numerous churches (very often linked to the figure of Teresa of Ávila) enclosed by the walls of a city that seems to breathe peace and quiet. We propose you two different ways to get to know the city taking Santa Teresa’s plaza as the point of departure: one path goes through the indoor city and the other one deals with the outdoors.

Before starting our outing, we cannot emphasize enough how important the Cuatro Postes (Four Posts) are: you will have one of the most beautiful views of the city and the walls from this site. Next on the travel guide, the wall.

The wall, 2.5 km length, was built between the 11th and 14th centuries in a Romanesque style. From Santa Teresa’s plaza, you can enter the old city by different gates. The Alcázar Gate, Leales Gate or Saint Vicente Gate. These gates lead to the Cathedral plaza, where one can visit the Cathedral. It is stated to be built in 1172 but finished in the 14th century. This temple inspired Paris’ Saint-Denis.

From this cathedral we highlight: the Apostles Door outside (13th century). Another is the main altarpiece (by Pedro Berruguete, Santa Cruz and Juan de Borgoña). The choir stalls and the Renaissance Sepulcher (decorated by Vasco de la Zarza in 1518) inside. The Cathedral Museum is a must-see, with El Greco’s painting. In the surroundings of the cathedral there are many mansions and palaces. These include Polentinos Palace, Dávila Museum (13th– 15th centuries), and Bracamonte Palace (16th century). Others are the Mújica Palace (which houses the headquarters of the Provincial Council) and the Guzmanes Towers (14th century).

Next to these towers, you will find Santa Teresa’s Convent, open in 1636 on the very house of the saint. Another complementary visit for those seeking after the footsteps of the saint, we recommend Nuestra Señora de Gracia Convent. Here is where the saint first experienced her monastic life; the Encarnación Convent. She lived for more than 27 years. Also, the Teresiano Museum, full of memories of the saint. The last landmark inside the city is the Mercado Chico (Little Market), the heart of the city in terms of tapas, markets and atmosphere. There you can find the City Hall (19th century) and San Juan Church (15th and 16th centuries). Where Saint Teresa and the musician Tomás Luis of Victoria got baptized.These are worthy visits in this travel guide. 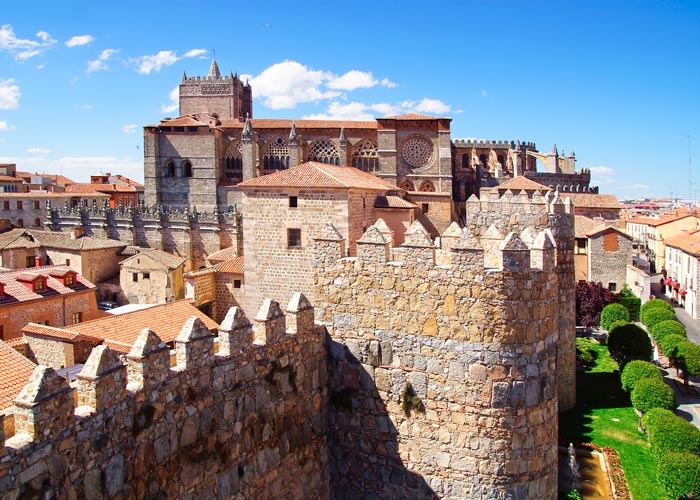 Our second route, outdoors the city, starts in Santa Teresa’s plaza as well. Here you can find Saint Pedro church (12th– 13th centuries) and Santo Tomé the Old (12th century). It houses an annex of the Ávila Museum, which is situated in the Renaissance Deanes Palace form the 16th century. Next to the museum one can enjoy the Saint Vicente Romanesque Basilica. Which was built at the end of the 11thcentury where Vicente, Sabina and Cristeta were martyred. In the outside part of the temple we must highlight the door called Glory of Ávila Door. Inside, you should pay attention to the sepulchers of the martyrs. Behind the basilica, Saint Andrés Church still preserves the most interesting capitals of the city. A bit further away, Santo Tomás Royal Monastery (1482-1493) is placed. This building used to be the summer residence of the Catholic Kings. It is also the headquarters of Torquemada’s Inquisition and a university center. The famous writer Gaspar Melchor of Jovellanos from the Enlightenment studied here. The Oriental Art Museum is located here as well.

With this, we conclude this travel guide to Ávila.

Ávila, Castile and León, cathedrals, churches, convents, medieval towns
It may interest you...