Castles such as Burgalimar, Gormaz and Vélez-Blanco correspond to what most people imagine in the Middle Ages. A hard, regal image, almost abrupt at times. Not in vain, they were the centre of power of feudalism. Defensive environments dedicated to making clear who was in charge of whom. Yet sometimes the strangest examples emerged. The Castell de Bellver is one of the most outstanding in Spain. It is a 14th century fortress with a unique appearance. It has a circular floor plan, with great symmetry and an almost shining white, and is set over Palma de Mallorca. 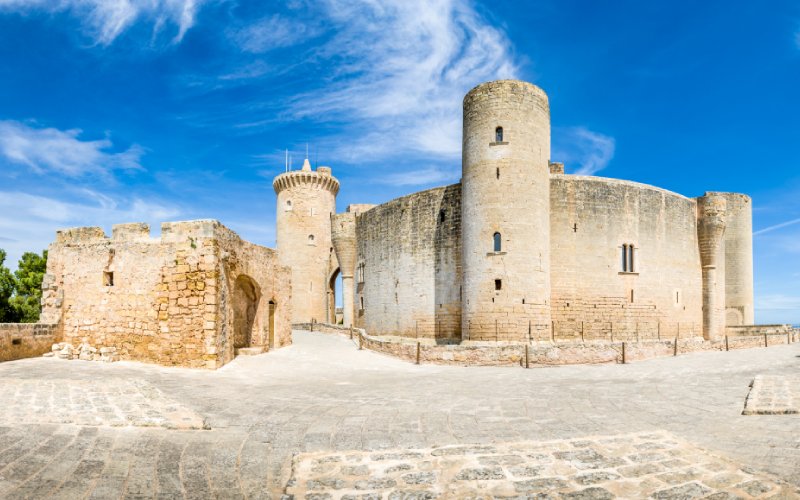 A castle of possible Roman inspiration

The tradition of circular medieval fortresses was not very widespread in 14th century Spain. That is why the choice of Bellver, which means “good view” in the Balearic Islands, was a matter that attracted attention. Its architect was one of the most famous to have worked on the islands, Pere Salvá. His talent was also demonstrated in another landmark of Palma, the Almudaina Palace.

The layout and arrangement of its towers has led one to think that he was inspired by a very old complex. This would be the famous Herodion, a palace-fortress built shortly before the change of era by Herod the Great. This Hebrew tyrant, famous for the biblical passage of the Slaughter of the Innocents, left an unfortunate legacy. It was in Bethlehem that he built it, on a hill. It lasted only a short time, until 71 B.C. Then the Romans destroyed it in the context of the revolts led by Jews in the area. 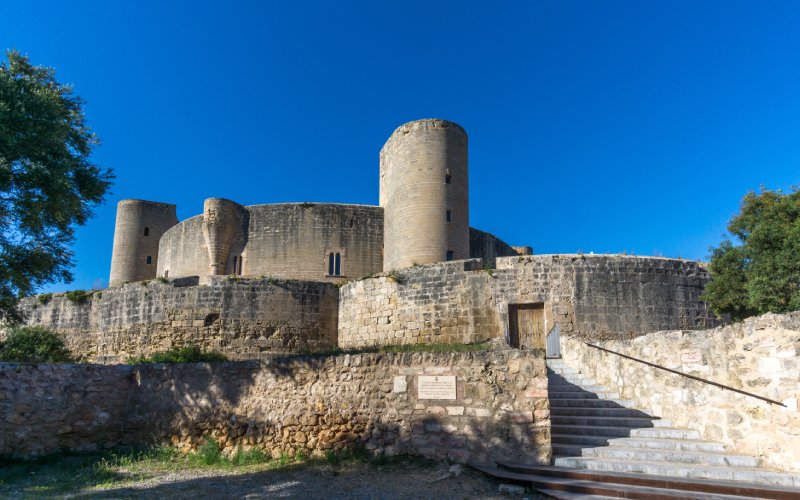 View of Bellver Castle from the outside. | Shutterstock

As it has a circular floor plan with an outstanding tower, arranged symmetrically on the cardinal points, it is believed that Pere Salvá took note of it to elevate his Gothic work. Likewise, both are located on the top of a mountain, something that on the other hand responds to an elemental strategic factor. Be that as it may, the similarities do not seem at all to be coincidences. Fortunately, Bellver Castle managed to overcome the obstacles of time and war with much more ease than its predecessor on the other side of the Mediterranean. 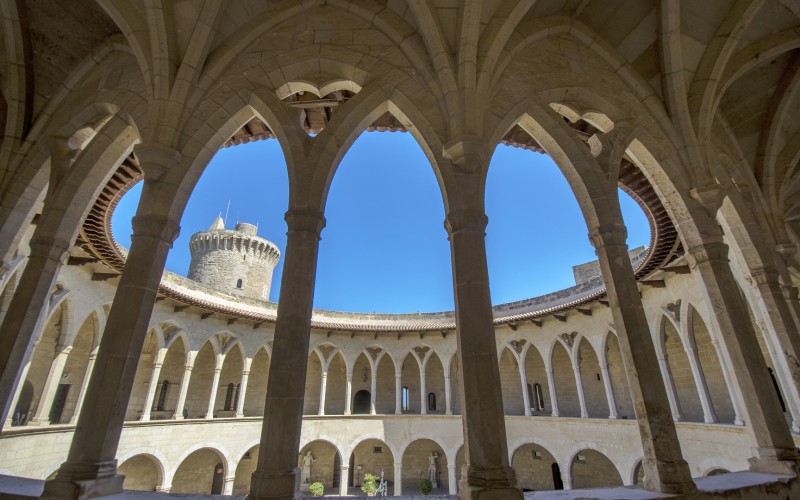 The upper gallery from the inside. | Shutterstock

The palace fortress of Jaume II

Regardless of where it was inspired, what is certain is that it was at the beginning of the 14th century that Bellver Castle was built. The initiative came from the island monarch and lord of Roussillon, Cerdanya and Montpellier. His reign focused on consolidating his territories in an attempt to ensure their survival. He acceded to them by being the offspring of Jaume I the Conqueror of Aragon, although his brother Peter kept the majority of the prize. To give his lineage a place from which to manage their affairs, he decided to build the palace fortress.

The main material used was Marés stone, a Balearic sandstone commonly used in the islands. Extracted from nearby quarries, it is the one that provides the coloring to the whole. It has some early defensive areas in the form of walls. These essentially follow the layout of Bellver Castle, including the towers. A wide passage area, adapted to modern warfare, gives way to an inner moat that isolates the main building. 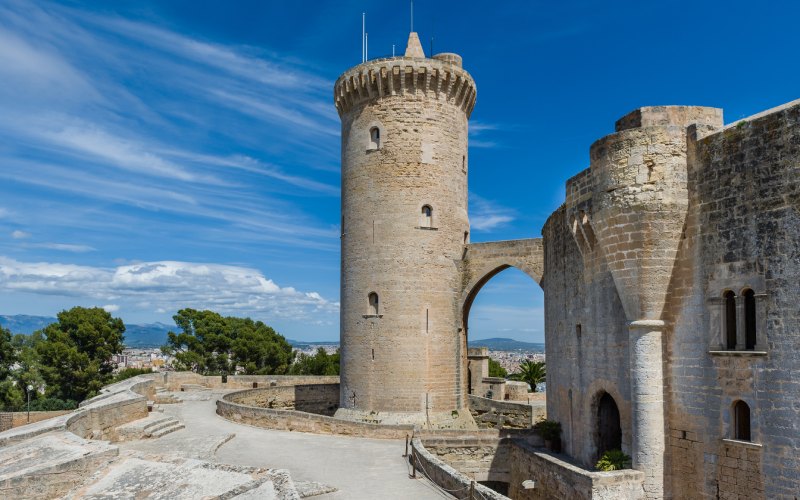 The homage tower at Bellver Castle is exempt. | Shutterstock

The towers correspond to the cardinal points as in the Herodion. Three minor ones are deployed in the east, west and south. The northern one, on the other hand, appears exempt. This is the homage tower or Major. It is connected to the central body through a stone passage and was the most prestigious point of the site. Without reaching the size of its namesake in Belalcázar, it is powerful.  However, it does not make the whole thing lose an ounce of elegance.

Meanwhile, the main building stands out especially for its patio. Like the floor plan, it is circular and around it a double porticoed gallery distributed over two floors. A space that makes the castle even more peculiar. Here the palatial character of the castle is made clear. It is in a good state of conservation, unlike many other monuments in the country, thanks to the fact that it has suffered few assaults. The main one was during the Germanic conflicts. Since the entry of artillery as a common warfare element, the whole complex has been adapted, although without excessively affecting its original appearance. 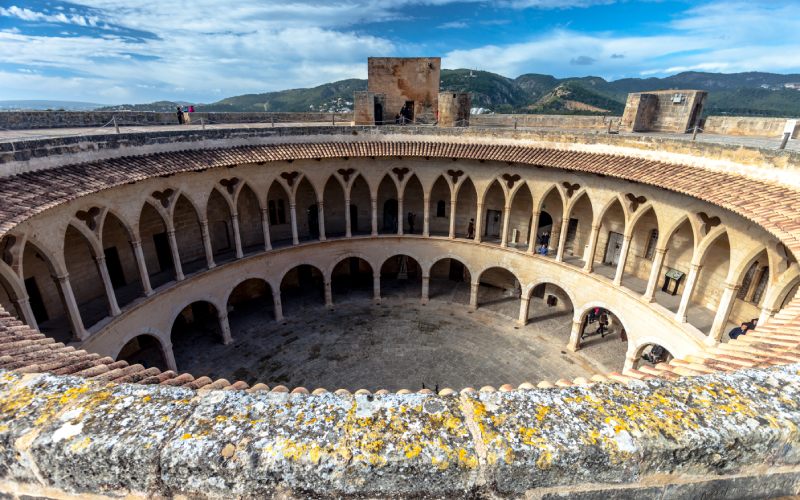 Bellver Castle courtyard from above. | Shutterstock

The transition to the present of Bellver Castle

Although it served as a stately residence for a time, the evolution of the kingdom of Mallorca marked its future. It did not lose its warlike character, but the move of power to the mainland meant that it was used more like a prison. Characters of the high class and historical importance passed through it, without going any further than direct descendants of Jaume II. One of his most famous prisoners was Gaspar Melchor de Jovellanos. His character made him interested both in the castle and its surroundings.

A forest surrounds it, composed essentially of pines. In this way, he helped to raise the awareness of the authorities to intervene in its conservation. Sadder was his role as a Francoist prisoner, like San Simón in Galicia. 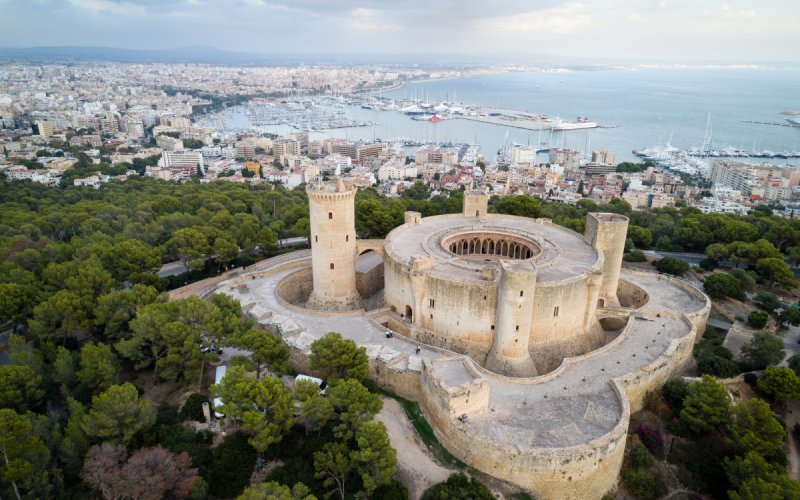 Once this last prison phase was over, it was once again conceived as a museum space. This had been its destiny after being ceded to the local council during the Second Republic. Something that took time but ended up arriving in the last third of the 20th century. Reformed, it allows us to review the different periods of the city from the Talayotic era to the most recent ones. Well-conditioned and connected, it has a cafeteria as well as other services. Next to the pine forest where it is located, it offers a very pleasant morning or afternoon visit.

It is worth noting the views that can be enjoyed from the heights of the castle. From here you can see a good part of Palma, including its port and cathedral. Also, if you like to walk, the forest in which the palace fortress is located offers entertaining routes. Being in the same island capital, it is easy to make short trips or combine them with a visit to Bellver. Inca is a great inland alternative, while Andratx in the west is a great place to visit. Likewise, Torrent de Pareis, Gorg Blau and Lluc make up a spectacular triangle in the heart of the Serra de Tramuntana.