Spiritual target and capital of the Baroque

Santiago de Compostela is the capital city of Galicia. It was declared a World Heritage Site by UNESCO, and it is the most famous pilgrimage path in the world.

The visit to Santiago de Compostela should be preceded by the reading of this page, as well as the one specifically dedicated to the cathedral. It also helps to know its fascinating stories: the shell of St. James, the bishop Sisnando Menéndez and the tribute of the one hundred maidens. It is not easy to understand the significance of the most travelled pilgrimage route.

The burial of the St. James Apostle must have taken place between 820 and 835. This led to the construction of a church to which the monarchs of Leon granted him all sorts of privileges, favoring his influence throughout the kingdom through the patronage of “Santiago Matamoros” (for appearing at the right time in battles of the monarchs).

The most visited sacred place in Christendom

In the Middle Ages, when the pilgrimage to Jerusalem was very difficult, it was the most visited sacred place in Christendom, after Rome. In order to attract population, in 915 King Ordoño II decreed that any servant who remained in Santiago for more than forty days without being claimed by his master, became a free resident of the population. His wealth led the Moorish leader Almanzor to plunder it in 997, carefully respecting the tomb and the relics of the apostle.

In 1309 King Ferdinand IV of Leon handed over the lordship of the town to the Archbishop of Santiago, a gesture that did not please the bourgeoisie. Nine years later, when the French clergyman Berenguel de Landoira tried to take possession of the mitre of Compostela, he found that the city closed its doors to him. For two years, Berenguel lived in Noia, Padrón and the castle of Rocha Forte, until he managed to subdue the Compostela people on the ” Día de la ira” (16th September 1320). 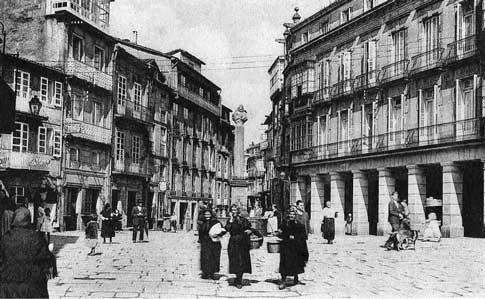 From the end of the 18th century Santiago had a learned and liberal atmosphere. An Economic Society of Friends of the Country was founded, and during the War of Independence a “literary battalion” of patriotic students who fought was formed. But the confrontation between the Liberal Government of Madrid and the Church caused the archbishopric to become an important support for the Carlists. Already in the 20th century it was a place of development of “Galicianism”. It was also there that the first statute of autonomy of Galicia was drawn up.

What to see in Santiago de Compostela

One of the most popular cathedrals in the world

The Obradoiro Plaza is the heart of Santiago and the target of pilgrims; the Cathedral and its façade from the 18th century are placed at the east end of the plaza. To the west of the plaza we find Rajoy’s Palace, employed in the past as a seminar for confessions (it is the headquarters of the City Hall nowadays), which was built in the 18th century in a neoclassic style. To the south we find San Jerónimo’s School, housing the Rectorate of the University of Santiago de Compostela (USC). To the north of the plaza, the Catholic Kings Guesthouse, now the so-called Parador de Turismo. It was originally a hospital for pilgrims ordered to be built by the Catholic Kings during their visit to the city in 1486. Some other important plazas are the one in Quintana (where we can find the Parra House, the Canónica House and San Pio de Antealtares Monastery, which holds the Sacred Art Museum) and the one in Platerías (delimited by the southern façade). The eastern façade of the cathedral leads to this plaza, where we find the “Holy Gate” (always closed except in the Jubilee Years). The Clock Tower, 70-meter height, looks down to Quintana and Platerías. 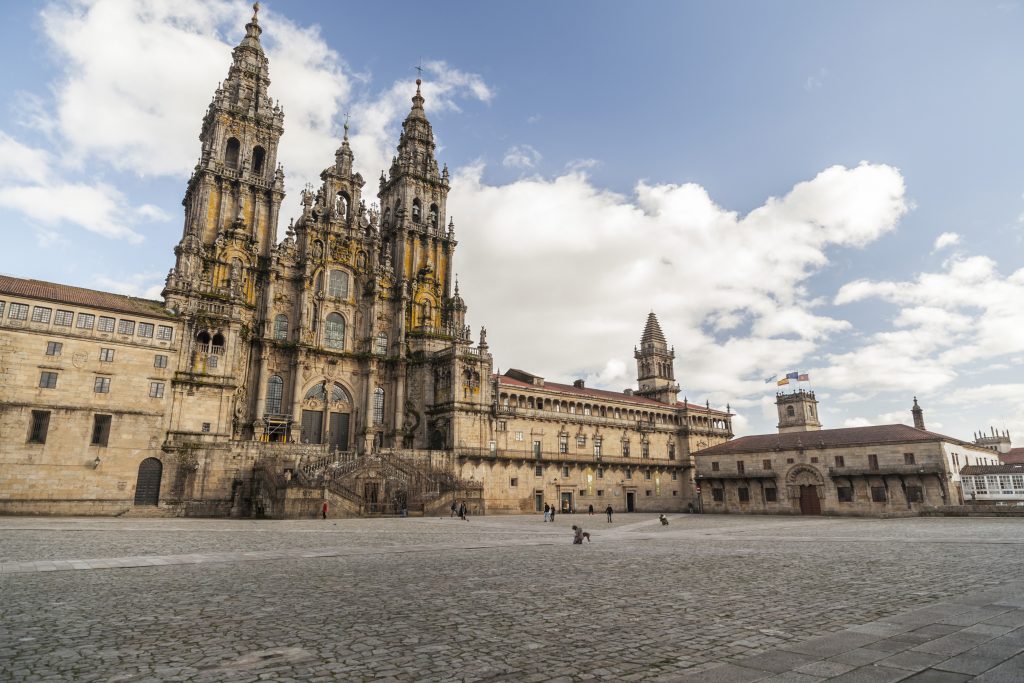 The House of the Cabildo (Baroque in style, 18th century) stands out by its façade, since it makes the Platerías Plaza even more beautiful. This house inspired Ramón María del Valle-Inclán to write the story My sister Antonia. To the northern side of the cathedral we find the Azabachería Plaza (named after the azabacheros, typical artisans from Compostela), where you can see the northern façade of the cathedral (from the 18th century, since the previous one was destroyed by a fire). Facing this gate of the cathedral we find San Martín Pinario Monastery (11th century), the second most important Benedictine Monastery after the one in El Escorial. The current façade was built in 1652. The temple, the most important church after the cathedral, houses one of the best retablos from the Baroque period in Galicia, a work by Fernando de Casas. It has a museum which includes a visit to the church. 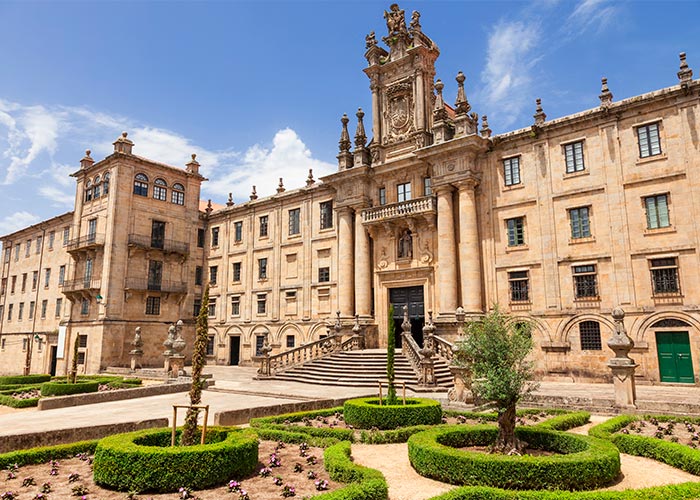 The old city continues by the surroundings of the cathedral. There are many convents, churches and buildings that tourists can enjoy: the Ánimas chapel (17th century), Santa Clara (set up by Queen Violante, wife of King Alfonso X the Wise), San Francisco Convent, the building of the Faculty of Medicine, the Faculty of Geography and History, the Museum of the Galician People, the Contemporary Art Center of Galicia (CAGC), the Auditorium, the Deán House, Abastos Plaza and the City of Culture.

The Cathedral can be seen from every point of the city. In fact, it is prohibited to build anything that obstructs the visibility of the temple. The visit to the outer part of the Cathedral starts in the most famous entry: the Obradoiro façade (Romanesque and Baroque in style). It was a work, finished in 1750, meant to protect the Glory Gate (which was the Romanesque old façade); and it is now a symbol of the Baroque Spanish architecture. The Glory Gate was built between 1168-1188, representing the message found in the Apocalypse and other texts from the Old Testament. This masterpiece has three archs; the central one represents the figure of Saint James. Some other important façades are Platerías (in the southern part, built between 1103 and 1117, Romanesque in style, whose left tympanum is devoted to the figure of the adulterous woman and whose right tympanum is devoted to the Passion), Quintana (built in 1700, it has a Royal Gate, used by the kings to have access to the cathedral, and the Forgiveness Gate, open only during the Jubilee Years), and Azabachería (built in 1122, Romanesque in style, destroyed by fire but whose remains were placed in the Platerías façade). 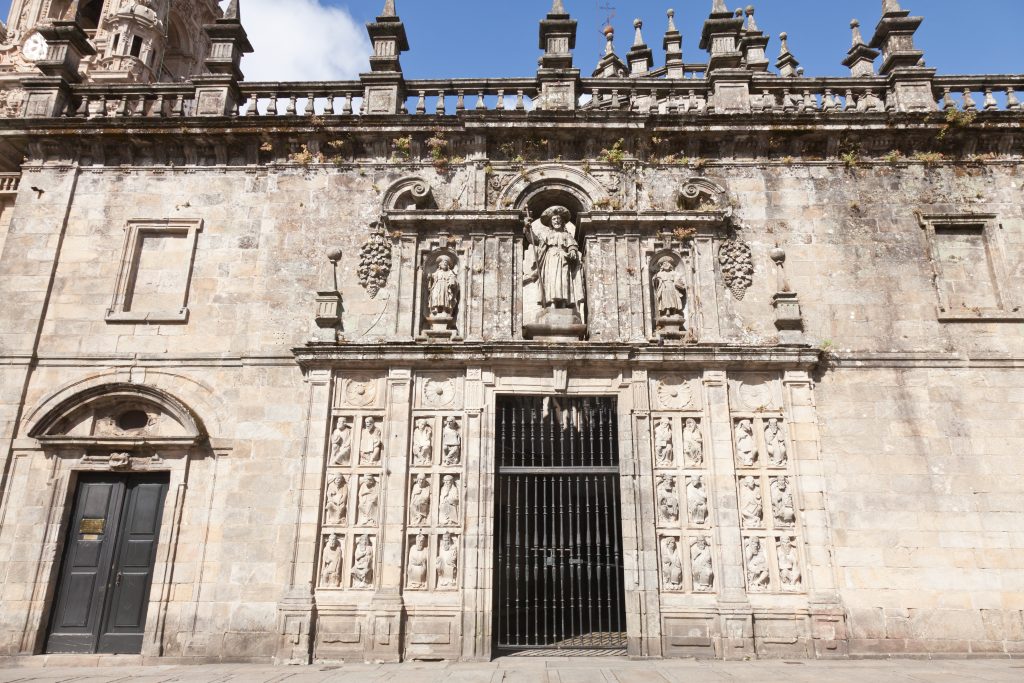 A must-see for visitors is the important Cathedral Museum. It has five rooms with several access points. Behind the Obradoiro Façade, you can have acces to the (1) Romanesque Crypt whose columns support the Glory Gate, symbolizing the Earth coming to the feet of Christ. (2) The Renaissance Gothic Cloister can be accessed via the Obradoiro Plaza, exhibiting pieces digged in the place: both Romans, such as the ones from the pre-Romanesque and Romanesque pieces. The most important piece is the extraordinary Stone Choir placed in the central nave between the 13th and 16th centuries. Now you must go through Plateresque Cloister from the 16th century. Now you can visit the Library where the Botafumeiro is held. It is an enormous censer from the middle ages used as a purification tool to purify the crowds of pilgrims coming. In the last floor you will find a collection of tapestry and a great balcony to have excellent views of the city. (3) The Relics Chapel is accessed via the Renaissance gate inside the cathedral; it holds the gifts given by the pilgrims throughout centuries. (4) The Royal Mausoleum exhibits the sepulchers of the kings of León and Galicia from the 12th and 13th centuries. (5) Finally, the Cathedral Treasure can be found in San Fernando Chapel.

One of the main things to do in this cathedral is to see the Botafumeiro being performed. It is organized by the archbishopric for certain liturgical feasts, but any pilgrim can make a donation in order to see work. When the Hymn of the apostle sounds in the Baroque organs, eight men -the so-called tiraboleiros- make it work. It is an impressive event you cannot miss!

A Coruña, churches, Galicia
It may interest you...