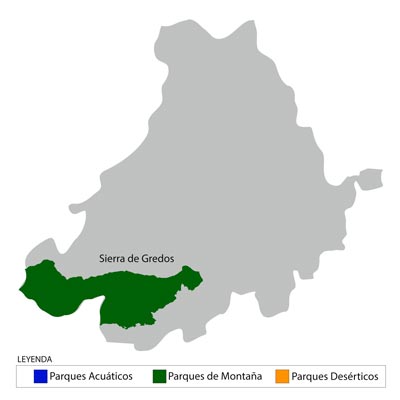 Sierra de Gredos Regional Park is located in the south of the province of Ávila.

Sierra de Gredos is an impressive granite massif that rises in the middle of the Central System mountain range. In 1996 the Spanish Government decided to protect a total of 86,397 hectares of its area.

All over this “roof of Castile and stony heart of Spain” —as Miguel de Unamuno said— there are many natural features of its high mountain ground.

The 2,592 metres of the Almanzor Peak is the highest point in the community of Castile and Leon. Below it, there are heights like the 2,568 metres of the Galana Peak or the 2,391 of El Morezón.

Another of the great charms of Sierra de Gredos Park are its lakes. The most popular ones are those called ‘del Barco’, ‘la Galana’ and ‘los Caballeros’. The most liked is, especially, ‘Laguna Grande’. It is located in the middle of Circo de Gredos (Gredos glacial cirque) and at the foot of the Almanzor Peak. This is the main tourist attraction of the park.

The extensive woodland of Sierra de Gredos Park extends up to 1,500 metres in height as pine, oak and gall oak forests. Higher up, these species are gradually replaced by bush vegetation typical of the high mountains.

Among its fauna, the Iberian ibex stands out, perhaps the most representative animal species of the mountain range (and one of the most valued hunting trophies in Europe).

The most common accesses to Sierra de Gredos Park are from the N-110 road, which links the cities of Ávila and Plasencia, or from the N – 502, between Ávila and Talavera de la Reina.

The AV – 931 road, from Hoyos del Espino, leads to the Plataforma de Gredos, an extensive car park at an altitude of 1,750 metres, which is also one of the main entrances to the park.

Nearby are towns of historical and landscape interest that are worth visiting. This is the case of Barco de Ávila,  Arenas de San Pedro, Candeleda, Mombeltrán and Piedrahita.