Andalusia is a land of poetry. Of fire, of passion. Of treasures that open up to those who want to find them. And one of those treasures is Castril de las Peñas. A typical Andalusian village located in the beautiful province of Granada. Located in a mountain landscape that looks like something out of a fairy tale, this oasis of peace is the perfect choice for a summer vacation in the middle of nature.

Visiting Castril de las Peñas is similar as feeling peace, gastronomy and the Andalusian culture. But it also means adventure, routes with breathtaking views and many sports activities. The green immensity of the Natural Park of the Sierra de Castril welcomes the visitor among peaks, leafy trees and mysterious caves. The Castril River flows between the nooks and crannies of the rocky walls and green pastures.

A brief walk through history 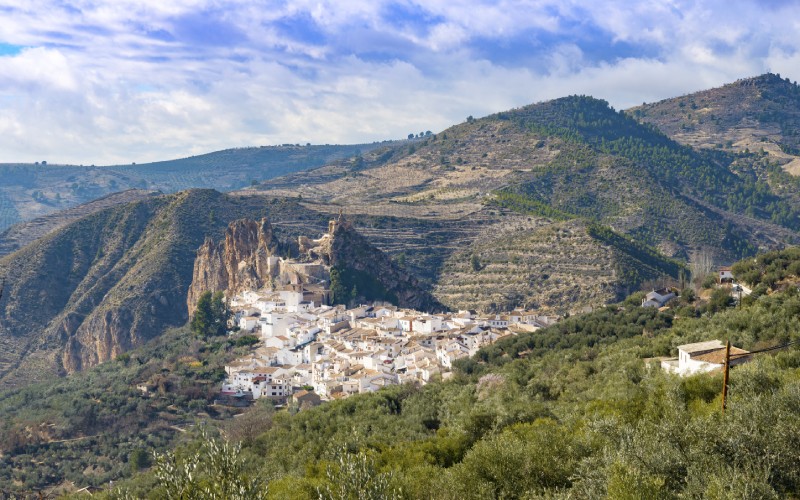 Castril de las Peñas has a curious history. The first to leave their mark in its vicinity were the Roman armies thanks to the great rock that protects the village. From this first stage comes its name, castrum, whose translation is close to that of ‘camp’. During the Muslim conquest, this enclave was of great importance for the military strategy of the Muslim army. At the top of the rock a majestic castle was built to serve as a defense against the Kingdom of Granada.

The village developed according to the culture and art of Muslim society, until the Reconquest of the Catholic Monarchs in the fifteenth century. From that moment on, Muslims, Jews and Christians shared a home. Thanks to this cultural mix, Castril de las Peñas enjoys a great architectural richness. It has also been the scene of clashes during Napoleon’s invasion and the Carlist Wars. 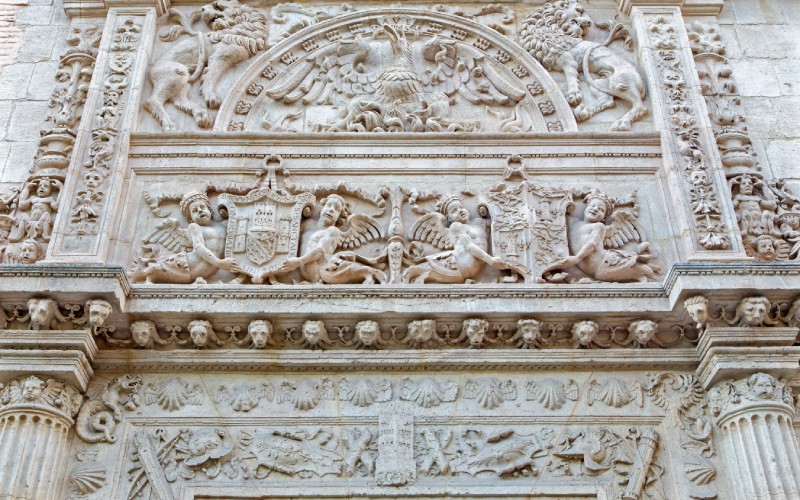 Detail of the Church of Castril. | Shutterstock

They say that when you meet the love of your life you know it right away. Something similar happens the first time you walk through the picturesque streets of Castril. As a typical Andalusian village, it has a special charm that captures the visitor. The first thing that catches the eye is the Peña del Sagrado Corazón.

A rock that rises 890m into the sky that becomes a viewpoint from which to contemplate the beautiful postcard landscape that is drawn on the horizon. This Natural Monument houses the figure of the Christ of the Sacred Heart and the ruins of the castle built during the Muslim conquest.

Walking through Castril de las Peñas is a gift for the soul. Its steep streets, the white houses with doors and windows defined in blue and the colorful flowers that peek out from the balconies are simply a pleasure to behold. In the center of the village is the Church of the Virgin of the Angels of Renaissance style. Its exterior features the Puerta del Sol and the Puerta de la Lonja, including the figure chosen to preside over the latter door: the Virgin and Child. The interior, on the other hand, is sober and calm.

One of the most striking features of this architectural monument is the view of the imposing rock. In fact, it is extraordinarily beautiful to enjoy this landscape at sunset. For example, on a pleasant walk through the gardens. In the old town itself you will discover charming little squares with terraces and restaurants that prepare the delights of Andalusian gastronomy. 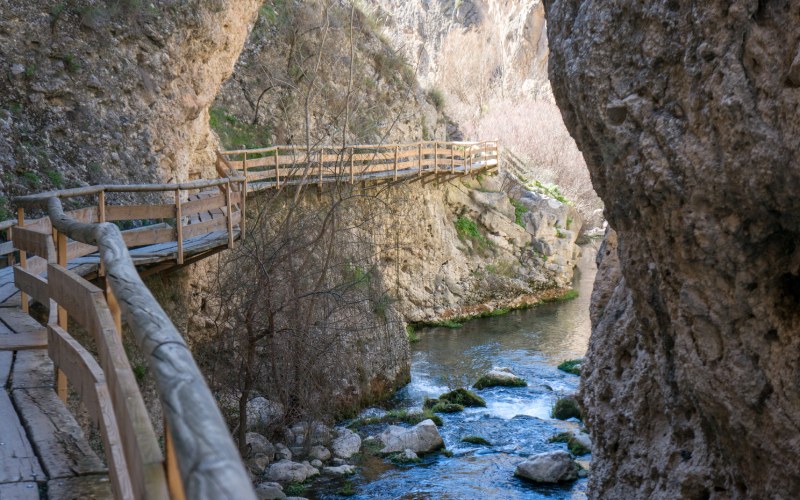 Whether you rather rest or live adventures, the truth is that Castril offers options for all tastes. And no wonder. The impressive natural environment in which it is located is worthy of all the expeditions in the world.

One of the best routes in the Natural Park of the Sierra de Castril is the Cerrada del río Castril. An imposing canyon that makes its way through suspension bridges and wooden walkways that ends in a small lake where a swim is almost mandatory. Although the excursion is made at different heights, the truth is that it is a route suitable for all ages that can be accessed on foot, by car or bicycle.

Another place of interest is the Portillo Reservoir. Finding it is very easy. You only have to follow the route of the Castril River uphill until you reach a viewpoint from which you can see the dam surrounded by pine forests, juniper and maple trees. A magical postcard of the sierra difficult to forget.

La Cerrada de la Magdalena is another of those spectacular places worthy of a postcard. It is a vertical wall of more than 150m high. The best of all? The beautiful route that leads to it. An hour of ascent decorated with ash trees, pines, rosemary and juniper escort the explorer in infinite natural viewpoints that end in this masterpiece of nature. 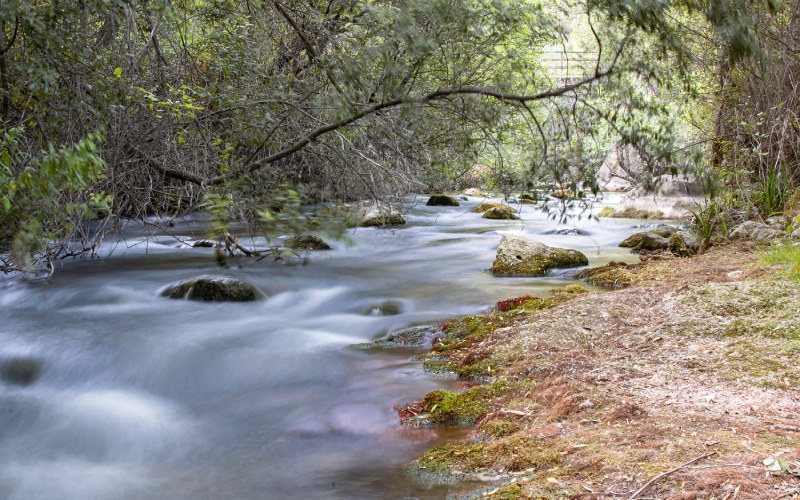 Another perspective of the river Castril. | Shutterstock

Castril is known for many things and one of them is for its long tradition in glass craftsmanship. According to the story, the Arab period served as a precursor for the beginning of the glass industry in Castril. Gradually it became popular, and in the 16th century the first glass factory was installed in which bottles, carafes and jars were made using the blowing technique.

Although today this factory no longer exists, it is very inspiring to walk through the streets of the village center and delight with some of the glass figures that are found along the way. Sometimes they are hidden behind a door. Others are on a railing, in plain sight. A whole cultural sample in which it is worth stopping.

And if there is an event marked in the calendar of every Castrilian, it is the patron saint festivities. The ideal time to learn a little more about the Andalusian culture, its delicious gastronomy and the characteristic joy of its inhabitants. At the beginning of October Castril celebrates its festivities with typical craft markets, the classic running of the bulls, music, fairs and samples of its popular culture. Highly recommended for anyone who wants to delve deeper into the traditional Andalusian folklore. 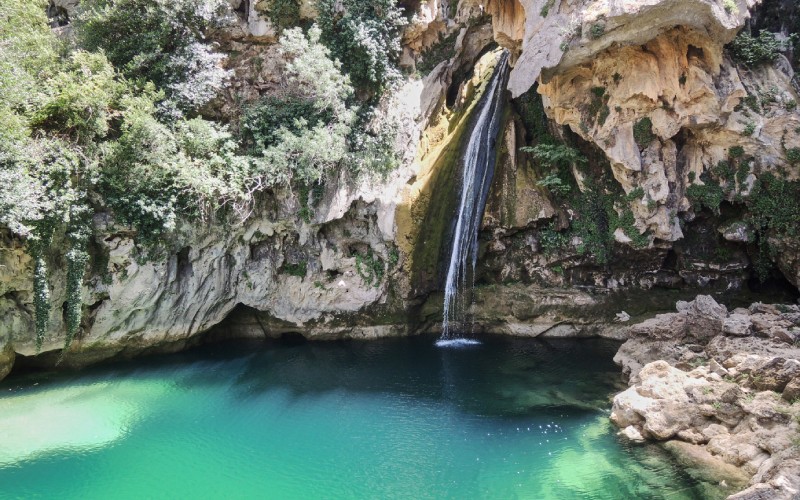 Very close to Castril are some places worth mentioning as, for example, the Natural Park of Cazorla. A beautiful green lung declared Biosphere Reserve by UNESCO and Special Protection Area for Birds. The villages of Castilléjar, Lanjarón, Montefrío and Guadix are other small treasures worth discovering.

Andalusia, culture, Granada, history, most beautiful villages, mountain villages
It may interest you...