The haven of Dalí and other artists

Located on the Cap de Creus peninsula, this beautiful coastal town still retains its ancient appearance. It is well-known for being the residence of the painter Salvador Dalí, which attracted other artists there. It is one of the most visited places in Spain, as many people stop there on their way to or from France. Do you want to discover everything you can visit in Cadaqués?

Plan your visit to Cadaqués and Port Lligat

The beautiful and small Cadaqués —together with the neighbouring Port LLigat— deserves a whole day of visits and walks. This is the only way to understand the identification that the brilliant Salvador Dalí had with them.

There are several interesting places nearby. In Figueres you can complete the knowledge of the life and work of Dalí and in Peralada you can see interesting museums and its castle. Cadaqués is in the middle of the Natural Park of Cabo de Creus, so it is an excellent base to visit it and take advantage of its wide possibilities of active tourism.

On our page Eating in Cadaqués we have compiled all the information about the local cuisine. Here is the history and what to see in Cadaqués.

History of Cadaqués and Port Lligat

The history of Cadaqués is very interesting. Its name could be related to its rocky aspect (cape of rocks). This beautiful and lonely enclave was occupied by Iberians, Greeks and Romans, and its heights were fortified. After the successive occupation of the Germanic populations that entered the peninsula through this area, the Arabs occupied the territory between 715 and 785, when the territory was occupied by the Franks.

Since the beginning of the 9th century there was a fishing village under the protection of the county of Empuries. In the year 1030 the abbot of the great monastery of Sant Pere de Rodas bought rights to the site from the Counts of Rosellón, sharing the manor with the Counts of Empuries. In 1280, Count Ponç V of Empuries confirmed a series of rights granted to the inhabitants by their predecessors in exchange for military services.

For centuries, the population was regularly targeted by pirates. In 1444 it was burnt down. As if this were not enough, in 1543 a fleet of twenty-five ships belonging to the famous Turkish corsair Barbarossa set fire to it again. This made it advisable to renew the town’s walls.

The beginning of prosperity

In 1655, during the Guerra dels Segadors, the king’s garrison had to surrender to the French army that supported the rebels. In the 17th century, a coastal watchtower called Castell de Sant Jauma was built.

In the 19th century the village prospered considerably as, in addition to developing its traditional fishing activity, it diversified its economy with trade and industry such as canning (anchovies). The important cultivation of vines was affected by the phylloxera epidemic around 1880. There was also a large emigration of natives to American lands. In this way, when retired and rich people (these so-called “Indians”) returned, they built beautiful and original houses.

The painter Salvador Dalí settled in the town. He invited many artists and intellectuals to discover what to see in Cadaqués. For example, he invited Buñuel, Eugeni d’Ors, Duran Camps, Picasso, Joan Miró, Lorca, Rafols-Casamada, Richard Hamilton and Duchamp, who ended up spending seasons there.

What to see in Cadaqués and Port Lligat

We start the visit in front of the façade of the Parish Church of Santa María (16th and 17th centuries). Due to its elevated position, it is a viewpoint over the bay and the surrounding area. This temple that we see in Cadaqués was built over the remains of the one destroyed in 1543 by Barbarossa and still retains some Gothic elements.

Inside, the Baroque Capella Fonda and the astonishing main altarpiece of the Virgen de la Esperanza stand out. The altarpiece was saved in 1936 by the imaginative initiative of building a wall in front of it. It also contains a 17th century Baroque organ which is included in everything you see in Cadaqués.

Salvador Dalí and his inspiration

In the 1940s Salvador Dalí began to build his house in Port Lligat. He fell in love with this place in 1930 and first occupied a fisherman’s hut. He lived there until the death of his wife Gala in 1982. This house is a real labyrinth that always leads to one of the most common landscapes in the artist’s dreamlike visions: the bay of Port Lligat.

The place is now the home of the Salvador Dalí House Museum and a visit to it helps to understand his most intimate life and the studios where he worked. It is complemented by the so-called Cadaqués Museum, which also focuses on the figure of this Catalan artist. These are two emblematic places to see in Cadaqués.

The Ermita de San Baldirio (early 18th century) is still linked to the town’s seafaring life. It is the heir to a prayer room erected as a gesture of gratitude to Pope Pius V for his help in the battle of Lepanto to put an end to the piracy that affected this coast so much. It is another of the temples to be seen in Cadaqués.

A walk through its streets

Built into the Town Hall, in the Silví Rahola street, you can see part of the structure of the medieval wall, which has practically disappeared.

Along the streets you can see many modernist style houses, often built by indianos. For example, the Casa Blaua and of the Rahola, as well as the Colom Tower. In a classicist style, it is one of the leisure centres of 19th century bourgeois society: the Casino de la Amistad.

In the public spaces of this town there are several sculptures to be seen in Cadaqués. That is, the one signed by Dalí himself and located in Porlligat: La barca y el ciprés. Also of great interest is the female figure that the famous modernist sculptor Josep Llimona placed in the town’s cemetery. A cultural visit to make in Cadaqués that you cannot miss. 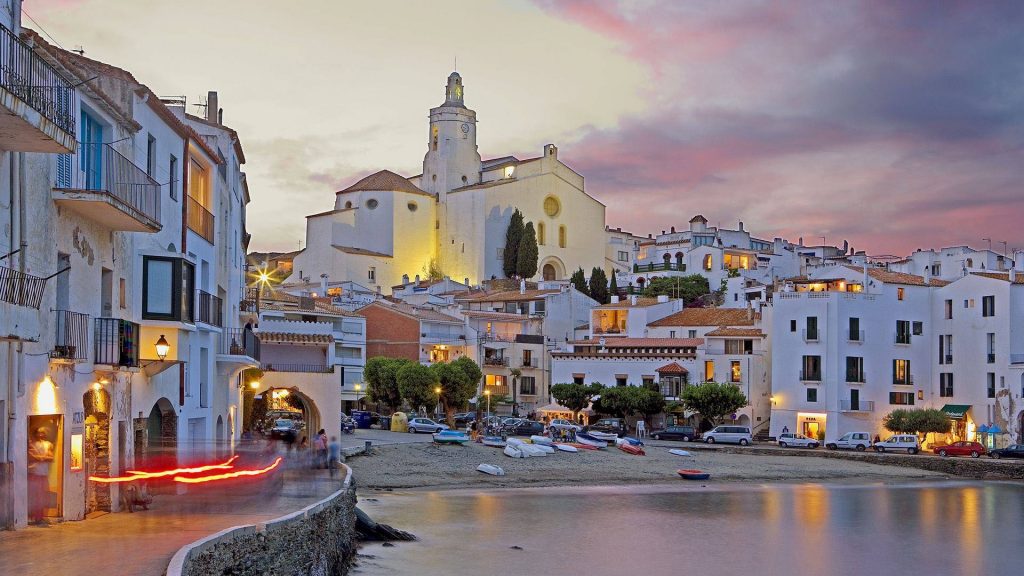 Cadaqués with Santa María Church in the background

In the vicinity of the port is the Cala Nans lighthouse (19th century), complemented by a small dock. Likewise, the Espai Cap de Creus has its headquarters in a magnificent Faro (1853). It is one of the oldest lighthouses on the Catalan coast. There the visitor can understand the geological and natural richness of this protected landscape in the surroundings of Cadaqués.

There are several car parks distributed around the town centre such as the Parking Saba or the Parking de la Playa del Ros.

It is said that it is possible to recognize a…

5 abandoned villages in Spain
[vc_row][vc_column][vc_column_text]Spain is known for its big cities; the big cities with tourist, commercial and financial Más información

The most beautiful river sources in Spain
[vc_row][vc_column][vc_column_text]If you do not live near the beach or have a swimming pool, the river Más información

The most beautiful villages of the Maestrazgo, the impressive region between Castellón and Teruel
The Maestrazgo is a historical region shared between the provinces of Teruel and Castellón. It Más información