Although Madrid is a spectacular city, like other major Spanish cities such as Seville, Málaga and Barcelona, sometimes it is necessary to take a break from its streets. Fortunately, the capital offers many options to change the urban environment for the countryside and breathe some fresh air. Whether by public transport or short trips by car, one of the best alternatives is to explore its mountains. That is why we bring you this review of the most beautiful towns in the mountains of Madrid.

This town in the mountains of Madrid is located in the heart of the Cuenca Alta del Manzanares regional park, next to the Santillana reservoir. Thus, the first part of its name is clear. The second comes from the time of Alfonso X the Wise. He assigned this town and other villages to his sphere of influence in order to avoid the influence exercised by the lordships of what is now the province of Segovia. Its medieval castle was the work of Juan Guas, favoured by the powerful Mendoza family. This architect is famous for his Mendoza connection and the Infantado Palace in Guadalajara, a masterpiece of Isabelline Gothic. This style, halfway between Gothic and Renaissance, was reflected in the fortress. 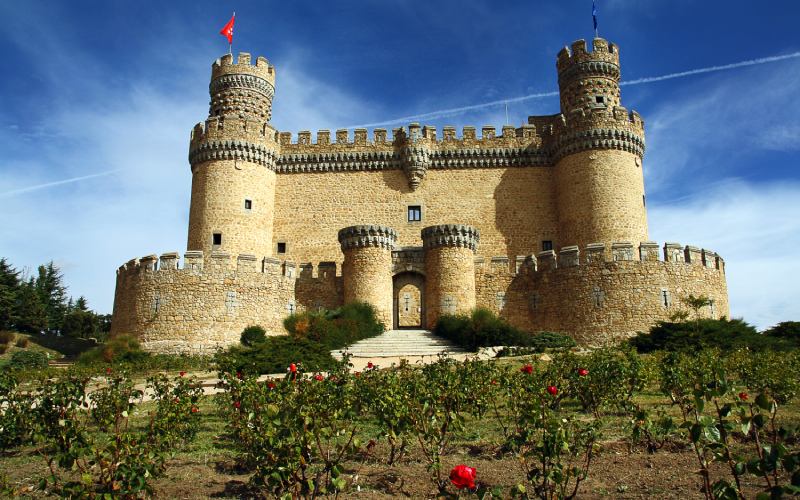 As well as its classic mountain style and plenty of places to stay and eat, Manzanares El Real has access to stunning natural landmarks. The ascent to Peñalara is a perfect day hike. However, one can bathe in its reservoir in summer or enjoy the source of the Manzanares at Ventisquero de la Condesa in the meantime. There are also a myriad of streams, springs, hills or small valleys to visit. 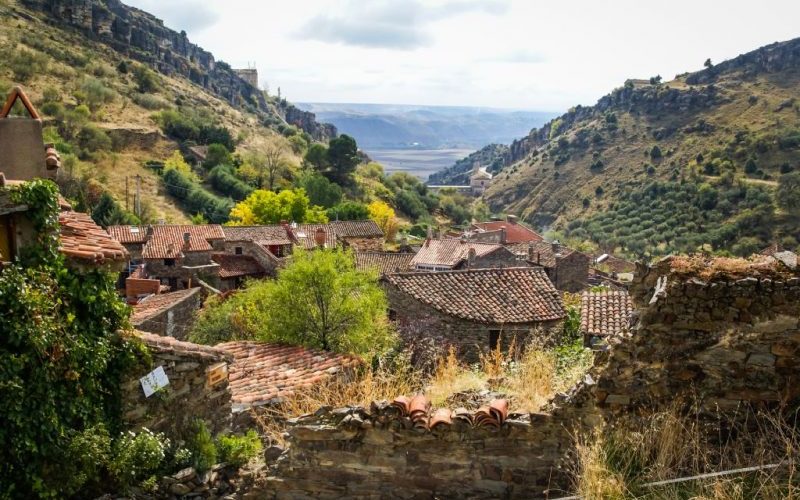 If you visit this town in the mountains of Madrid you can enjoy a unique isolated atmosphere. So much so that for centuries Patones remained relatively isolated from the rest of society. Thus, legends say that it was the result of the escape of the Visigoths during the Moorish conquest. They remained hidden in the mountains, developing a peculiar character.

This town in the mountains of Madrid has an indissoluble connection with one of the great Carthusian monasteries in the country: El Paular. This monastery is therefore one of the things you must see if you visit Rascafría. From the nearby bridge of El Perdón, there are hiking routes ideal for beginners that allow you to see the Lozoya valley as well as beautiful waterfalls. The building itself houses an outstanding art collection. 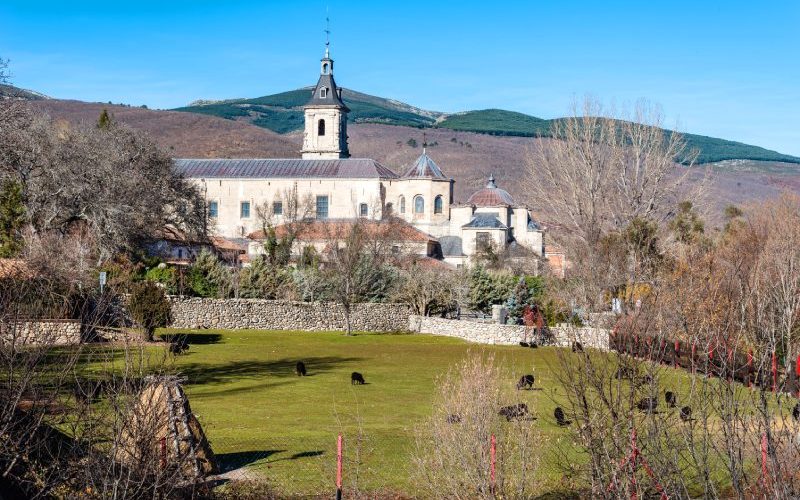 Regarding the population centre, it is a good example of those that can be seen in the Guadarrama massif. Like many other nearby towns, its history pointed to both Madrid and Segovia. The high mountain passes made it a good place to take a break. It has interesting monuments such as its post house or the church of San Andrés Apóstol. It is also a good access to Peñalara and several pine forests. Finally, we must not overlook the Forest of Finland and the Giner de los Ríos Arboretum, two remarkable wooded parks.

In the eastern mountains of Madrid, close to the province of Guadalajara, lie some of the most beautiful towns in the region. El Berrueco is set against the backdrop of the La Cabrera massif and the Atazar reservoir. It is therefore very close to Patones de Arriba, making a joint visit perfectly possible. 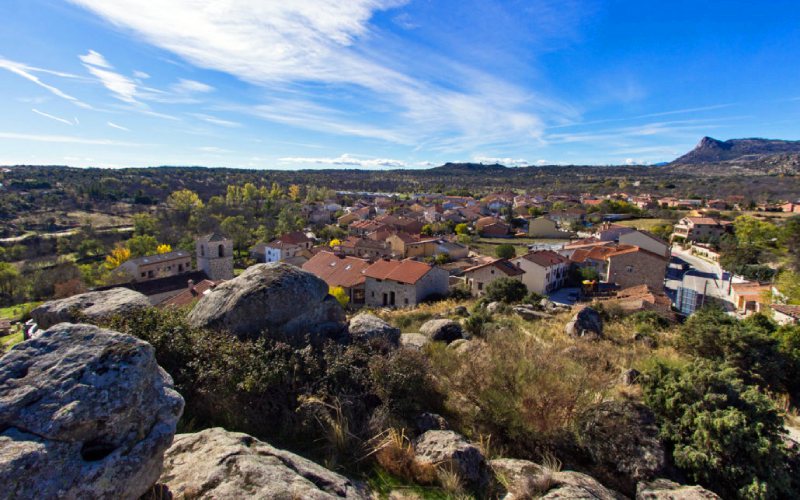 The area has always been a border area, due to its location between mountain passes overlooking the Lozoya valley, the Castilian countryside and the Alcarria. The Roman bridge over the Jóbalo is a good example of this. It is believed to have formed part of an ancient route, even before Rome. It is one of the great attractions of El Berrueco, but not the only one. Its pillory, popular architecture and surroundings associated with water form an enchanting ensemble. 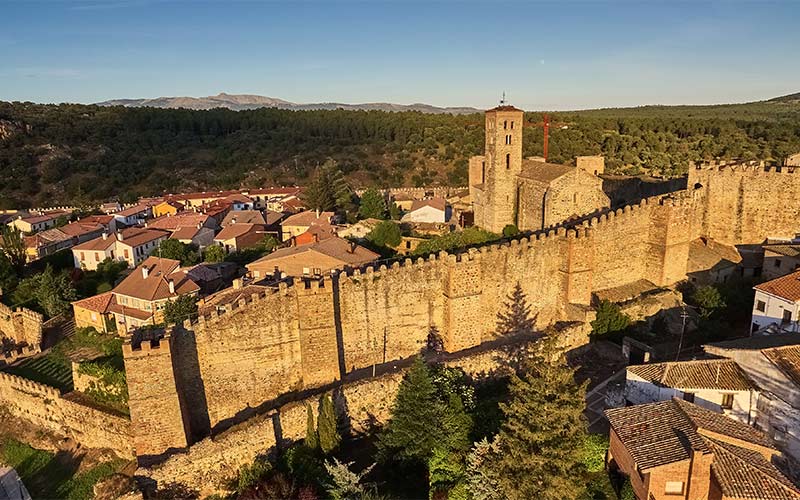 This versatility has been the key to its success. Bathing in its marshes is a very popular summer alternative. It can easily be combined with walks around the town, an ideal activity for the mid-season. You can also enjoy its walls, fortress, church and streets. It has both restaurants where you can eat a good barbecue and areas where you can enjoy tortillas and breaded steaks in the open air as in the good old days.

Guadalix’s enviable location, in an extensive valley, as well as its good connection with the capital through the A-1 explain its great development. As such, it is one of the main centres of the mountains of Madrid. Its appearance is the result of the improvements it underwent during the first half of the 20th century. In spite of its outstanding churches and parks, its town hall stands out above all. It is best known for being a key part of the film Bienvenido, Mister Marshall. Thus, it has gone down in history as one of the most famous popular film sets in Spain. 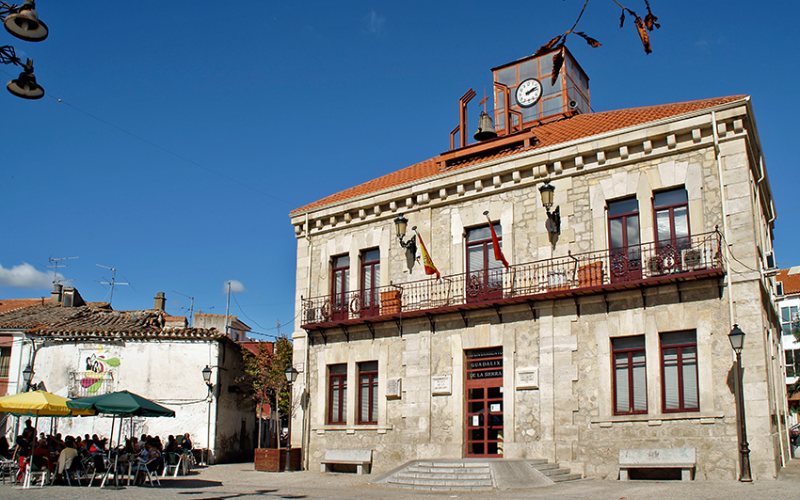 All around the town there are various river courses where recreational areas abound. The local forests are another popular option for walks. Mountain ascents and active tourism alternatives, which take advantage of the caves and mountain environment surrounding Guadalix, complement the attractions of the locality.

Once again it is time to return to the northernmost point of the region to continue with this review of the most beautiful towns in the mountains of Madrid. In the shadow of the massif crowned by the Pico del Lobo, the highest peak in Guadalajara, lies this typical town. Very small, it preserves a charming old atmosphere. The past is an essential part of its attraction, through its old mill or apiary. The black stone architecture typical of the area is the main feature of its houses and monuments. 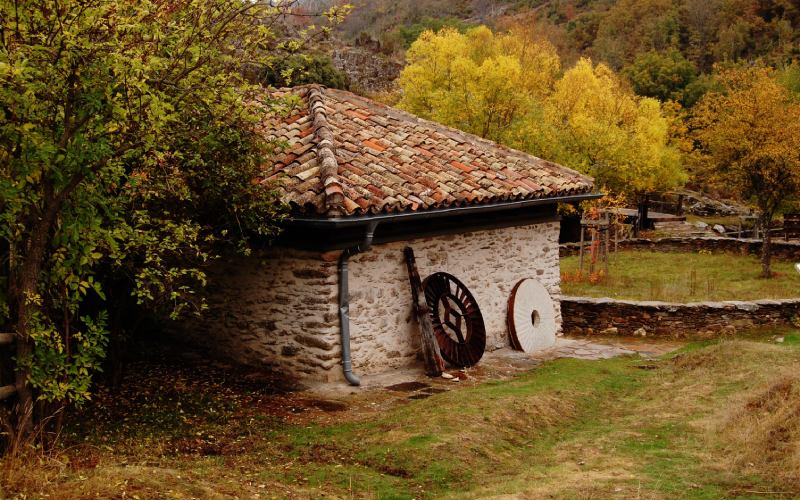 As a great addition to its beautiful and tiny old town are its surroundings. Most notable is the Montejo beech forest. It is one of the two most important beech forests in this part of the Sierra de Ayllón, together with the Tejera Negra. Both are, in fact, World Heritage Sites. Therefore, a visit is almost a must. This also allows you to get to know the varied local flora and fauna.

Well connected by road and train, in particular with the special winter railway, Cercedilla is one of the emblematic towns in the mountains of Madrid. Nearby is the Navacerrada pass and the ski resort of the same name. There are also places that can complement your visit, such as La Fuenfría or Becerril de la Sierra, part of the poets’ route. It is even possible to consider a trip to the Segovian side of Guadarrama and visit the Royal Site of San Ildefonso. 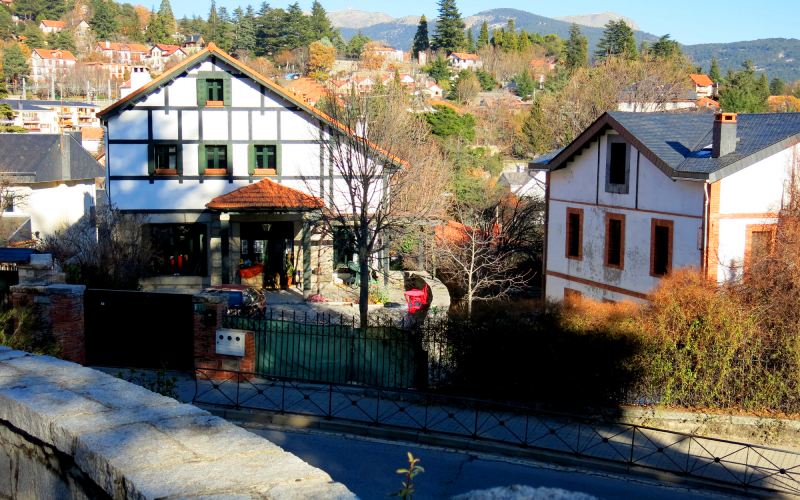 The wooden houses with cross beams, very typical of the high areas of Guadarrama, are part of a group of houses in which mountain tourism is the main protagonist. Regardless of the time of year, there is always something to do. For example, in summer there are its small lakes. Meanwhile, in winter, its ski slopes and snowy landscapes stand out.

Sierra del Lobosillo or Rincón forms part of the eastern foothills of the mountains of Madrid. Halfway between El Atazar and La Hiruela lies Puebla de la Sierra. This makes it the most isolated of the towns mentioned in this article. The valley of La Puebla, which it heads, is a natural spectacle in which the human elements are perfectly integrated. A walk through it is therefore a highly recommended option, especially in autumn.

Until 1940 its name was much more sinister. At that time it was La Puebla de la Mujer Muerta. The reason is none other than the resemblance of the surrounding hills to the nickname. Its relative solitude meant that it acquired a certain independence and decision-making capacity as early as the 15th century. Its streets are a mixture of old elements, such as the church, and more recent ones, such as the town hall and the sculpture park.

At the foot of the Sierra de Guadarrama, to the west, awaits the most spectacular monument of all those in the mountains of Madrid. This is the magnificent monastery of San Lorenzo de El Escorial. This landmark linked to the figure of Philip II is a major work of art and is worth a trip in its own right. Its famous college, art gallery, floor and pantheons are well worth a visit. 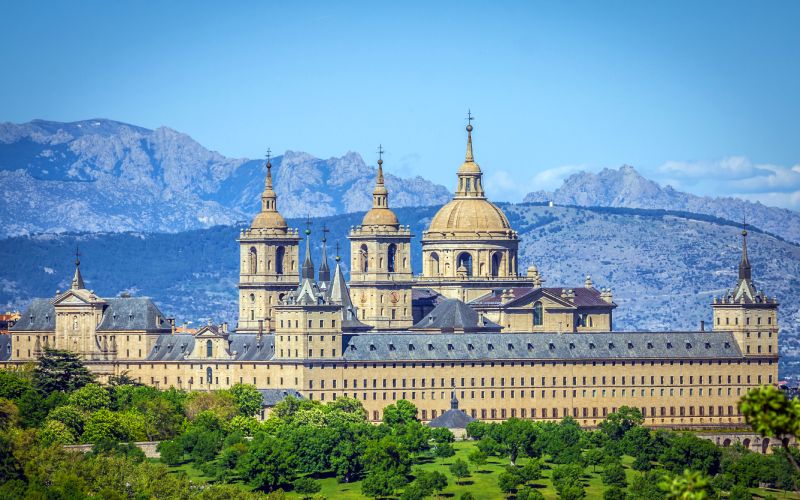 El Escorial and the mountains in the background.

Around the monastery is a town that grew, like El Pardo, linked to its relationship with the royal site. With the peaks of Abantos and Las Machotas watching over it from above, the old town has also established itself as a magnificent place to eat. Its restaurants range from Michelin-starred restaurants to traditional ones such as El Charolés, which specialises in cocido madrileño stew.

This town with the name of a mountain range is strategically located. The Puerto del León pass and the Guadarrama tunnels on the A-6 are a key passage to Castile and León. Its status as a transit area dates back to Moorish times. It is precisely for this reason that it suffered severely from the consequences of wars such as the War of Independence and the Civil War. The result of this is its modern appearance. Despite this, it has great charm and is a popular holiday area or second home. 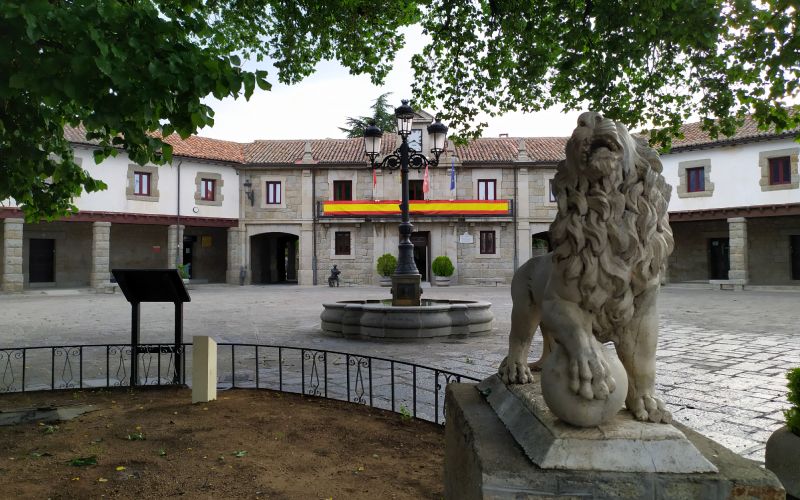 Its surroundings, apart from having a multitude of hiking trails, were famous for its air. For this reason, several hospitals and homes for the sick were built nearby, especially for tuberculosis patients. The association between Guadarrama and health also materialised in spas for wealthy people during the 19th and 20th centuries. Of these institutions, in many cases nothing more than gloomy ruins remain.