Just as in Andalusia there are the White Villages, in Sierra de Ayllon there are the Black Villages, among which Valverde de los Arroyos stands out. This is a small and picturesque village in the province of Guadalajara, Castile La Mancha, characterized by its slate houses. Legend has it that it was one of the last villages that God created, as he did so when the darkness of the night came. For that reason, it is black. It is also very close to the spectacular Despeñalagua Waterfall.

The temple is one of the major architectural attractions of Valverde de los Arroyos. It is also the greatest example of the Black Villages of Guadalajara. Slate, clay and wood were the only materials available in the past for its construction, so today they are the protagonists in the facades of the village. 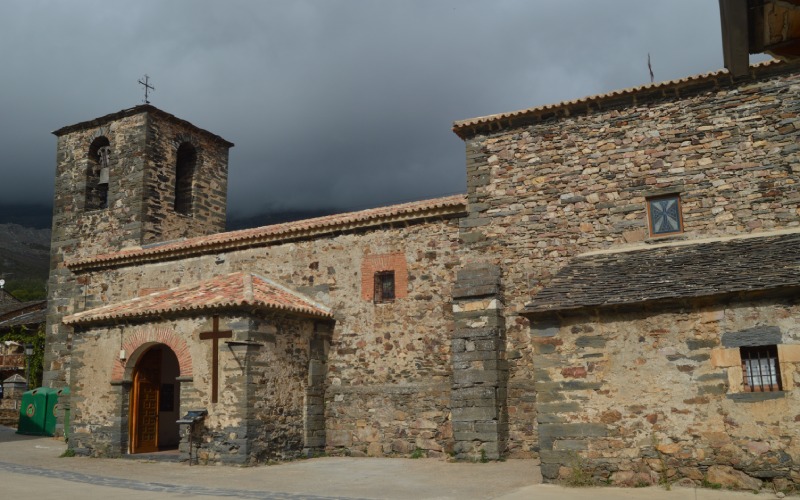 The history of this church has its starting point in two friars of Valverde de los Arroyos, Brothers Pedro and Manuel Monasterio Mata, who went on missions to the Philippines. From there, they commissioned the construction of the church and sent 46,000 Reales to carry out their work. As a curiosity, it was raised by a group of Galicians together with the help of some local people from Valverde. The construction was completed in 1954.

The church contains some objects of interest, such as the processional cross from the 16th century, the triptych of the Descent, the baptismal font, the banner or the harmonium. Likewise, this is one of the constructions by which Valverde de los Arroyos is part of the Most Beautiful Villages in Spain Association. A club to which Guadalupe, Grazalema, Puebla de Sanabria, Betancuria or San Martín de Trevejo also belong.

This is where the church of San Ildefonso is located. The place is famous for practicing some of the traditions of the village, such as bowling. This is a typical competition in Guadalajara. In the case of Valverde de los Arroyos, it brings together players and spectators in the main square. Two teams play with a ball made of wood and the losers usually pay the winning team drinks. 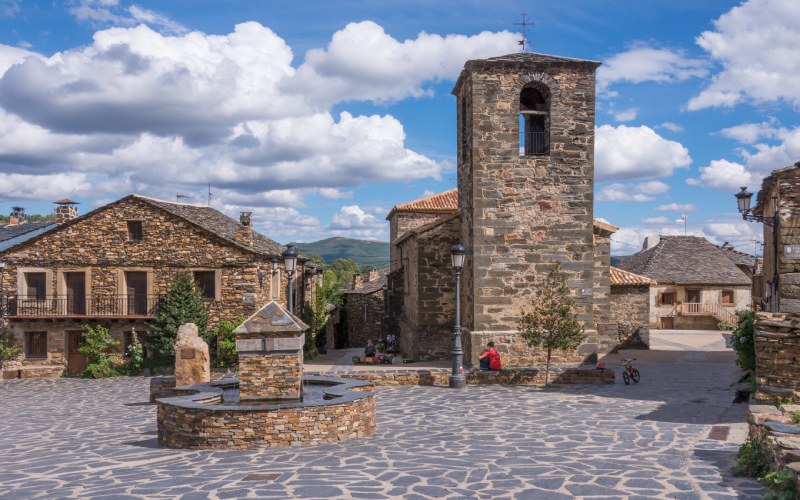 The main square is also a good place to observe its characteristic black architecture. In addition to the materials used, these houses usually have in common the vegetation that covers the facades, decorated with rose bushes, vines and ivy. They also coincide in the structure of the buildings, as they all have two floors, plus the chamber and the attic. As for the interior, most of them have a stable, a tool room, a kitchen, a courtyard, a living room, a dining room and the bedrooms.

It should be noted that the architecture of Valverde de los Arroyos is slightly different from that of other Black Villages. In its case, gneiss stone is used. It is a very interesting quartzite, because when the sun reflects on it, it gives off a luminosity that combines very well with the dark colours of the slate.

The Museo Etnográfico is located in what used to be the school and the teacher’s house. Here you can learn about the textile activity of the area, which was of great importance to the people of Valverde for many years. The loom in the museum has been used to make blankets and clothing that can be found in all the houses in the village. 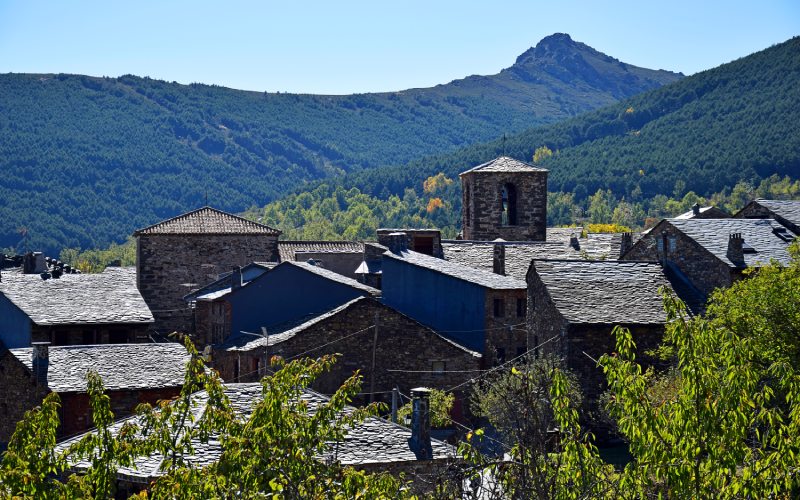 You can also see what the typical kitchen of the houses was like, where food, warmth and conversation rose up as humble protagonists. The museum also houses tools that were used for farming and slaughtering. To complete the visit, there are usually temporary exhibitions of different themes such as paintings, rags and costumes or lamps and lanterns. 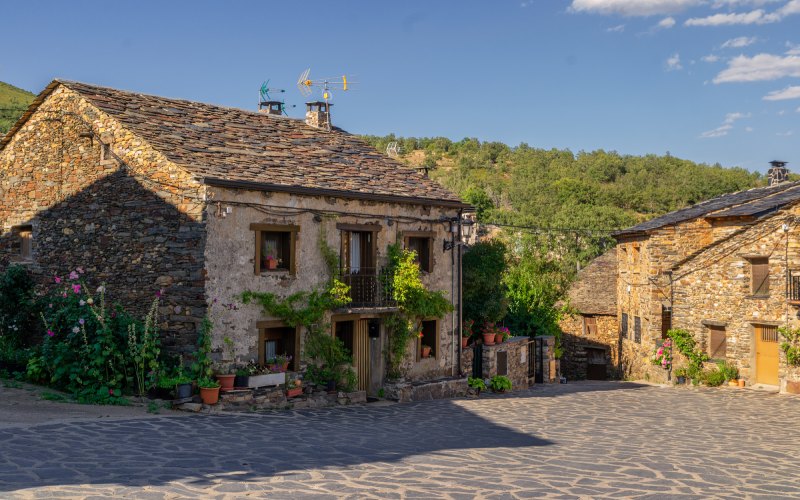 The hermitage is a 19th century construction made, of course, with the same slate as the rest of the buildings in the town. Located at the entrance of the village, it is dedicated to the virgin that gives it its name and preserves the remains of a small altarpiece that was destroyed during the Civil War. It is worth noting that until the 1990s, this was the burial place of the Valverdeños, who now have a municipal cemetery. In addition, the hermitage is one of the curiosities of the village, since on its floor you can see the inscriptions of the space that each neighbour used to occupy. 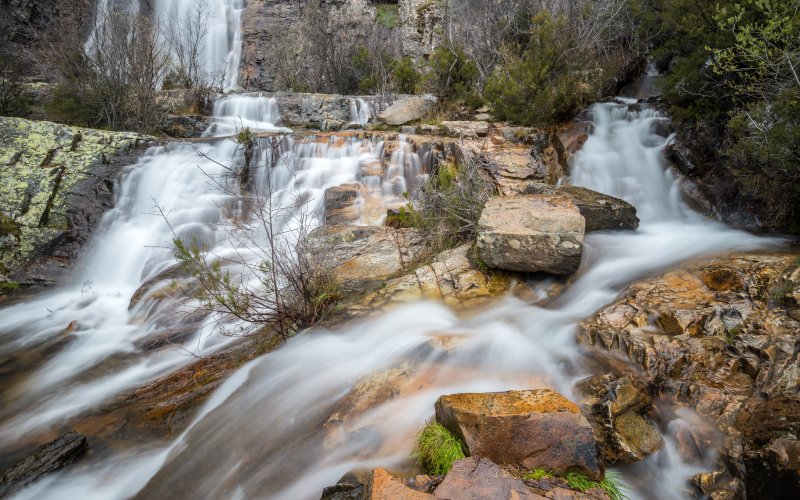 Just 15 minutes by car from Valverde de los Arroyos is the incredible Despeñalagua waterfall, also known as Chorreras de Despeñalagua. You can also walk along low-difficulty trails for 60-90 minutes. These are actually several waterfalls that run for 70 metres on the northern slope of Ocejón Peak. In winter it is common to find them completely frozen, which makes them even more spectacular. In addition, there are paths that allow you to see them both from below and from above. Below the main waterfall, other smaller waterfalls are formed.

The surroundings of this village are so spectacular that there are several more trips worth taking. The best known are the Ruta de la Miel (Honey Route), which passes through the El Gollindo natural area, and the climb to Pico Ocejón, perfect for beginners in mountain hiking because of its low difficulty.