Resting place for the Bourbons

The Real Sitio de San Ildefonso has one of the best sets of fountains of the world, surrounded by beautiful gardens around a charming rococo palace. It is a cool and pleasant summer resort and has numerous winter sports options.

Plan your stay in San Ildefonso

As a holiday destination chosen by exquisite personalities who could have chosen any other part, the Reales Sitios de La Granga de San Ildefonso, the Palace of Riofrio and Valsaín can occupy us at least one full day of visits. Its main milestones are detailed in the section What to see in La Granja.

Being inside the Segovian slope of the Natural Park of Guadarrama there are numerous options of active tourism. Both winter sports and canoeing, balloon ascents, etc. It is also possible to spend one or more days of excursion in the historical center of the neighboring Segovia.

In the fifteenth century there was a temple dedicated to San Ildefonso erected at the behest of King Henry IV. He came near to hunt from the nearby city of Segovia.

The Catholic Monarchs in 1477 donated that church to the Jeronimo monks of the Segovian monastery of El Parral. They were the ones who built a lodge and the livestock facilities to which the locality owes its nickname.

Since the reign of Enrique IV, a fond of Segovia, in the neighboring town of Valsaín there was a palace from which to practice hunting in the surrounding forests. But in 1697 it underwent a fire, of which only the current tower in ruins remains.

Before the inadequacy of recovering the palace of Valsaín, the wife of the first king Bourbon, Isabel de Farnesio, decided the purchase the possessions of the monks. And from 1721 the palace was built.

It became a place frequented by successive kings, so it was the stage for important events. Maria Luisa de Parma and the future Charles IV married in 1765. It was also where the successive Treaties of San Ildefonso (on the international relations of Spain) were signed.

In 1789 Charles IV signed the so-called Pragmatic Sanction, which abolished the “Salic Law” (and which would provoke the First Carlist War to be published more than forty years later). Although the most spectacular event was the mutiny of the sergeants of the palace, revolted in 1836 to restore the Constitution of 1812 (“La Pepa”). 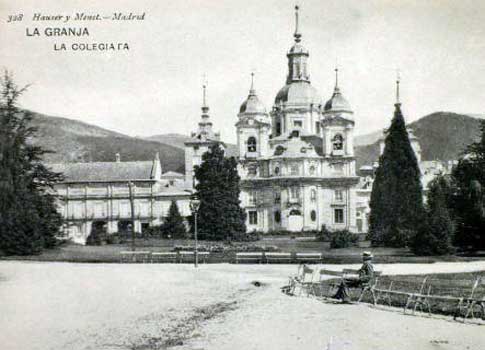 In 1727, in view of the need to have crystals and mirrors for the new building, a factory was promoted to replace that of Nuevo Baztán, troubled by the remoteness of wood forests to nourish its furnaces. So it was brought from this the manager Buenaventura Sit, which started his oven.

To ensure fuel supply, in 1761 the Crown imposed on the city of Segovia the sale of the surrounding pine forests. Throughout the century its growth was strengthened, introducing new French and German techniques that made it one of the best qualities of the world, becoming Royal Factory in 1836.

In 1911, the deficient installation became a worker cooperative. It was closed afterwards and reopened in 1982 as the National Glass Center Foundation.

Parallel to the Palace, buildings were built to house the servants. Also others by the nobles who attended the kings or who wanted to relate to them. His polo and golf course encouraged the court of King Alfonso XIII.

There was born in 1913 Don Juan de Borbón, father of King Juan Carlos I. In 1918 the palace suffered a fire, in which important works of art were lost. Another great part of its heritage has been being transferred to the Prado Museum.

What to see in La Granja de San Ildefonso

The visit to the Royal Site of San Ildefonso usually begins by the old palace enclosure, bounded by gates once guarded by the Alabarderos. The first thing that attracts attention are the extraordinary trees planted there. First Indian chestnuts, followed by redwoods and cedars in the square where the palatial buildings are located.

The palace was begun by Teodoro Ardemans in 1721, after 1734 the Italian Francisco Juvara continued, and in 1736 Juan Bautista Sachetti continued.

Originally thought to be the retreat of the abdicated King Philip V, on retaking the throne, his wife, Queen Elizabeth of Farnese, extended the initial project. It presents a mixture of French, Italian and Spanish baroque styles.

The rectangular building has four wings at the ends of which are the Patio de los Coches and Patio de la Herradura. In the center of the facade located before the door of Segovia is the Collegiate designed in 1723 by Sabatini and decorated by the painters Francisco Bayeu and Mariano Maella.

Next to the sacristy is the Royal Pantheon where its founding kings lie: Philip V and Elizabeth of Farnese.

In the Courtyard of Herradura is the gateway to the palace. Much of the furniture and artwork of their rooms are not original, due to the fire of 1918 and the transfer of many of their paintings and sculptures to the Prado Museum.

Among the most interesting units of the visit are the Salón de Países, the dining room, the Sala de Lacas, the Sala de mármoles or Mirror Cabinet which sought to reflect nature and water inside, whose ceiling is decorated with the Rape of Europe. Also the Sala de la Paz with the Rococo fresco by Bartolomé Rusca of 1744.

On the main floor is the Chinese-Japanese Room decorated with lacquered teal and Paolo Panini paintings on the life of Christ. Other interesting spaces are the Gala Diner, the King’s Official Office (with portraits of the dynasty) and the Throne Hall (which overlooks the gardens). 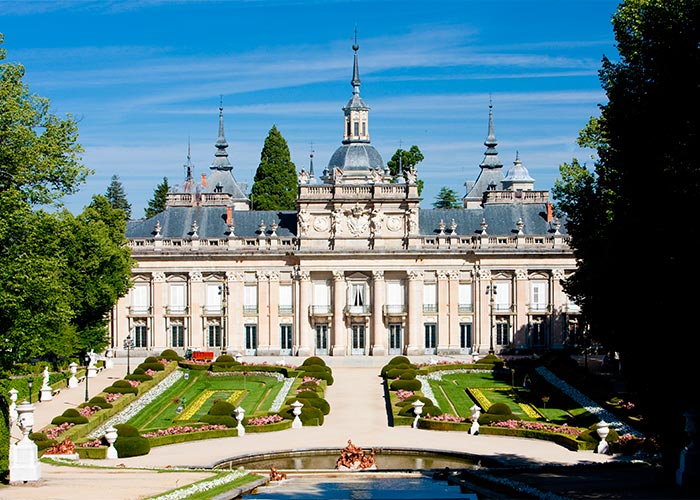 The so-called “Casa de las Damas” houses the Tapestries Museum, which comprises a large collection of Flemish, French and Spanish pieces from the 16th and 17th centuries.

The astonishing gardens and fountains

Its beautiful gardens were designed in French style, complemented with Italian taste in the scenographic conception and in the ornamentation. For example; harmonic flower beds, pictures of flowers, symmetrical compositions with walls of vegetation, great avenues lined with linden and a few chestnuts of indian that give A Hispanic touch.

The fountains are arguably the best ensemble of its kind in the world. In addition to the beauty of the mythological scenes with figures in marble and lead, the design of the same allows to generate impressive aquatic games that are put into operation each month of August and for specific celebrations.

Among them is La Gran Cascada, the fountain La Fama (it can raise the water up to 40 meters in height) and Los Baños de Diana (which sometimes light at night), among others.

If Versailles followed Apollo-Sol in honor of Louis XIV, La Granja revolves around Diana and her nymphs, for a female deity is in accordance with the rococo aesthetics. The fountain La Fama and the fountain of Neptune follow the Aeneid of Virgil.

The allegorical figures reproduce the stipulated in the iconography of Cesare Ripa and the decorative groups of animals and children are inspired by Versailles. The sculptures were made between 1721 and 1746 by René Fremin. They are supplied with water in a large artificial pond called El mar. It located at a higher height than the palace, at the beginning of the forest.

Royal Factory of Glass and Crystals

Leaving the palace grounds and turning to the right, on the Paseo del Pocillo is the Royal Factory of Glass and Crystals of La Granja, a building built in 1770 by Joseph Diaz Gamones. At the end of the XVIII century it was the main glazing center of Europe, requiring the construction of an annex in Coca.

Today it is the headquarters of the National Glass Center Foundation, where lamps, molds, containers and instruments are exhibited and there is an interesting store.

If, on the other hand, you take the road in the direction of Segovia, you will find the deviation with the road that leads to the Real Sitio de Riofrío. It is found in an oak grove where you can observe deer, wild boar and fallow deer.

It was commissioned by King Ferdinand VI to remove from the court his stepmother, Isabel de Farnesio, very likely to interfere with his government. She came there from its conclusion in 1751 and 1759, when received the throne her son Charles III.

Given the superiority of the facilities of the neighboring palace of La Granja, Riofrio would only be frequented by Prince Francis of Assisi, husband of Queen Elizabeth II, as well as King Alfonso XII.

It is a square building with pink facades with a classical design patio, a grand baroque staircase, an elliptical chapel, romantic rooms, rooms decorated with tapestries, paintings and sculptures, and furniture from the 18th and 19th centuries. It includes an interesting Hunting Museum with dioramas of dissected animals.

Castile and León, palaces, parks and gardens, Segovia
It may interest you...