Campillo de Ranas, like Valverde de los Arroyos, is one of the so-called black villages. These towns are very characteristic because their architecture blends in with their natural surroundings, as the houses are built with slate slabs. As for its location, it is located in the heart of the Sierra de Ayllon, in the province of Guadalajara. Furthermore, as a curiosity, a local character is featured in the Episodios Nacionales by Benito Pérez Galdós. With the name of Viriato, he was born in this beautiful village in Castile La Mancha. 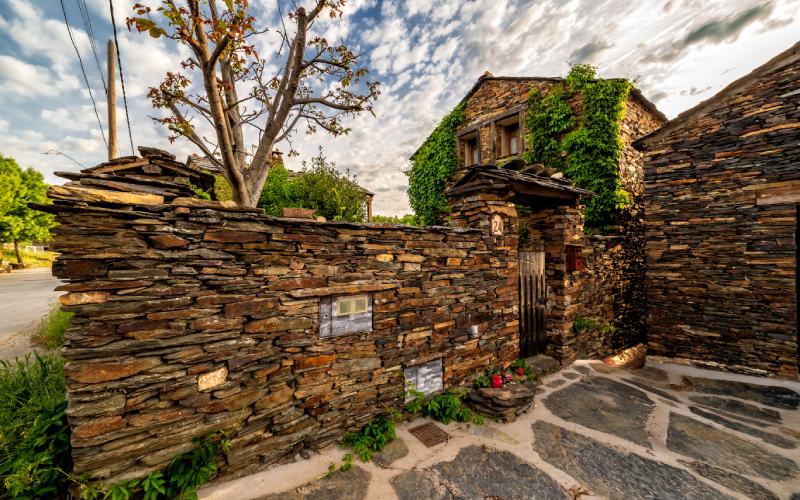 Like many other villages in the northwest of the province, Campillo de Ranas is famous for its black architecture. This name is due to the dark colour of the black slate with which most of its traditional houses are built. This makes it one of the most beautiful villages in Guadalajara. The roofs are usually two-sided and are also made of slate slabs, including a fireplace. As for the interior, most of them have two floors. The lower one was dedicated to the family’s life. Meanwhile, the upper one was destined to store the straw. It is also common to have stables or barns attached to the house. 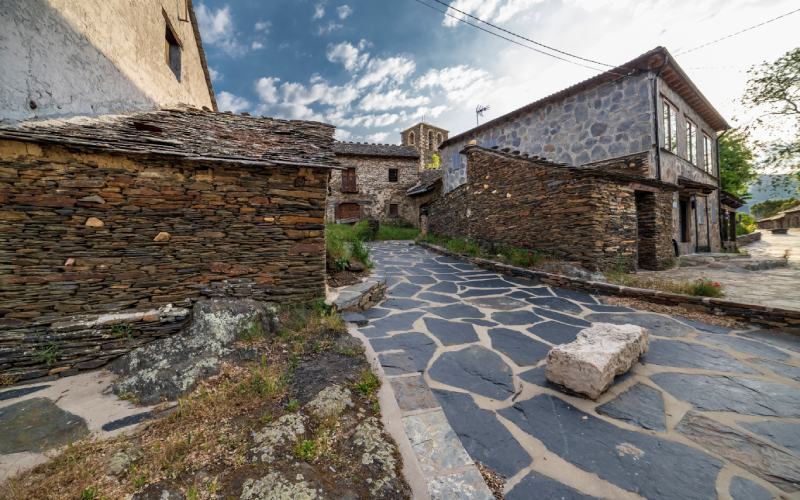 You only have to take a walk through the village to see this black architecture in its buildings in detail. These materials give the village a chromatic uniformity that coexists in perfect harmony with its natural environment. Majaelrayo or Valverde de los Arroyos are its partners as the most distinctive black villages. Some of the buildings that stand out most in this respect are the viewpoint of the Fuente de las Ranas and the church of Santa María Magdalena.

It is a well-known construction of the village made entirely of slate. From this viewpoint, you can see spectacular views of the Ocejón peak. This is a highly recommended place to take a camera or simply enjoy the Sierra de Ayllon from a privileged position. In winter it is usual that the snow is included in the picture. In a nearby house there is a small tribute in gratitude to Benita. She is a very beloved neighbour of Campillo de Ranas who dedicated her life to helping others. The plaque reads: “All of us who knew you miss your kindness. Thank you, Benita, for the beautiful lesson your life taught us”. 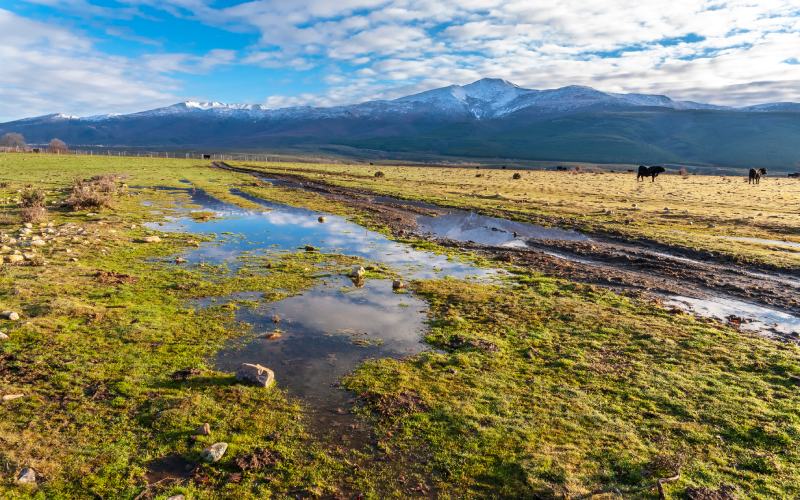 Another well-known place is the Roble Hueco, the most representative tree of Campillo de Ranas. It is of an unknown age, but it has been there for so many years that not even the oldest people in the village have seen it grow. The Campilleros are very fond of this tree, which is why many of the local accommodations are named after it.

This temple is built with the black slate typical of this area of Guadalajara mixed with limestone, which gives it an aesthetic somewhat different from that of the rest of the town, but at the same time very characteristic. It is a Romanesque style church and very simple, in which its tower and main façade stand out. 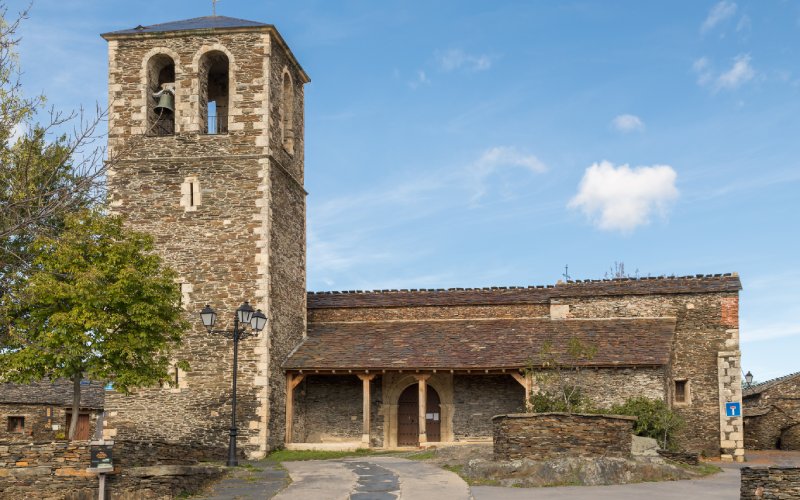 Right next door, in the old priest’s house, there is another tower with a sundial that is considered one of the symbols of Campillo de Ranas. These buildings are located in the square, where the locals celebrate their festivities and their traditional bowling game. It is especially typical to play it during the festivities of its patron saint: the Virgen de las Angustias. 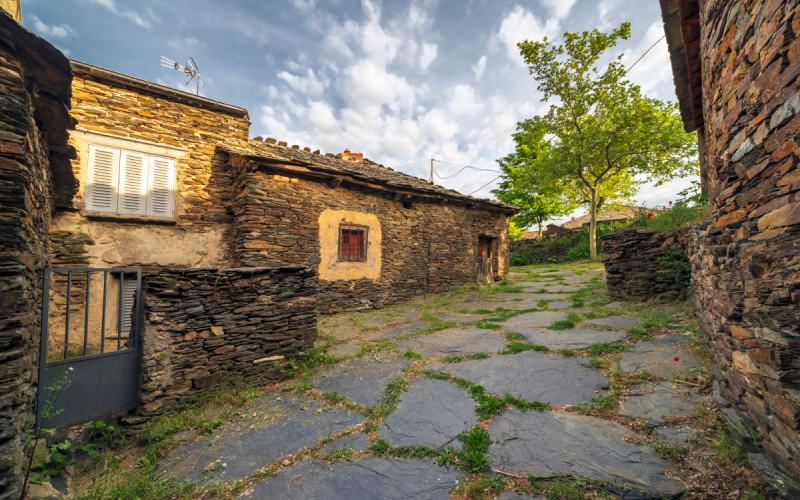 In this museum you can see several models of buildings of this village with the already mentioned black architecture. They are made by Juan Andrés Roizo, a painter who lives in the town that gives its name to the space. Without a doubt, it is a great opportunity to get to know the houses of the black villages, both inside and out. In this museum you can also see models of objects and spaces related to the traditional trades of the region. For example, a chocolate factory, a farrowing barn or a plow. In short, the Museo de Maquetas Roizo is not only a place of art, but also an ethnographic one. Not in vain, it shows the past and present life of the Campilleros in a way that is very loyal to reality.

In addition to the Black Architecture, Campillo de Ranas is a village that stands out for its privileged location. It is located in the heart of the Sierra de Ayllon, within the natural park of the Sierra Norte de Guadalajara. However, the massif also covers mountainous areas of Segovia and Madrid. This allows its visitors to make numerous trips to enjoy its natural sites. 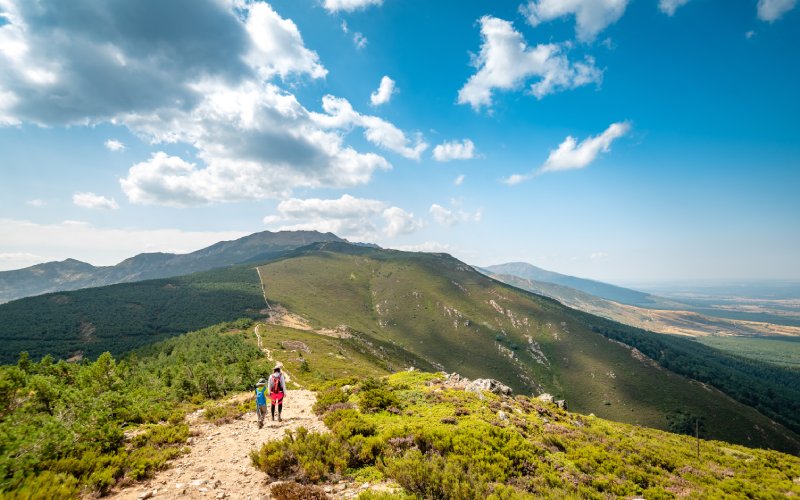 One of the most beautiful routes that can be done in the area is the Senda de los Inmortales, which runs between hundred-year-old trees. The ascent to Ocejón peak, which crowns the mountainside, is also a highlight. An easy route even with snow, climbing it is a typical excursion for the people of Guadalajara all year round.  Meanwhile, the route of the Barranco del Jarama, which ends in a viewpoint with spectacular views.

It is important to know that Campillo de Ranas has several districts that depend on the town: Campillejo, El Espinar, Roblelacasa, Robleluengo, Matallana, El Vado and La Vereda. You can take advantage of your visit to this area to go on a route through the black villages. All of them have their typical architecture in which the black slate is the protagonist. 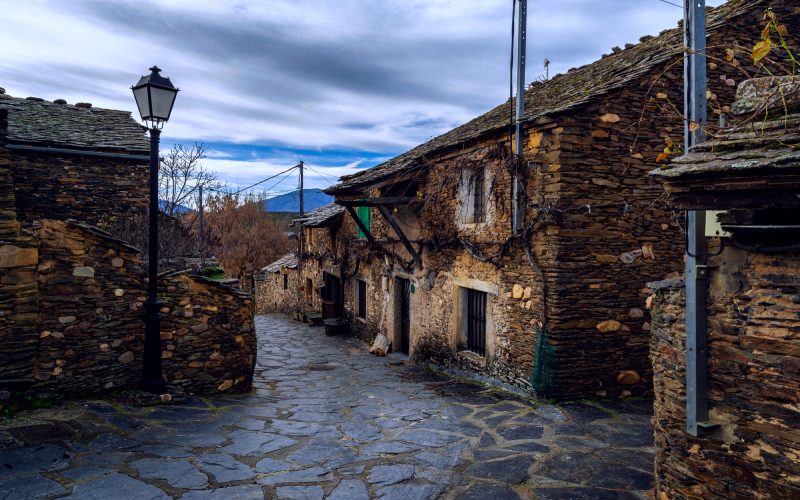 One of the most surprising facts about these towns is their low population density.  Campillejo has only 17 inhabitants, El Espinar 16, Roblelacasa 22 and Robleluego 28. Matallana, El Vado and La Vereda are currently uninhabited. A sample of the depopulation and geographical distribution typical of the Serranía and the rest of Guadalajara. Of the last three, the church of La Blanca, the hermitage of the Virgen de las Angustias, the hermitage of La Majaílla and the church of the Inmaculada Concepción stand out. All of them are ascribed to black architecture.