The Way to Santiago has led to the construction of an enormous number of monuments in Galicia. Also that today there are known landmarks that otherwise would be visible to a few. A good example of this is the church of San Xoán of Portomarín, or San Nicolás. It is a temple that combines the sensation of robustness of a fortress with the elegance of the Romanesque that was moving towards the Gothic. A building that could have ended up under the waters of the Belesar reservoir, but which fortunately was saved by a historic move. 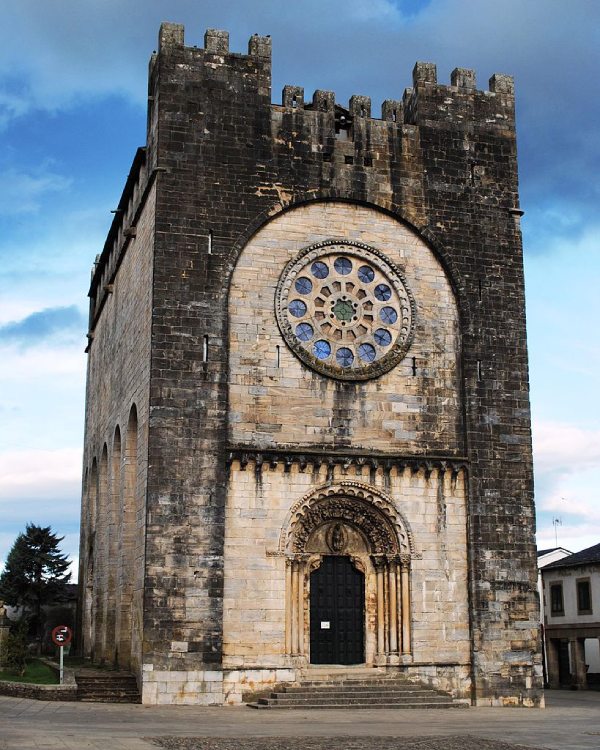 The work of the Hospitallers that was saved from the waters

It was in the early 1960s when the aforementioned swamp was opened. Some dams in the municipality of Chantada, kilometers to the south, completely turned the local course of the Miño. Now huge, crops were flooded and the gorges were largely hidden. A case similar to those of Gorg Blau or Mont-Rebei. In time, towns like Portomarin were forced to move or die by drowning.

Así, los vecinos dejaron atrás la ubicación original de Portomarín. Cuando la sequía azota se pueden ver restos del antiguo Thus, the neighbours left behind the original location of Portomarín. When the drought hits you can see the remains of the old medieval bridge, based on another Roman one, which crossed the Miño. Also walls of houses and forts. Not those of San Xoán/San Nicolás, which were entirely moved to the new town. Stone by stone, it was taken to its current location. Reconstructions and more movements saved other spaces. Monte Cristo replaced the districts of San Juan and San Pedro and life continued.

Centuries before, during the Middle Ages, Portomarín became a favourite passage of the Miño. Several Military Orders passed through the place, such as the Temple or the Hospitallers. The Knights of St. John would be the most relevant. During the 11th century warlike vicissitudes led to the demolition and reconstruction of the Roman bridge. Favoured by the Jacobean cathedral and the kings of León, the town went on to have a hospital in San Juan in the 12th century.

From the end of that century or the beginning of the next one is the church of San Xoán. As can be seen, it is not only a temple, but also a fortress. A single nave, high walls, guard post, arrow slits and battlements make it clear that taking it would be complicated. Inhabited by the Hospitallers, it lacks the rough character of other buildings of this type, as can be seen in Artajona or Monzón. It is very slender and elegant. A striking mix of features marked by the circumstances of the violent Middle Ages. 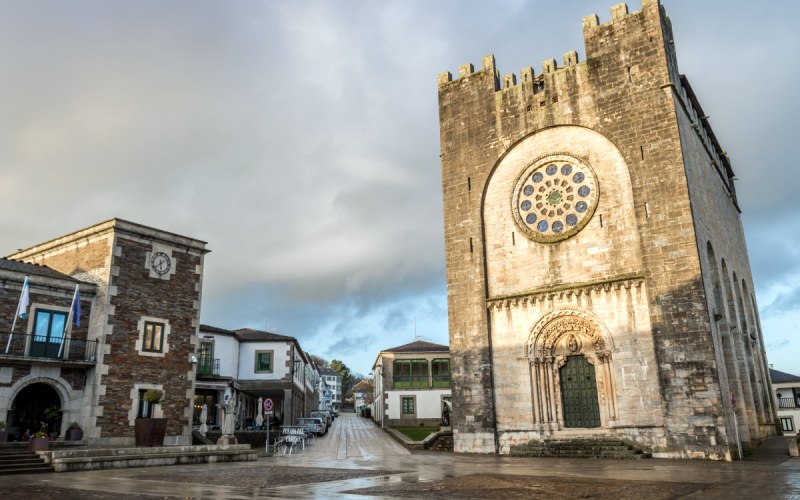 The late Romanesque with Gothic influence is clearly seen in San Juan de Portomarín. On the outside, in addition to the rectangular nave and the elongated chancel finished in a semicircle, three doorways stand out in a magnificent state of conservation. They reflect the manners of the master Mateo, to whose workshop the design and execution is attributed. One of these entrances is located on the west side and forms part of the front facade.

The semicircular arch entrance has a tympanum in which the figure of Jesus Christ appears. A triple archivolt surrounds this solid space that fills the span of the arch. The rest of the sculpture calls the attention of the 24 elders of the Apocalypse with their musical instruments. These figures are a classic mateano and have great protagonism in the porticos of La Gloria in Santiago and El Paraíso in Ourense. A whole on which there is a rose window, exceptional for its size and that points to the mentioned gothic. 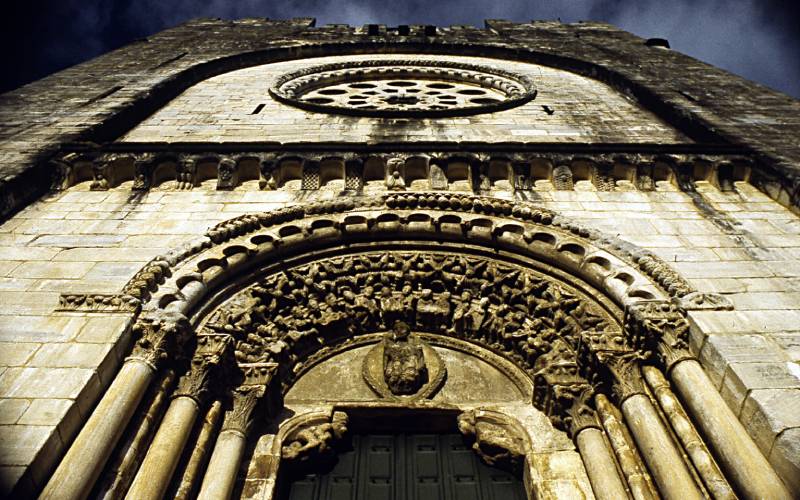 West facade of the church with the 24 elders of the Apocalypse. | Wikimedia

Meanwhile, the southern facade shares with the rest structural elements, such as the type of arch or the number of archivolts. In this case the protagonist of the tympanum is believed to be Saint Nicholas, the owner of other beautiful churches, one of the owners of the temple. He appears surrounded by two other figures, probably followers. The appearance of beasts in capitals and other decorated architectural elements stands out. Something that again points directly to the master Mateo. 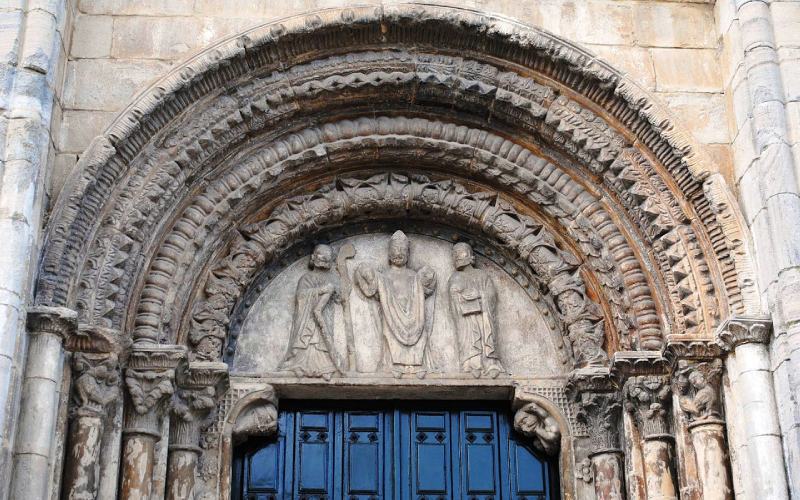 That leaves the northern facade. In its tympanum an Annunciation is displayed and therefore the Virgin Mary and the archangel Gabriel. This nature is clear from the fact that its wings are open. Between both figures there is a plant that has led to many interpretations. It seems that it is related to the Trinity, because the number three marks its composition. 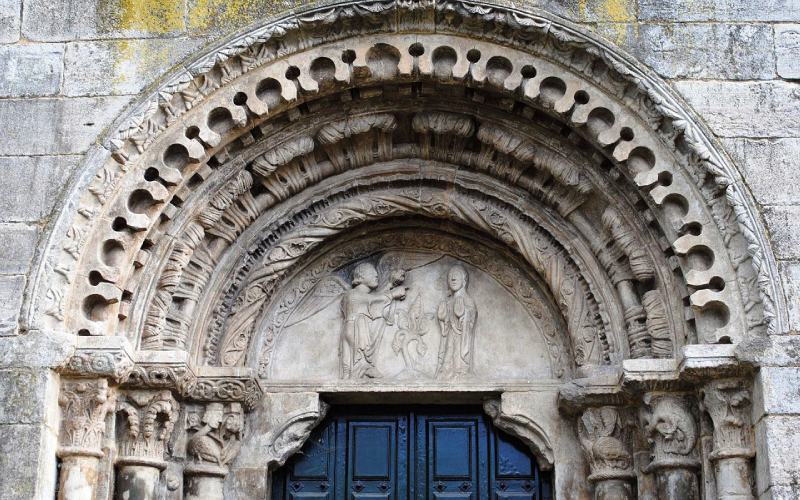 In addition to all this, on the outside we must point out the rose window to the east of the nave. Also wide and beautifully made, it brings even more light to the temple. On the inside you can see the great vault that serves as a roof, with transversal arches supporting it. The chancel is accessed through an opening also finished in a very wide arch. In this way the elements appear perfectly integrated and harmonious. The apparent simplicity hides a design of great architectural difficulty due to the height of the church-fortress of San Xoán. 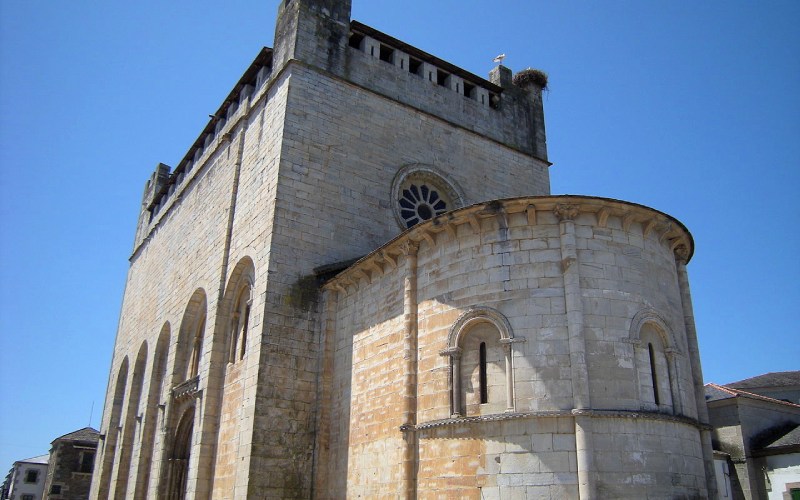 The unbreakable connection between San Xoán and the Way to Santiago

The best way to know San Nicolás or San Juan de Portomarín is through the French Way to Santiago. Only 92 kilometers separate it from the Jacobean capital. A key figure, since the distance required to obtain the Compostela is currently 100 kilometres. Entering this stretch and being part of the most travelled route by far, it is one of the best known temples of all the routes to the tomb of the Apostle. Normally you can reach this town from Sarria, if you are walking and not cycling, the most popular starting point. 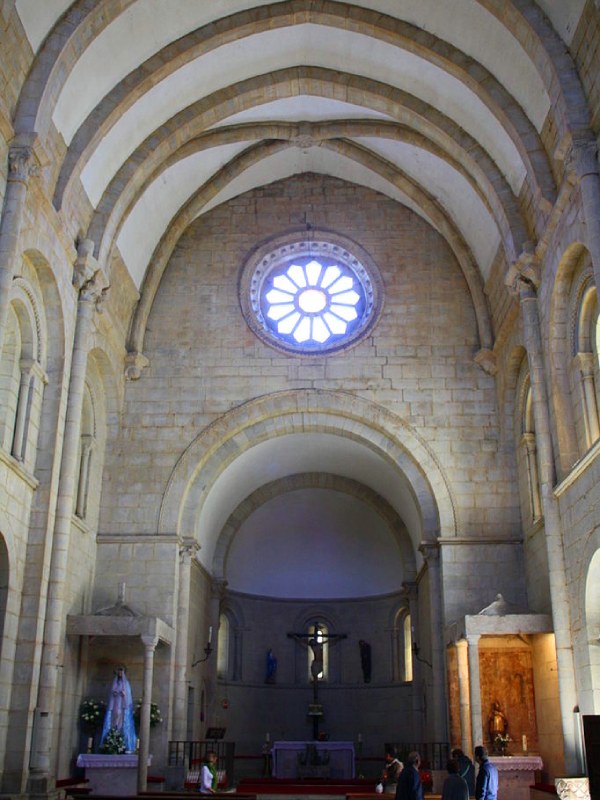 Interior of the church. | Wikimedia

In any case, Portomarín can pride itself on being a true French transit area since its origins in the Middle Ages. As mentioned, it was the need to pass the Miño of the pilgrims that motivated the growth of the village. Also of that the cathedral seat of Compostela and the royalty of León contributed donations. At the same time, this key character in the pilgrimage served as an appeal to the Military Orders to establish encomiendas.

Therefore, all Portomarín, San Xoán included, is heir to the Way to Santiago. Despite being in a new enclave since the 1960s, the relocation of the church and other buildings gives it an ancient atmosphere. Likewise, crossing the enormous new bridge over the Miño is a dizzying experience. The stairs that follow, however, are feared by many pilgrims. For the natural route of the route the next stop is usually Palas de Rei.

However, regardless of the Way, the extraordinary character of the temple makes it an attractive tourist destination. With good options for trying the Galician gastronomy, there are landmarks nearby that are also worth a visit. For example, the monastery of San Estevo, in Ribas de Miño, whose church has similarities with San Xoán. Lugo and its Roman walls are close by, while Santiago itself or Cebreiro are also possible alternatives, although somewhat further away.