The largest of the Balearic Islands is always associated with tourism. Along with Ibiza, Formentera and Menorca, even Cabrera, Mallorca is one of the biggest attractions in the Spanish Mediterranean. It is precisely for this reason that it is often associated with paradisiacal coves and water sports. However, its slopes and interior also hold spectacular landscapes. Without reaching the volcanic heights of the Canary Islands, the Serra de Tramuntana mountain range allows you to get lost among torrents and trenches. Next to the highest point of these mountains is the Gorg Blau reservoir, an enclave of calm beauty that should not be confused with the landmark of Girona with which it shares its name. 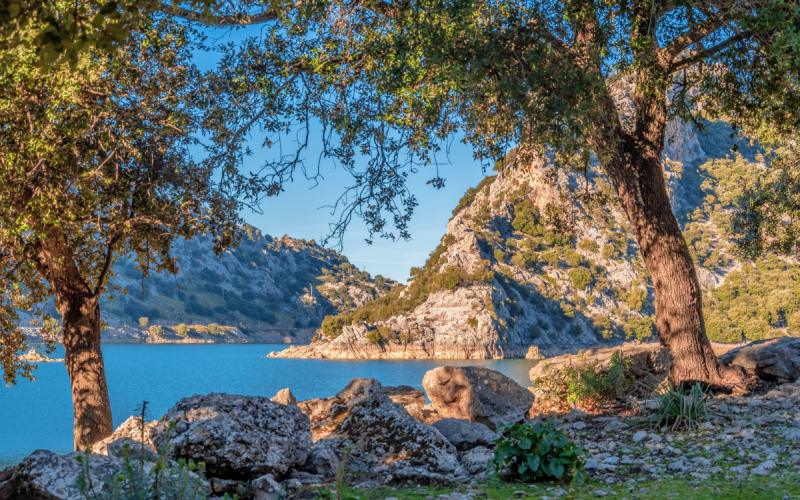 The recent landscape of Gorg Blau

Although it seems to be as natural as the lake of Sanabria, Gorg Blau emerged in the early 1970s. Mallorca only has two reservoirs and this is one of them. The place was flooded between 1971 and 1972. An initial plan foresaw more, but in the end only Cúber followed. The reasons for this are that at the beginning they wanted to generate electricity above all else. However, growing tourism made supply needs prevail. Thus, these two were chosen in a quick and less expensive move. 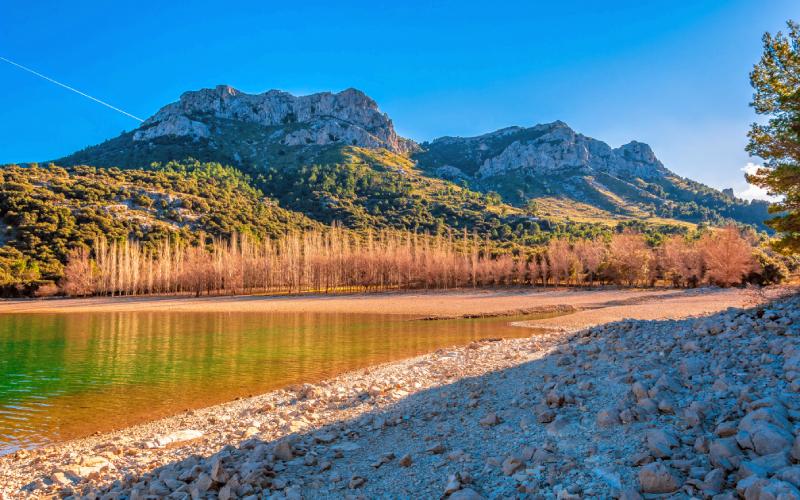 In Spanish the name means “blue well”. A good description for this body of water, which has a beautiful shade of this colour. The name is common, as we have seen, and is also shared in Spanish with a well in the province of Burgos. It is also located between the two major Mallorcan slopes, which makes its sides very vertical. To the west is the Puig Mayor, at 1,445 metres. On the opposite side is Puig Massanella, with 1364. It is almost continued by the Cúber reservoir, and both can be seen from several points.

A road runs along the western side of the artificial lake, on a very enjoyable route with parking facilities. This makes it very easy to reach it from the Escorca side or the Sóller and Biniaraix side. Elongated, with its bright blue that contrasts with the green and grey of the mountain, it is especially suitable to go there in winter. That is when it is most crowded. In addition, it is possible to find the snowy Tramuntana. In this case, the visual spectacle is overwhelming. 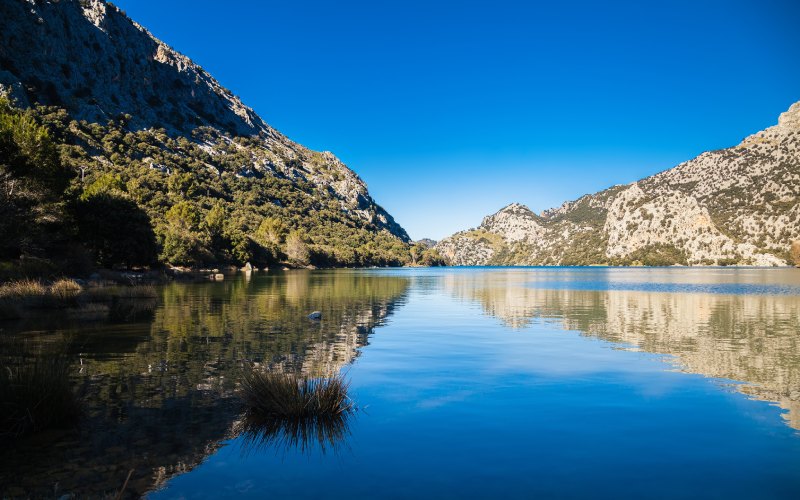 A controversial reservoir on a celebrated river

Before the reservoir was built, Gorg Blau’s electrical potential was already being exploited. Thus, in 1906 the nearby site of Cals Reis was the site of an electricity generation plant. At that time and until it was decided to build the current water infrastructure, the Gorg Blau stream was famous for very different reasons. As now, its beauty was admired, which was totally different. Instead of a quasi-alpine lake there was a deep gorge. What was common was the intense blue of the waters. 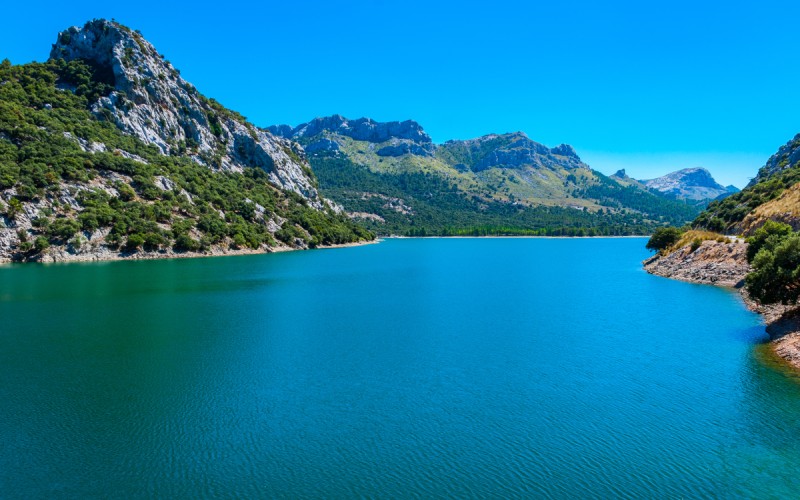 At the northern end of Gorg Blau, from the Escorca side, a tunnel gives access to the reservoir by road. This generates an impressive feeling. At that point there was once a bridge, which took advantage of the maximum narrowness of the gorge. Thus, the descriptions are reminiscent of other points in Spain such as Mont Rebei, the Caminito del Rey or the Cares route. Thanks to being between the two highest mountains on the island, the verticality was exaggerated. The path ran along the lower part, with the rocks above the head. 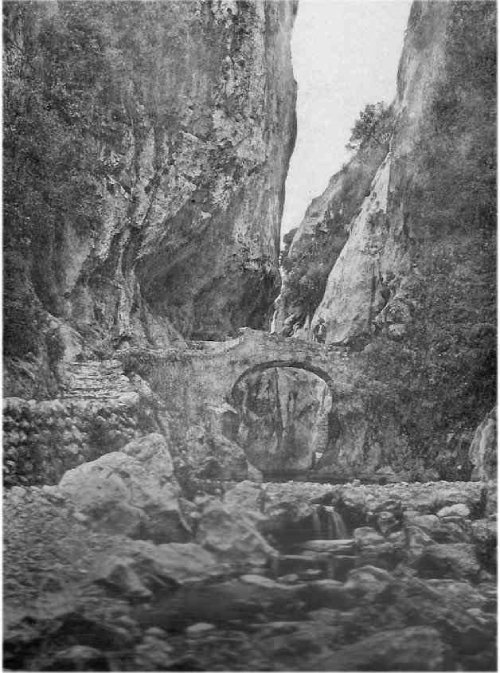 This stream, which originates before the reservoir and then continues to the Pareis stream in a stretch called Sa Fosca, attracted the attention of Balearic and peninsular writers. For example, the Barcelona writer and journalist Pau Piferrer i Fàbregas toured the site with the lithographer Francisco Javier Parcerisa. Together they wrote the first volumes of Memories and Beauties of Spain. This great work is a fantastic example of romantic travel and archaeological literature. Gorg Blau is referred to as an exceptional, “quiet” and to some extent sad place. 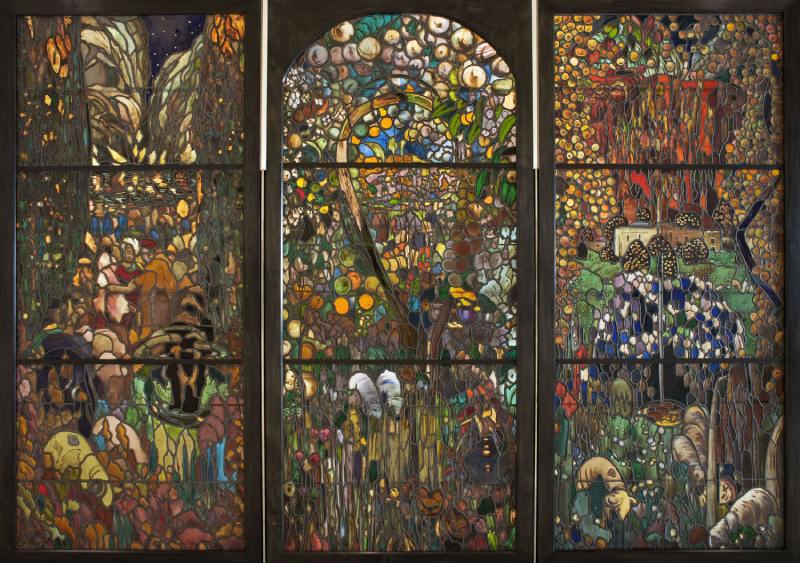 Joaquim Mir, also a painter from Barcelona, used Gorg Blau as an inspiration for his well-known Mallorcan stained glass window or La Poza Azul. A monumental design from 1911 that is kept in the Museo Nacional d’Art de Catalunya. It is divided into three parts and represents an environment worthy of Eden, in line with what was perceived of the enclave at that time. Another work of art generated by the gorge was the poem Gorg Blau by Miquel Costa i Llobera. The creator of Pollença, who was born in 1854 and died in 1922 in Palma, dedicated several verses to describing the place. 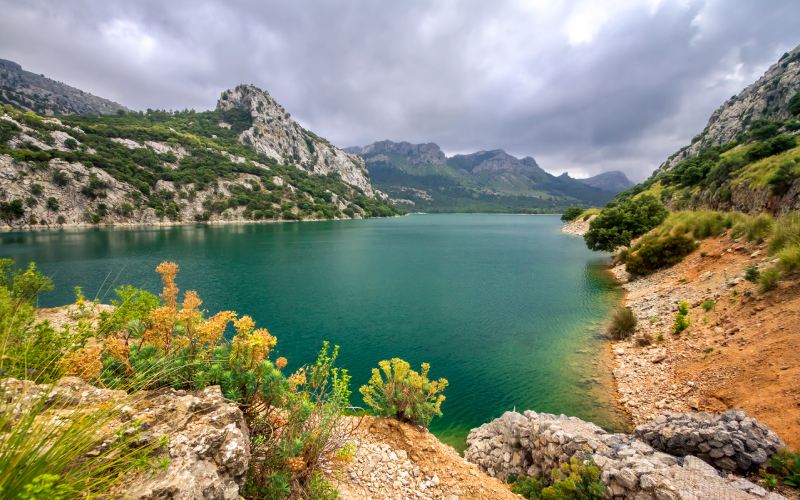 Gorg Blau from its shore. | Shutterstock

All of this makes it clear why it was so controversial to sacrifice much of the Gorg Blau stream in the 1970s. In addition to all this, on the eastern side there is the Talayotic site, a prehistoric Mallorcan culture, of Almallutx. Part of it is still exposed but another one was left underwater. Therefore, although the beauty of the Poza Azul is evident today, it seems that in the past it was much more beautiful.. 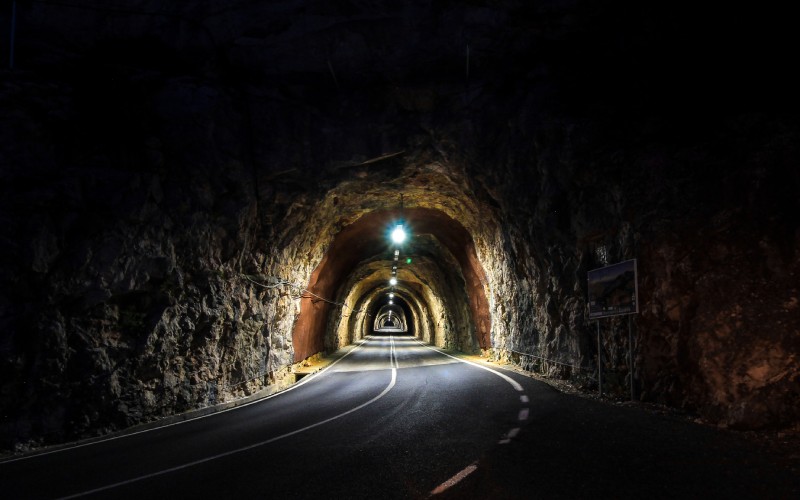 As already mentioned, access by road is easy. In addition to being able to park well, there are trails around the artificial lake that allow you to go around it. Although not signposted, they are not too difficult to get around with the help of a mobile GPS. There are simple hiking options, which stay on the edges of it and allow you to discover the site of Almallutx. Remains of a couple of separate sanctuaries and two talayots, small watchtowers, are what can be seen, always with the necessary respect that such a visit requires. 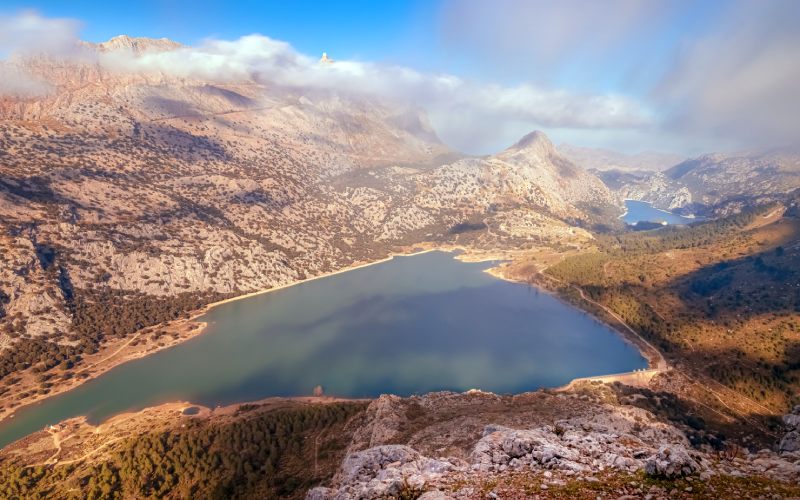 It is also possible to make the hike longer, at a medium level rather than easier, and to ascend the Coll de la Massanella. In this case it is advisable to prepare the route better, which also allows BMX variants. It may also be enough to enjoy the viewpoints accessible by car. For its part, the Cúber reservoir also leaves very beautiful panoramic views. It is worth mentioning that both reservoirs have mountain refuges. Completing the day is easy, as Sóller, Inca or Lluc are just a few steps away by car. Another alternative is to visit the nearby coves on the northwest side of the island of Mallorca.