Gorges are one of the most attractive geographical elements you can imagine. Vertical spaces that give rise to such attractive routes as the Barranco de la Hoz in Guadalajara or the Cares Route between Asturias and León. The Congost de Mont-Rebei gorge is quite similar to the latter. Both share a route by the abyss, but the advantage of the Congost is that it links up with the spectacular Montfalcó footbridges. A border location between Huesca and Lleida that any nature, hiking or climbing enthusiast will find wonderful. 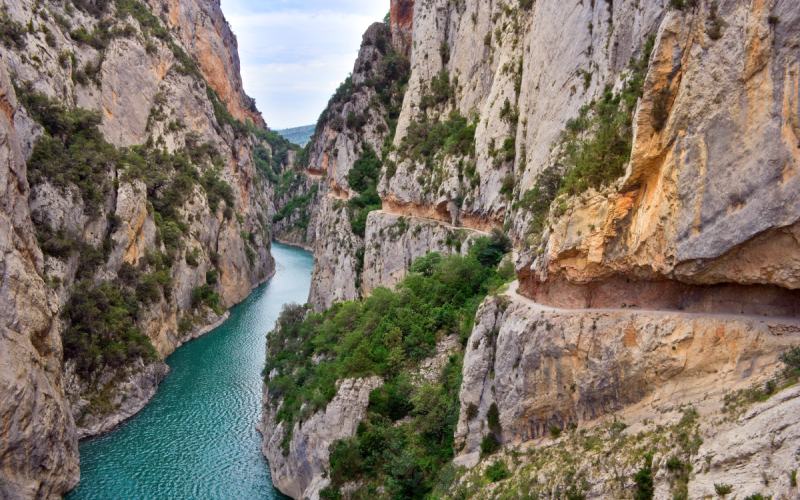 A route between border heights

The river Noguera Ribagorzana is responsible for having generated the Congost de Mont-Rebei. The erosion gave rise to a step of about two kilometers really overwhelming. Heading north-south, the side walls rise directly to the sky, sometimes up to 500 metres. In addition, the width is reduced at some points to just a couple of tens of meters. All this in an environment that is not exploited by railways or roads. Thanks to this, it can boast of being one of the few practically virgin gorges in this area of Spain. 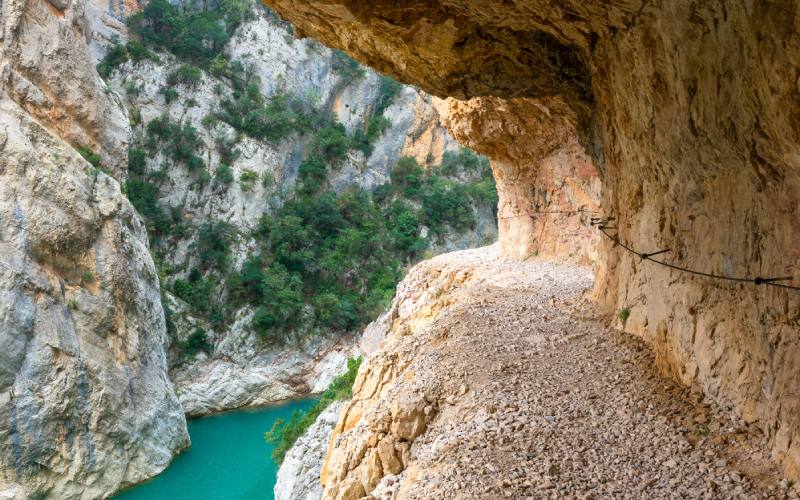 This barrier is one of the most interesting points of the Aragonese and Catalan Pre-Pyrenees. A great complement to the great massifs and beautiful villages waiting in the north. As in the Cares, there are sections directly carved out of the rock. The first steps in the area date from the beginning of the 20th century. However, it was not until the middle of the century that the predecessors of the current path were created. It had to be reconstructed and adapted later to adjust to the evolution of the Canelles reservoir, which is in this segment of the Noguera Ribagorzana. 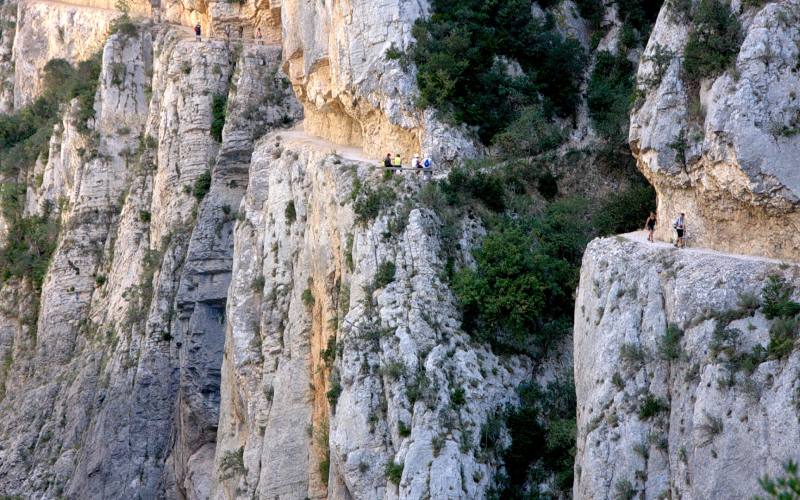 The Montsec Range is the block of which the gorge is a part. Its northern part is wider, while in the south it is when it narrows to the limit, leaving a short rest before contracting again when it meets in the river the end of the Congost del Seguer. From this point onwards, most of the complementary attractions of Mont-Rebei await. It can be crossed either by canoe or by a hiking route.

It is worth noting the abundance of birds of prey in the area, including eagles and bearded vultures. An addition that increases the value of the gorge, which is a protected area. Therefore, although there are many places to climb, during the breeding season this sport is quite limited. One of the most outstanding places to access through this practice is the Colomera cave. It is only possible to reach its mouth, but it leaves impressive views. It is not very difficult, but neither is it suitable for those who have vertigo. In that sense, it reminds us of the Caminito del Rey in Málaga. 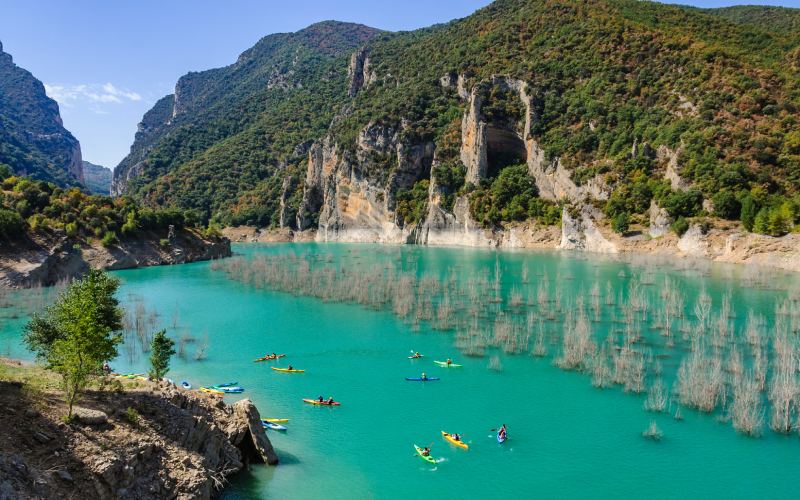 The connection with the Congost del Seguer and Montfalcó

The Congost de Mont-Rebei is crossed on its western side, the one corresponding to Lleida, on foot. However, near its southern end there is the possibility of crossing over to the Huesca side. This means linking with the famous route of the Montfalcó footbridges. The name comes from the nearby uninhabited area, whose territory became part of the state in the 1960s. It is not the only abandoned place in the vicinity, Fet or Finestra are other examples that can also be reached. 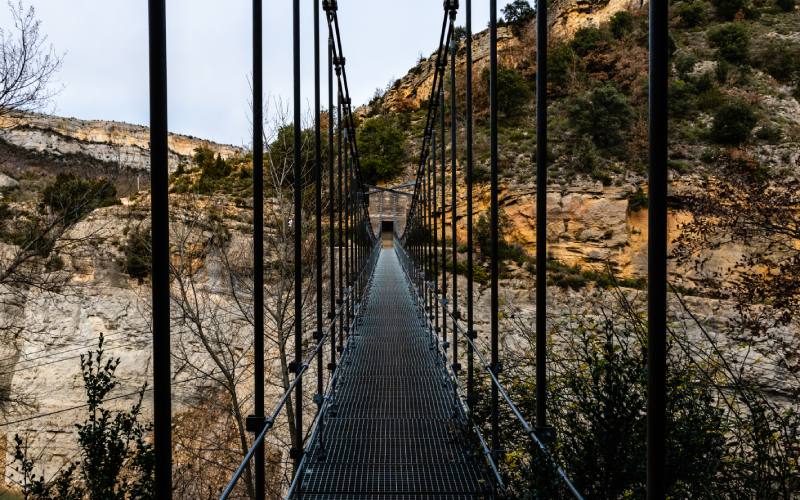 To change province, you must cross a suspension bridge that is impressive at the height of the Congost del Seguer. Pont del Seguer is one of the main attractions of the area with 35 metres long. Next are the footbridges themselves, recent, which descend in an amazing zigzag. This meant occupying a good climbing area, but the result makes it accessible to everyone.

Next to the Canelles reservoir the Montfalcó Nature Trail follows the uninhabited area that gives it its name. Full of viewpoints, vegetation and birds, you can observe the “requiebros” that characterize the local movement of the Nogueira Ribagorzana. Another constant of the route from Mont-Rebei to the footbridges and its later paths is the appearance of ravines perpendicular to the river, like the one of the Seguer. Near the start of the gorge that this article is about there is for example the Barrac Fondo and another suspension bridge, which this time links to several usual starting points.

Monuments around the Congost de Mont-Rebei

Not all the attractions of the Congost de Mont-Rebei are natural. Besides the interesting uninhabited Huesca sites mentioned above there are several hermitages and fortifications to pay attention to. On the side of Huesca, the tower of Chiriveta stands out. This is a classic cylindrical tower, a medieval stronghold dating back to 1070. From the hill on which it stands it controls the northern entrance to the gorge. It came under Templar rule after being ceded by the Crown of Aragon. 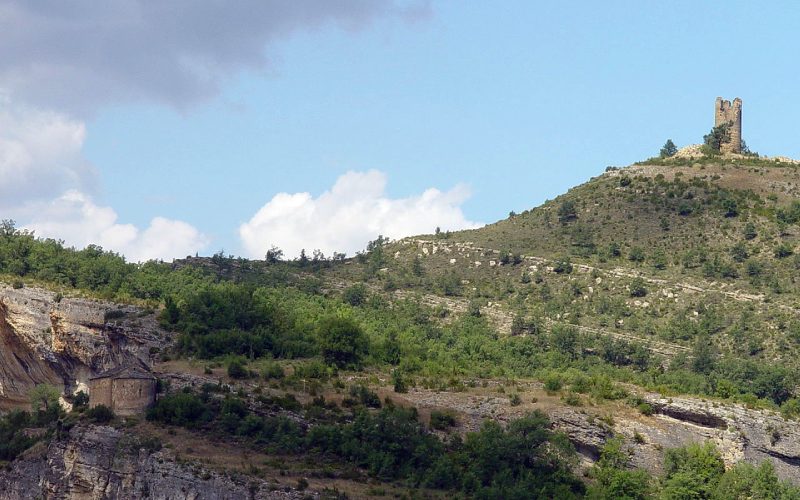 Very close to it stands out, next to the reservoir today and to the river in the past, Nuestra Señora del Congost. This small church belongs, like the tower, to the municipality of Viacamp and Litera. It is Romanesque and also from 1070, although with additions and reforms from the 13th century. Its simple floor plan is located next to a cliff and forms a beautiful picture next to Chiriveta. Both can only be reached by a simple path, walking a little over half an hour. 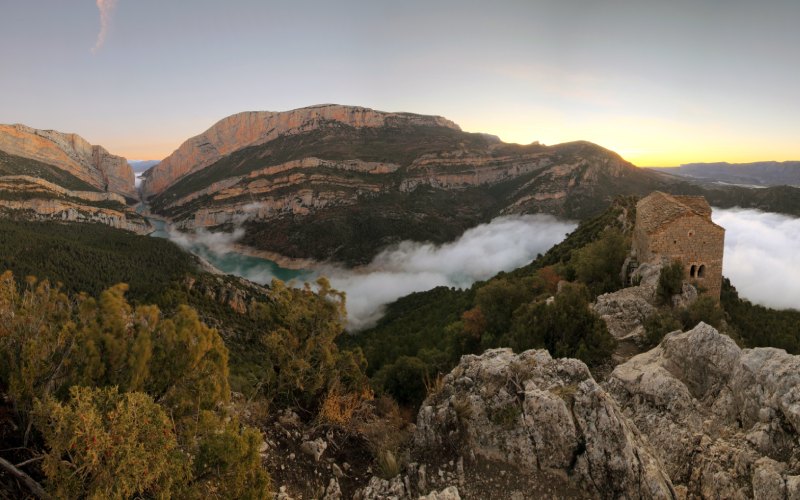 Hermitage of Santa Quiteria and San Bonifacio near Montfalcó and Mont-Rebei. | Shutterstock

Already in the extreme south, not far from the hostel of Montfalcó, is the chapel of Santa Quiteria and San Bonifacio. From the 11th century, it has a situation that is hard to believe, hanging almost vertically on one of its facades. It was raised to adapt to its difficult situation and during the 1990s it was renovated. It was then that it lost its frescoes. The views from here are some of the best, leaving panoramic views of Mont-Rebei and the course that follows. 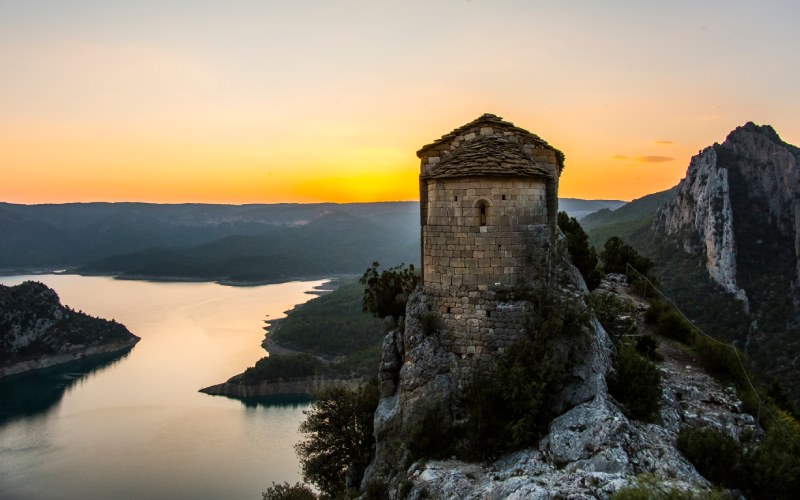 Pertusa next to Mont-Rebei. | Shutterstock

Meanwhile, on the Catalan side, the hermitage of Mare de Déu de la Pertusa shines. Again, it is amazing to think how it was built on top of a steep rock. It is in front of Santa Quiteria and both make a spectacular duo. From the 12th century, reaching it also requires a walk but it is worth it. It is fortified and is believed to have functioned as a small medieval castle.

Routes through the Congost de Mont-Rebei

All of the above makes it clear that there is no single way to tour the Congost de Mont-Rebei. Even if it is not very long, getting there is the first issue. One way is to go to the Montfalcó hostel and link the gorge road with the footbridges. It is about 14 kilometres back and forth to the Barrac Fondo bridge.

Meanwhile, if you only go to the Pont del Seguer, at the entrance to the Congost, it is about seven. On both occasions you can see the hermitage of Santa Quiteria and San Bonifacio. Another alternative from Montfalcó is to turn south after the Congost del Seguer to go to La Pertusa. It would be 16 kilometres in total and you would enjoy the two hanging hermitages. 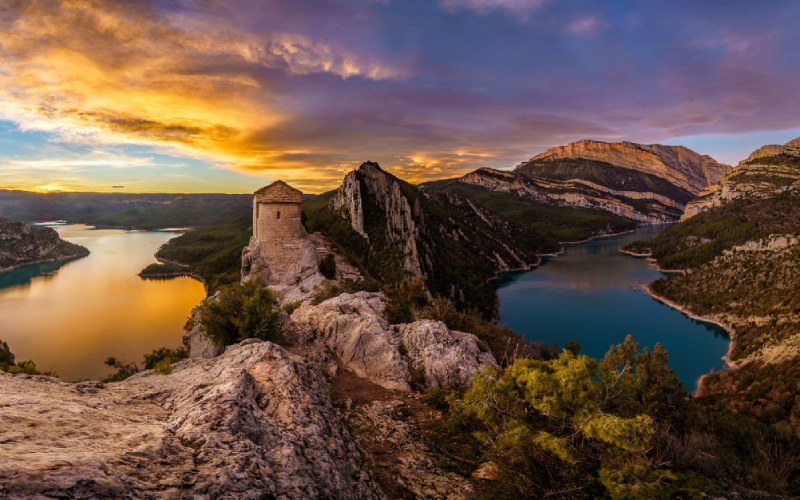 Pertusa with Mont-Rebei on the right. | Shutterstock

If you start from the opposite end, the north, the most usual is to start at the parking of the Masieta. From here you simply have to follow the GR-1, a route marked with two horizontal bars, white and red. This follows the path of the Congost de Mont-Rebei. It is about 17 kilometres to Montfalcó and back. You can opt for and to the Pertusa, which leaves some similar guaranties.

If you prefer active tourism, either in Lleida or in Huesca, you can always do the route by canoe. In this way, the ideal is to use a weekend to visit this hidden corner of the Montsec. One day is dedicated to sailing and another to retracing the route.