The Village that Became a Kingdom

Artajona is one of the best kept medieval communities of Navarra. Here, you can breathe in the atmosphere of a village that came to be its own kingodm and whose inhabitants are known for their bravery.

Planning Your Trip to Artajona

This area has a rich artistic heritage, and it is one of the best preserved and most emblematic walled villages in Navarra. It was constructed in the 11th century. You can’t go there without seeing the Iglesia de San Saturnino, the Basílica de Nuestra Señora de Jerusalén, and if you visit coincides with one of the festivals of the area, you can witness the ringing of the Roman bells. Since it is a small town, you can see the whole thing in a morning. To make an entire day out of your trip, you can travel to the Dólmenes del Portillo de Enériz and the Mina de Farangortea, which are only four km outside the village. And if you still have time to spare, you can use the following day to visit the patrimonial treasures of Olite, or you can explore the Puente de la Reina to the north, or you can even go into Pamplona. Also remember to check out our articles Eating and Staying in Artajona to find out where the best hotels and restaurants are.

The extraordinary dolmens of the Portillo de Enériz and the Mina de Farangortea prove that people lived in this region before the Bronze Age. It was also inhabited during the Roman Era, but it was abandoned after the first century A.D.

But the history of Artajona did not properly begin until the 11th century, resulting from multiple fights among clerics. In 1070, Sancho Garcés IV of Peñalén, the king of Pamplona, gifted the region to the nobleman García Aznárez as a form of payment for his services, which in turn ceded the Iglesia de Santa María to the Monasterio de San Juan de la Peña. In 1804, the bishop of Pamplona, the Frenchman Pedro de Rodez, commissioned to repopulate the area and build a church for the clergy of the monastery of Saint Sernin de Toulouse. The new priory was granted land surrounding the region and the right to collect tithings from the inhabitants, which was bad news for the priests of the neighboring temple of Santa María. This situation triggered lawsuits with the monks of San Juan de la Peña. It was the French who finally won, and in 1126, they consecrated the church/fortress to San Saturnino. The construction additionally came to reinforce the imposing ramparts built around 1085, known as “El Cerco.”

This community, with its extensive land holdings, even became its own kingdom for a time. In 1144, the king García Ramírez of Pamplona married Doña Urraca la Asturiana, the illegitimate daughter of the king Alfonso VII of León, who gave him Artajona and its surrounding lands (including Olite, Miranda de Arga, Cabror, and Arga) as part of her dowry. García Ramírez died seven years later, and he was succeeded by his widow and her half-brother, Sancho III of Castilla. The mere existence of a foreign kingdom in the middle of his territories threatened the new king, Sancho the Wise, of Navarra, so he and his army attacked in 1156. The garrison resisted, but two years later, after much negotiation, Artajona was reincorporated into the kingdom of Navarra.

During the Guerras de Bandos in the 15th century, the inhabitants conscripted to the Argamontés side, enduring three attacks at the hands of the Count of Lerín, the head of the Beamonteses, their enemies. Finally, at the beginning of the 16th century, it was given to this family, whose allegiance to the Castillians is represented by its walls.

Artejona did not suffer any significant damage during the wars in the 19th and 20th centuries, although the locals would become famous during the civil war, on September 13th, 1936, with the program “Los Cuarenta de Artajona” (which comprised the third company of the Tercio de Lácar). Before mounting the attack on San Sebastián, captain Ignacio Ureta Zabala, at the head of a Carlist military group, marched through the gates of Artajona, much to the surprise of its residents. Only one person was injured. He was caught in the revolving door to the building of the Diputación de Guipúzcoa.

Interestingly enough, the 1976 film Robin and Marian, starring Sean Connery and Audrey Hepburn, was filmed in Artajona. Upon arriving in the town, the director said “there is no better place in Spain than this to reflect the atmosphere of the Middle Ages.”

Things To Do In Artajona

Artajona is one of the best-preserved walled towns in all of Navarra. The profile of its walks and its battlements is representative of its rich artistic patrimony, which extends to its medieval town. It has cobbled streets filled with stately buildings that rise as high as their defensive walls (El Cerco) allow. Built in 1805 (although the current set was built earlier, probably in the 13th or 14th centuries), El Cero shelters the first city of the 11th century. It included nine battlements, in perfect condition, and two doors through which you can enter, also from medieval times. There exists in Artajona a legend that claims wine was used in its construction instead of water.

San Saturnino Church is another structure that forms part of Artajona’s skyline. Its building was erected in the 13th century over the site of a former Romanesque temple, and it was built to be a fortress; there was a prison in its towers, and you had to cross a drawbridge to get to its highest parts. Its western side is the only one that does not comply with the defensive style. Distinguished by its arched entrance and the gallery that is arranged on both sides, initially designed to contain images of the apostles. The painted Gothic walls that are preserved inside are also particularly interesting. They are archaic and inspired by the Roman Byzantine style, and they were built toward the 1300s by the “Master of Artajona.” 40 years later, he added a frieze dedicated to San Saturnino in the presbytery. The walls of the Juicio Final and those of the Apostles, previously in the main altar, are now kept in the Museo de Navarra. 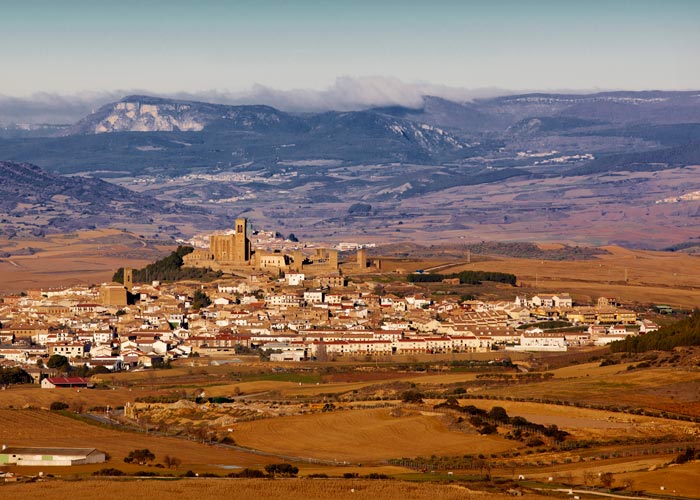 Downhill, outside the walls, we find the San Pedro Church, a Gothic building from the 13th century, whose interior was renovated in the Neoclassical style during the 19th century. Inside the church stands its main altarpiece with a great many colorful sculptures. The Basílica de Nuestro Señora de Jerusalén, from the 18th century, houses a famous Romanesque carving of the Virgen de Jerusalén, clad with enameled copper. Legend has it that it was brought to Artajona from the Holy Land by a crusader native to the village.

Another one of the patrimonial attractions that you have to visit in Artajona are the four bells that are preserved here; two of them are Roman. You can see them ring, but only on special occasions. They are said to be the only bells in the world that are banded backwards.

Four kilometers from the city (by the NA-6020 road), you will encounter, high in the Dólmenes del Portillo de Enériz, and 800 meters away from these, the Mina de Farangortea. The first part has two well defined sections: the burial chamber with a corridor. The mine follows the same structure but with smaller dimensions. Both graves, the southernmost in the province, are two of the most fascinating examples of Megalithic culture in Navarra.

Navarre
It may interest you...