If there is a building that means Middle Ages, that is the castle. They are representations of an era of hand-to-hand combat and feudalism. Although there were centres of knowledge, such as some of the great Arab capitals or the monasteries, the atmosphere was dominated by a fanatical obscurantism that only humanism would partially weaken centuries later. Such is the context in which the castle of Burgalimar, in Baños de la Encina, was built. It is considered the oldest in Spain and the second oldest in Europe, a true medieval fossil with spectacular conservation. 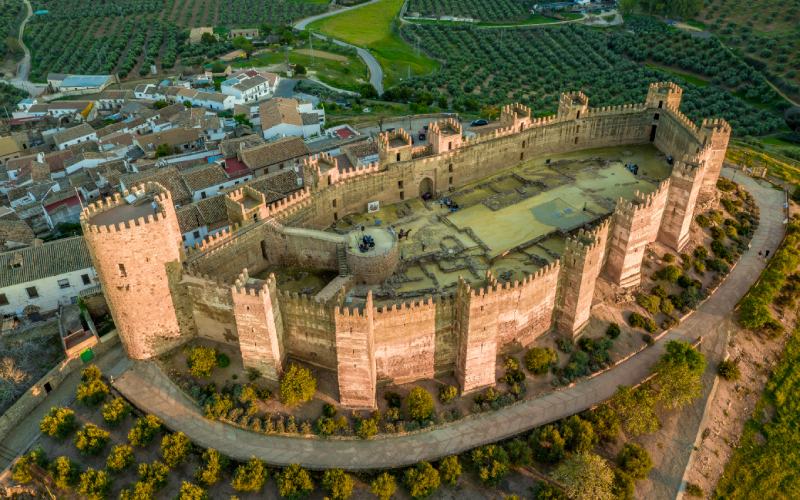 Aerial view of the castle, with its oval floor plan. | Shutterstock

The proven antiquity of Burgalimar Castle

Before the current castle complex was built, the hill on which the Umayyad fortress of Baños de la Encina is located was already occupied. The Copper Age and the Classical Age have left recognisable remains in the archaeological surroundings of Burgalimar Castle. Its first occupation is believed to belong to the culture of El Argar, common in Almería and Jaén. Later it would become an Iberian defensive city and finally a Roman enclave, possibly with a necrology character. In any case, it is not confirmed that it was a place of burial, but the presence of the Mare Nostrum empire is.

However, its importance would increase dramatically in the 10th century. This was the era of the Caliphate of Córdoba, when the Christian kingdoms trembled for decades before the renewed brilliance of the Arabs. An effervescence that quickly diluted leaving corpses as beautiful as Medina Azahara. Be that as it may, one of the most extraordinary facts about Burgalimar is that the exact date of construction is known. A plaque on its door, now in the Archaeological Museum of Madrid, indicates that it was in 967, year 357 of the Hegira. 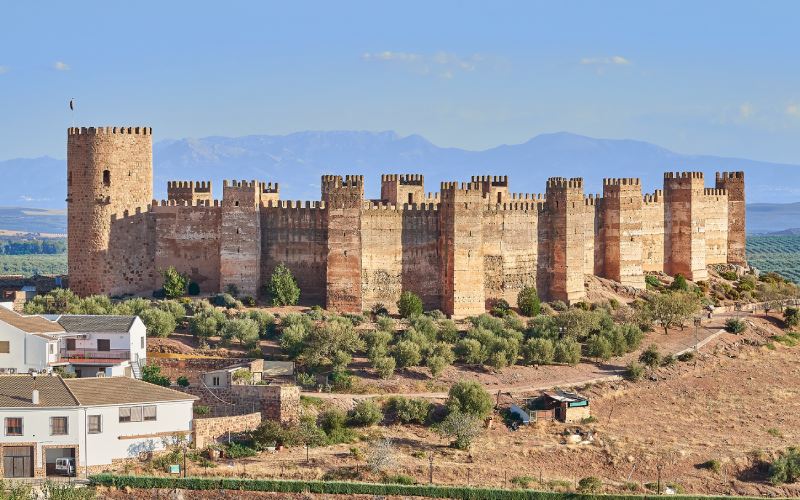 The castle of Burgalimar with its orthogonal towers. | Shutterstock

Thanks to this or the few modifications and damages suffered later, it is considered the second oldest castle in Europe. The EU recognized its millennial character by allowing it to display the Union’s flag. It is a kind of historical miracle that towers and canvases remain standing, still showing the power of the Caliphate. Even if other fortresses were raised before, they have not managed to survive.

A display of Caliphate power in Jaén

The Umayyad Caliphate of Córdoba lasted a century and two years in action. During this time it was able to devastate Castile, León and Navarre, even plundering Santiago de Compostela. It brought to the Christians a feeling that seemed forgotten at the end of the 9th century, the fear beyond the river Duero. Galib and Almanzor were its greatest generals and Abd al-Rahman III its first supreme leader. The second, his son Al-Hakam II, was an enlightened caliph whose delegations in the aforementioned military led to his death in an internal war resolved in Torrevicente, Soria. 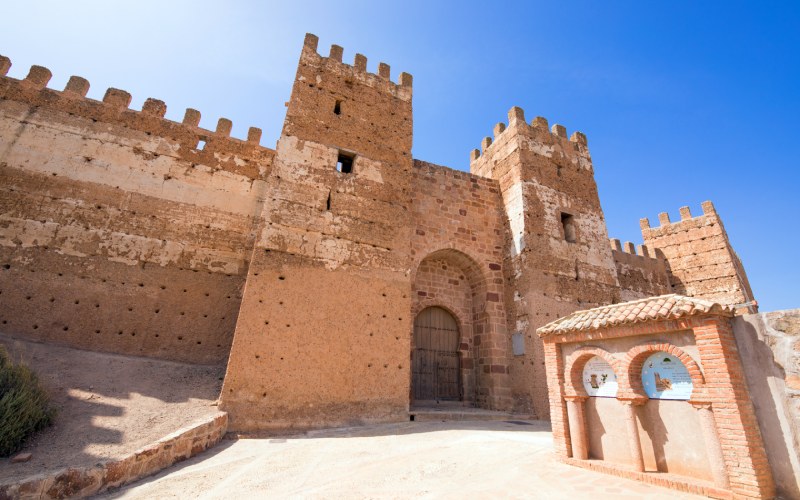 Main door of the castle of Burgalimar. | Shutterstock

The consolidation of the caliphal power of Al-Hakam II led to the creation of several legendary fortresses. Burgalimar was accompanied, for example, by the extension all the way to the castle of Gormaz. It was at this point that much of the attention was focused, as it allowed for a bridgehead across the Duero. However, the leader advised by Galib did not lose sight of the south and raised a series of strong points that came to protect the axis created by Sierra Morena, from Seville to Jaén.

Burgalimar Castle is a perfect example of defensive architecture in a safe area. Elongated and with an oval silhouette from its zenithal level, it is 100 meters long and almost 50 meters wide. Almost square towers guard the entire perimeter. In total there were 15, all the original ones that are seen today plus another one that was adapted as a fortress by the Christians later on. It is believed that at first they were solid, being their Christian owners the ones who gave them “inner life”. 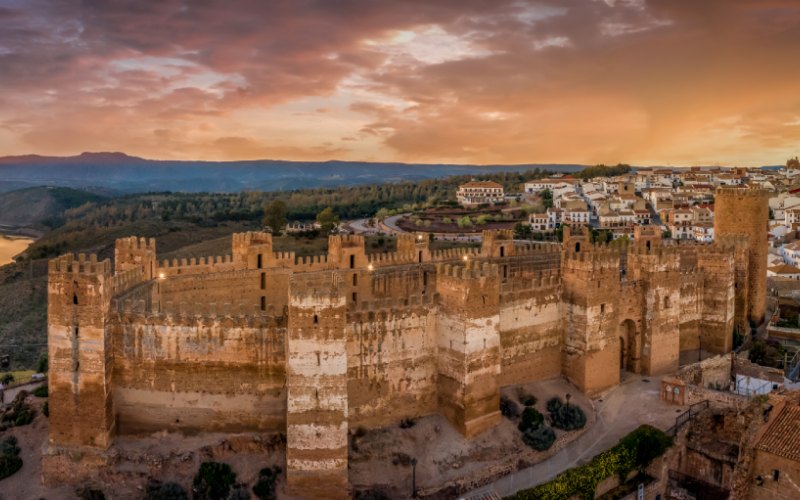 Although it looks like ashlar, powerful, it is actually made of a kind of Arabian adobe, called tapial. Lime was a key element in such a mixture, so much so that robust prisms were generated which, when piled together, created the castle of Burgalimar. A technique adequate for the mission far from the border that marked the fortress at that time. The entrance was through the north and south accesses. The most imposing is the latter, with a caliphal arch and an intricate structure that today appears simplified, but which in the Middle Ages was a hell for any assailant. Inside, the cistern and the remains of the foundations of later buildings stand out. 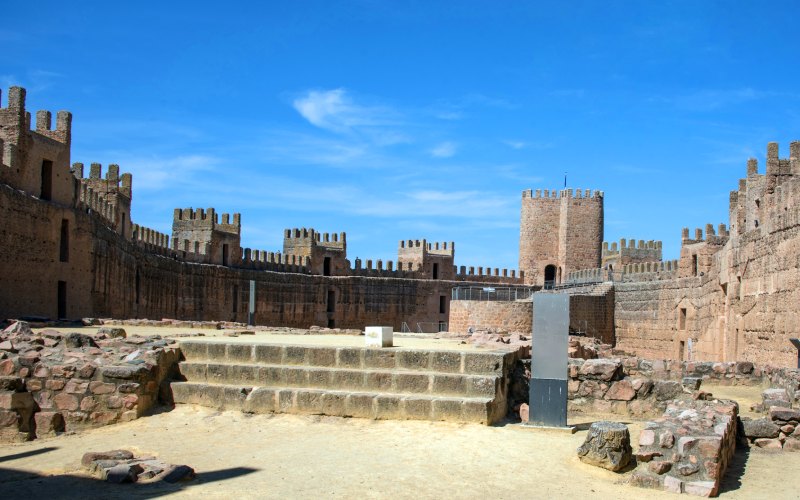 Parade ground of the castle of Burgalimar. | Shutterstock

The Burgalimar Castle journey to the present day

In its early years the fortress served as an ideal stop for armies heading north. Their mission was to cross the Duero through the castle of Gormaz and execute punitive expeditions. The caliphate’s fall from grace and the Almohad invasion changed this. It went on to have defensive functions in the 11th, 12th and 13th centuries. Like many of its peers, it changed hands several times. It was Ferdinand III the Saint, the king who united Castile and León, who took it over definitively in 1225. That was the time when the town to which it belongs today was founded.

DDuring this time the Almohads reinforced it and used strange tricks to make it look stronger. For example, painting it to look like stone. With the Christians came a certain calm. The centuries passed under the orders of the Order of Santiago and several nobles. In the middle of the 15th century the northern end would transform into a powerful homage tower that breaks the homogeneity of the whole. It was added to the strong point inside the elevated enclosure in the 14th century to generate a Christian fortress. 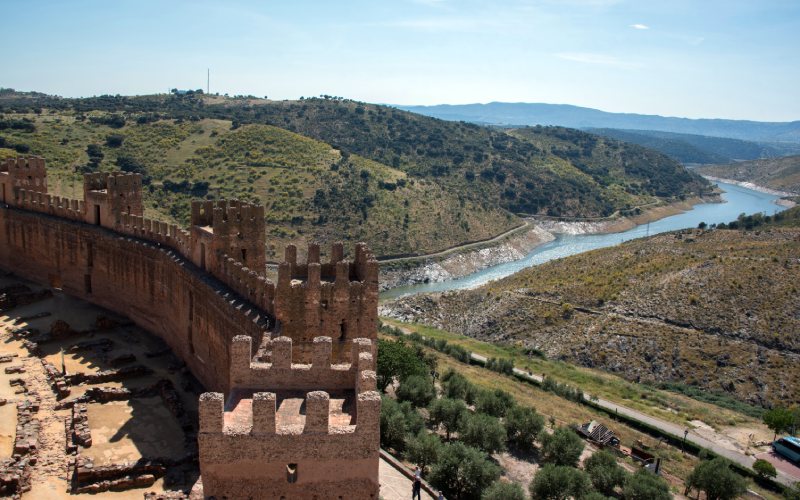 View of the side of the castle of Baños de la Encina that does not face the town. | Shutterstock

Although it was involved in the War of Independence; luck would have it that, as in previous conflicts, it was not damaged. Later, in 1931, it received state protection by being named a National Monument. This figure has since helped to highlight its long history. For example, with the European recognition named at the beginning of the article.

It is currently a landmark of great tourist interest in an area already heavily populated with historical sites. The visits are divided into different schedules, so this is not a problem, and have a guided alternative. Nearby are Bailén, Montoro, Linares, Baeza, Úbeda or Andújar. Precisely the mountain range that shares name with the last town or Despeñaperros are remarkable natural parks nearby.