In the north of Catalonia, kissing the waves of the Mediterranean, there is a fortified wall that protects a beautiful enclave. Tossa de Mar is one of the best known places in Costa Brava and also one of the most charming corners that can be found in the north of Catalonia. This small town has become one of the must-see places of this coast, a place where fun, culture and peace combine to offer an unforgettable holiday or getaway. But what is the history of this small enclave and what are its best coves? 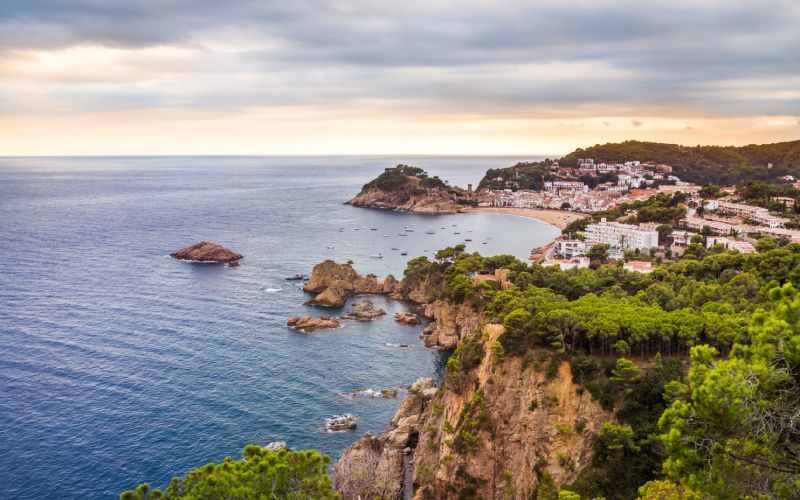 Despite the modern buildings, you can breathe history in Tossa de Mar. | Shutterstock

The population of Tossa de Mar is very old, so much so that since the Neolithic, at least 4,000 years before Christ, it was already inhabited. In fact, some prehistoric remains have been found in this area, such as menhirs (the simplest form of megalithic monuments), dolmens and various stone tools that can be visited in the local museum.

However, the enclave did not begin to have relevance until Roman times, when a settlement was created in a place called Turissia, the name used by the Iberians who inhabited it. From this period there are interesting remains such as the Vila Romana dels Ametllers, the Masía Carbotí and Ses Alzines.

After the fall of the Roman Empire and entering the Middle Ages, Tossa de Mar acquired the appearance that today, centuries later, looks in its old town: cobbled streets, historic houses and monuments of a bygone era, as if time had been frozen. Of course, it is in those years when the imposing castle of Tossa de Mar was built, the one that protects the town from the coast and gives the town a fairytale touch. But, despite its appearance, Tossa de Mar was never a protagonist in the great wars, so it was able to preserve its heritage in perfect condition. For all these reasons, in 1931 this town was declared a National Monument.

Coves and beaches for all tastes 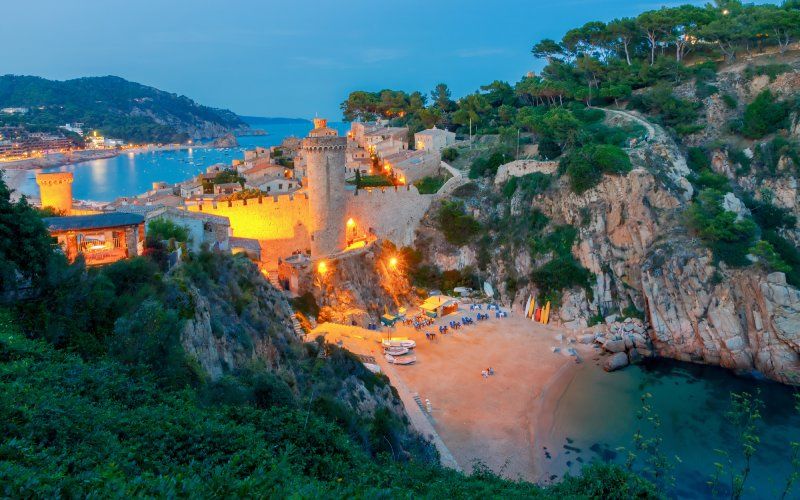 You can enjoy an incredible atmosphere both day and night. | Shutterstock

One of the biggest attractions of Tossa de Mar lies, as already mentioned, in its picturesque coves and beaches, internationally recognized. There are larger and smaller, more crowded and more solitary, so the variety is one of the strengths. The most important of them all is the Gran beach, with a size of 400 meters. It is usually the most crowded, so you have to go early to get a good spot. Fortunately, nearby is also the beach Mar Menuda, smaller in size and without the need to go too far from the town center.

Continuing to the north, several coves hidden among the steep cliffs emerge. The perfect place for privacy and seclusion. The most famous are Giverola, Futadera and Pola coves. But you don’t have to go far to find charming coves, because behind the castle of Tossa de Mar is the Codolar cove. It is much closer and offers a very quiet space without too many crowds.

The castle, a fortress against pirates 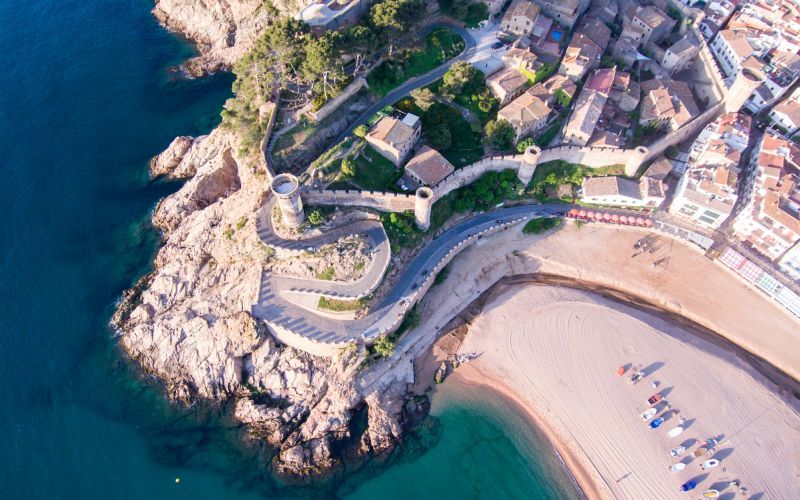 Although only the towers and walls have remained standing, it is a must-see. | Shutterstock

The imposing panoramic view of the towers and the walled enclosure of the castle of Tossa de Mar is one of the most recurring postcards and photographs in this enclave. The castle, dating from the 12th century, had a defensive function, as it served as protection against attacks by Barbary pirates. Built on a hill to the south of the town, it is a symbol of the town. Also, the tour of the fortress is free. In its facilities it is possible to access some viewpoints from which you can see breathtaking views of the beaches. 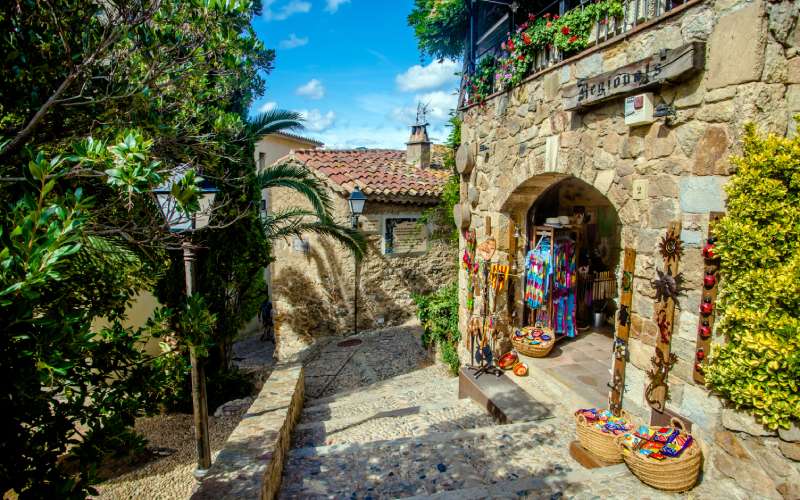 After visiting the castle, the traveler may be left hungry for more, more sightseeing and more history. Luckily, the tour can continue with a visit to Vila Vella. Vila Vella is the name given to the center of Tossa de Mar. It is easily recognized due to its medieval buildings, as well as the incredible walled enclosure that surrounds it completely and that can be visited for free.

Also, the town is even more charming in spring, when the flowers stain the streets with colors. Another emblematic place to stroll through in Tossa de Mar is the Roqueta neighborhood, which borders the Mediterranean Sea. For when the hunger rages, impregnated with the smells of the coast, amazing restaurants will lend themselves to supply the visitor with fresh fish and seafood.

Culture in Tossa de Mar, the village that made Ava Gardner fall in love with it 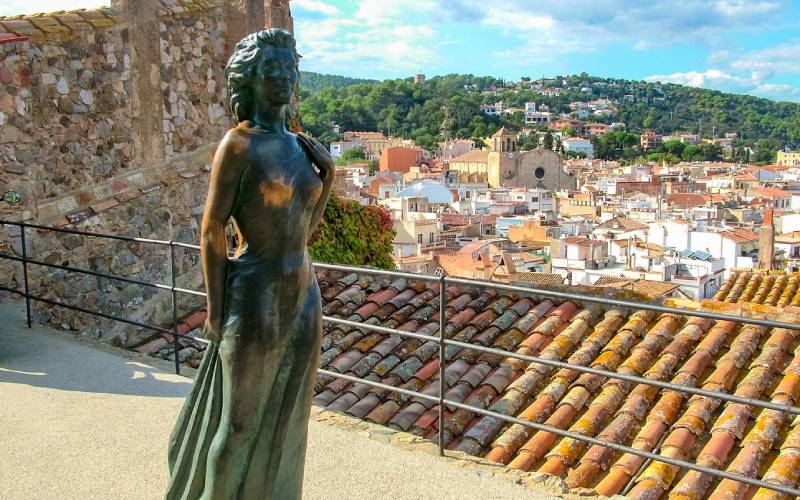 In addition to all the above, in Tossa de Mar you can also enjoy a cultural visit. The Roman villa of Els Ametllers is, without a doubt, the right place for this. Located in the Turó de Sant Magí and built in the 1st century BC, some of its constructions are very well preserved, such as the thermal area and the mosaics that decorated the floors of the houses.

But it is in the Municipal Museum of Tossa de Mar where you can enjoy even more detailed history: archaeological sites, Roman coins and many more items of interest. Also, and depending on the time of the year, it is possible to contemplate here works of different European artists, since it is the first contemporary museum in Spain.

As a curiosity, Tossa de Mar has been an inspiration for many artists, including some of the big screen. This is the case of the renowned actress Ava Gardner, since one of her films was shot in this town in Girona. Gardner was, in fact, completely in love with the village. It is for this reason that a sculpture of the artist can be found in its recognition. The surprises and wonders of Tossa de Mar never cease to amaze.