Roman Theater of Mérida is a wonder from a visual perspective, because of the dimension of its shades, the sculptures that seem to hide from visitors among the columns, and the impressive wall that decides the end of the building. It is also amazing from a historic point of view, because having more than 2000 years of antiquity and having struggled with the total abandonment, it still resists. It is stunning from a functional point of view as well, because not only stands in one piece, but also achieves the goal for which it was built: to host cultural events.

Roman Theatre of Mérida is still that, after 2000 years after its building: a theatre. And it has become the prince of Mérida’s sights as well, as José Menéndez-Pidal y Álvarez named it, architect and archeologist in charge of its main renovation in the decade of 1960 and 1970. For that, we know for sure that himself was in wonder. 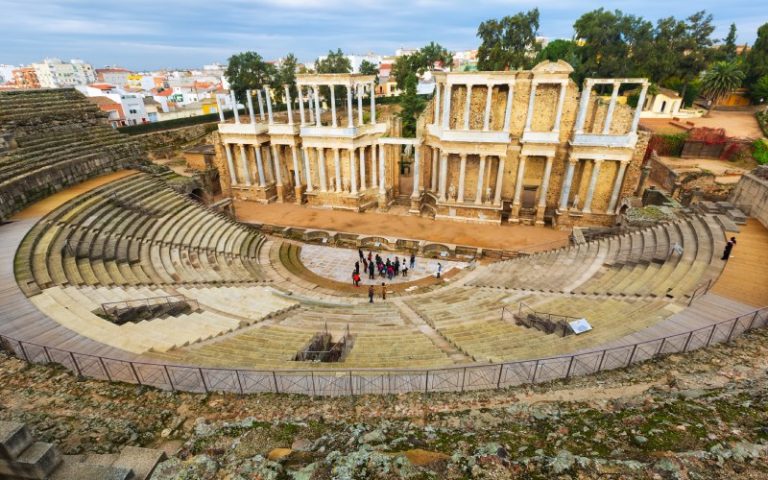 Let’s make things clear, Romans weren’t particularly fans of theater. Most of them preferred by far the passion they found in the battles of gladiators and which they let flourish, or the adrenaline they experienced with the carriage races. They wanted excitement and theater was more calmed. It didn’t match with their savage personality, but there were some lovers of Greece and its arts. People like Scipio Africanus, for example, who defeated Anibal and promoted the theater affection.

That is why, some centuries later, all good Empire’s population must have a proper theater, for appearance and politics. The colony from Emerita Augusta, head of the Via de la Plata, couldn’t be less. For that reason, under the reign of Agrippa, between years 16 and 15 B.C., when the colony was known as the capital of Lusitania’s province, this building was raised.

Therefore, Emerita Augusta knew how to join the population’s interests with the leaders’ ones. To this monument, intended for those who looked for a greek inspired entertainment, the Romans added an impressive collection of public buildings along the way. Some of them are the Roman Amphitheater, a circus, a Roman bridge over the Guadiana river, the aqueduct of Los Milagros or the Templo de Diana. All together in one place, a wonder indeed. 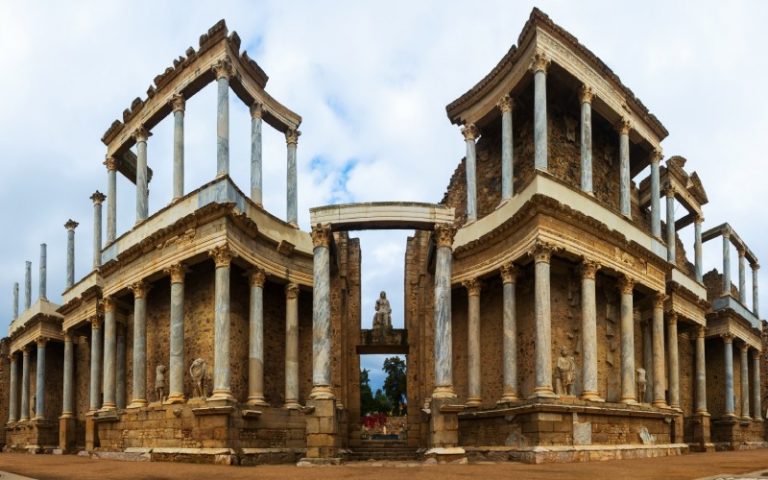 Here, Romans showed once again, their compromise with monumental architecture. They also showed their duty with the cheapening of production costs. That is why it was partially built above a hillside, as well as many other structures built under this Empire.

The amazing Roman Theater of Mérida was built with the purpose of giving space to almost 6000 spectators. If we compare it with the number of people the Amphitheater of Tarragona could host, 14,000, it seems just a tiny amount, but we have to keep in mind the priorities of the town. Then it was impressive that several thousands of spectators could enjoy performances of classical masterpieces in a society that give little weight to this kind of events. In other words, it was quite impressive. The size of this theatre supports our strong belief that this is for sure a wonder of the Ancient Spain.

Its sight is made up for a platform raised above the level of the orchestra, which has already thirty meters of diameter. Overall, this platform has sixty meters wide and seven meters deep. To finish, a thirty-meter wall satisfies the huge shock that is watching this historic place. This wall is divided in two groups of columns that hide surprises as well, like gods’ statues from the Roman world and several emperors, some of them beheaded. The statues, not the emperors. They seem to watch everything that happens very carefully. If you have the chance to come closer to them, you will see details that time haven’t had the opportunity to erase. 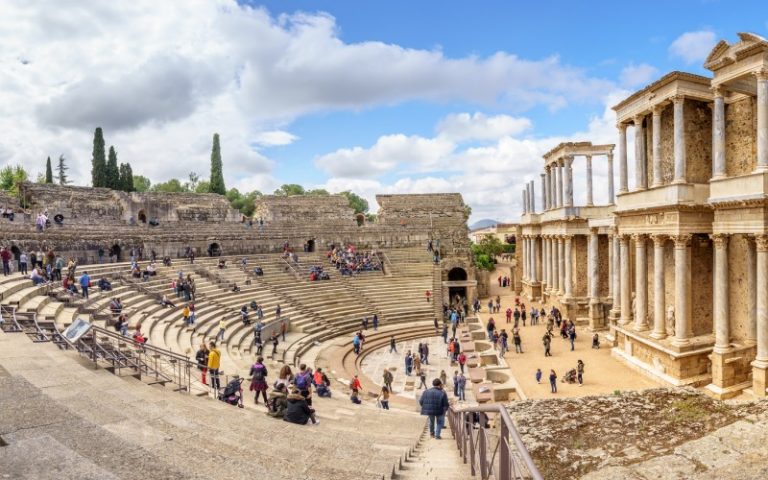 Maybe the most surprising thing this place has is what we have talked about before: the fact that it still does the job for which it was built more than 2000 years ago. Especially knowing that it was abandoned, buried and forgotten for centuries. A complete stranger for the inhabitants that lived in this place, at least until last century.

Although it was renovated several times immediately after its building, the most important aspect of its evolution was right that it stopped evolving. When Christianism dictated that the legal representation was something very immoral, back in the 4th century, the Roman theater closed its doors and the inhabitants turned their back. People, along with nature, buried the stands and used its land for agriculture. The Roman theater was used as support for the food production.

The only thing that remained in view was the upper stand It almost seems as it never finished trying to make its way through the land. That same people that didn’t know where their potatoes were grown, were aware that something stuck out from it, something with the shape of really big chairs. That is why these ruins were known as the Siete Sillas (seven chairs) since then. It wasn’t until the beginning of the 20th century when the excavations started, and here they found… Well, a bunch more of chairs.

The theater appeared little by little. The main archeologist, responsible for the first works in this place, was José Ramón Mélida. José Menéndez-Pidal y Álvarez kept doing this job in the middle of the 20th century, although in 1993 the theater came back as a spectacle to this impressive scenario. He did it with Margarita Xirgu, who was determined to give Caesar, the theater, what it’s Caesar’s, the theater. It was the beginning of the International Festival of the Classical Theater of Mérida. By the year 1953, after 19 years of pause, it was strengthened.

This prince of Mérida’s sights is a historic gem that has survived not only time, but also the harshest abandonment. The cruelest one: obliviousness, ignorance. For a long time, it remained hidden underground. Even though, when it appeared, it did it with its own light. That is why it is a World Heritage Site since 1993, the year in which it got back the purpose for which it was built. Also, with a kinder audience that has let gladiators’ fights apart. That audience wants to see theater, and enjoy it seated in those old stands in which Romans used to sit. Along with the statues watching all that happens in scene, it is a stunning experience.