The Sistine Chapel of Cave Art

Altamira is found on one of the hills of the valley near Santillana del Mar. The collection of paintings in the cave, created around 15,000 years ago, is considered the culmination of cave art.

Plan your visit to Altamira Caves

The main cave of the Altamira Caves was discovered in 1868 by a hunter, Modesto Cubillas, while he was trying to free his dog which had gotten trapped between some rocks nearby. At that time, nobody could imagine the relevance of the discovery, given that it is located in a karst landscape characterized by an abundance of caves and grottos.

In 1875, this discovery reached the ears of Marcelino Sanz de Sautuola, a well-known paleontologist and the owner of the farm where Cubillas worked. The paleontologist went through the entire cave, which allowed him to recognize some abstract markings, such as repeated black lines, to which he paid little mind as he did not think they were manmade works. Four years later in the summer of 1879, Don Marcelino returned to Altamira a second time, this time accompanied by his nine-year-old daughter María. Taking advantage of the fact that her father was preoccupied, María made her way into the gallery until arriving in a lateral room. There the girl saw some paintings on the ceiling and ran to tell her father, who was surprised to see the grandiose collection of strange animals that covered nearly the entire ceiling. 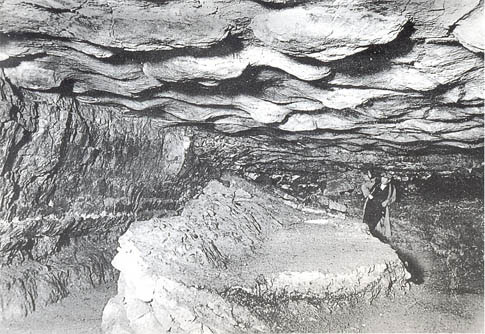 Finally, in 1902, the value of the Altamira Caves and its paintings was recognized. This was due to the fact that in the two preceding decades, Paleolithic sites and materials had been discovered that had symbols similar to those found in Altamira, so it no longer made sense to deny their authenticity. Even Émile Cartailhac, one of the biggest opponents of the authenticity of Altamira, had to recognize his error in writing in an article titled “The Caverns Adorned with Drawings. The Cave of Altamira, Spain. My Fault for Being Skeptical” (published in L’Anthropologie in 1902).

In 1985, the Altamira Caves were recognized as a UNESCO World Heritage Site.

What to see in Altamira Caves

Since its discovery over a century ago, the cave has been continuously investigated. It should be noted that it is one of the sites where the most carbon-14 dating has been done. Thanks to these studies, authors such as the renowned pre-historian André Leroi-Gourhan have proposed a timeframe for the creation of the paintings that dates back to between 15000 and 12000 B.C. To confirm these theories, Altamira has been included in one of the most modern projects that is currently being worked on, based on the dating of stalagmites. However, some of the graphic representations have been traced back to sometime around 30000 B.C. A critical period of paintings around 14000 B.C. has also been indicated, so it is possible that the cave functioned as a reference over the millennia for all the inhabitants of the area.

The Altamira Caves are 300 meters long and more than 150 depictions are found in the three main sections, which are connected to each other: the Great Room (the Great Ceiling or the Room of the Frescoes), the Well Room, and the Room of the Horse’s Tail.

The best-known elements of Altamira are found on the decorative ceiling of the Great Panel. This collection is especially relevant, since it demonstrates an impressive development from a technical and artistic standpoint. It is known that the floor of the room with the paintings used to be at a much higher level than it currently is; that is, the wall was raised at least two meters off the floor. The creation of the paintings and their global vision suppose an important technical challenge and an exceptional knowledge of the laws of perspective.

In Altamira, there are a total of 16 examples of bison of different sizes, depicted in different poses and created using several pictorial techniques. The bison appear alongside horses, deer, and tectiform symbols. Despite their age, these depictions cannot be qualified as archaic. The sense of realism is notable because the painters took advantage of the natural bulges of the rocks. This technique, very common in cave art, creates the illusion of volume and alongside the brightness of the colors that fill the interior surfaces (red, black, yellow, brown) and the engravings, it creates an impressive pictorial naturalism for current visitors. 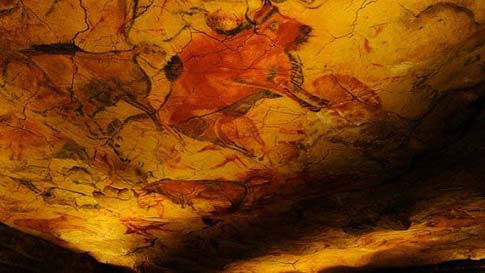 The images immortalized on the walls of the Altamira Cave allow pre-historians to analyze various fundamental aspects of the societies of the more remote past. Some authors use this reference as a starting point to study the fauna of the time, comparing it with other European and peninsular cave art, such as that of Tito Bustillo in Ribadesella, Asturias, or los Casares, Guadalajara. Others think it is possible to come to understand and figure out the symbology of these towns, even their ways of thinking and socializing.

Altamira was closed in 1977, so it is not currently possible to visit the cave, given that the traffic of visitors would pose a danger to the microclimate and the conservation of the paintings, but a small section for investigators was maintained.

Since 2001, next to the cave has stood the National Museum and Investigation Center of Altamira, a work by the artist Juan Navarro Baldeweg in response to the popularity of the site. The Altamira Museum is a complete museum installation in which you can not only visit a reproduction of the cave, but it is also possible to see a permanent exhibit with some of the best Paleolithic materials in Europe. Likewise, access to the knowledge of this period is guaranteed thanks to the enormous number of interactive panels and visual and written guides at visitors’ disposal.

Inside the museum is found what is known as the Altamira Neo-cave, the most accurate reproduction of the original that exists. The Great Ceiling of the cave can be admired by visitors without endangering its conservation, thanks to the recreation made by Pedro Saura and Matilde Múzquiz (Professor of Photography and Drawing at the Fine Arts School of the Complutense University of Madrid). This reproduction was able to imitate the same drawing, engraving, and painting techniques used by the Paleolithic artists. Their attention to detail and dedication were so great that during the study of the original, new paintings and engravings were discovered.

A Journey through Santander: from Cabo Mayor to Centro Botín
Santander is a city with more than enough reasons to be visited. Welcoming, modern, cosmopolitan Más información

Cave of El Soplao, the ancient mine that turned out to be a geological treasure
The cave of El Soplao is located in the municipalities of Herrerías, Valdáliga and Rionansa, Más información

Cable car of Fuente Dé, the most vertiginous ascent of Picos de Europa
The location of Fuente Dé makes it one of the most isolated mountain villages in Más información