The arrival of spring and the first signs of good weather awaken interest in discovering new places in Spain. Its architectural beauty and dreamlike landscapes are its most important attractions. But, in addition, the Mediterranean country presents wonderful contrasts: beautiful narrow streets in medieval villages and imposing avenues in modern cities. Some of these streets are the most beautiful of Spain. 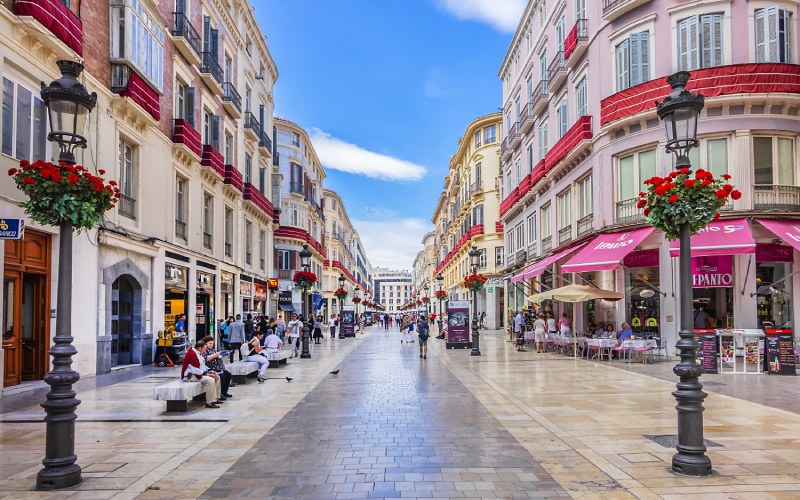 Inaugurated in 1891, Marqués de Larios Street is considered the most elegant street of the 19th century. It stands out for the curved design of the corners of the buildings, which resembles the architecture of the city of Chicago. Historians attribute this influence to the cultural exchange that historically took place in the port of Málaga. Besides, this street enjoys an incredible aesthetic perfection. There is a point towards the end where the lines of all the cornices and balconies come together.

This is the most famous street in Málaga, since it the purest representation of elegance. But apart from being a place to walk, in it are located many clothing stores, cosmetics and decoration. Every September, the “Pasarela Larios Malaga Fashion Week” takes place. In August, on the other hand, the pedestrian street is filled with artisans to celebrate the “Feria de día”. 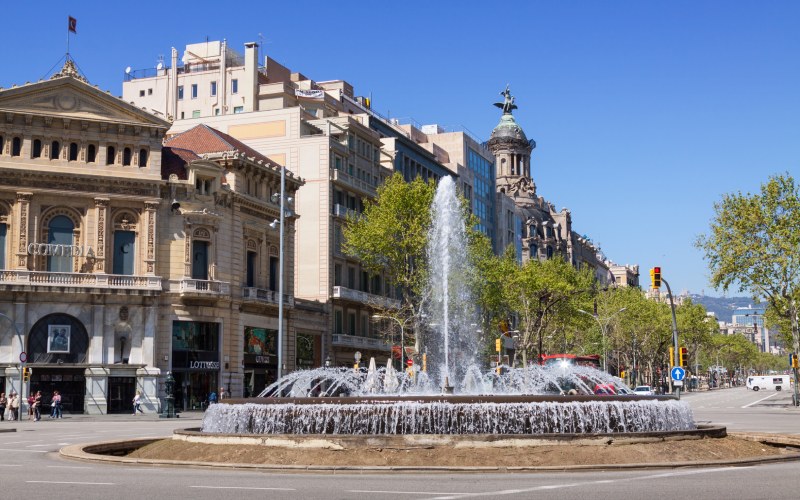 In the capital of Catalan modernism, is located the Paseo de Gracia. An avenue that is known as the Golden Mile, because in its extension are the most exclusive luxury firms in the world. In addition, the most important shopping centers are located there, around Plaza Catalunya.

But it does not only stand out for its commercial spots. Paseo de Gracia is an architectural marvel in itself. Its sidewalks, which simulate the bottom of the sea, are a replica of Antonio Gaudí’s design for the interior of Casa Batlló. The latter stands on Paseo de Gracia, along with other world-renowned works such as Casa Lleó Morera by Lluís Domènech i Montaner and Casa Amatller by Josep Puig y Cadafalch. 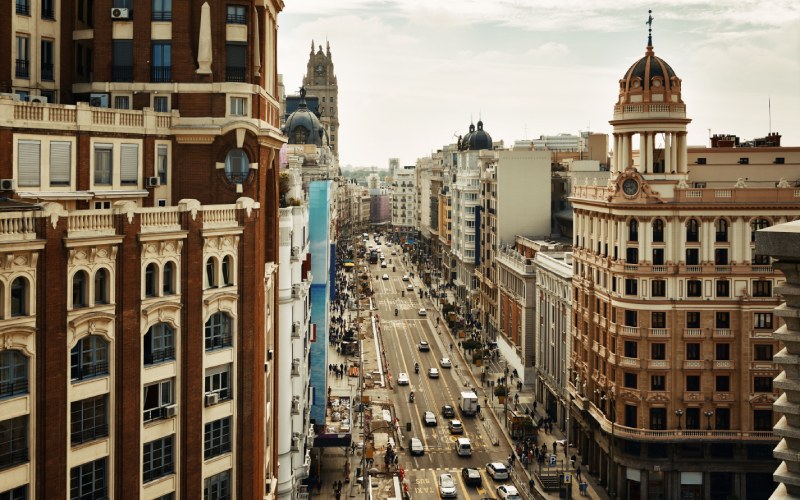 Gran Vía is one of the most emblematic avenues in Spain. Its construction marked the beginning of modernization in the country and some American architectural influences can also be seen here. It is a milestone in history, since the first skyscraper in the country was built on this avenue: Telefónica. This was, for many years, the tallest building on the European continent.

Today, its skyscrapers continue to attract the attention of tourists and locals alike. However, its most important attraction lies in its theaters and restaurants. Some writers, such as Ernest Hemingway, created epic stories in cafés on Gran Vía. Moreover, after the last renovation, pedestrians became the protagonists of this emblematic avenue. The sidewalks were widened and bicycle lanes were created. In this way, the street can be traveled in a more sustainable way. 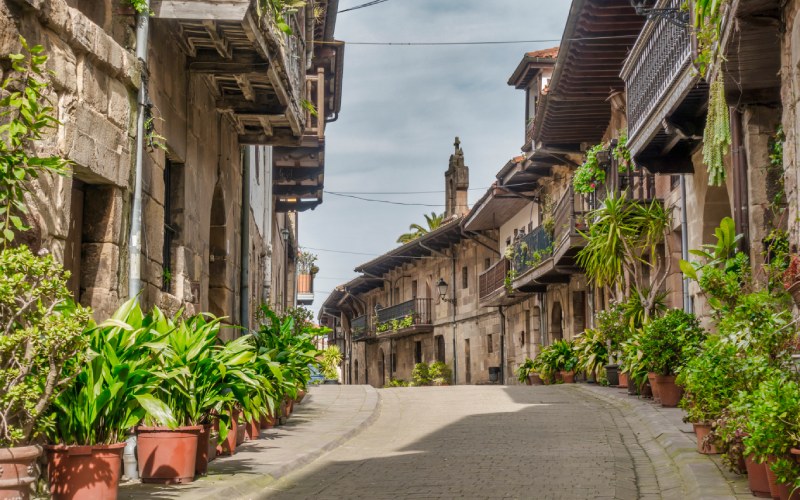 In Cartes, in the province of Cantabria, another of the most beautiful streets in Spain is preserved. It is the Camino Real, a cobblestone and medieval style road that could well be described in a fantastic tale. In fact, Benito Pérez Galdós, renowned Spanish novelist, set his work Marianela in this town.

It stands out for its architectural style and the presence of mansions and palaces. The most prominent families of Cantabrian history had their palaces built in this street. Some of them are still preserved, such as the Quijano Mier, Oviedo and Bustamante houses. All of them are splendidly decorated with colorful plants and lots of vegetation. 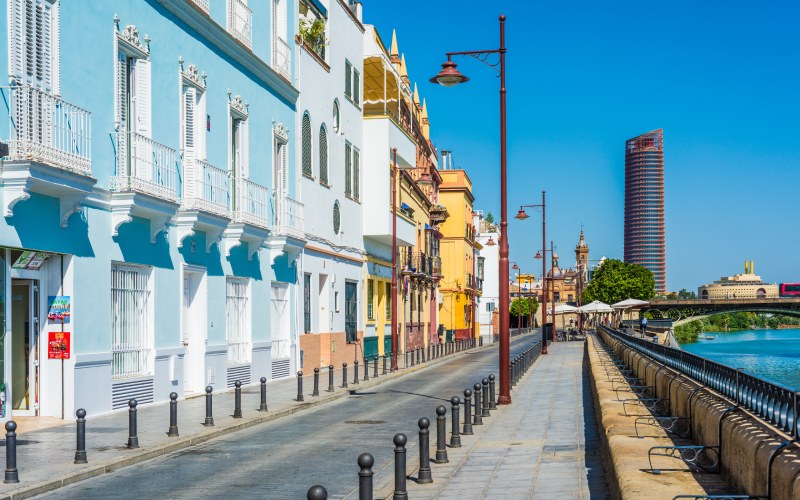 Betis Street, in Seville, runs parallel to the Guadalquivir River, formerly known as Betis River. Hence the origin of the name of this street, which is also one of the most beautiful in Spain. It contains old buildings with narrow and heterogeneous facades, where the predominant color is white and whitewashed. In most of them, the first floor is destined to the numerous bars that offer service in their terraces with wonderful views of the river.

The Casa de las Columnas stands out in its extension, the site where the University of Seafarers used to be located in the past. This institution used to train sailors who left on expeditions to America during the 16th and 17th centuries. In addition, there is another characteristic element. A wall rises along the entire front of the street in order to contain the floods of the river and reduce the risk of flooding. 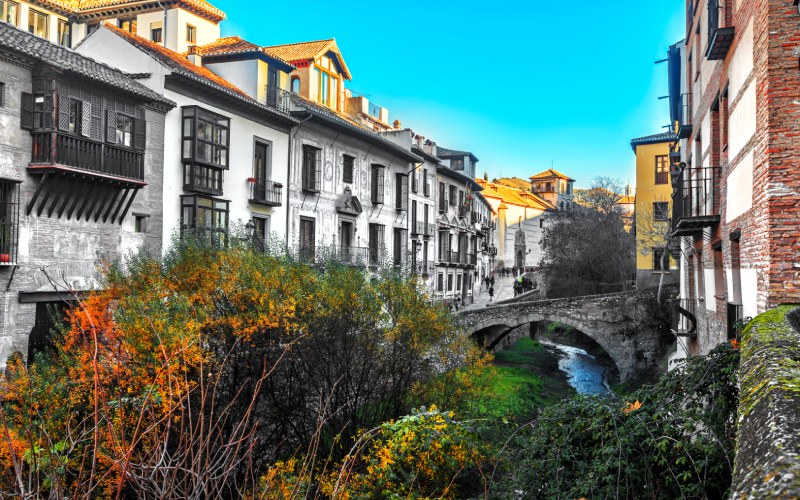 The Darro River crosses the city of Granada and on its left bank extends another of the most beautiful streets in Spain. We are referring to the Carrera del Darro, whose history dates back to the 12th century. At that time, the Muslim nobility chose this site to build their palaces and residences. Some of them are still preserved and give this street a particular charm.

It also houses Renaissance buildings and small monasteries. Among them stands out the church of Santa Ana, in whose structure one can perceive many Muslim influences. Its exposed bricks and the arches crowning its entrance door make this modest church an must-visit in Granada. 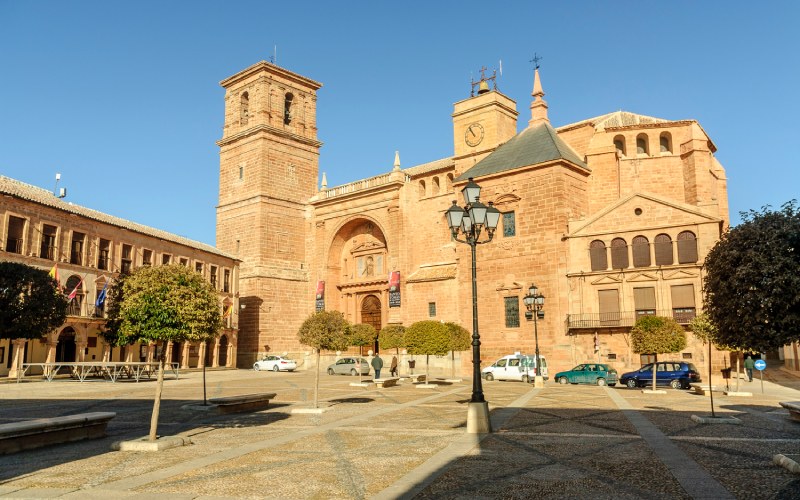 How could it be otherwise, in the town of Villanueva de los Infantes, in Ciudad Real, there is also a Cervantes street that pays homage to the author of Don Quixote. However, this street is somewhat peculiar. Between the 16th and 17th centuries, the Spanish nobility built their great palaces here and some of them can still be seen today. They can be recognized by the coat of arms that marks their facade, through which it was intended to show the power of the owner.

The church of San Andrés is located a few meters from this beautiful street. The building stands out for its imposing classicist facade of reddish brick, which was built in the 16th century on a hermitage. But not only in its architecture is represented this artistic current, since Francisco de Quevedo was also buried there for one hundred and fifty years.

The historical and cultural diversity that exists in the country allows to enjoy numerous architectural styles and diverse landscapes. Spain’s most beautiful streets are a reflection of this attribute and to walk through them is to review all its centuries of history. These streets allow the visitor to travel through time, art and history.