Scene of the coexistence agreement between Muslims and Christians

In Sierra Cabrera, in the easternmost region of Almería, we find the beutiful town of Mojácar. It boasts an extensive cultural legacy in which there is a strong  Muslim influence. Mojácar is divided into three different areas: the village, the town centre on the hilltop, and the beach, located in the Mediterranean sea.

The first traces of the human presence go back to the Neolithic, around 4000 BC. Later the Greeks established themselves, who gave it the name of Murgis Akra. Centuries later, already under Arab rule, it went through a period of great splendour thanks to its location. This made it a stronghold off the African coast. When Muhammad I of Cordoba (823-886) was crowned, he established himself as sultan in Granada. With this, Mojacar became part of the Nasrid Kingdom and became a frontier town. To protect it, numerous watchtowers and the largest cistern in the kingdom in the south of the Peninsula were built.

On June 10, 1488, the Muslim authorities surrendered to Ferdinand the Catholic. A pact of coexistence between Muslims, Jews and Christians was maintained. In spite of this, the Castilian presence was reinforced with one hundred families from Murcia. In 1518 an earthquake destroyed a third of the city and a large part of its fortifications. These were to be rebuilt and renovated during the following three years. Already in 1530, Mojácar received the title of “city” from the Emperor Charles V. 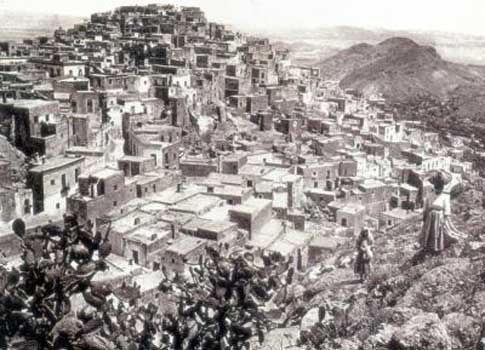 Mojácar in the past

Mojácar would never cease to be in Christian hands, despite the attacks by Moors and Muslim pirates. One of these assaults took place during the Insurrection of the Alpujarras (1568-1571). The city demonstrated its loyalty to the Spanish monarchy. In fact, thanks to its actions, Aben Humeya was not able to restore Arab rule in the peninsula.

Years later, Philip II gave the enclave the motto of “the very noble and very loyal city of Mojacar, key and protection of the kingdom of Granada“. In the mid-1950s, the Indaliano painting movement, led by the Almerian artist Jesús de Perceval, took this city as a place of inspiration and residence. The Town Hall gave away abandoned land and houses to artists and entrepreneurs who wanted to settle there. This facilitated the progressive influx of tourists.

What to see in Mojácar

Things to do in Mojácar normally involve walking through this town’s beautiful and rich artistic heritage: Santa María church-fortress, Puerta de la Almedina (City Gate) or Macenas Castle Beach are some of the main attractions. If you decide to walk around, your visit will probably take you between one morning and an entire day, depending on your pace. The surrounding areas are also worth visiting; we would like to highlight the famous locality of Tabernas, the Almanzora Cave northwards, or Níjar and Cabo de Gata-Níjar Natural Park to enjoy the active tourism granted by that amazing natural space.

Getting to know Mojácar implies going around its narrow and staggered streets surrounded by whitewashed houses on foot. The Muslim trace of the village is reflected in the historical town center: the Santa María church-fortress, built in 1560 upon an old Muslim mosque. The temple has blocks of stone in a Gothic and Reinassance style as a refuge against all the pirate and Berber attacks. In front of the church, the Mojaquera statue from 1989 pays homage to all the women of this village: a female figure, with her face covered by the typical Arab veil, carrying a jug to pick up water from the public fountain. 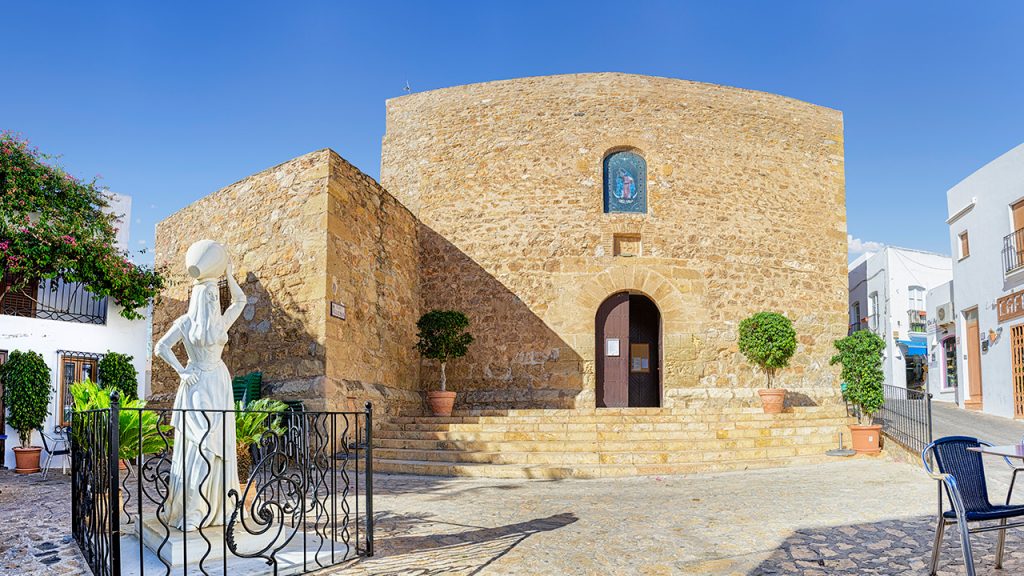 Going down via Correos street, you will find the Puerta de la Ciudad, also known as Puerta de la Almedina, which is one of the lastest remains of the Arab wall. It was built in 1574 as the main entrance to Mojácar, and it is made up of a round arch in which the town’s emblem is placed. 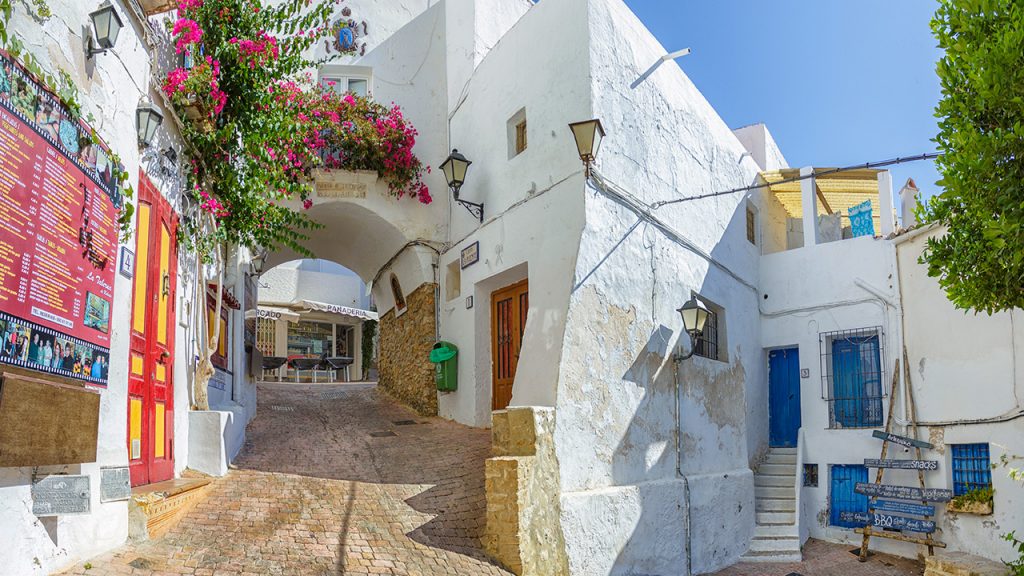 Nearby you will find the Casa del Torreón, the collection of taxes old headquarters, which functions as a hotel nowadays. If you go a bit further, you will see the Plaza de las Flores, which used to be the entrance to the Jewish Quarter (steep streets in a sort of a laberynth outside the town walls).

Another town’s symbol is Fuente Mora (The Moorish Fountain), where the inhabitants of the town used to go to drink and to wash their clothes. This was the place where the negotiations in the town took place, leading to hand in Mojácar to the Catholic Monarchs. 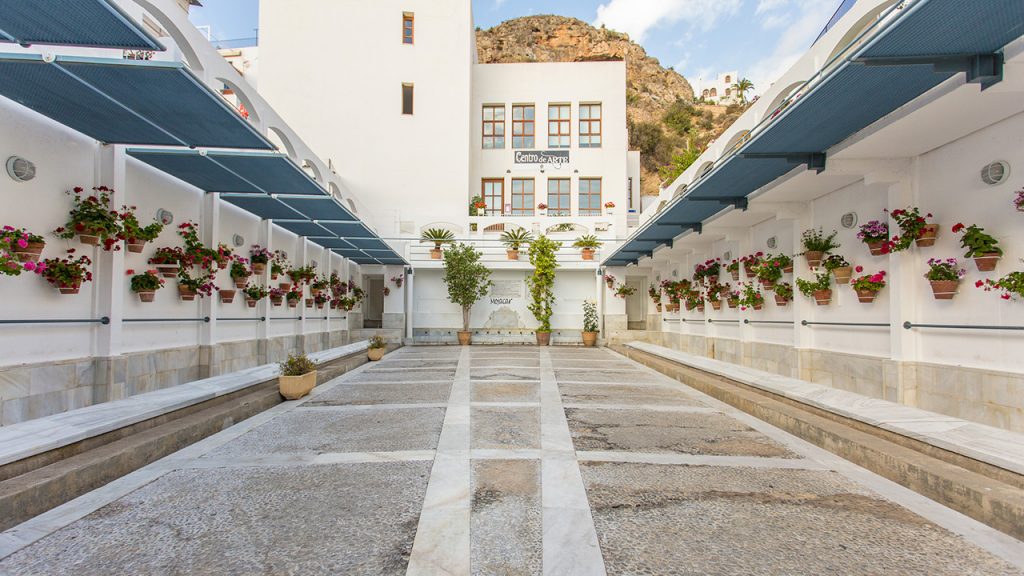 From the Nueva Plaza viewpoint, you can have the best views of the Las Pirámides Valley, the Mediterranean sea and the Cabrera, Almagrera and Bédar Mountain Ranges. In this plaza, you can also visit the Nuestra Señora de los Dolores Hermitage, a building from the 18th century which is used nowadays as a store.

On top of Mojácar, a castle from the 13th century can be seen, now used as an auditorium.

The town is located two short kilometers away from the beach. Mojácar has 17 km of coast, 12 of which are completely virgin and employed for natural purposes. There are numerous beaches ranging from small solitary bays to crowded areas. Macenas Castle Beach is famous because of a fortress that was built there in the 18th century. Nowadays, only the tower remains from the original building. 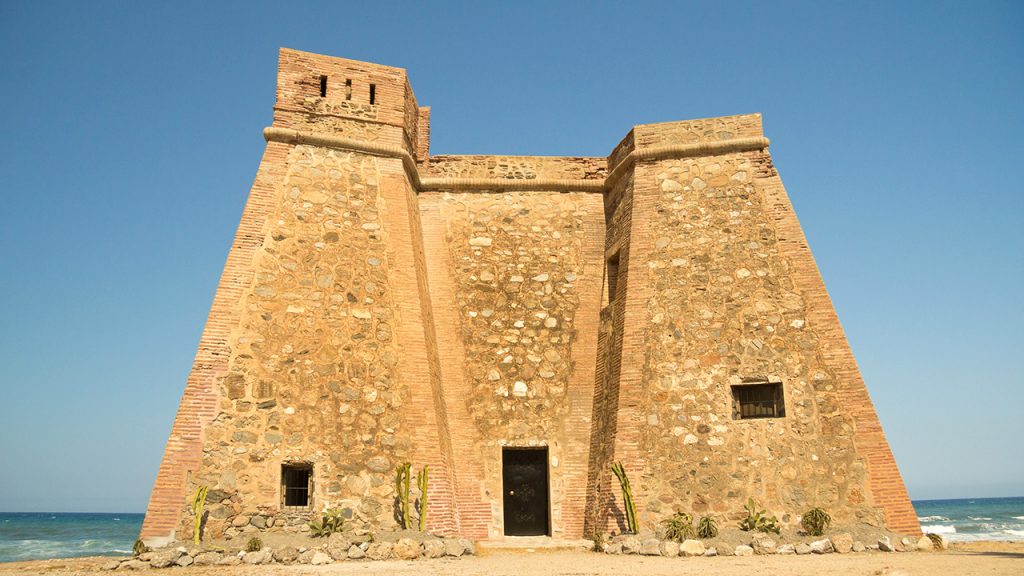 Indalo: the symbol of Mojácar

However, the most symbolic main sight in Mojácar is the Indalo: a figure with an arch joining its hands. It was found for the first time in a rupestrian painting in the Lebreros of Vélez-Blanco cave, and since then it has become a lucky charm. The tradition in Mojácar involved women drawing one indalo at the entrance door of their houses, so keep an eye out for them one the white walls of the village. 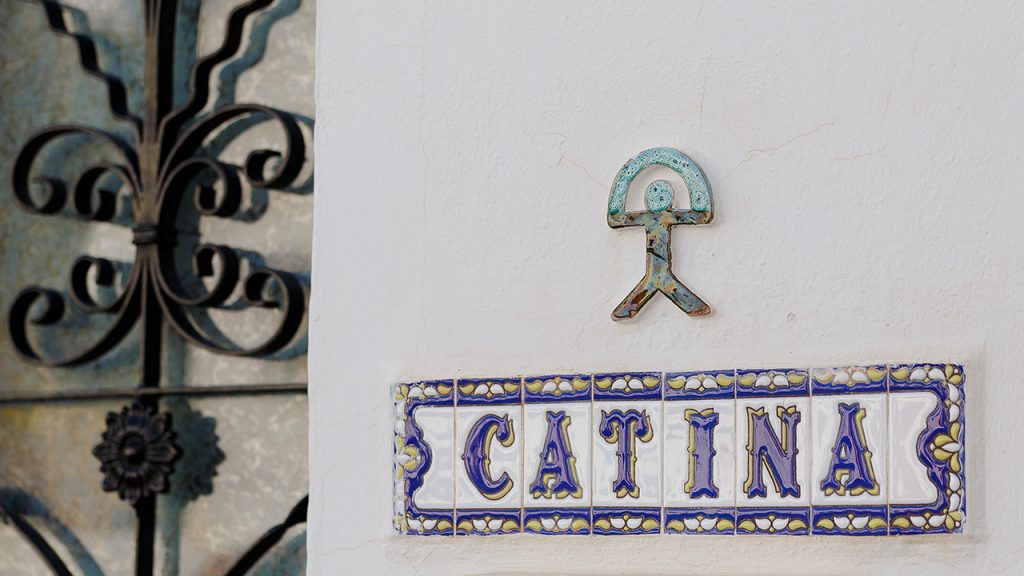 An Indalo in one of the streets of Mojácar