The Casa Botines is a beautiful neo-Gothic monument located in León, in the popular Plaza de San Marcelo. Today it is owned by Unicaja and houses the prestigious Casa Botines Gaudí Museum, FUNDOS’ main cultural and artistic project. It is, without a doubt, one of the region’s highlights in terms of research, exhibition and dissemination of art and knowledge. Not only is it a temple of knowledge and a relevant heritage figure, but it is also a building with an architecture that deserves to be studied, the work of the architect Antoni Gaudí. 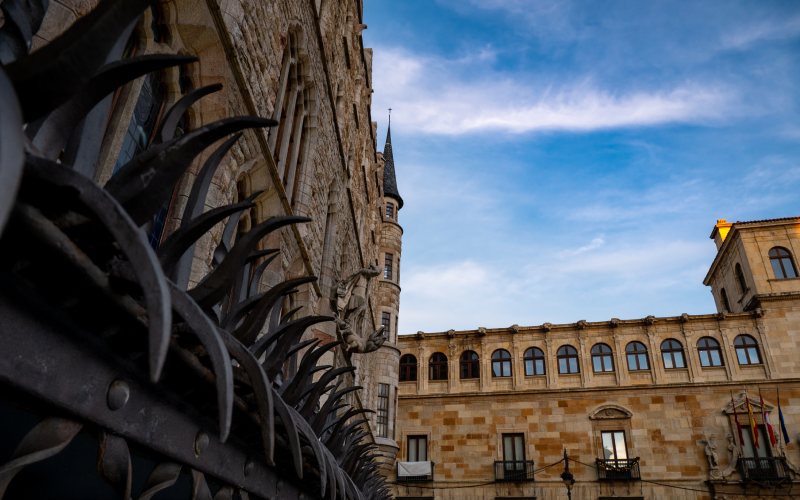 Today Casa Botines is open to the public and houses permanent and temporary exhibitions of great public interest. The museum located there has submitted its candidacy for the EMYA Awards as European Museum of the Year. But, above all, it is one of the great symbols of the capital of León, together with the Roman remains, the cathedral and the San Isidoro complex.

An impressive building from the end of the 19th century

The Casa Botines is a building adjacent to another very important one, the palace of the Guzmanes, current headquarters of the Provincial Council of León and where the provincial political plenary sessions are held. The construction was commissioned by the Catalan architect Antoni Gaudí. The genius designed and built the building, now declared an Asset of Cultural Interest, at the end of the 19th century.

It is one of the three works he developed outside Catalonia, some of which, like the Palace of Astorga, are now considered a heritage treasure. The Botines House is a peculiar architectural jewel for transmitting direct influences of neo-Gothic, with medieval reminiscences and modernist touches typical of the personality of its author. You can make out, from the outside and at its corners, those two cylindrical towers that lead to a point and that gives it that look of fairy tales. 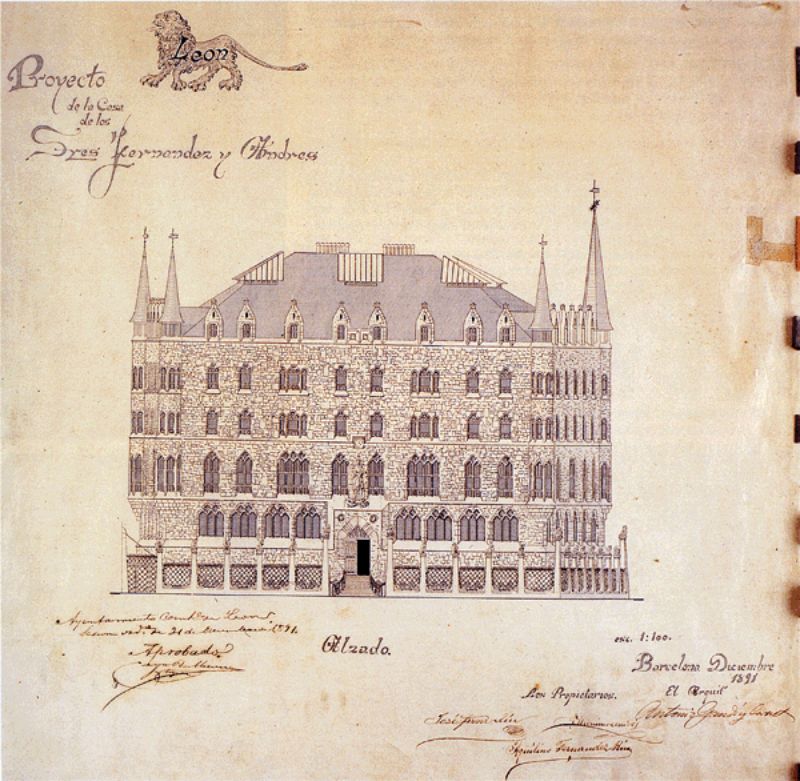 Elevation of the building made at the time by Antonio Gaudí. | Wikipedia

Although it may seem a magnanimous and complex work, the truth is that it was built in just ten months, between 1891 and 1892. Such was the speed of construction that unfounded rumors spread like wildfire in the city of León, casting doubt on its strength and solidity. Time proved its architect and builders right, since even today its structure remains firm without cracks having appeared. It has a total of six floors, including the attic and basement. An anecdote to note is that the Great Hall of the Tower, a bright and beautiful space located in the attic, can be used today to celebrate civil weddings. It is truly a beautiful place.

The prestigious signature of Antonio Gaudí

This Leonese monument owes its name to the Catalan magnate Juan Homs y Botines, the project’s ideologist and a man who made his fortune in the city of León at the end of the 19th century, alternating his work as a financier with that of a textile entrepreneur. The building is also known by the name of Casa Fernández y Andrés. On its façade you can see a picture of St. George and the famous dragon, a last-minute addition that marked the end of the work and that is still preserved today. 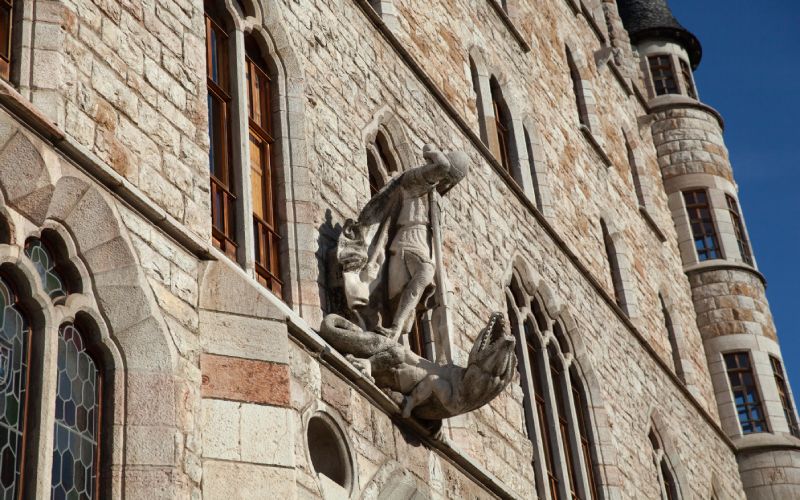 Statue of St. George slaying the dragon over the entrance of Casa Botines. | Shutterstock

When he conceived and built the building, Antoni Gaudí, although very young (39 years old) was already an architect of national and international fame with a very busy schedule. At the end of the 19th century he was immersed in several projects, among them the pre-study of the Sagrada Familia. For this reason, he was forced to delegate tasks to Claudi Alsina, a master of Spanish urban planning who was skilled in large-scale works. The building faithfully reflects the artistic personality of the Catalan genius. Today it is regarded as one of the great works not only of the author, but of the entire region of Castile and León.

In León there was a large Catalan representation at the end of the 19th century, always motivated by business. From the friendship with the bishop of Astorga, Juan-Bautista Grau, and the patronage of Count Eusebi Güell, comes the link between Gaudí and the city. Time has proven right those who bet on him. Not in vain, today both the Episcopal Palace of Astorga of 1889 and the Botines House of 1891 are considered fundamental works of the cultural historical heritage of the region. 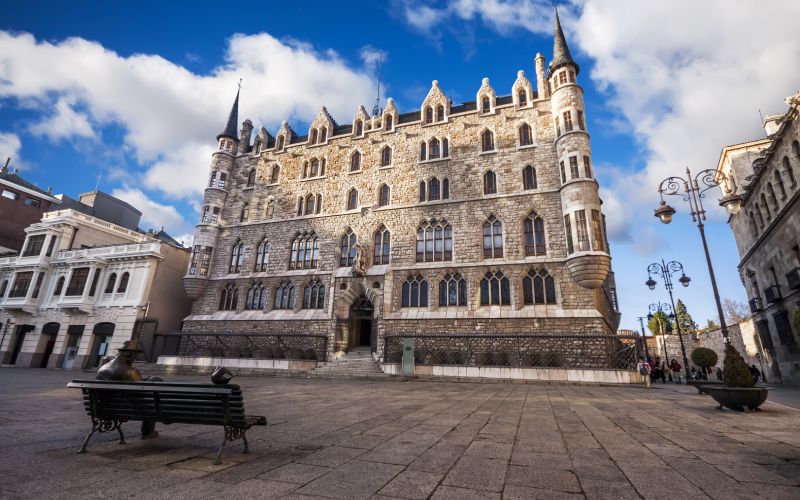 The Botines House in León. | Shutterstock

A fusion of styles always associated with banking

For most of its existence, Casa Botines has been owned by banks. In 1929 it was acquired by the then well-known Caja de Ahorros y Monte de Piedad de León. Since then, it has passed from hand to hand of the owners of the savings banks that have been changing names. The bank was later known simply as Caja León until it became Caja España in 1990. All the bank owners carried out reforms and works on its original structure. In this way it was the subject of many controversies both at a technical level and in the popular and citizen sphere. Today its rightful owner is the Fundación Obra Social de Castilla y León (FUNDOS) Spanish organization. 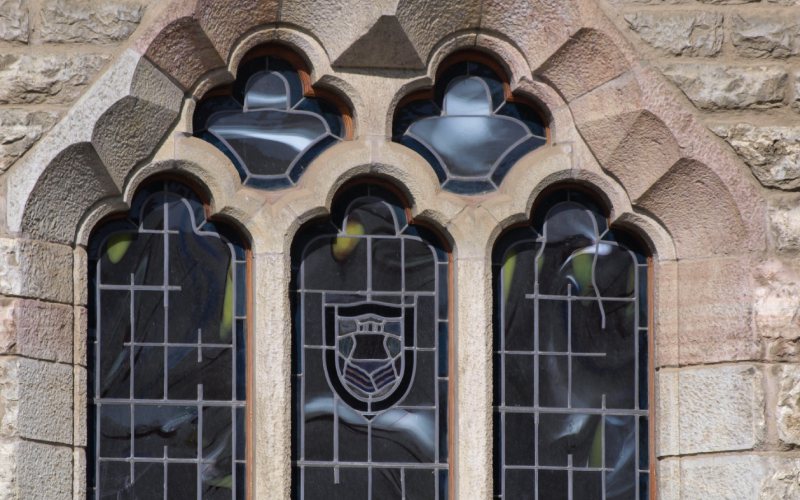 Some details of the windows of the Casa Botines Gaudí museum. | Shuttertock

For many years the building, trapezoid-shaped, housed offices and outbuildings of the textile business that its owners promoted. The upper floors, the third and fourth, housed luxury apartments. It was the only residential building designed by Gaudí in his entire career. Once considered a stately building of the high nobility, it retains a certain mystical, almost religious air. Its exterior, symmetrical and made of limestone rock, gave it an older appearance than it really is.

Today you can visit and tour this building that houses a museum of great prestige called Casa Botines Gaudí Museum. It is a perfect monument to dedicate a morning and delve into its past and peculiarities. Casa Botines Gaudí currently has several exhibition and conference rooms, a restaurant in the basement and an attic where events are held. A must stop if you are in León and want to know its history.

Castile and León, culture, gaudí, history, León
It may interest you...