The power of the Indians is present in northern Spain more than anywhere else. Especially in Cantabria and Asturias, the signs of power of those merchants who “made the Americas” are numerous. Works of art, especially architectural, which have one of their greatest exponents in Comillas, one of the most beautiful Cantabrian towns. It is not in vain that the Indian paradigm, Antonio López y López, the first Marquis of Comillas, was born there. This controversial figure was the one who promoted the construction of the wonderful Sobrellano palace and its cathedral chapel-pantheon. 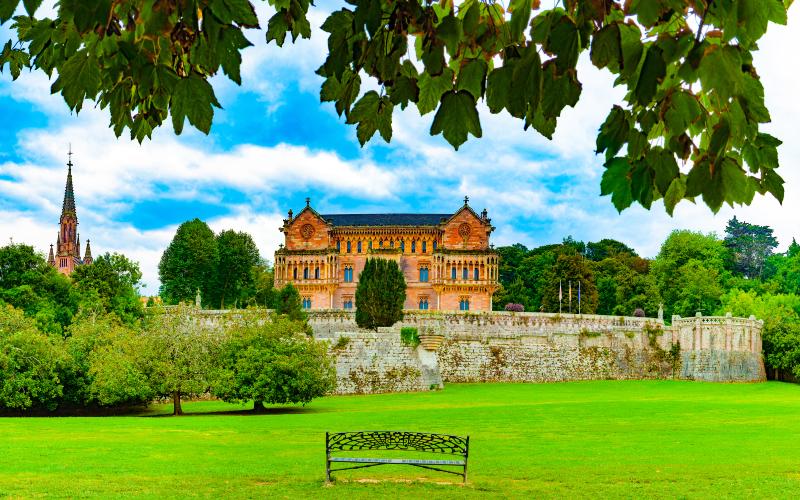 View of Sobrellano Palace from the front yard. | Shutterstock

A neo-Gothic English Palace in Comillas

At first sight the Sobrellano palace reminds us of romantic horror stories. A setting that could be assigned to the work of Poe, Bécquer or Shelley. This neo-Gothic floor plan is combined with modernist details to create an overwhelming ensemble. Its construction began in the early eighties of the 19th century. Joan Martorell i Montells was in charge of its design. This architect from Barcelona, a city famous for modernism, was one of Gaudí’s masters and colleagues. He used a design inspired by the English Gothic of the 16th century, which fits in perfectly with the green and rural atmosphere of Cantabria. 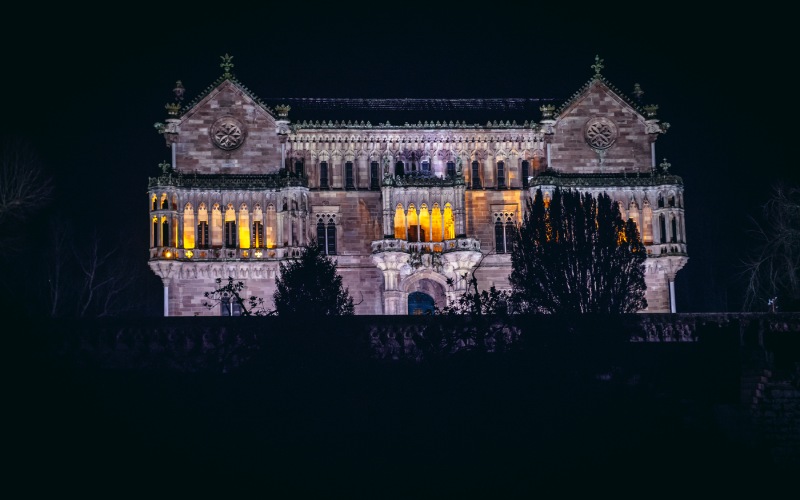 The works were extended until 1888, so that the first Marquis of Comillas could not see them finished, having died in 1883. During the visit of King Alfonso XII to the town in 1881, the year in which he granted the Spanish nobility to Antonio López y López, the first intention was to accommodate him in a palace as remarkable as those in Madrid, which the monarch frequented. However, this was not possible and he stayed in the also well-known Casa Ocejo.

The Second Marquis completed a building that would be his summer home. The entire Sobrellano Palace is a demonstration of the power that businessmen had acquired during the 19th century. A bourgeois display of a rectangular floor plan that begins with the spectacular main façade. Full of details, it is made of stone from Carrejo, a Cantabrian town near Cabezón de la Sal. This provides an uneven colouring that highlights the galleries with colonnades, profusely decorated. Besides, it is worth mentioning the exterior sculptural work of Joan Roig i Solé.

The stately air is also transferred inside. Its hall distributes the corridors to the different rooms, stairs included. The stone prevails together with hardwoods in a very elegant set. Meanwhile, stained glass windows are common and lead to generate a curious lighting, which stands out especially in the staircase mentioned above. During the guided tour, the main spaces on the first floor are visited, such as the pool room or the library. 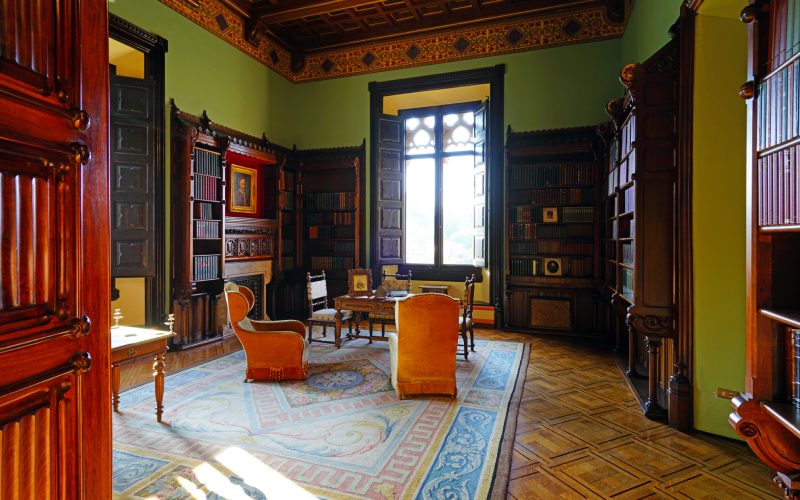 Library of the Sobrellano Palace. | Shutterstock

However, the so-called “throne room” stands out from the rest. As if it were a royal hall, the paintings done by Llorens i Masdeu review milestones associated with the first and second Marquises of Comillas. It was the latter who chose the occasions represented, from helping the king in the Cuban War of 1969 to the inauguration of the Seminary in 1887. Gold leaf and stained glass windows make the room stand out even more.

The Small Cathedral Next to Sobrellano’s Palace

If Antonio López y López could not see the palace finished, nor the seminary that would end up being the Pontifical University of Comillas, he was able to enjoy the chapel-pantheon during his lifetime. Despite its small size, similar to a hermitage, its appearance is similar to that of a cathedral, even with gargoyles. Its purpose, in addition to hosting religious services, was to serve as a place of eternal rest for the 1st Marquis and his family. A space dedicated to them was also designed by Joan Martorell i Montells and completed in 1881.

This tribute character is made present by the fact that it has an ambulatory, a space that enlarges the apse and allows to go through it. Its use became widespread during the Romanesque period to allow the worship of pilgrims, for example in Santiago de Compostela. The area of the mausoleum is a great example of the Catalan style of the time. José Llimona carried out the works associated with Antonio López y López’s brother and his wife. Venancio Vallmitjana was in charge of the tomb of the first marquis and his wife. Meanwhile, his brother Agapito Vallmitjana did the lying Christ of the second one.

Of the nave, the coffered ceiling, the altar and the polychrome stained glass windows stand out. In addition, the set of furniture was designed by Gaudí. Comillas is also home to his famous Capricho. The most outstanding seats or seats of honor follow the neo-Gothic style of the chapel, as well as the kneeling chairs that are attached to it. They are made of wood, with metal parts, and red velvet. The benches were also made by the well-known modernist.

The Best Example of the Catalan Style in Comillas

It may seem curious that Comillas is one of the best examples of modernism in Spain. This is due to the influence of the First Marquis of Comillas. During his adolescence he was forced to emigrate to Cuba. There he created a small store of low-cost articles. However, he managed to marry his landlord’s daughter, Luisa Bru Lassús. This fact was what tied him to Barcelona. He remained on the American island for several years, where his three children were born. At that time he created the basis of his fortune, making himself rich from the slave trade as an intermediary.

These dark issues did not prevent him from prospering and returning to Barcelona. Like a true magnate, he was in touch with the highest Catalan bourgeoisie and the best artists of Barcelona. As a result, his hometown has nothing to envy in terms of modernism to places like Reus or Melilla. His fourth son was his heir, while his first daughter married Eusebi Güell. Güell was a famous collaborator of Gaudí and promoter of the park that bears his name. 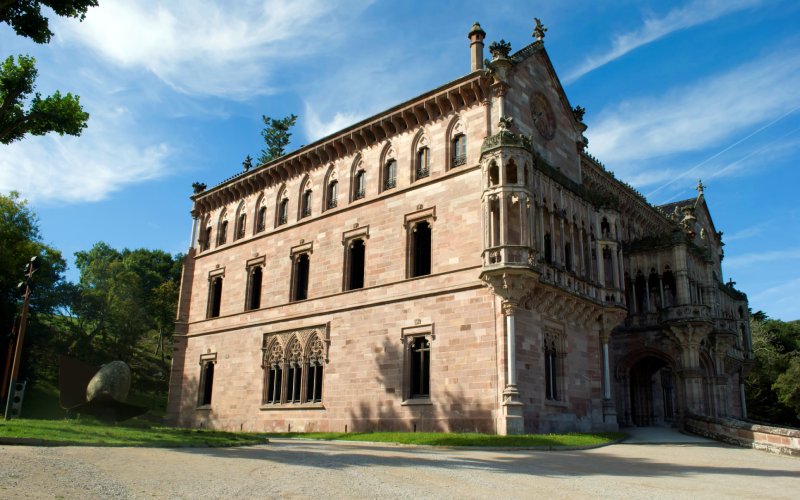 Side of Sobrellano Palace. | Shutterstock

Without a doubt, the legacy designed by Joan Martorell i Montells is the most outstanding, with the triumvirate formed by the chapel-pantheon, Sobrellano Palace and the Pontifical University. Although it is the neoclassical style that predominates, contributions such as the sculptures by Joan Roig i Solé and the integration of these particular elements bring a modernist vision to the whole. El Capricho is another great exhibition that is connected with Antonio López y López by the fact that it was commissioned by the brother of his sister-in-law, the also Indian Máximo Díaz de Quijano.

Completing the Visit to Sobrellano’s Palace 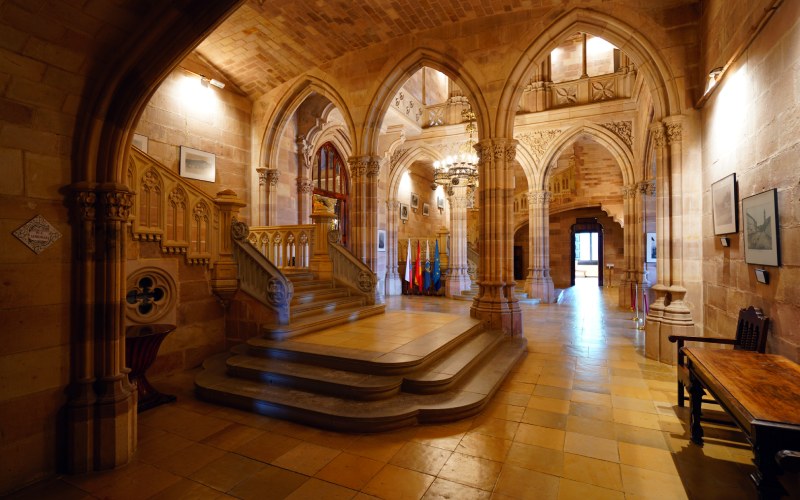 Interior of the Sobrellano palace. | Shutterstock

Palace and chapel opening hours are extensive. The price of each guided tour is three euros. Nearby is the Capricho de Gaudí, in the same park that houses the protagonists of this article. In the high part there are viewpoints and trees, while at the feet there is a wide field of grass. The great beauty of the place makes it one of the most beautiful gardens in its community. Meanwhile, the exceptional Gothic cemetery of the village also shines. Along the A-8 you can visit places like San Vicente de la Barquera, Santillana del Mar, the Altamira caves or Santander itself. A very interesting addition is that the Way to Santiago passes through all of them on its northern route.

cantabria, churches, Northern Way, parks and gardens
It may interest you...

The Royal Palaces of Spain, art as a witness to history
Spain has many Royal Sites throughout its geography, including the impressive Royal Palaces. Beyond being Más información