The Romanesque is one of the most representative styles of the Middle Ages. Reflecting a new era, it spread throughout Europe. Sober, instructive, primitive in many ways, the Way to Santiago helped it to become established in Spain. Given that León was and still is, with its cathedral at its head, one of its capitals, it was logical that one of the best Romanesque works on the continent is there. It is the royal basilica of San Isidoro. A place tied to the Kingdom of León and which served as a place of eternal rest for its monarchs. 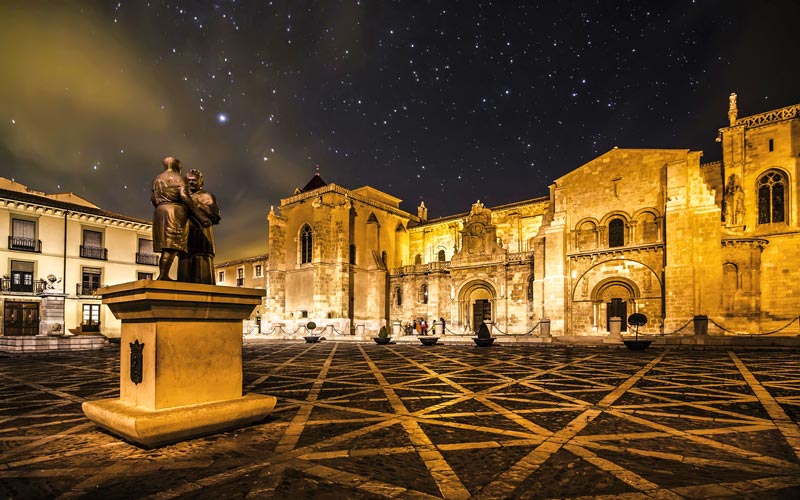 A real church for a booming kingdom

The move south of the border with Al-Andalus meant that the Kingdom of Asturias expanded. Thus, in the 10th century, the Kingdom of León took over. These were turbulent years full of intrigue, short reigns and internal struggles. Be that as it may, despite the conflicts with Cordoba or Navarre–Pamplona, the Leonese crown prospered. Meanwhile, after the pilgrimage of Alfonso II el Casto, the Way to Santiago was established as one of the great routes of Christianity.

Thus the need to build large temples in León was urgent. Also bring relics of importance. Sancho I in the middle of the 10th century founded a church to house the remains of San Pelayo, who was recently martyred by Abderramán III. It was located next to an earlier small temple dedicated to San Juan Bautista, built on top of a Roman building. Not in vain, near the basilica there is part of the Roman wall and a museum about Legio. 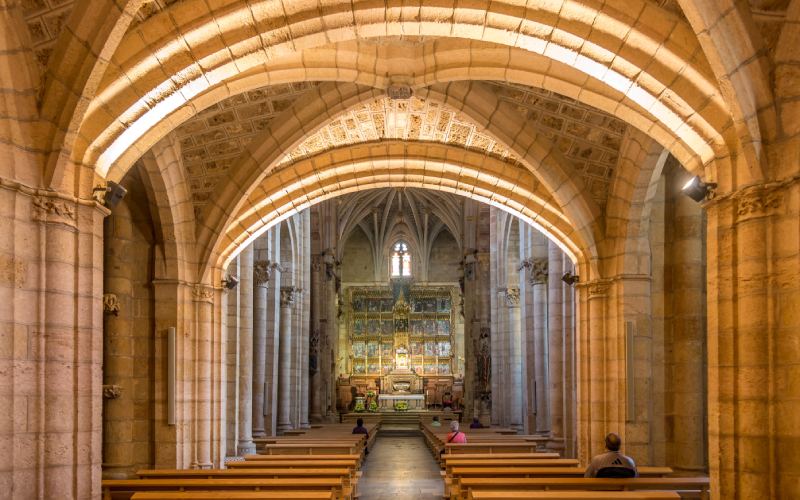 Since then it has not stopped evolving. Its monastic character emerged from the very first moment. At that time it was a female community associated with royalty that settled in it. It was led by Sancho I’s sister, Elvira Ramirez. The attacks of Almanzor made them go north to safeguard the relics of San Pelayo in Oviedo. However, great ladies of León would remain associated with the future basilica for a long time.

The great single ladies of León and San Isidoro

The so-called Infantado de San Pelayo was a key organ in the Kingdom of León. Its leaders were the masters of a network of monasteries headed by the one of San Pelayo, San Isidoro later on. Elvira was the first abbess, for a few years from Palat del Rey, another Leonese monastery, and then from the church of Sancho I. Widowed monarchs and unmarried infantas were at the head of an institution of great power and influence. 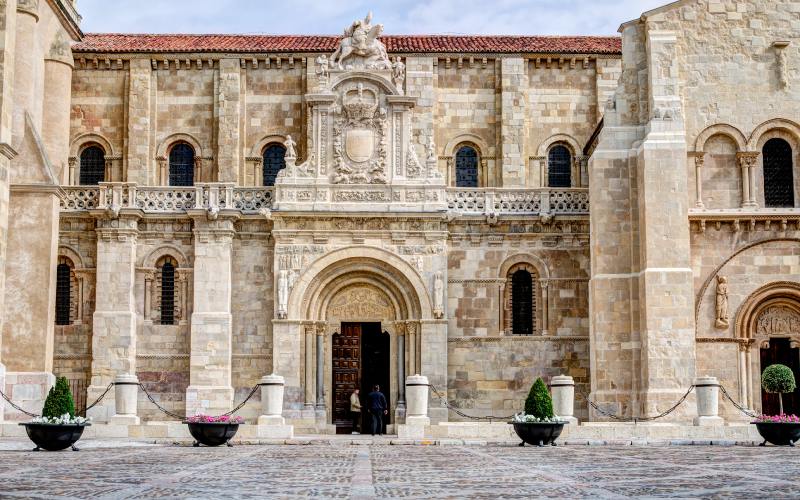 During a period that went from 966 to 1148, when the Infantado de San Pelayo changed its headquarters, the communities varied. There came to be two simultaneously, one male and one female. The real character of the church was also reinforced. The destruction of Almanzor, a brilliant Arab general who gave his name to a high mountain, meant that it had to be rebuilt. Alfonso V was in charge. It was a building of simple materials, brick and mud, which served the purpose of exercising as a small sanctuary. Crucial was his decision to move the bones of ancient kings of Leon there.

However, it was his daughter Sancha who allowed the definitive step towards the greatness of the temple. Domina, and later Queen, her actions were key to the formation of the present Panteon de los Reyes de León. Ferdinand I married her to gain access to the throne, which he achieved. Well persuaded by his wife, he rebuilt the church, in stone. In addition, he made sure that the relics of St. Isidore, then in Seville, were brought to it. It was 1062. From Arlanza came the remains of San Vicente de Avila. In addition, there were also bones that supposedly belonged to St. John the Baptist. In Romanesque style, small and with a palace attached, it was consecrated to the Sevillian saint. 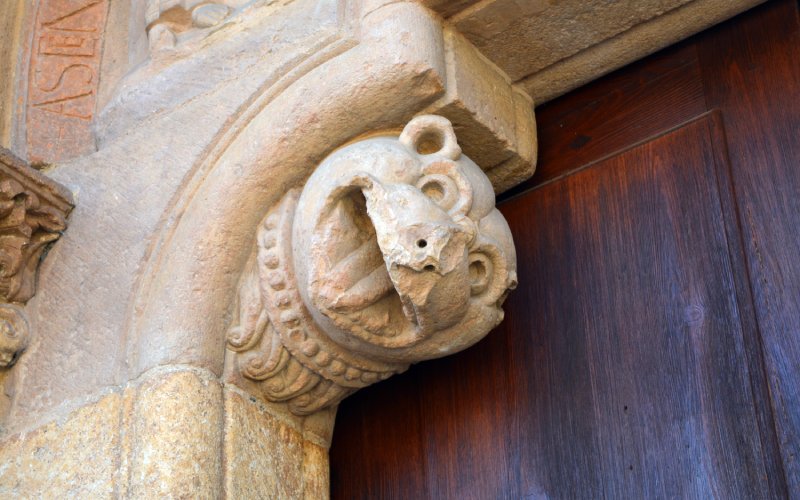 Both monarchs died and were buried there. It is not known if what can be seen today is the result of their patronage or that of their daughter Doña Urraca de Zamora. Most probably it was the latter. Abbess of the Infantado de San Pelayo, she organized the works to build the current temple, expanding it from a small royal church to the enormous gem of the full Romanesque that it is today. Under her auspices, it is believed that the frescoes of the pantheon, the great wonder of the place, were painted. Walls were saved from the previous work and a first cloister connected the portico of the royal cemetery with the northern end of the transept. 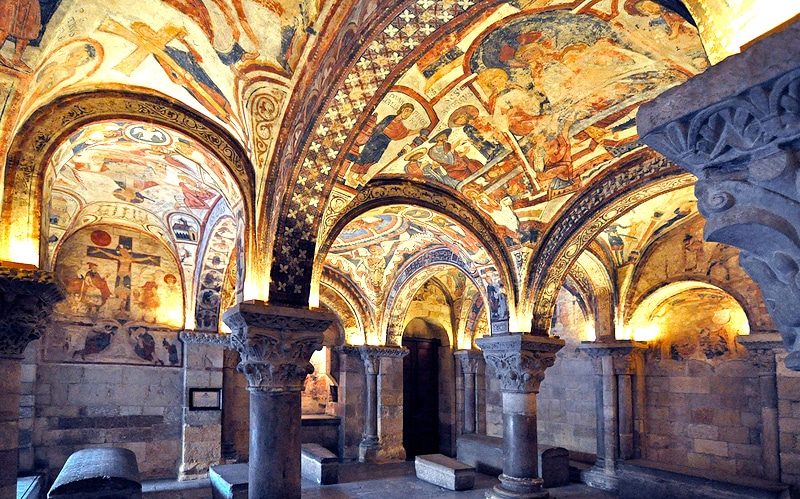 The reforms of San Isidoro

The works were completed after the death of Mrs. Urraca. Unfortunately, the contribution of the architect Pedro Desutamben, one of the most famous at that time, almost destroyed part of the temple. When the projected wooden roof was changed to stone vaults, the structure was seriously overloaded. These problems did not prevent it from continuing to acquire fame, being an obligatory passage of the French Way on its way to Santiago de Compostela. It is one of its most beautiful and well-known churches. 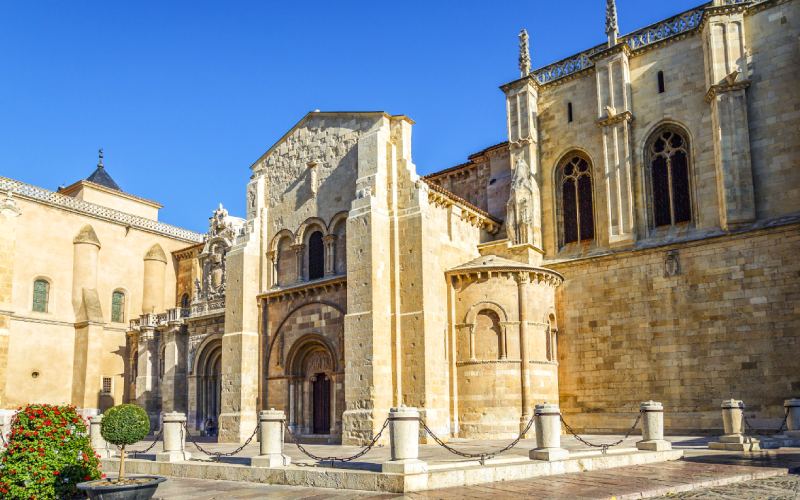 Its transept is a great example of this style. Also the many carved capitals with various motifs, many associated with the dedication of the temple and its royal character. On the outside only one door has been lost, the north door of the transept. The south door is known as the forgiveness door and it is where the medieval pilgrims entered. In the nave, also south, the one of the Lamb opens, with a complex sculpted iconography. Shadowy, it corresponds to everything one learns about Romanesque at school. The panthéon deserves a special mention, which will be discussed later. 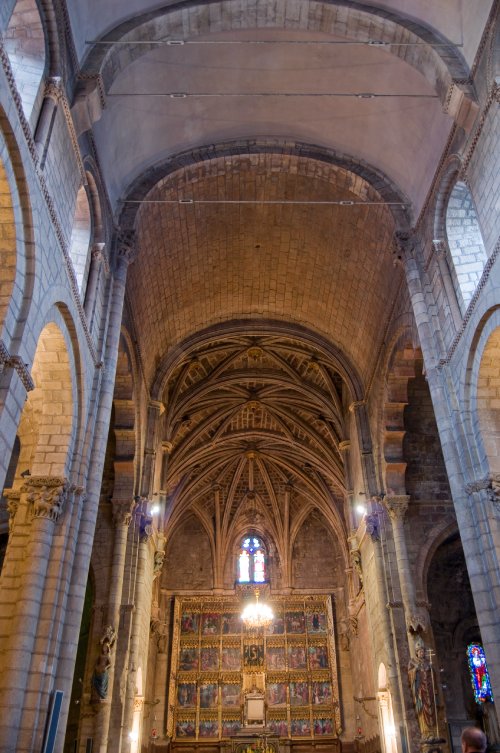 The transfer of the seat of the infant to the village of Carbajal de la Legua and the efforts of Alfonso VII and Ferdinand II meant that it increased its power by being directly attached to the papacy as an abbey. Its powerful abbots were responsible for several reforms. Thus, in 1513 the head of the town was demolished and replaced by a Gothic one. Two decades later the palace complex became a library, one of the first milestones of the Renaissance in Spain. Also from the 16th century is the cloister, which is Gothic, a process in which Romanesque galleries, now exposed, were walled up. Further improvements to the cloister would give it its definitive appearance in the following century. 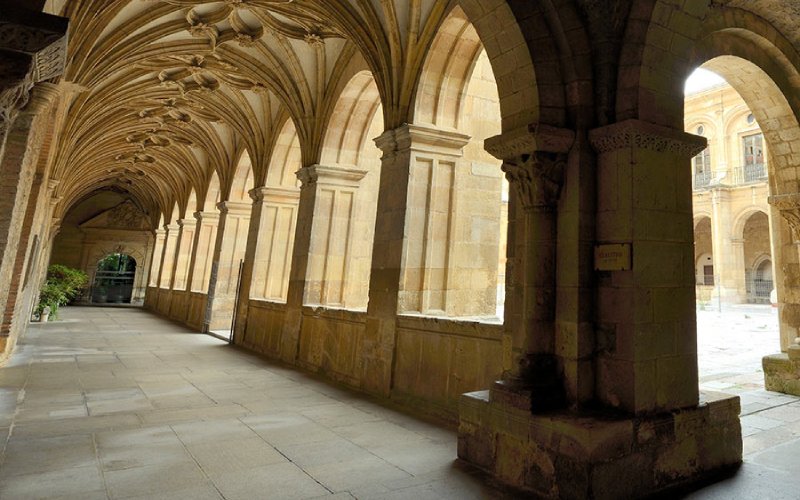 Cloister of the basilica of San Isidoro in León. | Museo de la Colegiata

As has been mentioned, the most outstanding feature of the Basilica of San Isidoro is its Panteón de los reyes de León. With the appearance of a crypt under its roofs, it houses the remains of 23 monarchs, both men and women. It also gives rest to infants and counts, as the first of Castile. A wonder that was desecrated by the French during the War of Independence. At that time, the tombs were used as drinking troughs. When the bones were worn out, most of them were mixed up or lost and it is difficult to assign them. A great deal of heritage damage that spread to other parts of the complex. These Gallic lootings were very common, as were the English. 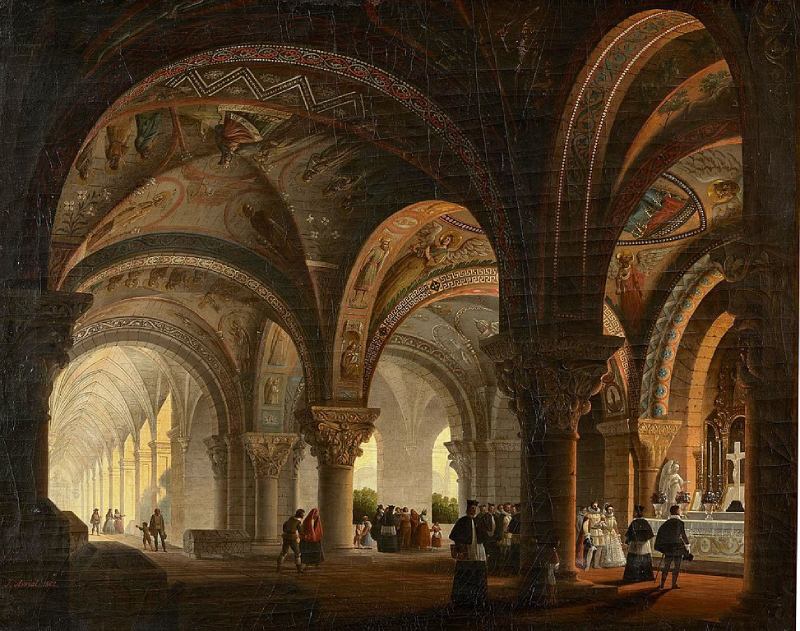 Fortunately, the structure is perfectly preserved. Its central part, the main one, is square and divided into six vaulted spaces. It has the form of a portico, a columned space attached to the end of the nave of the basilica. The capitals are outstanding and have varied themes. They range from vegetal to biblical motifs. The healing of the leper by Jesus stands out. Also the revival of Lazarus, a saint who inspired the name of the port quarantine areas or lazarets, such as those of St. Simon or La Pedrosa. 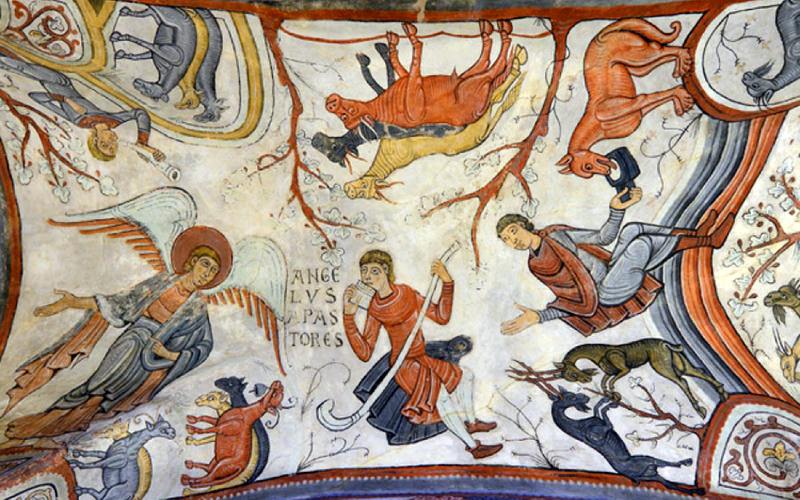 The frescoes cover the whole space in a spectacular way. They cover three cycles of the life of Christ, something that is believed to be related to the medieval liturgy. From the part attached to the south wall of the church these continue in order until they turn around and end up in a doorway. The vaults, arches and upper parts of the walls are richly decorated. The technique used was that of applying a white stucco on which a master of the moment without a name worked. 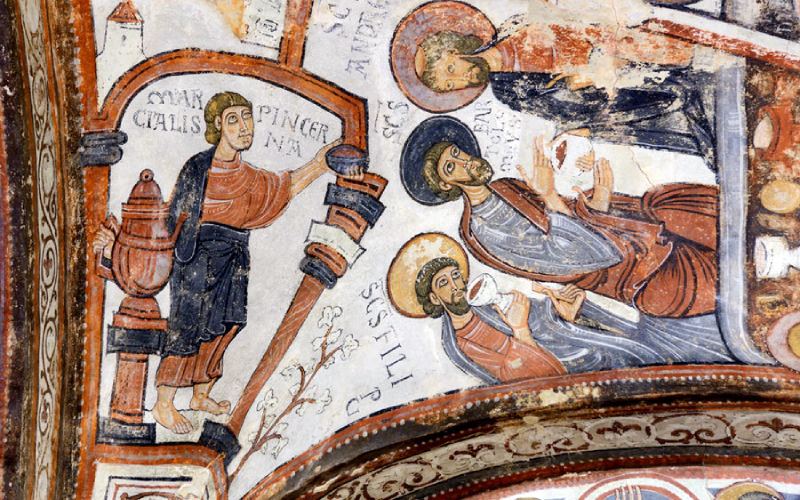 The first cycle reviews Christ’s conception and arrival in the world. Thus, the Annunciation is a beautiful rural picture. The visitation, the nativity, the adoration of the Magi, the innocents and the flight to Egypt are also reviewed. More overwhelming is the section corresponding to the Passion. The last supper in a vault is complemented by a profuse crucifixion detail, which includes the figures of Sancha and Ferdinand I. 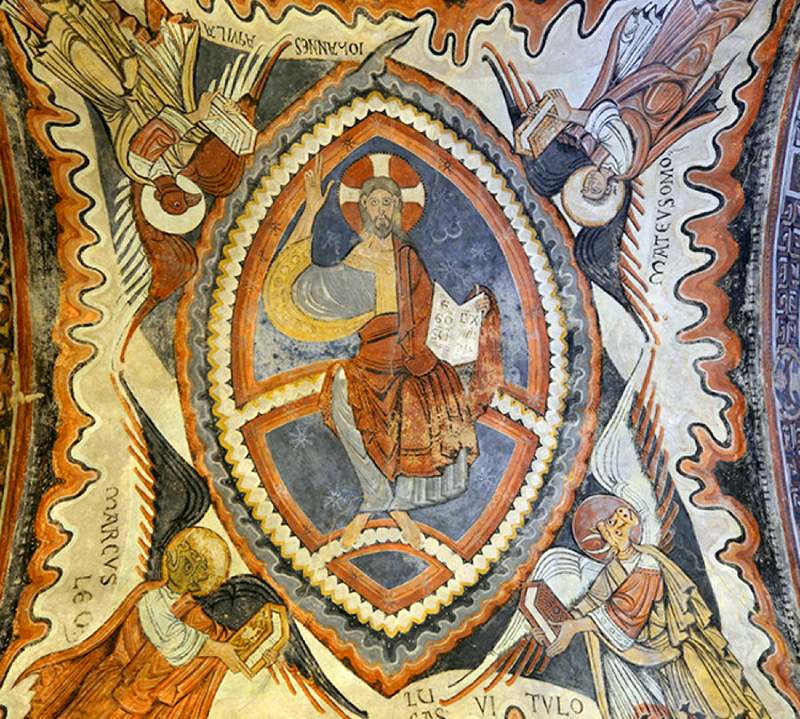 Finally, there is the most colourful one, the one corresponding to the Resurrection. Inspired in part by the Apocalypse, it presents an all-powerful Christ in the figure of judge and pantocrator. The latter is the most outstanding, central painting. Framed in a mystical almond, various symbols show his eternity, like an alpha and omega on each of his sides. The evangelists surround it, in each corner of the vault. In one of the arches that delimit this space a curious calendar is shown, representing each month with the typical peasant labours.

All this makes it an indispensable landmark in Spanish religious mural painting. Next to San Nicolás de Bari in Valencia or the hermitage of the Virgin of Ara in Extremadura it conforms a terna of exception.

The weathercock and other treasures of San Isidoro

The wealth that the collegiate church and basilica of San Isidoro treasured was enormous. This has given rise to an exquisite museum with pieces of great relevance, open morning and afternoon except Sundays, which is only open in the morning. A great complement to the city’s tapas routes. The urns of the relics of San Pelayo or those of the patron saint are two good examples. The library has incunabula of enormous value, as well as old choir books with Gregorian chant scores. 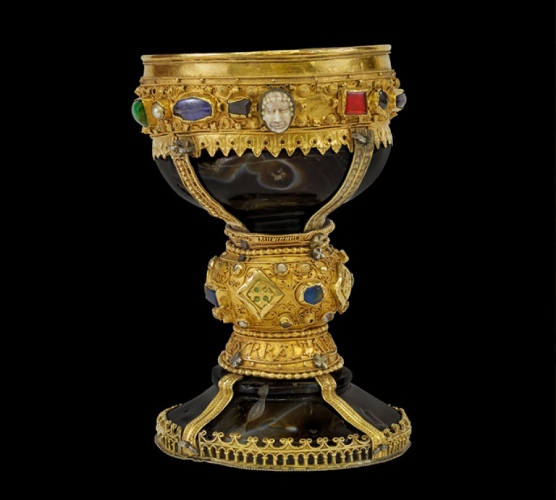 However, the chalice of Urraca, the famous domina mentioned above, is the best known piece. Two Roman pieces from around the time of Jesus are joined with pieces of high gold work. It became famous when it was considered that it could be the Holy Grail. In the cloister, with its many chapels, there are tombstones from different periods, including the Roman era. Other treasures of San Isidoro are other chapels, the interiors in the church, as well as its great main altarpiece. In spite of this, there is an element as curious as it is representative of Leon that draws attention to the rest. It is the weathercock. 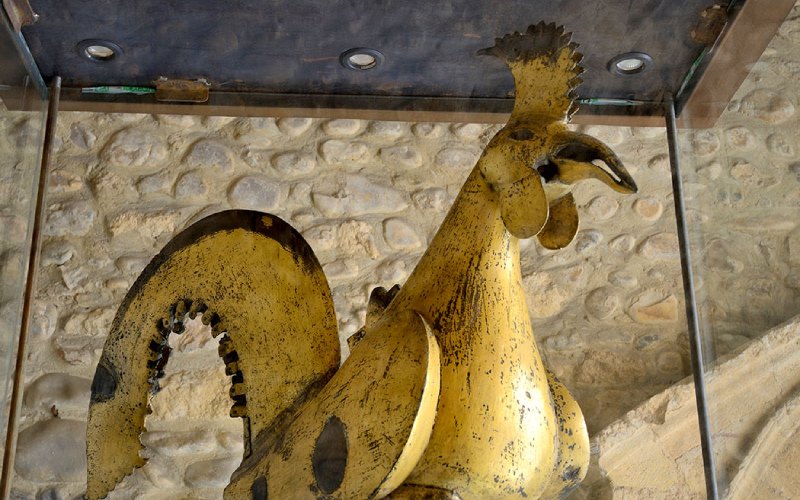 This piece of bronze covered with gold was from the 11th century on top of the Romanesque tower called “del gallo”. During the War of Independence it was shot at, but it did not affect the rooster or the sphere on which it rests. Already in this century it was decided to lower the figure and study it. The investigations were a great surprise when they discovered that it came from the Persian Gulf and had Arab inscriptions. Therefore, it is believed that it is from the 6th or 7th century and that it travelled to León from the Muslim domains to end up being a symbol of the city. Since then, a replica has been exhibited and displayed in the tower.