Capital of the ancient Maragatería

The “Very Noble, Leal, Meritorious, Magnificent, Augusta and bimillenary” rears its historic walled area at the confluence of major communication routes, a situation that became a prominent Roman city and Jacobean stage of the road; maintaining a monumental important attraction.

Plan your stay in Astorga

Located on the road to Santiago and with an important monumental heritage, to cover everything there is to see in Astorga it takes a full day of visits. For the next day, one option is to head west on the highway, on a visit to important natural landscape of Las Médulas; here you can visit the Templar city of Ponferrada. AP-71 motorway to the west you can visit the small Hospital Órbigo bridge-in which was held the “passage of arms’ most famous in history and then continue to the city of Leon. A third option is to travel north to spend the day hiking in the remote and superbly preserved Natural Park Ancares Leon.

About two thousand years ago, in the time of Emperor Augustus, it was founded as a military camp Augusta Asturica the Legio X Gemina. It had a strategic position on the Via de la Plata for the transport of gold was carried from nearby deposits of Las Médulas to Merida in the south. It hosted the Conventus Iuridicus Asturicense, which was the meeting between Romans and indigenous in which it advised the governor of the province, as well as the residence of the legal Legacy and the Attorney for Asturia and Galaecia. It was a very prosperous city, with a network of sewers, the Ergastula or prison slave and one of the oldest Episcopal dioceses of Spain. Towards the end of the third century a wall two kilometers long, which is still called “Roman Gate” was built.

In 385, Bishop heretic Priscillian was executed in Trier; according to legend his disciples carried his body and buried it in the vicinity of the city.
In 410 it was conquered and incorporated into the new kingdom of the Swabians. It was broken into and ransacked by the Visigoths of king Theodoric II in the year 459; recovered by the Swabians, who lost again to the Visigoth king Leovigildo troops in 569.

In the year 714, during their advance, Arab Tariq troops conquered Astorga. In the eighth century the troops of King Alfonso I of Asturias reconquered Astorga. In 896 Bermudo the Blind, brother of King Alfonso III is able to take control of the city, keeping their rebellion for seven years. In 910 King García I of León Astorga maintained its capital in four years. The city will be sacked by the Muslims in the years 987 and 995; as property of the Crown was administered by several tenants real or designated by this family.

Its economic takeoff favored since the ninth century the Camino de Santiago, reaching hospitals and hospices operate twenty pilgrims. By the fifteenth century the works of the Cathedral began and the walls were rebuilt. This rebirth process culminated in 1465 when King Henry IV created the Marquess of Astorga.

In the War of Independence it changed hands several times between Spanish and French; King Joseph Bonaparte, the capital of the department considered the Esla. In June 1812 it was besieged for two months by the troops of General Castaños and Wellington, who finally recovered.

In planning the provincial Liberal government in 1820 it was considered to be one of the eleven capitals; finally, the provincial reorganization of 1833 was attached to the province of Leon.

What to see in Astorga

Following the pilgrimage route as a city tour, you could start by visiting Astorga in the neighborhood of San Andrés, east, around the Church of San Andrés. The steep slope of access to the neighborhood passes through the remains of ancient pilgrim hospitals such as the Five Wounds destroyed by fire. Facing the Plaza de San Francisco is the Garden of the Synagogue. It is a wooded park on the Roman walls rebuilt during the Middle Ages. In the square the Church of San Francisco rises, with some elements of the original Gothic construction. Also the Convent of the Padres Redendoristas, before whose facade has brought to light the remains of a Roman house with valuable mosaics. In the Plaza de San Bartolome is the Monument for the New Millennium (1986) and the Church of St. Bartholomewthe XIII century Romanesque traces in the triangular facade and Gothic tower.

In the Plaza de España, equipped with porticos on several of its sides, is the City of the Seventeenth Century. It emphasizes its baroque facade with side towers connected to the central body by elegant balustrades. The belfry houses the bell which is accompanied by a famous articulated maragatos, which are responsible for telling the time.

The old slave prison is a vaulted underground gallery located in the center of the forum. The Roman Museum has an excellent collection of Pompeian wall paintings rises. The Tourist Office completes this offer to interpret Roman history of the town with a Roman route that is subject and comprising a gate in the wall, double trench camp of the legion, lower thermal baths or the Temple of Emperor . In nearbySantoclides Square is the Monument of the sites, where every Tuesday there is a vegetable market.

In the monumental core to do in Astorga is the Chocolate Museum whose funds include machinery, posters, packaging and photographs of that famous industry city. Also the Episcopal Palace, fantastic silhouette, neo-Gothic of the late nineteenth century building designed by Antoni Gaudí; among its units highlights the throne room and the chapel, which installed the Museum of the paths that gathers artistic works related to the past of the city and the region.
In the Baroque church of Santa Marta it is attached curious the walled cell. These were some hermits who voluntarily recruited there, getting out of a window food and water, and by talking with the pilgrims who came to observe such religious attraction; on the other window the walled heard the liturgies celebrated in the Chapel of the temple. 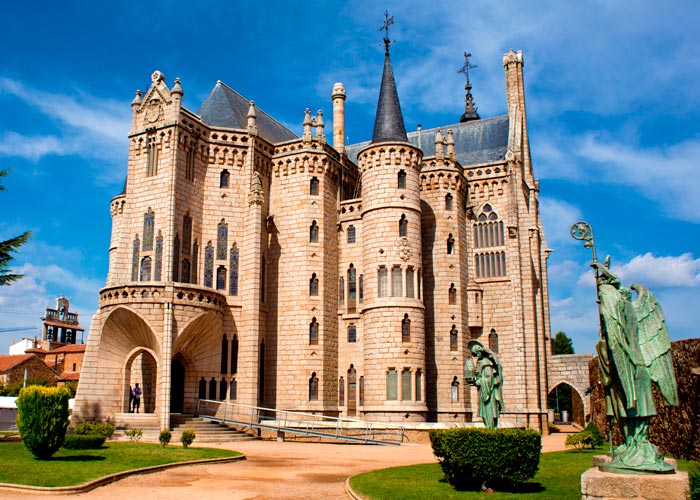 The Cathedral is a magnificent temple whose construction began in 1471, with its latest additions in the eighteenth century. Flamboyant Gothic original scheme of the apse is accompanied by Renaissance elements, plateresque and baroque as the main facade. The interior has three tall ships covered by vaults, with Gothic and Renaissance chapels, converging on the altarpiece of the XVI century. Byzantine Romanesque image of the Virgin of Majesty (twelfth century) was coated silver and is located in a side altar; another important altarpiece frames the image of the Immaculate (seventeenth century). Crossing the old cathedral school, you will reach the Cathedral Museum with its ten rooms filled with reliquaries, objects of worship, processional crosses, altarpieces and images of the Virgin from throughout the diocese.

Other buildings of interest are the Seminary in Astorga, in which Gaudí worked cloister and places such as the Parque del Aljibe. Behind the Cathedral, you will find incredible views over the region and its mountain maragata Teleno.

In the neighboring village of Val de San Lorenzo you can visit a museum Batan and the Interpretation Centre which explains the Communal Textile spinning processes, carding, weaving and textile manufacturing own area. From Astorga you can also go to the west the towns of Maragatería following the Camino de Santiago to the Galician border. It is worth visiting the Polvazares Castrillo 7 kms. At the same distance south along the local direction LE 133 you can visit the Museum of Arriería Maragata in the village of Santiagomillas.