Between the countryside of Jerez and the Serrania lies this spectacular border fortress. It was considered impregnable because of its impressive hill and its fortifications. Today it is among the most beautiful and emblematic villages of Spain. Don’t miss the history and the best things to see in Arcos de la Frontera.

The whole of what to see in Arcos de la Frontera takes up a full day of travel. The getaway can be extended for several more days in various nearby towns. Among the most outstanding are Jerez de la Frontera, El Puerto de Santa María and Medina Sidonia. In the field of nature, the main protagonist is the natural park of Sierra de Grazalema. 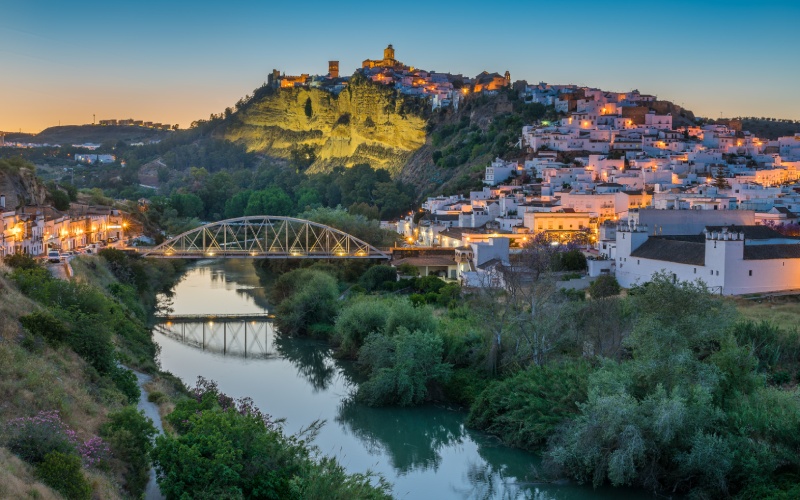 In any case, in the sections sleeping and eating in Arcos de la Frontera are the keys to enjoy the local gastronomy and find the best accommodation. Finally, this village is a great option if you want to enjoy active tourism plans in the province of Cádiz.

A bit of history about Arcos de la Frontera

It is interesting, before moving on to what to see in Arcos de la Frontera, to know something of its history. This is very old, having populations since prehistoric times thanks to its privileged enclave. Arx-Arcis or ‘Fortress in height’ is the Roman syntagma that would end up forming its current name. However, as a colony it was called Coloniae Arcensium. Nearby are the remains of the village known as Santiscal. 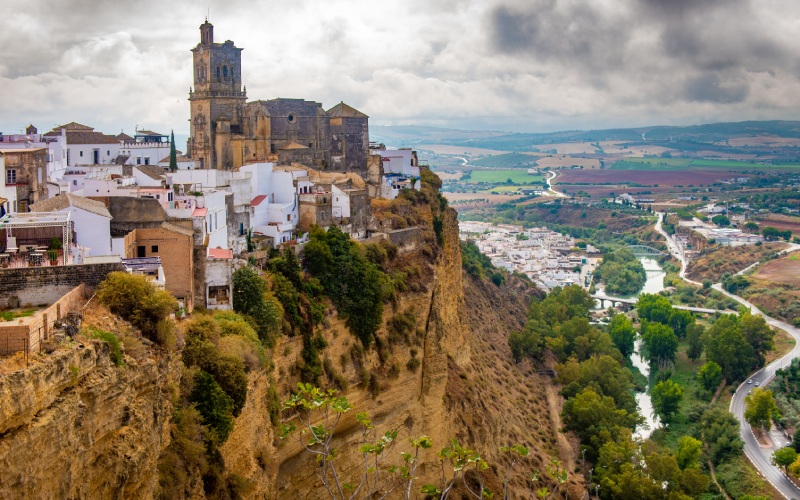 The Muslims gave it the name of Arkos. At that time it belonged to the cora of Málaga. When the Cordovan caliphate broke down in 1012, the Berber family of the Banu Jizrun proclaimed the Taifa of Arcos. This lineage fortified and urbanized the town with a structure still visible in the old walled area. The famous king of the Taifa of Seville, Al-Mutadid took the territory in 1069 as part of his attempt to unify Al-Andalus.

The Muslims gave it the name of Arkos. At that time it belonged to the cora of Málaga. When the Cordovan caliphate broke down in 1012, the Berber family of the Banu Jizrun proclaimed the Taifa of Arcos. This lineage fortified and urbanized the town with a structure still visible in the old walled area. The famous king of the Taifa of Seville, Al-Mutadid took the territory in 1069 as part of his attempt to unify Al-Andalus.

Alfonso X the Wise succeeded in taking it first in 1255 and then definitively in 1264. To ensure its defense he gave it to the Infante Don Enrique, later returning it to royal hands. Around 1300 a local council was organized. Thanks to this, its inhabitants received subsidies and privileges to ensure the fortifications.

From an unconquereable fortress to an isolated tourist resort 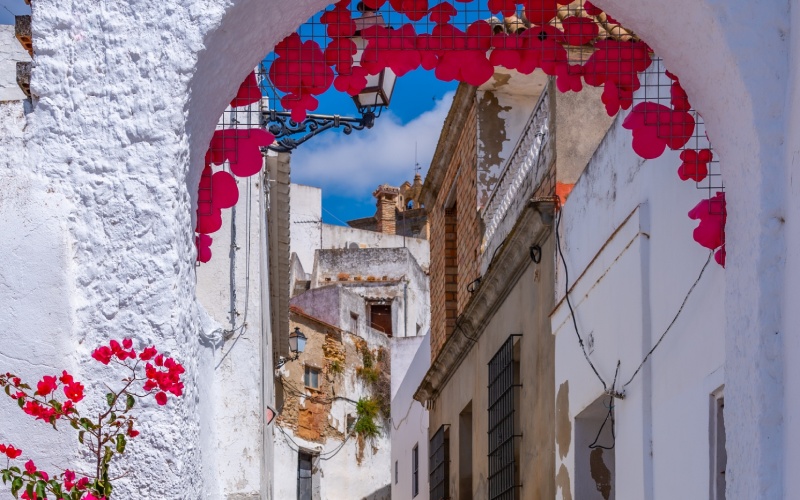 Walking through its streets is just magical. | Shutterstock

By 1408, during the regency of Fernando de Antequera and Catalina de Lancaster, the town was in the hands of the Constable of Castile Rui López Dávalos, Count of Ribadeo. After falling into disgrace, the territory returned to the Crown. It was in 1431 when Juan II created the county of Arcos for Pedro Ponce de León. This nobleman will build the keep of the castle. Later, his successors would adapt it with palatial rooms.

The demographic expansion of the 18th century would motivate the construction, outside the walled enclosure, of two expansions that survive today. These are the Barrio Bajo de San Francisco and the more monumental Barrio de la Corredera. The latter benefited from the preference of the new potentates, who built their mansions there. The Lisbon earthquake of 1755 seriously affected several churches. It also managed to demolish a wall of the castle, covering with the debris its moat, on which the New Street is located.

During the Napoleonic invasion, a French contingent was quartered in Arcos de la Frontera. The Gauls transformed the walls of the castle, causing significant damage. Eventually it would end up integrated into the province with its capital in Cádiz. Today it is a beautiful place to spend a vacation somewhat isolated and, at the same time, stately. 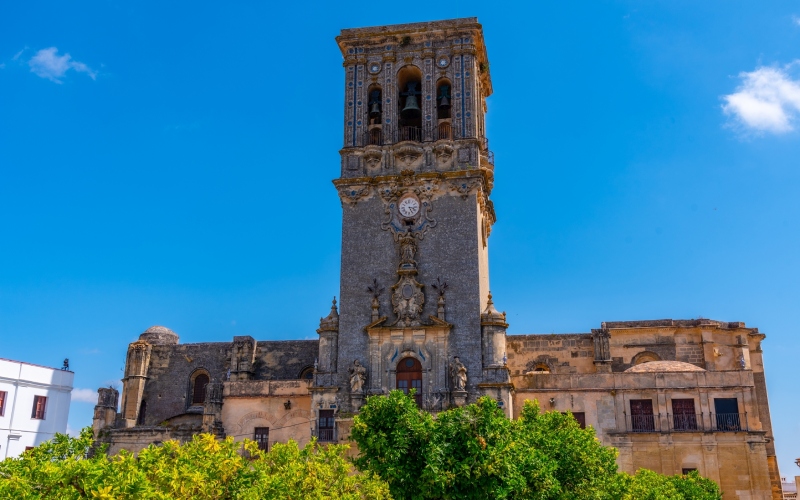 The route proposed here goes from top to bottom. This allows you to expand the visit in the narrow streets as long as you want. Thus the first major landmark to see in Arcos de la Frontera would be the Basilica of Santa Maria. It is easily distinguished among the roofs of the village, rising on a primitive Visigothic temple that was later a mosque. The origins of the present building date back to the reign of Alfonso X the Wise (1264). Constructive elements of its first stage (13th-14th centuries) can still be seen, although its striking front is Gothic-Plateresque. Meanwhile, another of its façades is fully Renaissance.

The great tower of the Basilica of Santa Maria is the result of the baroque reforms promoted after the terrible earthquake of Lisbon in 1755. Inside, the temple keeps a unique Renaissance altarpiece and medieval pictorial decorations. There is also a small museum with liturgical objects. As a curiosity, the building fought over the primacy in the town for years. Settling their differences before the Tribunal de la Rota, the Church of San Pedro lost in the claims. Thus, in 1780 the holder of this one placed a famous image known as The Child of Rome, processed every year during the feast of Corpus Christi. 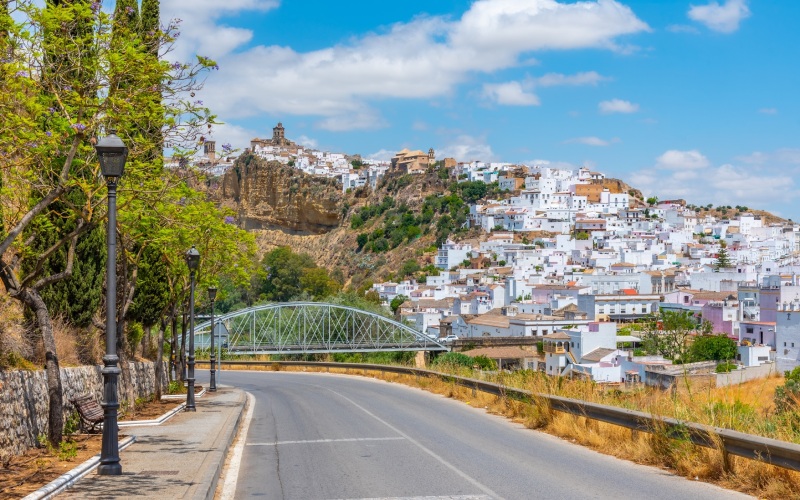 Next to the Basilica of Santa Maria, in the Plaza del Cabildo, there are several notable buildings to see in Arcos de la Frontera. Among them are the Parador de Turismo, the Town Hall (from the 17th century) and the so-called Balcón de Arcos. The latter element consists of a white arch that leads to an excellent viewpoint facing the Guadalete River. Meanwhile, New Street occupies the space of the old moat of the Castle. In fact, it was built directly over it with the remains of the wall after the earthquake of 1755. The castle was rebuilt by the Muslims between the 10th and 12th centuries. It would be the Ponce family who would give it its final form during the XV and XVIII centuries.

Among the oldest civil constructions to see in Arcos de la Frontera is the Conde del Águila palace. Located in the Cuesta de Belen, it still offers a superb Gothic facade of the 14th century. At that time it was the residence of the Adelantado, responsible for security in that area.

Nearby are the Convent of the Incarnation (Gothic) and the Convent of the Mercedarias (Baroque). Both are still inhabited, and the nuns earn their living by selling handmade sweets. Continuing with what to see in Arcos de la Frontera we arrive at the old Church of the Company of Jesus (XVIII). It was built when the Order was expelled from Spain, so it remained unfinished. 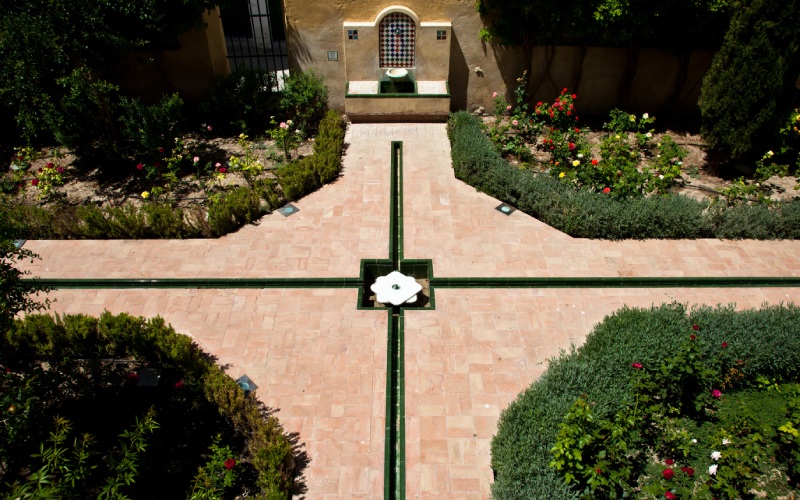 The Palacio del Mayorazgo has a striking Renaissance façade and spectacular courtyards, as well as a highly recommended Andalusian garden. Next door is the Church of San Pedro, an important and eclectic ensemble in which Gothic, Renaissance and Baroque elements can be seen. Its main front is almost an altarpiece in which the effigy of the Apostle stands out. Inside, in addition to the Plateresque altarpiece, the visitor will be surprised by the transparent urns with the remains of San Fructuoso and San Victor. The temple contains some interesting baroque paintings, as well as a valuable organ.

To close the tour of the best of Arcos de la Frontera is the Church of San Francisco, linked to the convent of this Order. However, the main image is dedicated to San Antonio de Padua. The good saint is famous for granting boyfriends to those single women who show their garter, as long as it is in the right place.