The passage of time of some of Spain’s castles has led these iconic fortresses to a gradual ruin. The state of abandonment of many of them has meant that they are now practically ruined castles. Going back in time and imagining that era is undoubtedly an exercise that will help us to understand the reason for these nine magnificent constructions. Recovering in our imagination the imperious appearance they had in medieval Spain is a good tribute to an historical symbol. Are you coming? 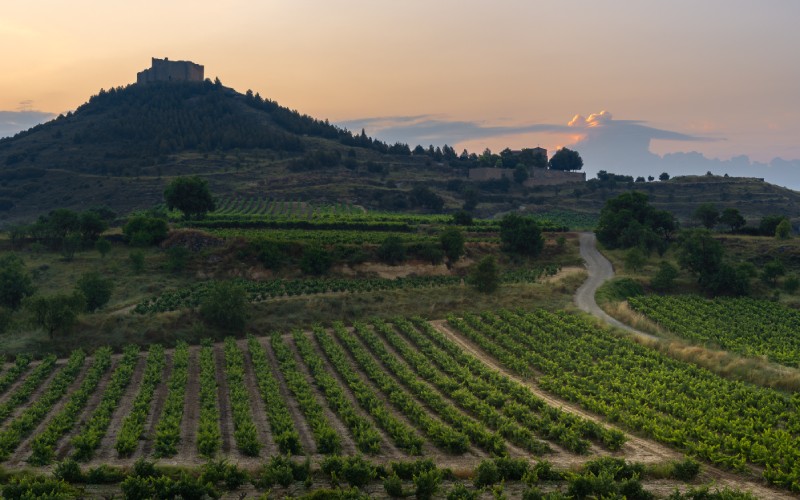 The Rioja vineyard at the foot of Davalillo Castle. | Shutterstock

The Castle of Davalillo, near the town of San Asensio, in La Rioja, had its moments of glory in the numerous battles between the Navarrese and Riojan armies. Although the date of its construction is not well known; it seems that Davalillo Castle originated between the end of the 12th century and the beginning of the 13th century. What seems certain is that it was built after 1177. It is not mentioned by Sancho VII in the list of castles in the area that he made at the request of the English Parliament.

Be that as it may, Davalillo Castle is one of the ruined castles in a serious state of neglect. Just over a year ago, the CVNE (Wine Company of Northern Spain) acquired it after taking it from the local and autonomous administrations after buying it from another important wine company in the area. Perhaps the lack of private investment has led to the complex being neglected; in a way that is unworthy of a historic monument. It is at high risk of collapse due to the fact that the bases of the towers are very uneven.

It is privately owned and cannot be visited for the moment. The castle of Davalillo is one of the most iconic images of the region. Perched on a hill in the middle of the Rioja vineyards, it offers beautiful views of the Rioja Alta. In addition, the deterioration and the aforementioned danger of collapse have meant that the area around the fortress has been fenced off to avoid problems. For their part, the local authorities have warned of the risk of entering the 13th century fortress. 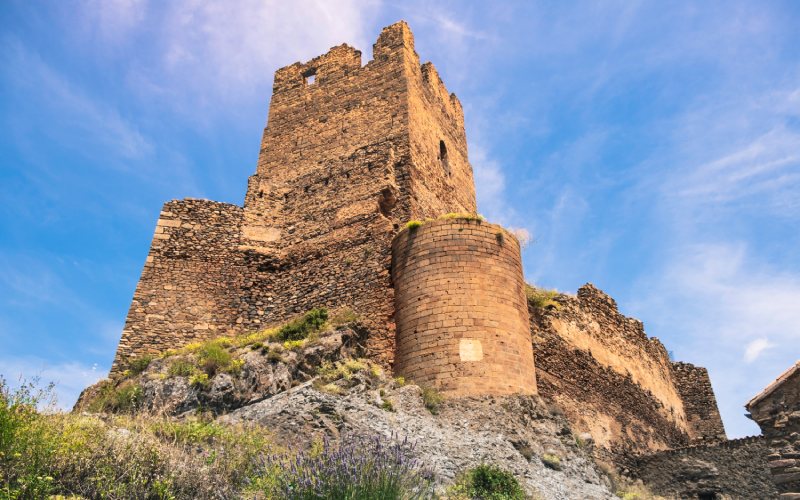 The castle of Vozmediano could have been a Parador Nacional. | Shutterstock

Halfway between Castile and Aragón, the castle of Vozmediano stands on large crags and overlooks the town to which it gives its name, in Soria. A protagonist of the conquest of Alfonso I of Aragón, in 1429 the poet and soldier Iñigo López de Mendoza, Marquis of Santillana, arrived here. Inside the castle itself, between defences, the 15th century writer wrote some of his most famous serranillas.

During the 20th century, the castle of Vozmediano was more in the news than during the Middle Ages. In the 1960s, the then Minister of Tourism, Manuel Fraga, proposed the creation of a Parador Nacional using the fortress in Soria. In order to carry out such an action, the village of Vozmediano had to be incorporated to Ágreda, a nearby locality. However, the inhabitants of the village rejected the proposal, thus signing the death sentence of the castle itself.

Since then, the cemetery it houses has been gaining ground on the fortification; causing the progressive deterioration of the medieval building. For several years, the Vozmediano Town Council, as owner, has been requesting its restoration, but has received no response. Currently, one of the towers of the castle has significant cracks; causing part of the wall to collapse in 2018. For several years, it has been included on the red list drawn up by Hispania Nostra among other ruined castles. 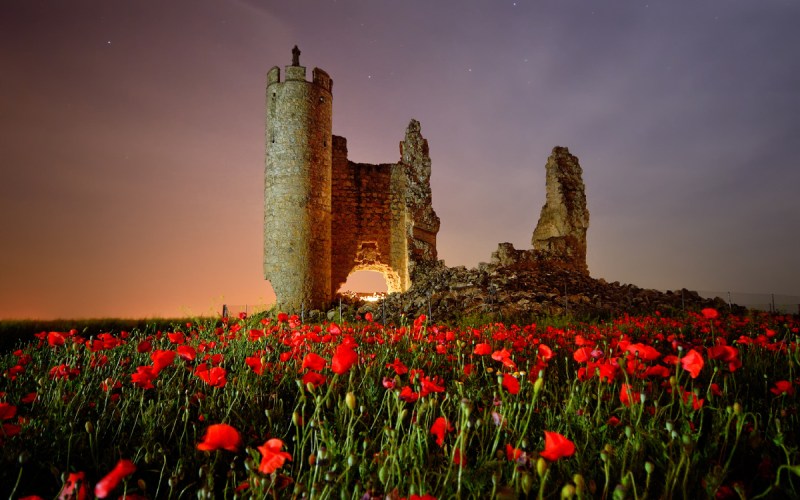 The Castle of Rivadeneyra at night. | Shutterstock

Rivadeneyra Castle is perhaps one of the best known and most representative of the region. In the north of the province of Toledo, this 15th century fortress stands on the outskirts of the now uninhabited village of Caudilla. This castle, which is more pictorial and stately than military in appearance, served as the residence of Fernando de Rivadeneyra. It withstood the attacks suffered by the army of Henry IV; due to the rivalry he had with his brother Alfonso for the kingdom of Castile.

It is in a very poor state of preservation like other ruined castles. Its few remains suffered a further setback when, in 1999, the main façade collapsed. Some popular initiatives have tried unsuccessfully to refurbish the building. For example, in 2018, a distillery used the name Castillo de Caudilla as a lure to produce a whiskey. However, the project, which was intended to use the proceeds from the sale of the drink to refurbish the castle, failed.

Thus, there are few expectations for the dilapidated castle. Today it is privately owned and there are no known actions related to the preservation or refurbishment of the building. In the meantime, the fortress is witness to curious onlookers and tourists who, camera in hand, take beautiful pictures of the area and the castle. Access to the enclave is easy via the motorway between Maqueda and Toledo. 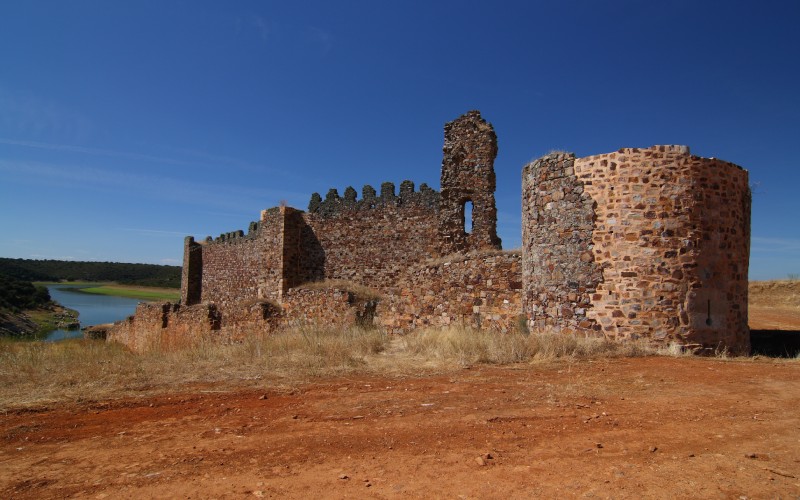 The castle of Castrotorafe with the river Esla as witness. | Shutterstock

Next to the river Esla, in the uninhabited village of Castrotorafe, Zamora, the castle must have been built before 1319, according to the will of Juan de Castilla. Its privileged location, on the border between Castile, León, Portugal and Galicia, made this fortification of great military and strategic value. The construction had a large moat, traces of which still remain today, and it seems to have stood on a small hill, from where it controlled the town of Castrotorafe.

According to records, is one of the ruined castles that fell into oblivion at the end of the 17th century. After more than two centuries in a state of abandonment, in 1931 the ruins of Castrotorafe were declared a National Monument. However, since 2009, with funding from the Zamora Provincial Council, work has been carried out to conserve and consolidate the walls. However, it seems that the current work appears to be unprofessional and is causing serious damage. In fact, the first work to clear the remains caused the collapse of one of the defensive cubes.

One of the great attractions of these ruins is the bridge. When the waters of the reservoir of the River Esla are at low levels, it is still possible to see what was once the viaduct that served as a connecting link. Halfway between Zamora and Benavente, the village and castle of Castrotorafe offers beautiful views of the reservoir and its surroundings, making it a perfect excursion near the border with Portugal. 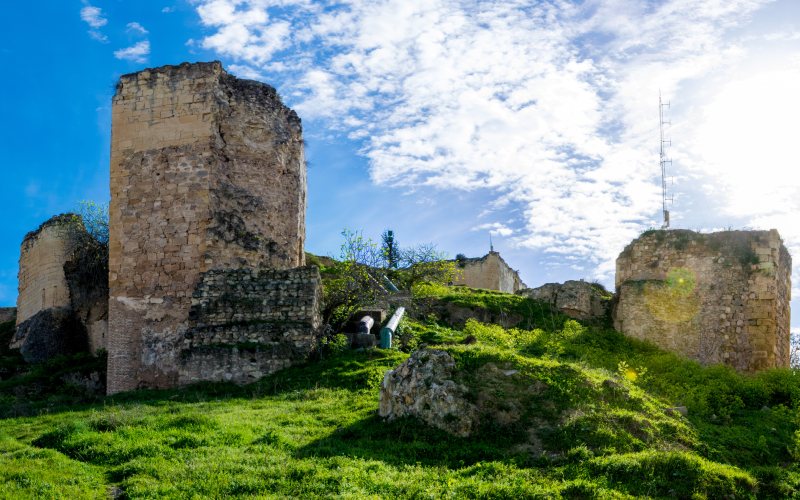 The deficiencies of the castle of Morón de la Frontera are visible. | Shutterstock

One of the ruined castles with most history. Since its construction in the 11th century, when Morón was a Taifa kingdom, the Moorish castle has witnessed the Reconquest, Napoleon’s troops and even the Civil War. All these eras have been judge and jury of the deterioration of this fortification; which today is in serious danger of collapse without much concern for local authorities or private investment.

Perched on a hill in Morón de La Frontera, its keep is still visible. One of the great curiosities of this fortification is the multifunctional aspect it has had over time. On the border between Cádiz and Seville, the castle was one of the most important defensive posts in the south. In addition to its military service, the construction has also served as a noble residence; but during the post-war period it also sheltered more than 100 families crammed into shantytowns. 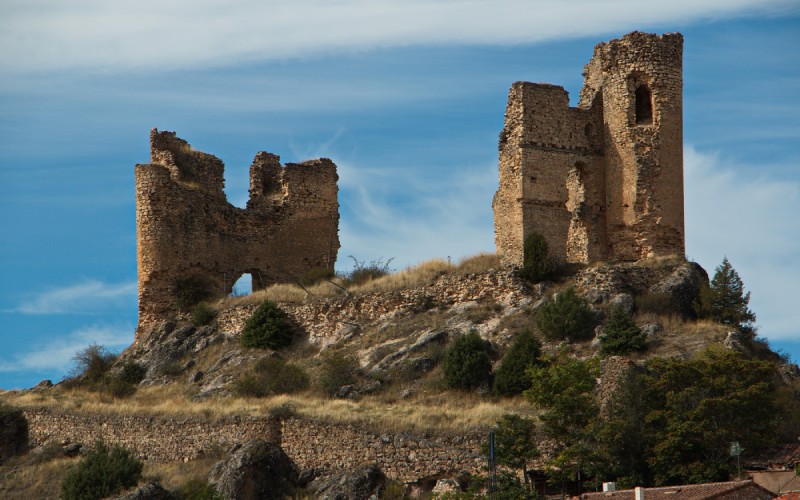 Surrounded by wildlife and nature, Pelegrina Castle dates from the 12th century. Watchtower of the whole valley on the river Dulce, in 1710 it was the victim of a fire during the War of Succession. However, this heritage site in Guadalajara was later rebuilt. Likewise, in the midst of the War of Independence, it was dismantled by Napoleon’s troops; so that it would not serve as a refuge for the guerrillas commanded by El Empecinado.

In the province of Guadalajara, near the A2, the enclave of the Río Dulce offers a complete trip with beautiful views. During the 1970s, the whole of the Barranco del Río Dulce nature reserve was witness to the experiences of Félix Rodríguez de la Fuente and his documentary series El Hombre y La Tierra. In fact, you can still visit the hut where they kept the materials and everything necessary for the filming.

The castle of Torre Salvana, popular among those who enjoy the paranormal. | Shutterstock

This construction above Baix del Llobregat is one of the most popular ruined castles among fans of paranormal and psychedelic effects. Dating from around 992, this advanced defence tower was severely damaged during the Catalan revolts of the 13th century; being destroyed in many areas. Its current appearance is the result of several alterations throughout its history. Of Romanesque origin, there have been Gothic modifications to its structure.

The Torre Salvana is next to the town of Santa Coloma de Cervelló, a few kilometres from Barcelona. The building is in a state of considerable ruin and neglect. It has suffered acts of vandalism and despoilment that have left the fortress unrecognisable. In fact, hardly any architectural vestiges of its origin remain. The social neglect it suffers is perhaps to feed the gossip and legends about the spectral scenes that are said to have taken place there. 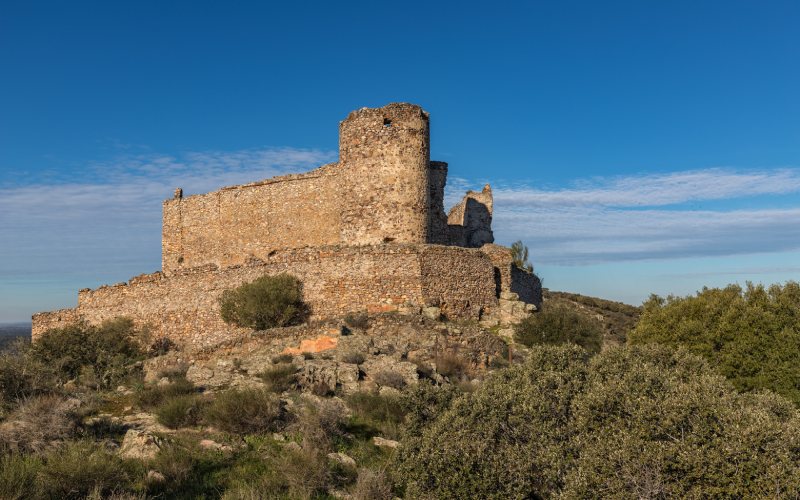 The Castle of Portezuelo has undergone renovations improper for a BIC. | Shutterstock

Portezuelo Castle, in the province of Cáceres, is the example of how not to restore a historic monument; such as ruined castles. From the Muslim occupation, the fortress served in the High Middle Ages to stop the Christian advance. Throughout its long history, the castle has been the victim of numerous attacks, as many as reconstructions. Although it is classified as an Asset of Cultural Interest (BIC), it is in a ruinous state. Moreover, it has recently suffered the collapse of one of its towers. As mentioned above, the restoration work is a disaster and is out of harmony with the history of the building. 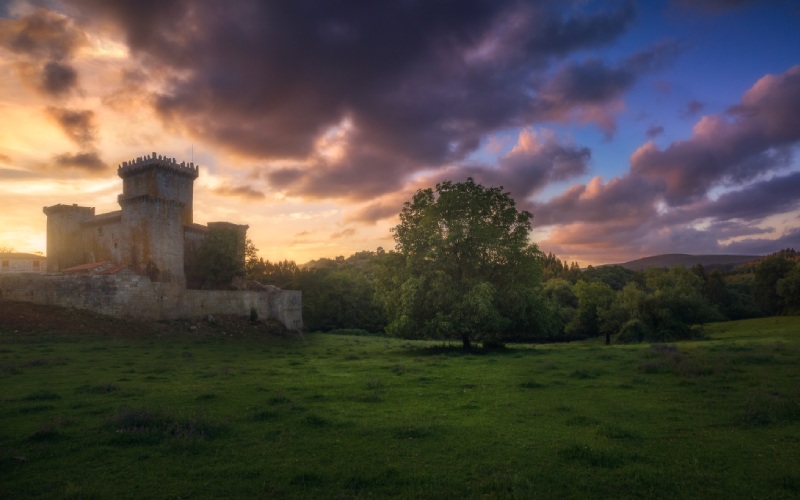 Pambre Castle is an example of restoration. | Shutterstock

Of the more than 3,000 fortresses that, according to the Spanish Asociación Española de Amigos de los Castillos, are ruined castles, Pambre Castle is a clear example of good work. This fortress, located in the province of Lugo, has achieved part of its splendour thanks to the public funding; not long ago abandoning its state of consolidated ruin.

However, despite being one of the best preserved castles in Galicia, Pambre has suffered significant deterioration. This has led the Xunta to invest in it heavily. In addition, privately owned until 2012, the neglect of its last tenant caused the keep to suffer damage and vandalism; that have been very close to making the restoration irreversible.

These castles have succumbed to ruin. Another example is that of Granadilla, in Cáceres. It shared its fate with a village that was forced to be abandoned; due to the construction of the Gabriel y Galán reservoir. Fortunately, unlike these listed ruined castles, the town is being reborn in a very curious way; part of what we call Revenant Villages. Do not miss this series of reports on the life and death of certain Spanish towns and villages!

archaeological sites, castles, Middle Ages, Romanesque
It may interest you...

A-1, what you cannot miss on the road to Burgos
TOf the large Spanish radial highways, the A-1 has the task of connecting the capital Más información