The province of Cádiz is a perfect mix of sea, mountains and, of course, villages that are authentic wonders. From towns on the coast to others perched on a mountain, this area of Andalusia is full of beaches, monuments and natural landscapes that will leave visitors with their mouths open. In addition, many of the most beautiful villages of Cádiz belong to the route of the white villages. 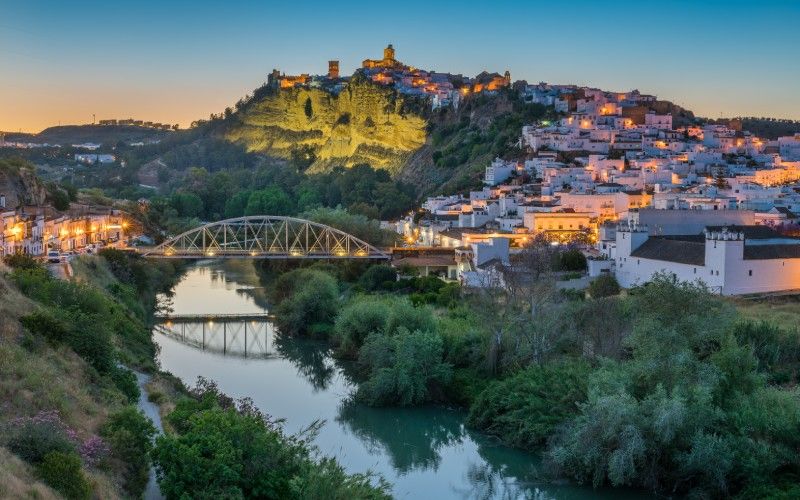 Arcos de la Frontera is one of those villages that are part of the white villages, so it is an obligatory stop on a visit to this province. As one approaches the village it is striking that it is located on a large rock, which provides spectacular views of the town from the road.

Such is its rich heritage that it has been declared a National Historic-Artistic Site. Among its monuments are the Basílica Menor de Santa María de la Asunción, the Church of San Pedro, the Convent of the Mercedarias and the Castle of Arcos de la Frontera. Also, from the Plaza del Cabildo there are incredible views of the surrounding area. 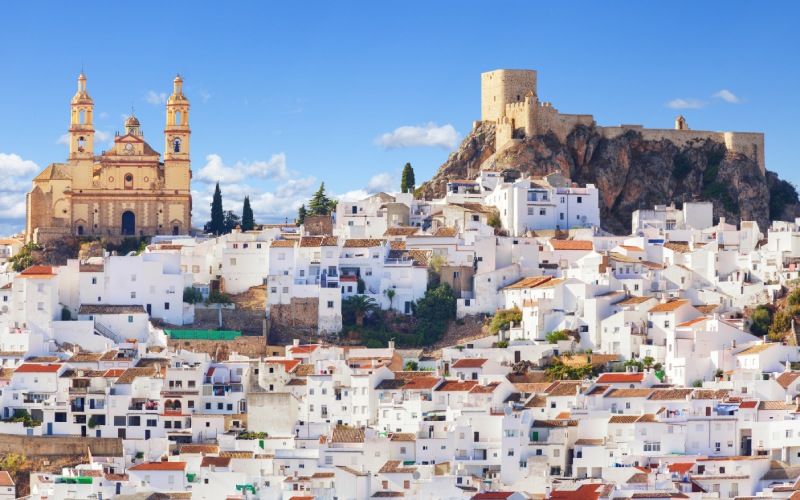 Located in the Sierra Norte de Cádiz, Olvera is a village of Muslim origin. It has a lot of charm due to its white houses decorated with flowers and its narrow streets that climb towards the monumental complex. In fact, one of the best known points of the town is the Calle Calzada, which is characterized by being especially steep.

As for monuments, the church of Nuestra Señora de la Encarnación, the Villa neighbourhood and the Moorish castle are the places in Olvera that no visitor should miss. In addition, from the Plaza de la Iglesia there are very good views of the olive trees. 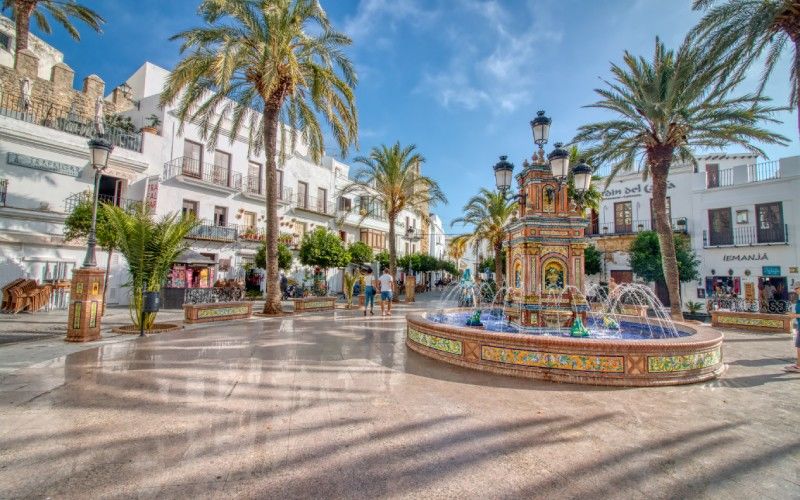 Also with its characteristic white houses, Vejer de la Frontera is undoubtedly one of the most beautiful villages of Andalusia. Phoenicians, Carthaginians, Romans, Muslims, Jews and Christians passed through there, so it has a great historical legacy to show.

Speaking of places to see, the Church of the Divine Savior, the walls with houses attached to it, the castle and the Plaza de España are a must-see. In addition, it is also worth spending time to see the Museum of Traditions and Customs of Vejer, in the Convent of the Conceptionists, and to walk through the Jewish quarter. 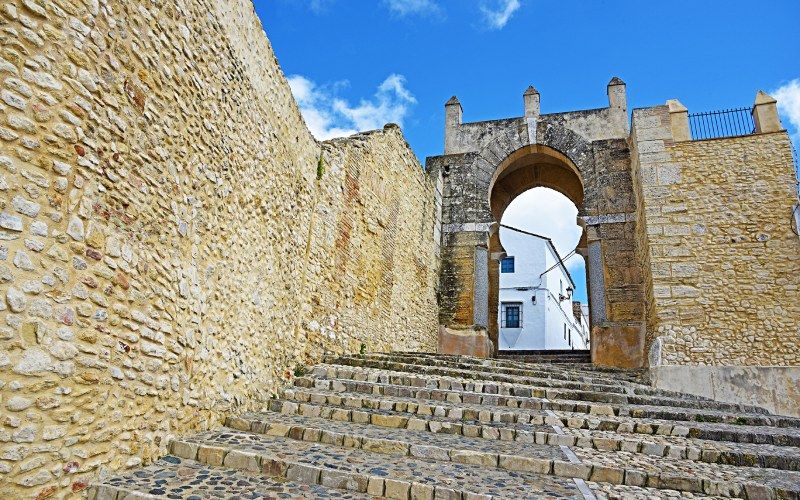 Just by hearing its name, visitors take a trip back in time to past centuries, and Medina Sidonia is one of the oldest towns in Spain. The Arco de Belén, the Arco de Pastora and the Puerta del Sol were once some of the access points to the town and today they are frequently photographed tourist attractions.

Likewise, the Medina Castle, the Church of Santa María la Mayor la Coronada and the Church of La Victoria are some of its most outstanding buildings. As for museums, you can visit the Archaeology Museum, which is a trip to ancient Rome, and the Ethnographic Museum, which shows how the inhabitants lived centuries ago. 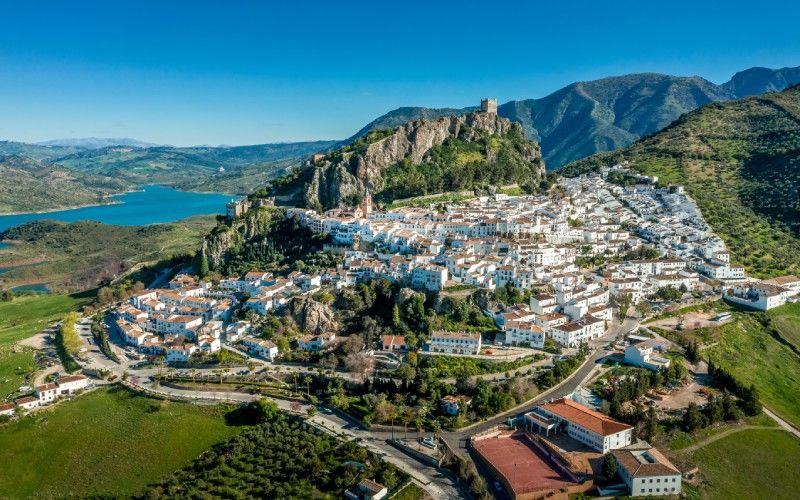 Located in the Natural Park of the Sierra de Grazalema, Zahara de la Sierra is another of the most beautiful villages of Cadiz. It has been declared a Historic-Artistic Site and is also part of the route of the White Villages of Cadiz. In addition, it is located on a hillside, on top of which you can enjoy its castle.

As for places worth a visit, the Plaza Lepanto, Ronda Street and the Chapel of San Juan de Letran are places with a lot of charm. Also noteworthy are the Clock Tower, the Plaza del Rey, the Church of Santa María la Mesa and the Garganta Verde. 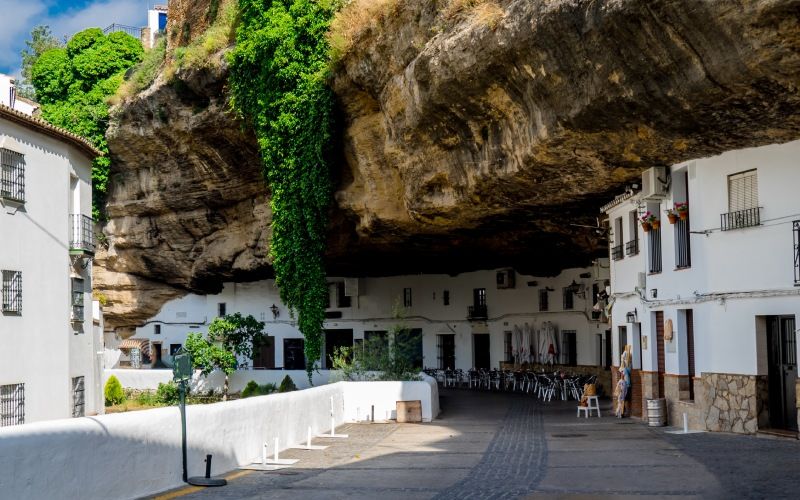 If there were a ranking of the most surprising villages in Spain, Setenil de las Bodegas could be perfectly in the first position. And it is not just because it is a beautiful town, but because it is located in the canyon of the Trejo River and many of its houses are built under an overhang of the giant rock.

Your visit can consist of a nice walk along its famous Calle Cuevas del Sol, but also along the Calle Cuevas de la Sombra, the Plaza de Andalucía and the Calle Calcetas. It also has impressive viewpoints where you can get great views of Setenil de las Bodegas. 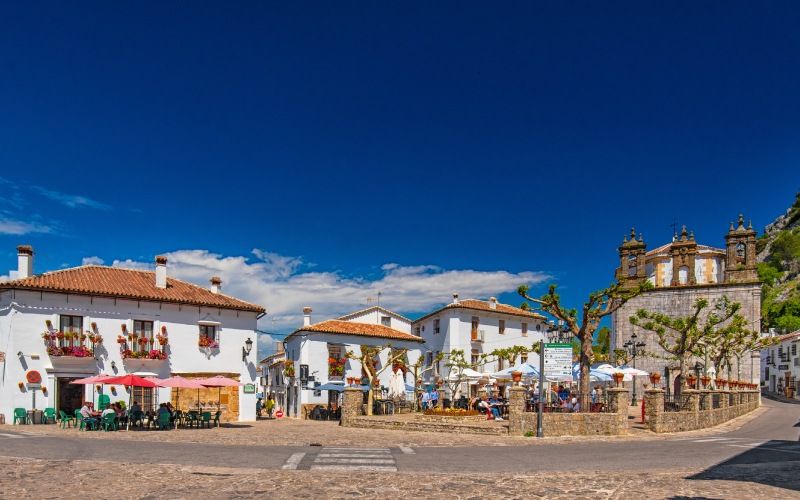 As its name suggests, this village is located in the Sierra de Grazalema, one of the most beautiful natural sites in Andalusia. From before arriving, you can get wonderful views of Grazalema from the Asomaderos viewpoint. From there you can also see the sierra.

Once there, some of the monuments to visit are the church of Nuestra Señora de la Encarnación, the Plaza de España, the Ermita del Calvario or the Calle Las Piedras. The Mirador El Tajo or the Mirador Los Peñascos can be a good way to finish the visit seeing a panoramic view of the town from the heights. 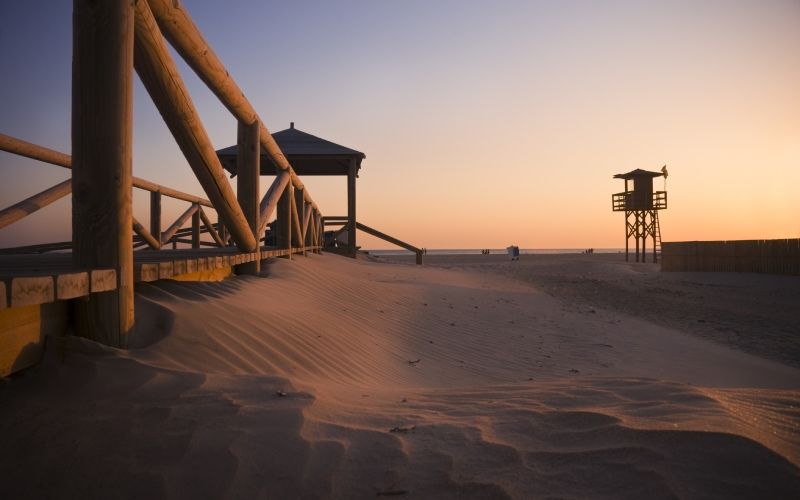 Conil de la Frontera is a favorite vacation destination for many Spaniards, as it stands out for its beaches. Some of them are the Fontanilla beach, the Aceite cove and the Roche coves. Here you can swim, dive, surf or just sunbathe.

However, in the historic center of Conil de la Frontera, with a Muslim past, there is also much to see. Highlights include the Church of Santa Catalina, the Tower of Guzman or the Puerta de Cadiz. It is also a town known for its good gastronomy. 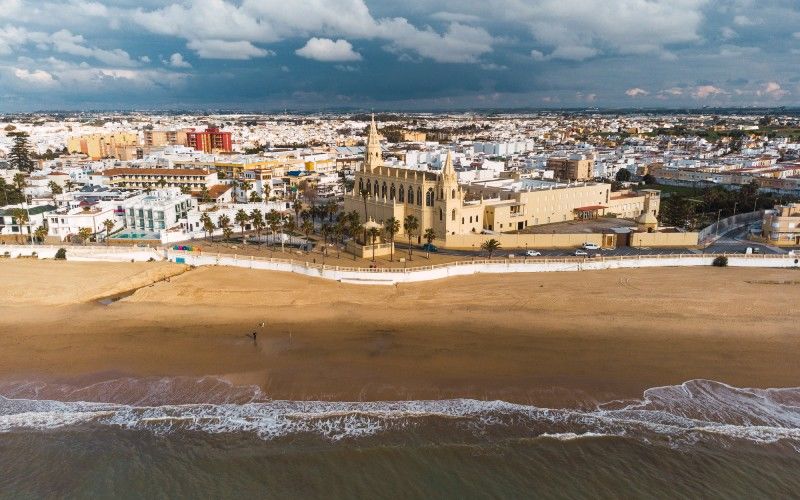 Chipiona is another of the towns on the coast of Cádiz that in summer triumphs among tourists who love the sea. Its best known beaches are Niño de Oro, Micaela, Cruz de Mar, La Laguna and Tres Piedras, some of which are Blue Flag beaches. In addition, Chipiona is full of narrow streets with low white houses among which walking is a pleasure.

Among its monuments are the lighthouse of Chipiona, which is the highest in Spain, and the Sanctuary of Nuestra Señora de Regla, which surprisingly in another era was a defensive fortress. You can also visit the pine forest of Chipiona, which can be reached through greenways. 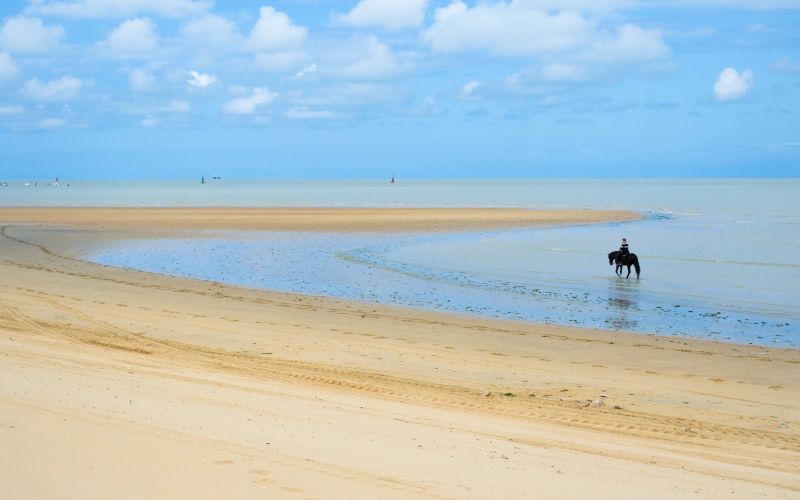 Sanlúcar de Barrameda is one of those towns that are always full of life. There you can enjoy natural sites such as the Doñana Marshes and the mouth of the Guadalquivir River.

Going for tapas, watching the sunset, visiting a winery, seeing the Santiago castle or watching the people go by in the Plaza del Cabildo are some of the best things to do in Sanlúcar de Barrameda. Of course, you can also go to the beach in one of the most beautiful towns in Cádiz. 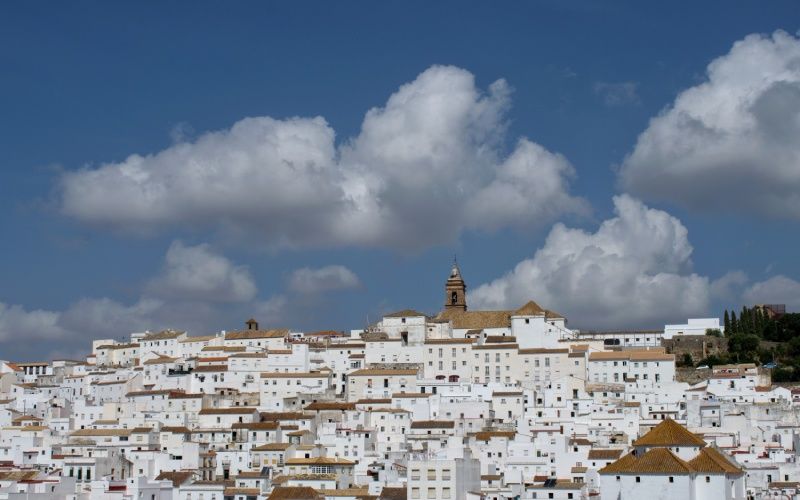 You can not finish this review of the wonders of the province of Cádiz without first passing through Alcalá de los Gazules. It is a town located in the Sierra de Cádiz. It is a Historic-Artistic Site and is part of the Toro route.

It also stands out for its castle, the Church of San Jorge and its two archaeological sites: La Taja de los Hierros and La Mesa del Esparragal. Finally, it is important to mention that there are numerous hiking trails in the surrounding area.

In conclusion, for those who still do not know this area of Andalusia, you can start by discovering the most beautiful villages of Cádiz. Undoubtedly, it is a province full of towns that are worth a visit.