The wine and horse city

Jerez is  known worldwide for its wine and horses, which, paired together with its fairs, wine cellars, flamenco festivals and tauromachy, complete the attractions of this gorgeous city.

There are a lot of things to do in Jerez de la Frontera, so it takes at least a couple of days to be properly enjoy a complete visit. If you plan to stay for a longer period, you may want to visit the nearby towns of Cádiz, Chipiona or Arcos de la Frontera. If you are a nature lover, we recommend visiting the Bay of Cádiz Natural Park in the south.

What to see in Jerez de la Frontera

A good start to your visit in Jerez is the old city, where you can see the remnants of the Almohad trace in the Fortress of Jérez (12th century). Both its octagonal tower and the inside of Mosque, converted into what is known today as the Santa María Chapel, stand out. The Arab baths are well preserved as well. Furthermore, we would like to highlight the Villavicencio Palace (18th century) and its Dark Room where you can enjoy an amazing panoramic view of the city.

The Cathedral (17th-18th centuries) stands out because of the Ánimas and Cristo de la Viga chapels, as well as a Zurbarán painting.

The magnificent building of the Cartushian Monastery of Santa María de la Defensión (15th and 18th centuries) has a beautiful classicist frontside, a Gothic style decoration on the inside, and an amazing chapel that houses the image of the virgin and the altarpiece with Roelas’ paintings.

In the Merced Basilica (17th-18th centuries), you will find the image of the patron saint in a curious silver small temple that guards the remains of the dictator of Spain from 1923-30, Miguel Primo de Rivera, who was from Jerez. The Carmen Basilica, which has a huge Baroque style façade, houses the Museum Carmelitano de la Provincia Bética (beautiful paintings and sculptures). Do not forget to pay a visit to the Claustros de Santo Domingo Gothic complex (15th century). If you time your visit well, you will see the commemoration of San Dionisio, patron saint of the city, in the “Rooster’s tail” parade in the San Dionisio plaza.

Plenty of palaces can be visited in Jerez de la Frontera, all of which are named after important figures of the history of the city: Domecq (18th century), Pérez-Luna (18th century), Riquelme, Dávila (Renaissance style), Camporreal (Neoclassic style), and Duque de Abrantes (19th century, housing the Royal Equestrian School from Andalusia and the Equestrian Arts Museum). 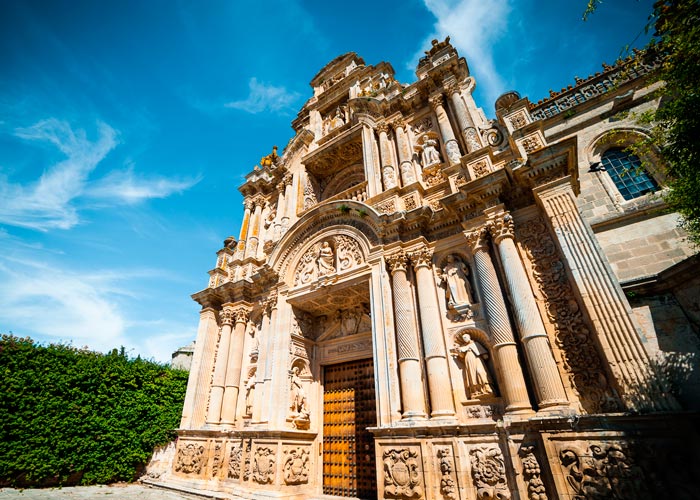 The Old Town Hall (16th century), situated in the Asunción Plaza, is known for its façade decorated with Renaissance style allegories. The Atalaya Tower (15th century) is known by its famous clock and bell tower, which have been traditionally associated to the time when the Muslims surrendered to Alfonso X. Some other important buildings in the city are the Blue Rooster (20th century), from the Domecq’s family, as well as the Bull Ring (19th century).

Wine cellars are definitely worth visiting in Jerez. In one of Willliams-Humbert’s cellars, you can visit the Museum of Jerez. Grupo Estévez’s wine cellar shows a background influenced by Pablo Ruiz Picasso (Suite Vollard Museum), and Bodegas Tradición shows the most important works by Joaquín Rivero.

The history of the city can be understood by visiting the Archeological Museum of Jerez, situated in the Market Plaza. The wine tradition of Jerez is explained in the Theme Center of La Atalaya. Finally, there is a Museum of Tauromachy explaining the importance of that tradition for the people of Jerez.