The essence of one of the most important buildings of all Muslim architecture is enhanced with excellent syncretism in the Christian temple. That is why it has deserved to be declared a World Heritage Site.

Plan your stay in the Mosque-Cathedral of Córdoba

It can take about two hours the tour of everything there is to see in the Mosque-Cathedral of Córdoba. The rest of the trip should continue through the city of Córdoba. You can find wonderful places to eat and where to sleep.

History of the Mosque-Cathedral of Córdoba

On Roman remains, in the V century the Visigoths built a Christian basilica dedicated to the martyr Saint Vincent.

In the year 786 work began on the mosque by order of the Emir Abderraman I, who had previously bought the site from the Christians. The original temple pretended to be a forest of columns as it had up to eleven longitudinal naves of twelve sections each and made use of the capitals and shafts of the Christian buildings. The most curious thing was the use of the solution of a double horseshoe arch and a round one whose voussoirs offer the, at that time, remarkable height of ten meters. It provokes in the spectator a spectacular chromatic effect of enormous beauty. The work was completed two years later. The unusual orientation of its quibla –towards the south instead of towards Mecca– may be due to the decision to take advantage of the foundations and materials of the Christian building.

Emir Hisham I will be the one to undertake the following major works: the construction of the indispensable minaret (not preserved) and the completion of the execution of the sahn or courtyard.

In 833 Abderraman II faced the first expansion of the mosque, but he would not see it completed. His successor culminated it in the year 855. To achieve a greater capacity, the primitive quibla had to be destroyed; the old arcades were enlarged by up to eight sections, using elements of previous buildings and also others made to measure, as the famous capitals of pencas. He also ordered the improvement of the courtyard.

Abderramán III considerably enlarged the Court of Oranges and replaced the primitive minaret with a 34-metre high one; this is the one that –remodelled as a bell tower by the architect Hernán Ruiz III in the 16th century–we can see today. 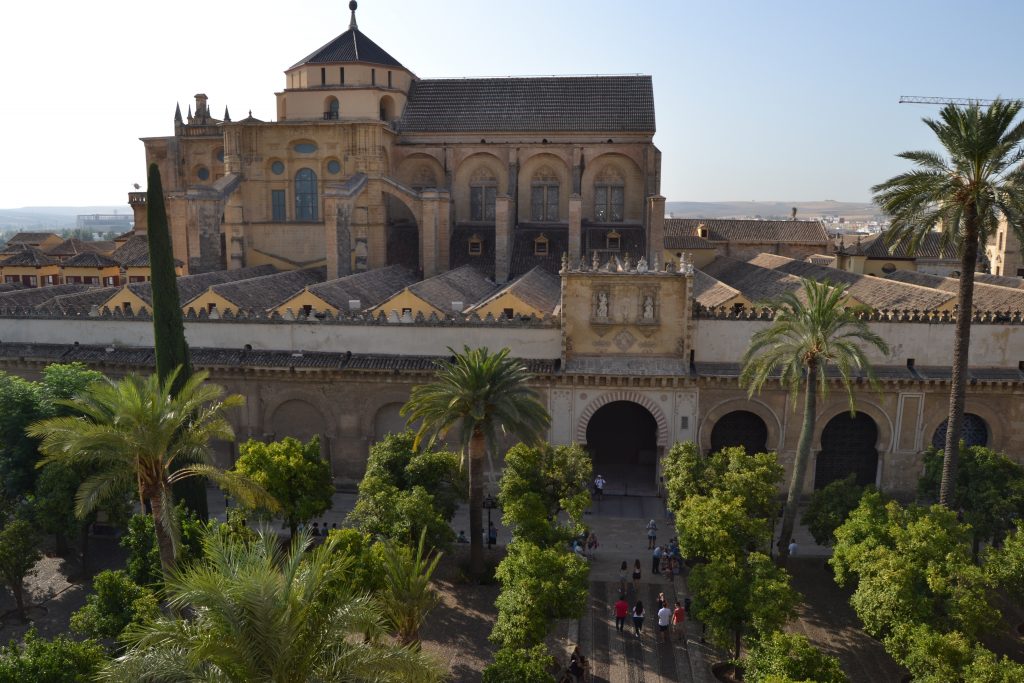 In the 10th century Caliph Alhaken II ordered to remove the sacred wall and to enlarge the prayer room to the south with twelve crosses; the double wall of the quibla was also added. Beautiful marble from quarries in Córdoba itself and from Cabra was used in the work. Likewise, four skylights crowned by ribbed domes were built and the wall of the quibla was enriched, whose niche is now almost a room with profuse decoration where the Tree of Life is represented. Byzantine craftsmen –sent by the Emperor Nicephoros II of Byzantium– covered the facade of the mihrab and the previous spaces with tesserae.

But at the end of that same century the feared Almanzor decided to widen again the mosque towards the east, adding eight more naves.

From Mosque to Cathedral

In June 1236 Córdoba surrenders to King Ferdinand III the Saint, and its Muslim inhabitants leave the city. Reversing the decision of 786, the mosque becomes a Christian temple and cathedral. In those first years, essential adaptation works were undertaken. In 1371, work was completed on the Capilla Real, where the bodies of Ferdinand IV and Alfonso XI were buried. The Capilla Mayor was housed at that time under one of the skylights of Alhakén II until a new one was built in 1489, more suitable for Christian worship.

Carlos I authorized the bishop Alonso Manrique to remove some elements, without altering the spectacular enlargement promoted by Alhakén II. Thus, in 1523 the reforms of the magnificent Burgos architect Hernán Ruiz I, his son Hernán Ruiz el Joven and his grandson Hernán Ruiz III began. Juan de Ochoa tackled the material execution of the well-known dome that covers the transept in Mannerist style. The second of the Ruiz family gave the new church a distinctly classicist appearance.

The sixteenth century floor plan is a Latin cross, with naves covered with vaults still Gothic, powerfully draws attention to the dome designed in the Renaissance. In the following years many chapels were added, sponsored by bishops and nobles.

What to see in the Mosque-Cathedral of Córdoba

As we begin the visit to the immense mass of the Mosque-Cathedral of Córdoba we notice how the church emerges –in the central part– between numerous and simple naves. In its austere façades, only the access gates in the west, east and north stand out.

In the western area is the Puerta de los Deanes, which still preserves vestiges of the primitive building from the 8th century and which is a contemporary of that of San Esteban (8th-9th century). From the extension of the mosque by Abderraman II, the Puerta de San Miguel is visible, slightly modified in the 16th century. The doors, now called Espíritu Santo, el Palacio and San Ildefonso, are very similar to each other as they are the result of the enlargement of Alhaken II. From the same period is that of the Sabat, which gave access to the Alcazar. In addition, the Postigo de la leche, designed by the architect Hernán Ruiz I, is preserved.

On the east side there are nine other entrances to the Mosque-Cathedral of Córdoba, especially the Grada Redonda (1738), in Churrigueresque style, and Santa Catalina (XVI century), in Renaissance style by Hernán Ruiz el Joven. The rest are practically the same thanks to the restoration work carried out by Ricardo Velázquez Bosco a century ago and are called San Juan, El Baptisterio, San Nicolás, La Concepción Antigua, San José, El Sagrario and Jerusalén.

On the northern wall there are only the Puerta del Perdón, with its spectacular horseshoe arch, reformed in 1371; and the Puerta del Caño Gordo (16th and 18th centuries), very close to the fountain of the same name.

In the visit to the interior of the Mosque-Cathedral of Córdoba, the main altarpiece of marble (17th century), from Alonso Matías, is worth mentioning. The tabernacle (1653) was designed by Sebastian Vidal. In the hollows there are paintings, among which the Assumption painted by Palomino in the second decade of the eighteenth century.

The spectacular choir stalls, designed by Pedro Duque Cornejo, and the rich pulpits, made of marble and mahogany wood, date from the 18th century.

The Capilla Real was promoted in 1371 by King Henry II to house the remains of his father, Alfonso XI, and his grandfather, Ferdinand IV. Of its Mudejar architecture, the great multifoil arch and the decorative profusion on its walls stand out. In the Capilla de la Coversión de San Pablo is the tomb of the Master of the Order of Santiago, Fray Pedro Muñiz de Godoy. It was decorated in the 17th century with images of the Church Fathers and Saint Paul.

The complex star vault of the Capilla de Villaviciosa gives it a grandiosity that may have caused the decision to use it as a high altar since 1236. At the end of the 15th century the great Gothic transverse arch was built. It ceased to be used as a high altar in 1607. Its current name is due to a sculpture of Our Lady of Villaviciosa.

Between 1507 and 1627, chapels were built on the northern wall, such as those of the Santísimo Cristo del Cautivo, with a curious column from the time of Almanzor with an engraved cross; and that of the Cordovan martyr San Eulogio, and the area devoted to narrating the martyrdom of San Esteban. 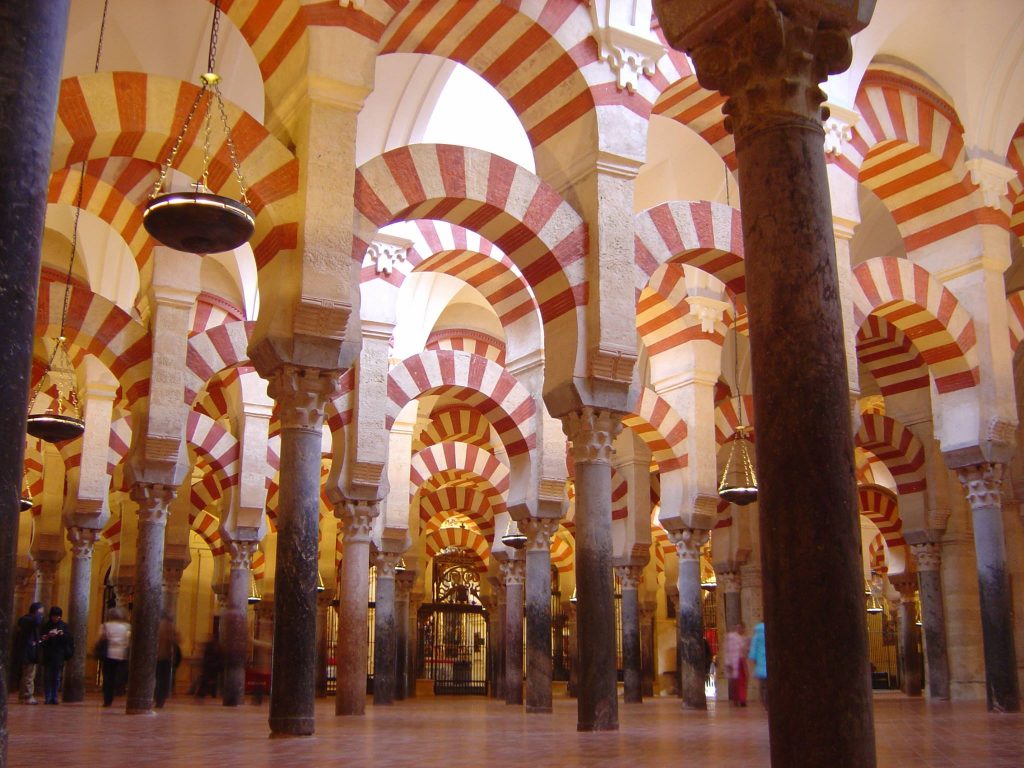 Interior of the Mosque-Cathedral of Córdoba

On the southern wall of the mosque was the quibla. Chapels were built there, such as Santa Teresa and the Main Sacristy of the Cathedral (1697-1703), in whose crypt is the magnificent tomb of Cardinal Salazar. The Capilla de San Clemente, founded by Alfonso X the Wise in 1262, is covered by beautiful vaults. The Sagrario was located in the old bookstore in the 16th century. It has a classicist facade, three naves with Gothic ribbed vaults and some frescoess.

On the eastern wall is the Capilla del Espíritu Santo (16th century), with a beautiful stone altarpiece that includes an oil painting of the Baptism of Christ. Also of interest is that of San Juan Bautista (1260); with a 16th century altarpiece that combines sculpture and painting. And the chapel of the patron saints of Córdoba San Acisclo and Santa Victoria (16th century).

On the western wall are the Capilla de la Santísima Trinidad, with a spectacular grille from the end of the 15th century, and the Capilla de Nuestra Señora de la Concepción (17th century); with the altarpiece designed by Melchor de Aguirre in 1680. The Capilla de San Pedro has an altarpiece with a miracle by the apostle.

Among the pieces of the magnificent Cathedral Treasure (housed in the Capilla de Santa Teresa) the well-known Custodia del Corpus Christi that Enrique de Arfe made in the 16th century stands out; curiously, it represents a Gothic cathedral. A magnificent ivory crucifix is also kept there because of Alonso Cano. This is the most outstanding thing in our opinion of the Mosque-Cathedral of Córdoba.