Choosing the most beautiful villages in Palencia is a real challenge, as there are several hidden gems in this province. Located in the north of Castile and León, it is still unknown to many travellers despite the fact that it has always been a transit area. Even the Way to Santiago passes through it.

In this province the villages follow one after, many of them declared Historic-Artistic Complex due to their rich heritage. Villages with emblematic monuments or with beautiful natural surroundings that help to enhance them. These are the most charming villages in Palencia, you have to visit at least once in your life. 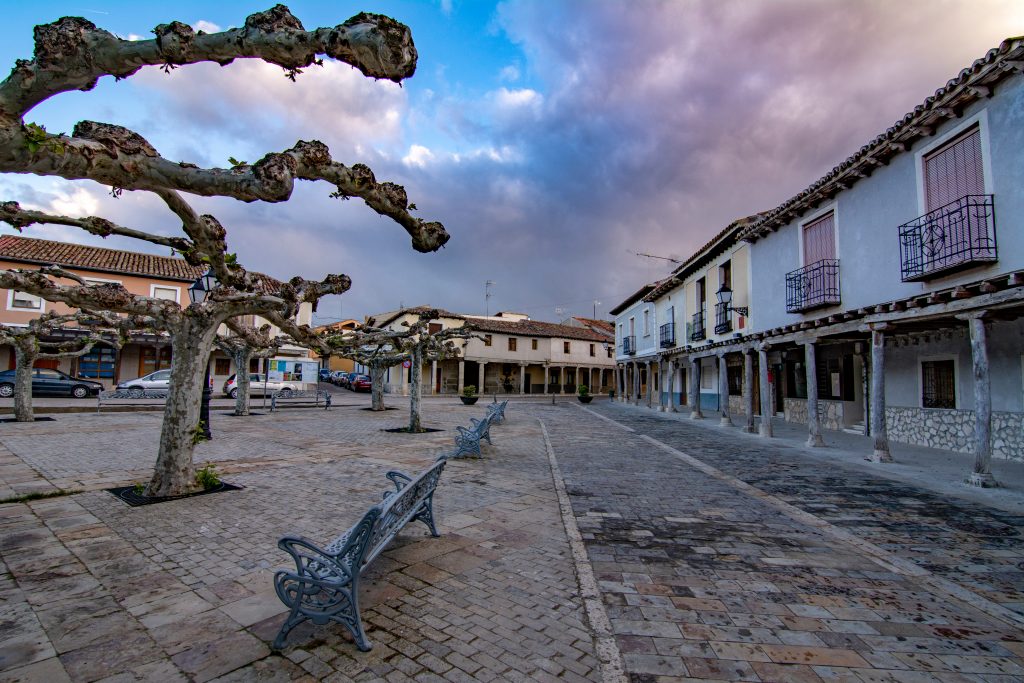 In the area known as Tierra de Campos is located Ampudia, where it seems that time stopped in medieval times. The cobbled streets and its buildings maintain the typical Castilian structure. It has the distinction of being an Asset of Cultural Interest. The most emblematic feature of the town is its 13th-century castle, one of the best preserved. Today, it houses an artistic and archaeological collection. Also worthy of note is the Collegiate Church of San Miguel, in Gothic Renaissance style, together with the several convents and monasteries in the town. 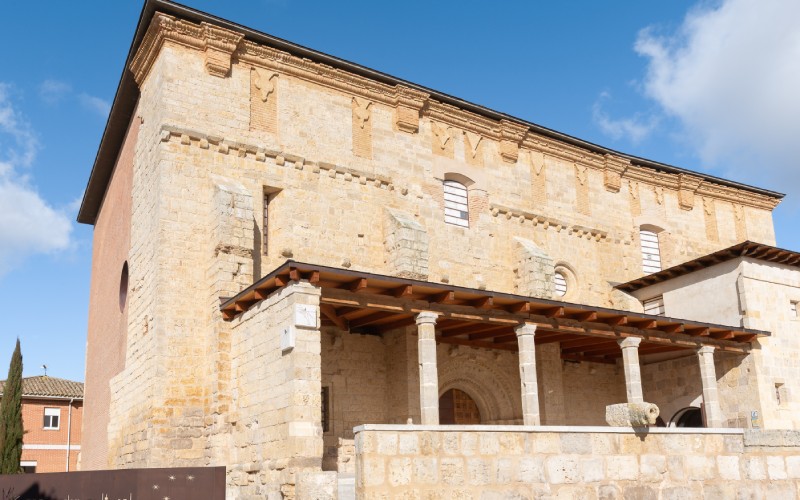 Undoubtedly, Becerril de Campos cannot be missing in this list. It is considered one of the most beautiful villages in Spain. Its streets and buildings have a great charm. It has an extensive collection of ruins. It stands out for its ecclesiastical-artistic wealth, as in the Middle Ages it had up to 7 churches and 8 hermitages. It is known for being one of the jewels of the Renaissance in the province. Despite the fact that in several monuments only the remains are preserved, there is still a lot to visit. The Museum-Church of Santa María is the most emblematic building, and there are also modernist buildings such as the Town Hall and the Humilladero. 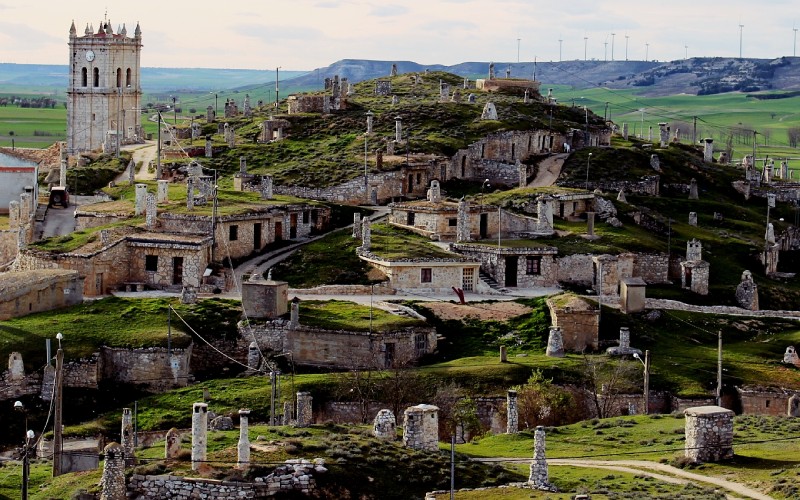 Baltanás is located in the region of El Cerrato, in the old Valley of Atanasio. Although it is one of the prettiest villages in Palencia, it is also one of the least popular, perhaps because many are unaware of its great monumental and natural heritage. It stands out for its wine cellars, the Hospital of Santo Tomás and the Church of San Millán. The whole village has a peculiar architecture. Its houses are located on the mountainside and its curious chimneys are in the middle of the streets. Many claim that Gaudí was inspired by them for the design of La Pedrera. 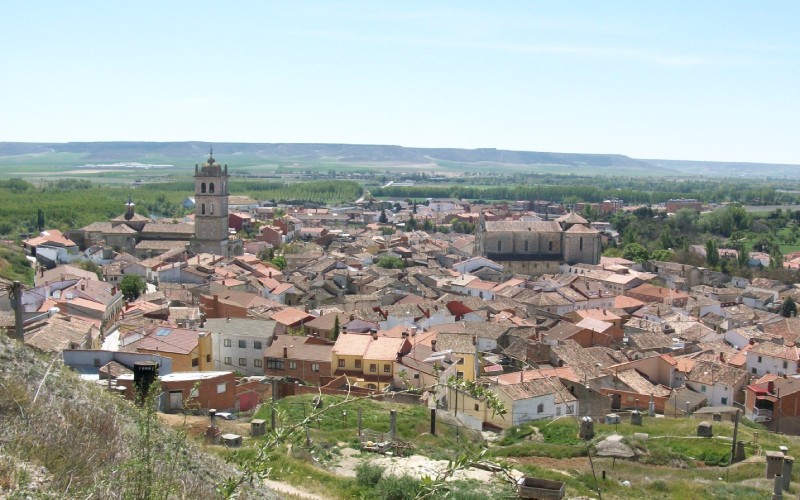 Dueñas has been a Historic-Artistic Site since 1967. Despite its small size, it has many places of great interest. Due to being a crossroads, this town has experienced important historical events. The remains of its old fortress are no longer preserved, but walking through its streets it is still possible to appreciate its medieval past.

The Church of Santa María de la Asunción and the convent of San Agustín stand out among its small houses. It is also worth mentioning its beautiful civil buildings, such as Napoleon’s House. A town that is never missing from the lists of the most beautiful places in Palencia, capable of enchanting all its visitors. 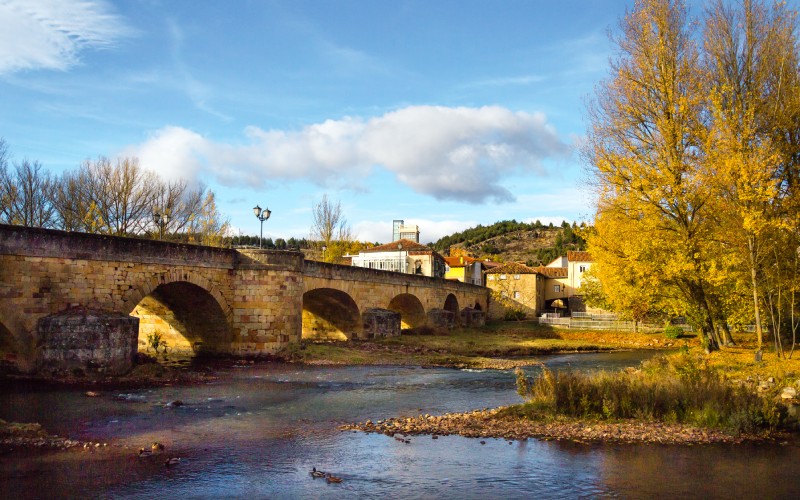 The village of Aguilar de Campoo is a must-see. Located at the foot of the castle of the Peña de Aguilón, it was the nerve centre of the province in the Middle Ages. If there is one thing it is known for, it is for being one of the emblems of the Romanesque architecture of Palencia, as more than 100 coats of arms can be seen in its streets. Declared a Historic-Artistic Site, it has several monuments that are well worth visiting. The Monastery of Santa María la Real, the Collegiate Church of San Miguel and the Church of Santa Cecilia are the most essential ones. Due to its strategic location, it is used as a starting point to visit its beautiful surroundings with a rich natural environment. Nowadays, it is well known for its biscuit industry. 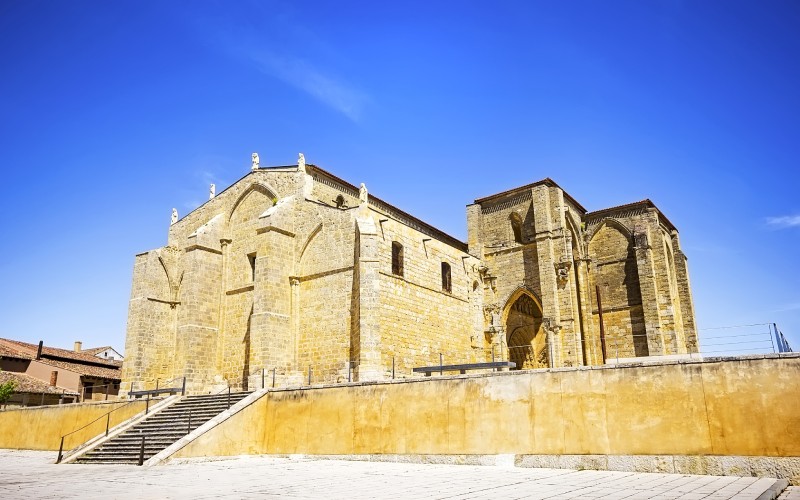 Villalcázar de Sirga is part of the Way to Santiago, it even belonged to the Order of the Temple with a strong affluence in the village. This is not surprising, as it is a town of great fame for the miracles attributed to the image of Santa María La Blanca. The 13th century church, known as the Sistine Chapel of Romanesque Gothic architecture, is dedicated to the Virgin. Its streets and monuments, such as the Palace of the Counts of Villasirga or the remains of the old Royal Hospital of Santiago, are visited by thousands of pilgrims and are the legacy of the great influx attracted by the Way. 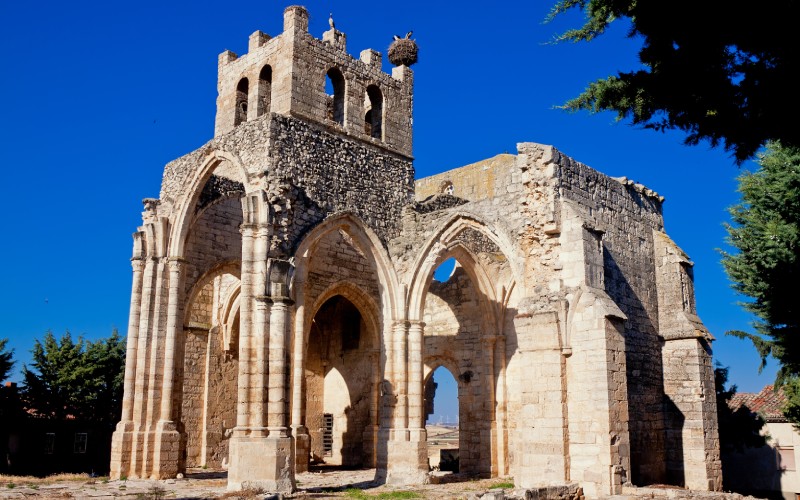 Palenzuela is one of the great hidden gems of the province. With only 200 inhabitants, it is known for its Celtiberian necropolis. This remote village is located in the region of El Cerrato and, despite its small size, it preserves a rich historical heritage. One of its main attractions are the ruins, proof of its past importance. The ruins of the Church of Santa Eulalia stand out, with its pointed arches and crenellated tower still standing. During the tour of its medieval old quarter it is possible to enjoy the Church of San Juan Bautista, as well as its ancestral homes with emblazoned facades. 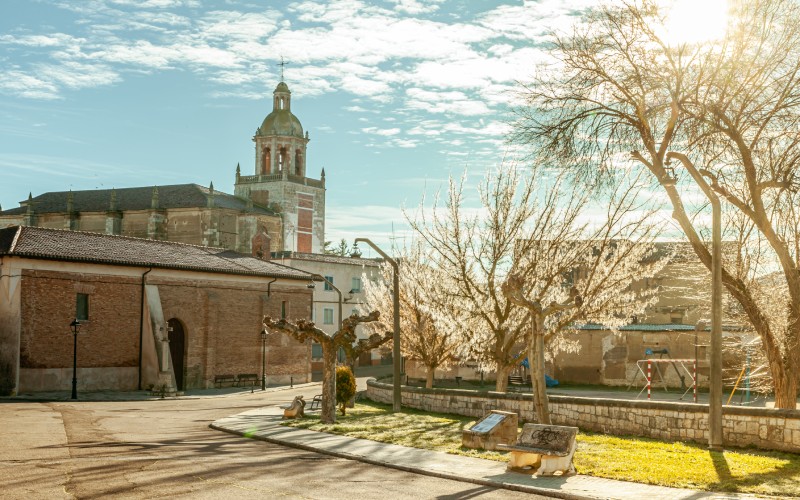 Carrión de los Condes is an authentic medieval town. This is still reflected in its old town, its beautiful streets and many of its monuments. It is one of the most important towns on the ancient pilgrimage routes to Santiago de Compostela. It has a great artistic and historical heritage thanks to the coexistence of Jews and Christians over the years. The most striking places, declared an Asset of Cultural Interest, are the monastery of San Zoilo, the Church of Santa María del Camino, which houses the valuable Pantocrator, considered one of the most important Romanesque works. A mandatory stop on any route through the province. 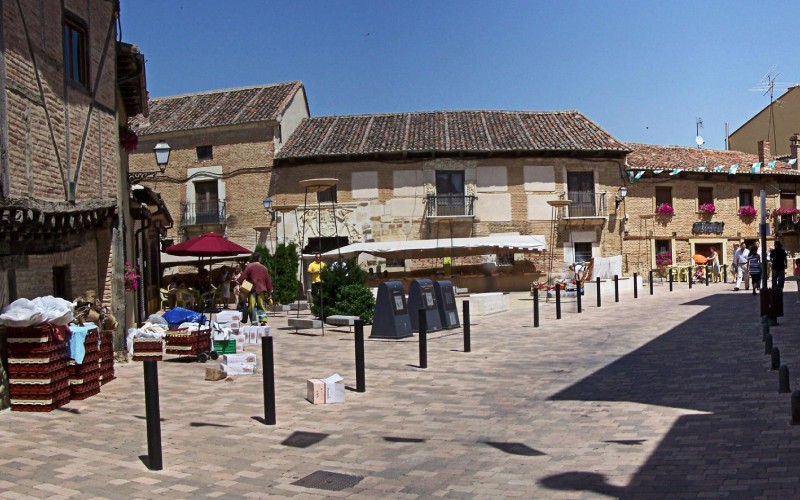 Saldaña was declared a Historic-Artistic Site in 1996, thanks to its peculiar architectural heritage. The Plaza Mayor of Saldaña stands out due to its wooden arcades. It even has the popular Casa Torcida, one of the most photographed places. The masterpiece is the Manor House of the Marquis of Valdavia and the Ruins of the Castle. The great attraction of the village is to wander through its streets and enjoy the old houses. Don’t forget to try the famous Ciegas de Saldañas doughnuts, which are finger-licking good! 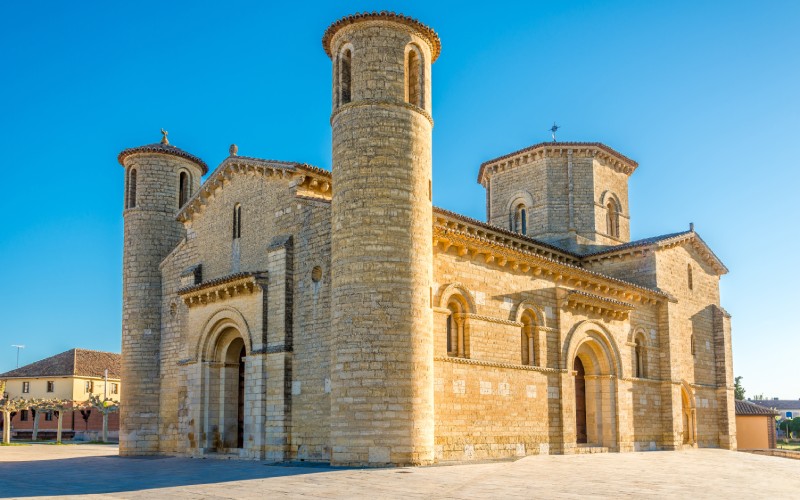 Frómista has been declared the ‘capital of Romanesque architecture in Palencia‘ and a place of passage that opens its doors to pilgrims on the Way to Santiago. In addition, it has been influenced by several cultures, being possible to enjoy some vestiges of the Arabs.

The village can be discovered simply by strolling through its charming streets and being surprised by its places of interest. This leads to its most representative churches, all of which are of great heritage value. Among the great concentration of religious temples, the churches of San Martín, San Pedro and Santa María stand out, whose walls keep medieval Christs and some legends. 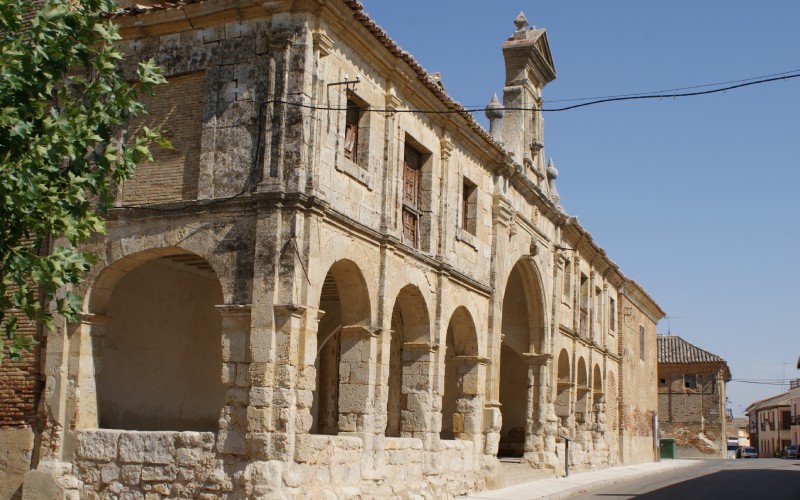 Declared a Historic Site, the village of Fuentes de Nava is one of the most beautiful villages in Palencia. It is located in the area of La Nava-Campos Norte, an area of great importance for the protection of birds. The combination of its natural surroundings with its historical heritage makes it a must-see in the province. Today, it is still possible to enjoy the remains of the old wall, some 17th century palaces and its modern town hall. It is worth mentioning the Church of Santa María, this National Monument is known for housing a great example of Mudejar art inside. Palencia has many villages that will transport you to a dream.